What up fools?  Welcome to Wrestling Do-Overs, where I'll take a famous pro wrestling card or angle and reimagine it the way I would've booked it.

Today I'll be talking about WrestleMania IV, which took place March 27, 1988 at Trump Plaza in Atlantic City.  This show is best remembered for the first-ever WWF Title tournament which saw Randy "Macho Man" Savage win four matches to become the new Champion.  Now all that is great, but the show itself from a wrestling standpoint, well.....kinda sucked.  They tried to cram sixteen matches on a four-hour PPV, only one of which lasted more than twelve minutes (that being a terribly dull fifteen-minute draw in the first round).  There was simply too much going on and not enough time for any of the individual matches to properly deliver.

So I'm going to overhaul the card and present it the way I think it should've gone down.  Before I do though, let's look at the card the way it actually transpired: 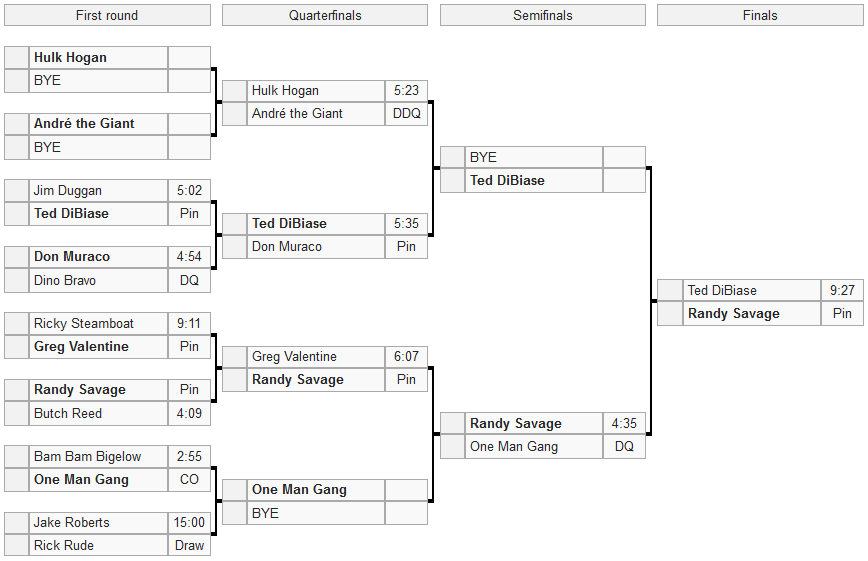 See what I mean?  There just wasn't enough good wrestling going on, and even the tournament final/main event was an overbooked nine-minute mess when it should've been a potential Match of the Year.

So first off, let's change the 14-man tournament to an 8-man.  Now I know what you're thinking; but Justin, Hulk Hogan and Andre the Giant are supposed to get a bye into the second round!  And they still do; Hogan and Andre are automatically entered into the tournament, whereas the remaining six competitors have to win qualifying matches on WWF Superstars of Wrestling in the weeks leading up to the show.


Hulk Hogan vs. Andre the Giant - How they only gave this huge threequel five minutes is beyond me.
Ted Dibiase vs. Jim Duggan - This probably still wouldn't be much of a match but Duggan was a pretty big star so I'm keeping him in.
Randy Savage vs. Ricky Steamboat - Look, I know they were both babyfaces at this point but how do you not allow this rematch to happen?  Savage was so white-hot there's no way Steamboat would take away his fan support.
Jake Roberts vs. Rick Rude - Their feud-igniting angle was taped prior to WrestleMania IV but aired afterwards, so as a result the match was a heatless, excruciatingly dull fifteen-minute draw when it should've been a fast-paced, violent slugfest.

The six men who failed to qualify get added to the Battle Royal, replacing Sam Houston, Sika, Hillbilly Jim, Danny Davis, and The Killer Bees.  Having a bit more star power, including two superheavyweights, would make this match more intriguing.

The show opens with the Battle Royal as planned, and it boils down to Bad News Brown, Bret Hart, and Bam Bam Bigelow.  Bret and Bad News team up to toss Bam Bam out, and the match still ends the way it actually did, but runs about thirteen minutes instead of ten.

Next up is the Intercontinental Championship match: The Honky Tonk Man vs. Brutus Beefcake.  There's now more time given to this match to breathe and HTM retains after a DQ at the nine-minute mark. 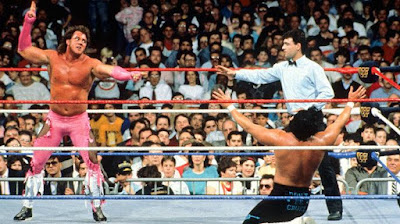 The tournament begins with Ted Dibiase vs. Jim Duggan.  This goes down similarly to how it actually did, but instead of only getting five minutes it gets eight.

Next up is the eagerly-awaited 'Mania 3 rematch, Randy Savage vs. Ricky Steamboat.  These two once again blow the roof off the place in a streamlined, 13-minute thing of beauty.  Savage wins a nailbiter with a small package.

Jake Roberts vs. Rick Rude is next, and these two archenemies immediately go crazy pounding the crap out of each other.  The referee has trouble keeping control, and after a wild 7.5-minute brawl, Rude steals a victory with a foot-on-ropes rollup. 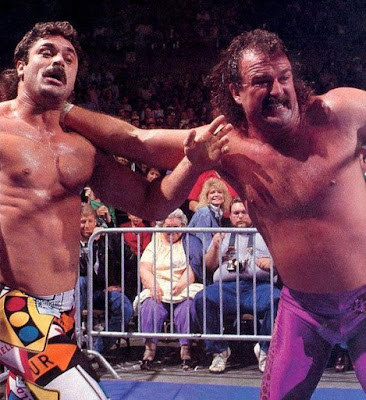 In the final first-round match, it's the two former Champions - Hulk Hogan vs. Andre the Giant - finally locking up for their rubber match.  It's a real shootout that goes back and forth several times.  Finally after nine minutes the action spills out of the ring and both men are counted out.

So Ted Dibiase receives a bye into the finals due to the Hogan-Andre double countout, and the lone semi-final match is Randy Savage vs. Rick Rude

Next up is the British Bulldogs vs. The Islanders - Instead of having Koko B. Ware and Bobby Heenan as actual participants I'm using them as corner men.  This is a blazing twelve-minute tag team match that ends when Davey Boy powerslams Tama and goes for a cover.  Heenan tries to climb into the ring but is pulled to the floor by Koko.  Haku then comes up behind Koko and superkicks him, knocking him out.  The referee is distracted by all this, and while all four legal men are brawling in the ring, Heenan slides a foreign object to Tama, who knocks Davey Boy out for the pin.

Then we get to the big power vs. power match, Ultimate Warrior vs. Hercules.  In real life this got a lousy four minutes.  Here we'll give them eight, but the result is the same - Warrior wins by pinfall. 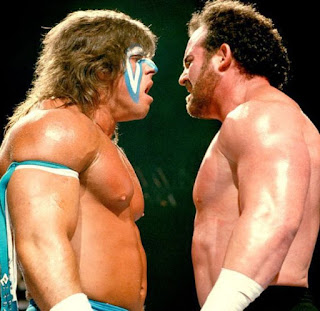 The semifinal tournament match is next.  Randy Savage vs. Rick Rude is a helluva good back-and-forth bout where Savage barely ekes out a win.  At the eleven minute mark Savage reverses a Rude Awakening into a short-arm clothesline, followed by a kneedrop and the Flying Elbowsmash from the top rope.

Next is the Tag Team Title match - Strike Force vs. Demolition.  This can pretty much go unchanged as it was one of the few good matches on the card in real life.  Demolition wins the tag belts.

In the finals we still have Randy Savage vs. Ted Dibiase.  As in real life Andre and Virgil accompany Dibiase, but after the first four minutes of constant interference Elizabeth runs to get Hogan, who chases both of them off with a chair, and plants said chair in the middle of the aisle to stand guard and prevent them from returning. 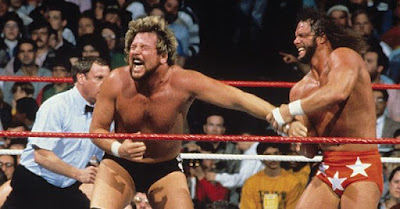 The match then settles into the awesome athletic display we all expected from these two.  Finally at the 17:30 mark, Savage counters the Million Dollar Dream by backing Dibiase into the corner, bouncing off the ropes, and nailing a clothesline.  He then ascends the turnbuckles and soars to the mat with the Elbow, scoring the three-count.

So there it is, a nice streamlined, 11-match WrestleMania card with three excellent Randy Savage bouts instead of four mediocre-to-bad ones.

7. The Islanders pin The British Bulldogs at 11:39

8. The Ultimate Warrior pins Hercules at 8:01

With that you end up with almost exactly two hours of bell-to-bell wrestling, which is just right for a four-hour WWE PPV.  Look at this lineup and tell me this wouldn't have been light years better than how WrestleMania IV actually turned out.  We might all be including 'Mania IV in the all-time greats discussion.

Agree?  Think I'm full of shit?  Sound off in the comments section below!