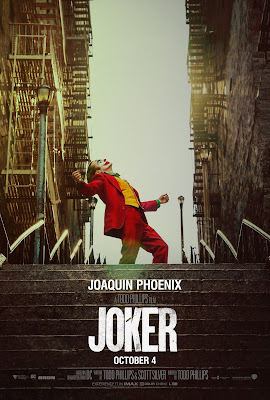 Todd Phillips' Joker is one of the more tangibly uncomfortable films in recent memory.  We spend its two-hour running time in intimate proximity with a severely mentally ill fellow named Arthur Fleck, who is either ignored, dismissed or antagonized by everyone he comes in contact with, except for his equally disturbed mother who seems to have, among other issues, Munchausen Syndrome (when we meet him, Arthur is taking seven different prescription meds at any given time).  Fleck works as a clown-for-hire, rented out for store closing sales and children's hospital visits, but dreams of being a famous stand-up comedian, attending open-mic nights and taking hopelessly tone-deaf notes on what plays with a crowd and what doesn't.  He also fantasizes about being discovered by late-night talk show host Murray Franklin (an insensitive Robert Deniro, reversing roles from The King of Comedy, one of Joker's primary inspirations).

Joaquin Phoenix is a realistically terrifying force in this role (bringing to mind his Oscar nominated triumph as off-the-rails PTSD victim Freddie Quell in The Master, as well as DeNiro's troubled lead characters in Taxi Driver and The King of Comedy), unafraid to alienate the audience and push his portrayal into authentically unpleasant places.  I'd be shocked if Phoenix doesn't get an Oscar nod; he is a truly fearless actor and his performance legitimately feels like one of those dangerous immersions that must've stayed with him for weeks after shooting wrapped.

This film works even without the comic book trappings, relying on them only as window dressing while approaching this well-worn mythos from a different angle.  It's like the opposite of the Batman origin.  Instead of a wealthy orphan dedicating his life and unlimited fortune to fighting crime, we have a poverty-stricken outcast lashing out at a system that threw him overboard, inspiring Gotham's like-minded downtrodden to rise up against the wealthy.  While I found the sociopolitical commentary a bit messy and heavy-handed at times, it's nonetheless an interesting approach in imagining how a sociopathic arch-criminal like The Joker would come to be.

The 1981 Gotham City in this film is grimy, seedy and unwelcoming like the NYC of Taxi Driver, made worse by an ongoing garbage strike that's left the streets overflowing with refuse.  Rampant disillusionment hovers over this Gotham like a black cloud, permeating every scene until the tension becomes palpable and oppressive; spending two hours in this environment alongside this character will most certainly not be for everyone.
Joker includes obvious nods to Scorsese films (particularly the two aforementioned Deniro vehicles), but also a bit of David Fincher (two direct Fight Club references - a confrontation in a hotel restroom and a third-act revelation), a few shots that reminded me of early Kubrick, a key scene right out of The Dark Knight Returns, and perhaps even a tip of the hat to the silent classic The Man Who Laughs (the film that inspired the Joker character in the first place).  Phillips wears his influences on his sleeve, but for the most part they remind us of these classic films without distracting from this one.

One of the best "characters" in this film is the strings-heavy score by Icelandic cellist Hildur Guðnadóttir, essentially a film-length funereal dirge that fittingly underscores Fleck's descent into psychosis, paralleling Johnny Greenwood's amazing work on There Will Be Blood.  Austere and spartan, this unforgiving soundtrack is one of the best of 2019.

Much has been made of the perceived political undertones of this film, that it somehow glorifies violence from disturbed loners, but that take simply doesn't ring true once you've seen it.  If Joker is making a statement at all it's that we as a society need to actually provide mentally ill people like Arthur Fleck with the care they need while also addressing the widening wealth disparity; systemically ignoring and/or marginalizing those less fortunate tends to beget violent outbursts.

That said, Joker is the first film in quite a while to really convey an element of danger; a bleak cautionary tale in the vein of Chuck Palahniuk and Bret Easton Ellis, that leaves itself open for multiple interpretations while still paying due tribute to the Batman mythos.  I'd love to see the DC film unit take more risks like this; instead of trying to copy Marvel's shared-universe strategy they'd clearly be well-advised to present standalone, auteured, character-driven films like Joker.  The critical and commercial success of this film certainly seems to point to this approach being their new model, and that's a good thing.  This is easily the best DC film since The Dark Knight Trilogy.