Welp, Dominion 2019 was definitely not on the level of 2018, or 2017, or 2015.  But then those three editions are three of the best PPVs I've ever seen.  Still I have to consider this show, very good though it may have been, as a mild disappointment.  I've come to expect Dominion to automatically be a Show of the Year contender, and this wasn't that.  Fortunately it was a sellout and set up some cool stuff for the future, but I was expecting a grand slam and they only hit a triple. 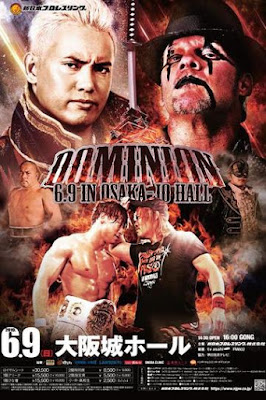 The show kicked off with a Jon Moxley showcase, as he made short work of Shota Umino.  I get why this went under four minutes but I would've liked to see more from these two.  That said, this was a very good four-minute squash, with Moxley taunting Umino during a series of Umino forearms; the veteran toying with the rookie.  Moxley finished Umino with his double-arm DDT and then helped him up post-match, giving Umino his endorsement before announcing his intention to enter the G1.  Between his excellent US Title win over Juice Robinson and this match, the stage was already set for Moxley to prove how much better he was outside WWE.  This was fine for what it was.  **3/4 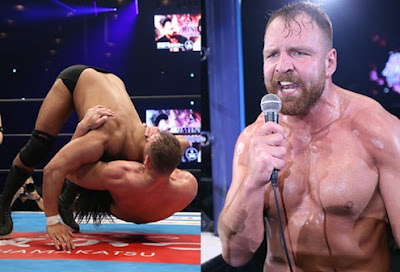 From Moxley's first appearance as US Champion we moved onto Shingo Takagi's first as a division crossover star, as he and Satoshi Kojima beat the tar out of each other.  As a Junior, Shingo had been able to bully and overpower every opponent, but heavyweight Kojima wasn't standing for it and gave it all right back.  These guys had some sick forearm and lariat exchanges and built to a strong finish, with Shingo hitting a Pumping Bomber and Last of the Dragon to get his first heavyweight singles win.  Shingo's run as a company MVP heavyweight was underway.  This was an excellent little fight, particularly for its place on the card.  ***3/4 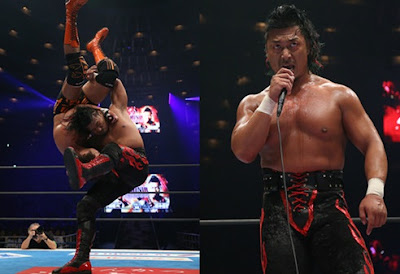 The first of two mongrel tag matches was next, as Minoru Suzuki and Zack Sabre faced Yoshi-Hashi and Jushin Thunder Liger.  These four paired off for most of the bout, Suzuki building to a future match with Liger and Yoshi proving himself as a British Heavyweight Championship challenger for Zack.  Suzuki and Liger's exchanges were fun, while Yoshi wasn't the most credible opponent for Sabre.  But he stole a win here with a magistral cradle.  This was a garden variety undercard tag match.  **1/2

The weakest match on the card was the six-man tag pitting Hiroshi Tanahashi, Juice Robinson and Ryusuke Taguchi vs. Jay White, Chase Owens and Taiji Ishimori.  Usually Tanahashi is able to hide his physical limitations in a singles match, but he wasn't able to do so here.  Tana looked so beat up and tired, his offense wasn't nearly as crisp as usual.  Taguchi's story during this match was his inability to hit the Funky Weapon hip attack.  Ishimori didn't do much here, leaving Owens, Juice and White to carry most of it.  Not much to this.  **

Things picked up with the NEVER Openweight Championship, as Taichi had one of his best matches to date against Tomohiro Ishii, who had what was for him a middling encounter.  This was very solid stuff, with Taichi actually fighting for a change, begging the question, both from the announcers and myself, "Why aren't all of his matches like this?"  After some early stalling and usual Taichi antics, the second half of this match became a more typical Ishii fight, with traded strikes, suplexes and some Taichi submission attempts.  Ishii eventually won with a sliding lariat (after multiple missed attempts) and a brainbuster to recapture the NEVER Title.  This match was very good, a step below Shingo-Kojima.  ***1/2 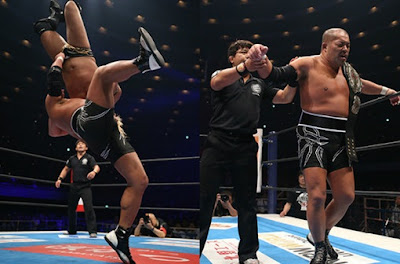 The Tag Titles were next as GOD faced Evil & Sanada in a pretty standard tag match.  There was some good action but nothing terribly noteworthy.  Jado interfered liberally, hitting Evil with a kendo stick from the outside, and later pulling the referee out of the ring to stop him from seeing Tama Tonga tapping to Evil's Scorpion Deathlock.  After a ref bump Jado came in with the stick again but Bushi appeared, spraying black mist into his face and knocking him out with a tope.  Evil & Sanada went for the Magic Killer but Tama broke it up and rolled up Evil, hooking the tights for the cheap win.  This was fine but not much else.  ***

The real meat of the show, as expected, was the final three bouts, starting with an incredible Dragon Lee-Will Opsreay match.  Ospreay stated a few days ago he and Lee intended to steal the show here, and they did just that, with an epic 20-minute Juniors match.  After several minutes of thrilling back-and-forth, Lee propped Ospreay on the outside railing and hit a stunning tope, knocking both guys over the railing and the Japanese announce table.  Absolutely wild spot that was actually safer than it looked.  Ospreay later hit a gorgeous corkscrew moonsault to the floor.  One of my favorite spots, incredibly simple though it was, involved Dragon Lee attempting to run away from Ospreay but getting cut off by a hook kick.  Such a basic but brilliant moment.  Another great exchange saw Ospreay take a reverse rana but counter a Lee running charge with a Spanish Fly out of nowhere.  And of course they did the spot where Ospreay appears to take a top rope rana but lands on his feet and both guys sell the magnitude of that reversal.  Ospreay repeated his finish from his Shingo match a few days earlier, putting away Dragon with a top rope OsCutter/Stormbreaker sequence to once again capture the Jr. Title.  Just a spectacular performance by both men.  ****3/4 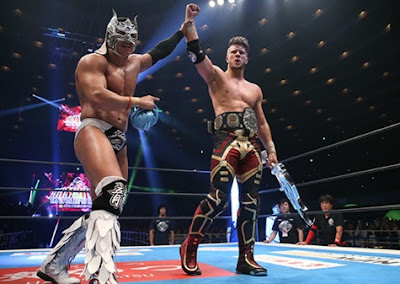 The semi-main event was one of those matches I have to reluctantly give a very high rating to.  At this point I was convinced Ibushi and Naito had a suicide pact, considering how many times they've dropped each other on their heads over the years.  This match was slower paced than their previous ones but the second half featured so many piledrivers, reverse ranas, and other spiking moves it became really uncomfortable to watch.  And don't get me started on that apron German suplex spot.  Like, obviously the plan was for Naito to flip Ibushi all the way over so he landed on the floor on his stomach (ridiculously dangerous as it is), but Ibushi didn't clear the apron and the side of his head caught the edge on the way down, which looked like it folded his head into his shoulder at a 45-degree angle.  Jeezus fucking Christ.  I spent the rest of this match saying "What the fuck are you doing??"  That Ibushi was even able to get up after that, let alone finish a match full of crazy high spots is baffling.  And from a workrate standpoint this match was pretty great.  But after this I didn't want to see them wrestle each other ever again (Fortunately their WrestleKingdom 15 main event was much safer).  Naito kicked out of a Last Ride and countered the Kamigoye with a DDT that Ibushi took like Rob Van Dam.  Naito finished him with Destino to recapture the I-C Title.   ****1/4 for the mechanics of the match, but zero stars for the common sense displayed in getting there. 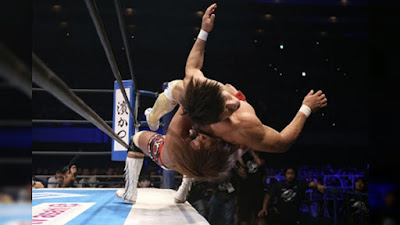 The main event, following two spectacular matches, left me feeling a little underwhelmed truth be told, but there was plenty of good stuff here.  Okada and Jericho worked a very unusual style for New Japan, with Jericho playing the Terry Funk-type heel and Okada altering his usual main event style to match.  Jericho subverted several of Okada's usual spots, such as the clean rope break at the beginning, where Jericho answered Okada's pat on the chest with an eye poke.  Then later Okada tossed Jericho over the barricade and went for his high cross body but Jericho countered with a Codebreaker.   Late in the match Jericho attempted to steal the Rainmaker but Okada ducked and hit the Codebreaker for a nearfall.  Okada avoided Jericho's new Judas Effect and countered another Codebreaker by throwing Jericho over his head.  Jericho went for a sunset flip but Okada sat on top and got a quick pin, echoing the first fall with Kenny Omega last year.  Jericho was pissed and attacked Okada after the bell, using a chair and hitting the Judas Effect.  Guest commentator Tanahashi came to Okada's rescue, setting up a dream match with Jericho, at WrestleKingdom 14.  The story of this match really seemed to be Jericho robbing the fans of a typical Okada main event, with multiple signature spots broken up, a slower-than-usual pace, and an out-of-nowhere finish.  Okada never even hit the Rainmaker and certainly didn't get a post-match promo.  For what they were going for this was very well-done, it just left me slightly vexxed because it wasn't the match I expected.  On balance I'll give it **** because it was well-worked and accomplished what it set out to accomplish.  Arch-villain Chris Jericho pissed off the New Japan faithful and was protected in a loss. 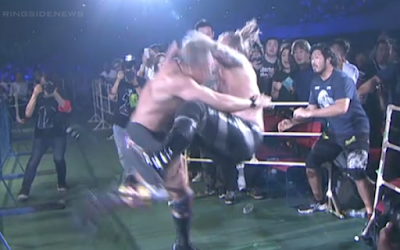 So yeah, Dominion 2019 was certainly not the instant classic show we've come to expect from the annual June PPV, but it was very far from a bad show too.  On the contrary, a show like this on WWE's calendar would be considered one of their best of the year.  For New Japan though it was just good.

Best Match: Dragon Lee vs. Will Ospreay
Worst Match: The six-man
What I'd Change: Tell Ibushi and Naito to stop trying to die.
Most Disappointing Match: As good as it was, Ibushi-Naito was really difficult to watch.
Most Pleasant Surprise: That Taichi can actually deliver a good NEVER match when he wants to.
Overall Rating: 8.5/10

Posted by Justin Enuffa Ballard at 10:39 AM