Welcome to the 8th Annual Pro Wrestling Year-End Awards, here at Enuffa.com, where I celebrate the highs (and lows) of the year that was, inside the squared circle! 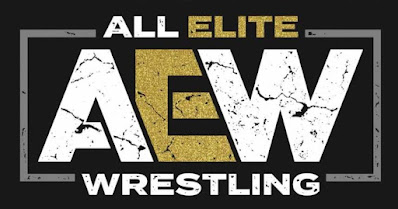 Major Show of the Year
Sorry WWE diehards, you're gonna be disappointed with these awards.  The best major show of 2021 was an absolutely stacked card boasting by my count six (SIX!) **** or better matches, including a blowaway main event that paid off a two-year build and crowned a new AEW Champion.  Kenny Omega losing clean to former tag partner Hangman Page felt like a passing of the torch and the beginning of a new era, finally putting to bed the idea that AEW doesn't reward its homegrown stars.  Between this superb title match, the blistering MJF-Darby opener, a pair of gritty fights in Punk vs. Kingston and Danielson vs. Miro, a wild Falls Count Anywhere six-man tag, and a fast-paced FTR-Lucha Bros bout, Full Gear had something for everyone and then some.  This is the first PPV since WrestleKingdom 10 to get a perfect 10 rating from me, and it's one of two signature events AEW held this year.
The winner is: AEW Full Gear 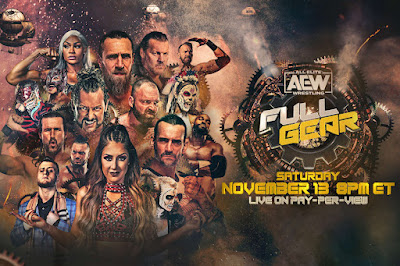 Most Disappointing Show
So unlike 2019 and 2020 where there was one show that really just stunk up the joint, 2021 didn't have a truly bad show, but one WWE offering had such dumb follow-through it tainted the whole event for me.  This was essentially a four-match show that was sorta ruined by two tack-ons.  Two of the scheduled bouts were basically throwaways but both were inoffensive.  The two main matches were epic Elimination Chambers, both of which went exactly as they should have.  In the first, Daniel Bryan outlasted five other guys to earn a title shot against Roman Reigns later in the night.  Great, I thought, that should be a fine semi-main even-- wait, nope, it's happening right after the Chamber.  Yes, the company booked Roman to come right out and start a title defense against the guy who just ran the table for 34 minutes, squashing him clean in 96 seconds to dissolve all the anticipation for Bryan's title quest and rendering the whole Chamber match basically moot.  Not to be outdone though, WWE Champion Drew McIntyre would defend his title in another Chamber in the main event (nevermind that it makes no sense for one champion to have to go through this grueling process but not the other), entering third and putting the matter to bed over the span of 31 minutes, only to have The Miz of all people cash in the stupid briefcase and win the belt.  The Miz.  In 2021.  Was the goddamn WWE Champion.  Miz of course dropped the title to Bobby Lashley a week later, and over the course of the next few months, lost a tag match to a rapper and later got eaten by zombies.  This shit is why the general public doesn't take wrestling seriously.
The winner is: WWE Elimination Chamber 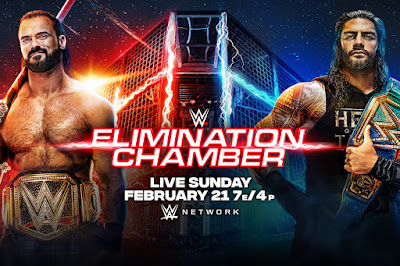 Feud of the Year
There were a handful of very compelling feuds in 2021, the Omega-Page rivalry I mentioned, CM Punk vs. MJF which is just getting started and may well win this award next year, Jurassic Express and Christian vs. the Superkliq, Omega vs. Moxley, etc.  But one major feud recaptured some 80s NWA magic and outshone all other stable vs. stable feuds, and that was Chris Jericho's Inner Circle vs. MJF's Pinnacle.  You see, MJF and Wardlow got to join the Inner Circle after MJF defeated Jericho at Full Gear 2020.  The two biggest mouths in the company trying to coexist made for some very entertaining television, and we all wondered if MJF would end up taking over the team and kicking Chris to the curb.  But no, instead MJF outmaneuvered Chris and his friends, making him *think* that was his plan and then dropping the bomb that he'd formed his own stable, The Pinnacle.  From there it was classic gang warfare, as the long-awaited Blood and Guts match finally made its AEW debut, with Team MJF taking the first big win.  The Inner Circle retaliated at Double or Nothing, evening the score in Stadium Stampede II.  From there the factions broke off into their own little feuds, the most notable of which was MJF vs. Jericho once again.  MJF scored two wins against an injured Jericho but Chris put the exclamation point on their feud at All Out with a (somewhat tainted) submission win.  This months-long rivalry helped establish MJF as a top heel while also reframing Jericho and friends as a badass babyface team.
The winner is: The Inner Circle vs. The Pinnacle 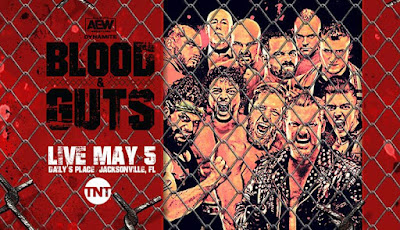 Match of the Year
This was a tough category for me, as it often is.  So many great matches, but only one can win.  AEW presented no shortage of classics, from Omega-Page to Omega-Danielson to Page-Danielson to MJF-Allin to Bucks-Luchas, and so on.  WWE's best matches included Belair vs. Sasha, Roman vs. Edge vs. Bryan, the men's Money in the Bank, and Edge v. Rollins.  But once again I have to go with a New Japan offering.  Despite suffering numerous roster setbacks this company still found room to absolutely crush it in a few of their marquee matchups.  Will Ospreay and Shingo Takagi had a stunning 44-minute war at Wrestling Dontaku, Kota Ibushi and Will Ospreay had an epic Sakura Genesis war, Ibushi and Tetsuya Naito delivered two classics early in the year, and Kazuchika Okada and Will Ospreay began their feud in earnest with a ****3/4 semi-main at the Dome.  But one match for me captured all the old-school greatness of professional wrestling like no other, and that was the WrestleKingdom Night 2 main event, pitting brand new champion Kota Ibushi against the man who'd defeated him three times in 2020, Jay White.  These two created magic in a classic 48-minute, story-driven Flair vs. Steamboat-esque battle, setting a new record for the longest-ever Tokyo Dome match.  Despite numerous attempts to cheat Ibushi out of his new championship, the gallant Golden Star managed to retain, to the delight of the limited crowd.  There were more impactful matches this year, but Ibushi-White was my favorite.
The winner is: Kota Ibushi vs. Jay White - WrestleKingdom 15, Night 2 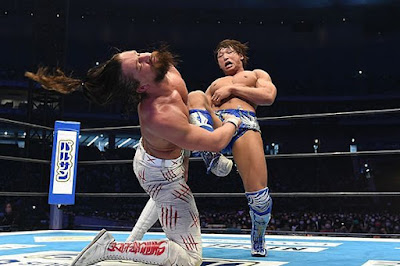 Woman of the Year
Wow for the first time in the eight years I've been doing these awards, someone outside WWE has earned the Woman of the Year trophy.  This charismatic anti-hero started the year as a full-on villain, but slowly earned so much fan respect and goodwill that she gets cheered in most venues despite still being an arrogant jerk who cheats a lot.  A lights-out match on Dynamite proved she could hang in a brutal and bloody no-DQ environment (she did a bladejob to boot, something I don't think I've seen a female wrestler do before), and she racked up a slew of wins to finally earn a title shot at Double or Nothing.  There, in a strong 17-minute bout in front of a capacity crowd, she made the vaunted Hikaru Shida tap out, ending Shida's record-setting year-long reign.  This budding superstar is the closest thing I've seen to a female 1997 Steve Austin, in terms of getting roundly cheered despite her heel tendencies, and I expect her AEW Women's Title run to continue well into 2022.
The winner is: Britt Baker 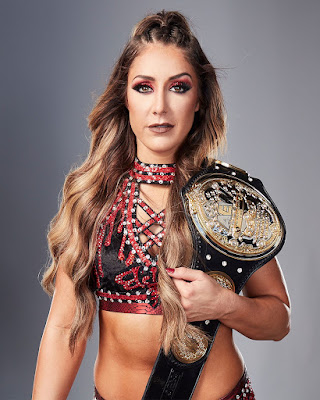 Tag Team of the Year
Man, these guys are in the middle of a Midnight Express-type run with these awards.  From 2017-2019 they took home the trophy and were only interrupted once, by FTR last year.  But they're back on top after dominating the AEW tag ranks for most of 2021 and then delivering stellar in-ring performances even after losing the gold.  By my count, of the eleven AEW PPV events thus far, Matt and Nick Jackson have stolen the show at seven of them.  That's staggering.  Currently along with longtime buddy Adam Cole they're feuding with Best Friends, but I have a feeling that when Kenny Omega returns from his various injuries we may see the original three Elite members do battle with Cole and his Undisputed Era pals (assuming Kyle O'Reilly makes the jump to join longtime partner Bobby Fish).  And if that happens, look the fuck out.  Anywho, this tandem won and lost their tag titles in two of the greatest tag bouts I've ever seen.  They stand alone atop all the great tag teams in 2021.
The winner is: The Young Bucks 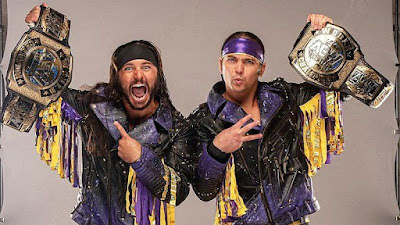 Wrestler of the Year
There are a few people deserving of this award in one way or another.  Each of the big three companies had one star who either by necessity or by design really pulled through and proved themselves a leader.  For NJPW it was Shingo Takagi; though it wasn't planned that way, Shingo stepped up in the absence of two other top stars and kept the prestige of the company's top title intact.  For WWE it was Roman Reigns, who was booked so dominantly against so many different opponents it's hard to imagine anyone in the company being positioned to credibly succeed him.  But Roman has grown into his top heel role quite admirably and while his matches aren't always my cup of tea, he's earned more than a few stripes as a ring general.  But for me it's AEW's locker room leader who most deserves this award.  For roughly eleven months this star held the company's top championship, and while he didn't defend it as often as his predecessors, when he did it, it was a big deal.  Not only that but he collected belts in several other promotions, always managing to draw better in those companies than they drew without him.  And in November, despite reeling from multiple nagging long-term injuries, he insisted on honoring his Full Gear main event commitment to properly put over the next man in line for the title (delivering a five-star performance to boot).  That is the measure of a true locker room leader.  This guy's early-2022 return to action can't get here fast enough.
The winner is: Kenny Omega 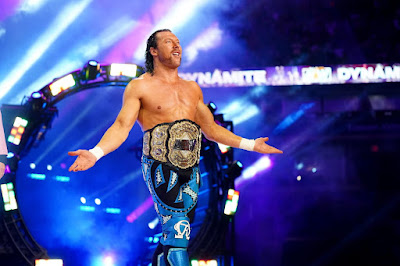 Thanks for joining us for yet another wrestling awards "ceremony" here at Enuffa.com.  Before you go though, check out my unofficial awards history dating back to 1987, the first full calendar year for which I was a fan.....
1987