This Sunday it's the 94th Annual Academy Awards, and unlike last year's COVID edition, this one should feel a lot closer to normal.  Thank god for that, last year's show was pretty flat and forgettable, particularly given the order in which the trophies were doled out.  Let's get back on the clock, shall we? 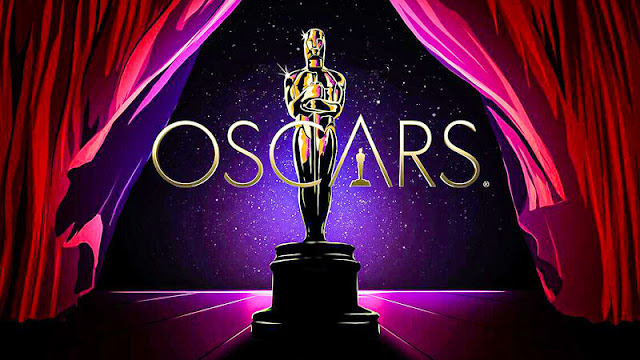 I've only seen half of the Best Picture nominees so far, but I'm hoping to add at least a couple more before the weekend.  We'll see.
Best Picture
Belfast
CODA
Don't Look Up
Drive My Car
Dune
King Richard
Licorice Pizza
Nightmare Alley
The Power of the Dog
West Side Story
Justin: Anywho, the field this year is quite varied, particularly in the all-important Best Pic category, where we have drama, mystery, sci-fi, satire and a musical.  I like it when numerous genres are represented, one of the benefits of up to ten nominees being considered.  Of the five films I've seen (Dune, Licorice Pizza, Nightmare Alley, The Power of the Dog and West Side Story), I think my sentimental favorite is Dune, being a huge fan of both Frank Herbert's complex sci-fi universe and Denis Villeneuve's superb first-half adaptation.  As for which film was actually the best of the five, I think I'd go with Guillermo Del Toro's atmospheric, intense noir remake Nightmare Alley.  As for which film is going to win, I'd say it's between the longtime odds-on favorite and Golden Globe winning The Power of the Dog, Jane Campion's oppressive western drama, and the recent PGA winner CODA, a dramedy about growing up with deaf parents.  I could see CODA pull an upset, but I guess I'll go with the safer bet.
Pick: The Power of the Dog
Mike: I've only seen two of the nominees this year (Dune and Don't Look Up) which has been my worst year yet when it comes to movies. I'm not sure how on God's green Earth Don't Look Up nabbed a nomination but whatever. Probably because of the cast. Anyways, this category is a very interesting and close one to watch. The buzz has been tilting in favor of The Power of the Dog but CODA walked away with the SAG and PGA and that's not a bad place to be since only two movies have nabbed both and lost the Best Picture Oscar. The dark horse is Belfast but I don't see that happening. So, let's make our picks just as interesting shall we?
Pick: Coda
Best Director
Kenneth Branagh – Belfast
Ryusuke Hamaguchi – Drive My Car
Paul Thomas Anderson – Licorice Pizza
Jane Campion – The Power of the Dog
Steven Spielberg – West Side Story
Justin: Man would I love to see Paul Thomas Anderson pick up a Best Director award; he's made three masterpieces by my count and his latest offering is another strong entry in a unique filmography.  But Jane Campion has to be considered basically a lock to win this.  And it will be well-deserved; her work here was stunning.
Pick: Jane Campion
Mike: I don't think anyone's stopping Jane Campion from claiming this trophy so let's go on a rant. Has Steven Spielberg become the Meryl Streep of Oscar nominations. The guy re-does a classic film and that's grounds for nomination. Why, because there's dancing and singing involved? Give me a break. After seeing The Master and being completely bored out of my mind, Paul Thomas Anderson can go pound sand as far as I'm concerned. If anyone deserves this Oscar, other than Jane, it's Ryusuke Hamaguchi.
Pick: Jane Campion
Justin: PTA can pound sand??