Michael Drinan is back with his latest column about a little-known movie you should seek out.  So read it, and then DO IT.

Joseph Gordon-Levitt was an actor whom, seemingly by default, everyone loved from “3rd Rock From the Sun” and even more so from the remake of Angels in the Outfield and 10 Things I Hate About You.  Although each of these roles were pretty basic and not out of the ordinary for child actors to be casted in, you could tell this kid had chops.  It was just a matter of time until he found find a role that allowed him to showcase his talent.  He took a break for a couple of years from acting and upon his return, made a conscience decision to be in good movies, which started in 2001 when he starred as Lyle, a teenager who is in a mental institution for violent outbursts.  In 2004, he starred as a gay prostitute who had been sexually abused as a child.  Receiving praise for this role he began to hit his stride and in 2005, in my opinion, really came into his own as an actor and as a leading man...and with that, let me introduce you to Brick. 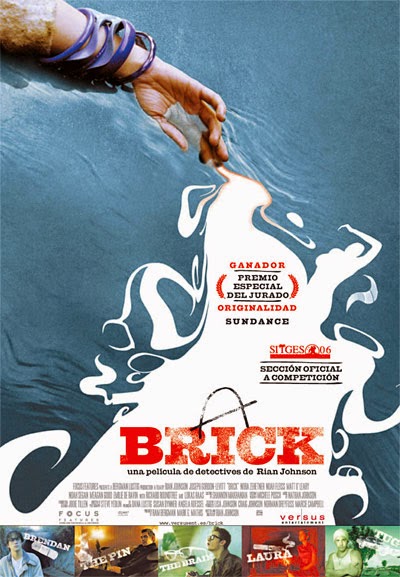 Brick is a story about Brendan Frye (Gordon-Levitt), a teenager who has isolated himself in the wake of his girlfriend, Emily, breaking up with him.  After receiving a call from a frightened Emily, Brendan begins trying to track her down to make sure she’s alright.  Two days later, he discovers her body lying in a sewage tunnel.  He makes it his mission to find out who killed her and why.  What follows is Brendan navigating a criminal underworld that exists of dope runners, women with ulterior motives, a tough guy (who has a great scene with Brendan in a parking lot staring down his speeding Ford Mustang, the highlight of the film) and a confrontation with the town’s Kingpin, played by Lukas Haas (the kid in the Harrison Ford thriller Witness).

This film can be classified as a film noir, and although critics praise it for its originality, its difficult not to notice how much is borrowed from the classic The Maltese Falcon.  Another drawback of the film is that its set in high school with this student navigating the seedy high school underworld that is hard to believe exists.

Once you get past those two things (and it shouldn’t be difficult), the film is a really good one.  Gordon-Levitt plays the part well and the script is exceptional with allowing the story to unfold while still remaining closed, confusing and murky.  The dialogue is exceptional and really moves the story along.  There are a few twists and turns in the plot but nothing that wears your patience thin, it captures your attention and causes you to keep watching to find out all the answers to Brendan’s questions.

In short, while The Maltese Falcon still stands as one of the best film noirs, Brick stays true to the form and is a great example of the genre.  This is the film that Joseph Gordon-Levitt cut his teeth on and came into his own as an actor.  Its reason enough that he was later cast in great flicks such as Inception, Looper and 50/50.  For fans of his, you’ll want to check this one out.

Check out the trailer!
Posted by Justin Enuffa Ballard at 3:32 PM