Today I'll be talking about some slightly-hidden gems given the unenviable task of directly following WrestleMania.  Every year 'Mania seems to play out like a season finale of sorts, with long-running angles and feuds being resolved, and new stories beginning.  But with no off-season, WWE marches right on to the next PPV (formerly In Your House and Backlash, now Extreme Rules) and has to assemble a show that could easily come off as anticlimactic given its position on the PPV calendar.  Some years though, the 'Mania followup PPV has actually outclassed The Show of Shows and presented one or more Match of the Year candidates.  Backlash 1999 and 2000 for example were far and away superior to 'Mania 15 and 16 respectively.  Ditto for Extreme Rules 2011 and 2012.  Not so much for Payback 2017....

Here now are the Top Ten Matches from Post-WrestleMania PPVs. 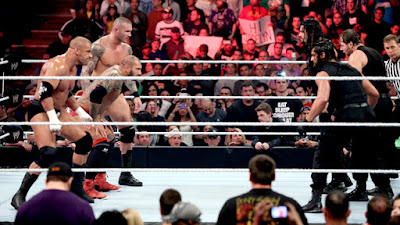 This dream match of sorts was a wild, action-packed example of faction warfare.  The Shield had recently turned against The Authority, and Triple H retaliated by reassembling his most accomplished stable, now consisting of three former WWE/World Champions.  Now I had hoped for an 8-man WarGames-style match including Daniel Bryan and Kane, and I still think WWE dropped the ball by not booking that match after it was so perfectly set up the night after WM30.  That said though, this six-man delivered huge and further established The Shield as the most dominant faction in years. 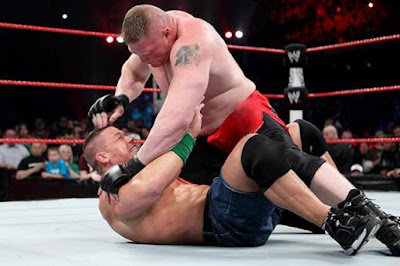 Brock Lesnar's WWE return was an absolutely huge deal.  After an eight-year hiatus Lesnar reappeared on RAW the night after WrestleMania 28 and left John Cena laying in a heap.  A No Holds Barred match was immediately signed for Extreme Rules, and would be the first signature "Brock Lesnar" match, where he employed both pro wrestling and MMA techniques to create a unique, big-fight atmosphere.  The match began with Lesnar brutally bloodying Cena with hard elbows to the forehead, marking the first WWE use of significant "color" in several years.  This groundbreaking fight showcased a dominant Lesnar performance until the very end, when Cena evened the playing field with a chain and got a shocking (and in retrospect terribly ill-advised) win over the returning Beast.  It took some time for WWE to properly use Lesnar during his post-UFC run (His record after one year back was 1-2!), but fortunately they soon remembered that Brock Lesnar is supposed to destroy everything in sight, and worked much harder to preserve his drawing power. 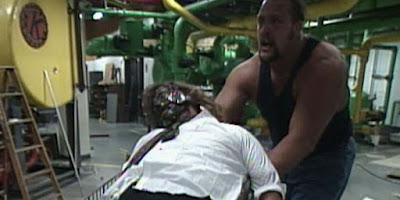 After a tremendously disappointing first-time matchup at WrestleMania XV, Mankind and The Big Show redeemed themselves with this brutal Boiler Room Brawl.  The inaugural Backlash event one-upped 'Mania 15 in every way, and this match was everything the first encounter wasn't.  Mankind brought his typically high pain threshold, taking a brutal table spot and cutting his hand on a pane of glass before escaping the boiler room.  Not only did this match steal the show at Backlash '99 but I consider it the far better of the two Boiler Room Brawls. 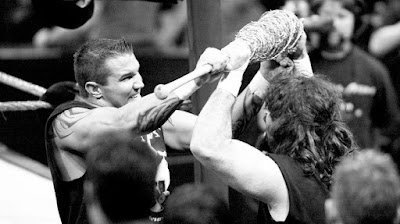 Another Foley classic, this time Mick donned the red & black flannel and trimmed way down to resurrect his original in-ring persona, Cactus Jack.  Randy Orton was just gaining traction as a future main event player, and Foley made sure he looked like a million bucks.  This outlandish, violent Street Fight featured barbed-wire bats, thumbtacks, falls off the stage, and buckets of blood.  The enduring image for me is of Orton taking a bump, barebacked, on a pile of thumbtacks.  Simply one of the most grisly moments I can recall in a wrestling match. 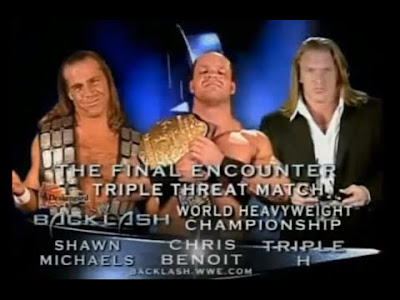 Another one from Backlash '04, this was a rematch of the five-star main event from WrestleMania 20.  While that match felt like an effortless case of everything clicking perfectly, this sadly didn't quite live up to that standard.  Still this Triple Threat is a fun watch featuring three of the all-time best doing what they do.  The finish played into the Montreal Screwjob, as Benoit forced Michaels to tap out to the Sharpshooter, prompting referee Earl Hebner to call for the bell.  Ideally I would've preferred a Benoit-Michaels singles match here since topping the 'Mania 20 bout would've been nothing short of miraculous, but this was just fine.

5. Undertaker vs. Mankind - Revenge of the Taker 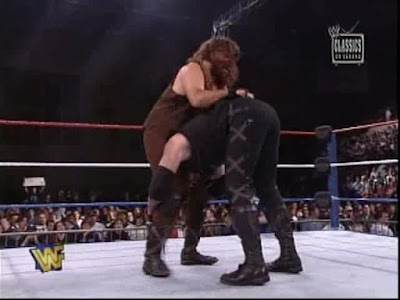 The Taker-Mankind rivalry still holds up as one of the greatest blood feuds of all time.  From 1996-98 these two tore the house down on multiple occasions, and Taker's first PPV Title defense after WrestleMania 13 was their best match to that point.  This was a traditional singles match but it was so chaotic and brutal it felt like a Street Fight.  Mankind would be unmasked for the first time since his WWF debut, and also took one of the craziest table bumps I've ever seen, diving headfirst through the Spanish Announce Booth.  Taker and Mankind would top themselves again with their infamous Hell in a Cell match in 1998, but this was probably their second-best effort. 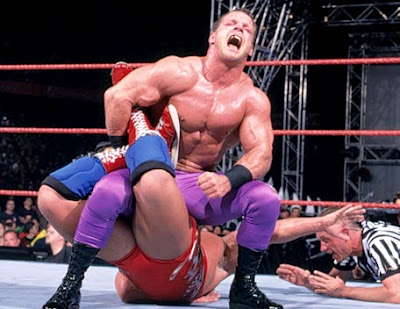 This Submissions-Only Iron Man match is one of the best pure wrestling contests I've ever seen.  Angle-Benoit was one of the great feuds of the early 2000s, and this showcased both men's mat wrestling acumen.  Angle took an early 3-1 lead and the suspense ratcheted up from there as Benoit struggled to catch up.  Finally after thirty full minutes the score was 3-3, necessitating a sudden death period.  90 seconds later Benoit would get the duke with a Crippler Crossface, capping off a masterpiece of submission wrestling. 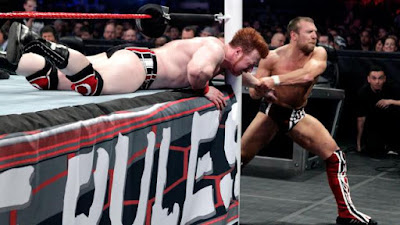 Here at last was the match we should've gotten at WrestleMania 28.  After Vince McMahon's 18-second booking snafu inadvertently made Daniel Bryan a star while dooming Sheamus's main event push, these two were given a chance for vindication at Extreme Rules, in a 2/3 Falls Match.  Bryan relentlessly targeted Sheamus's left arm early on, eventually getting himself intentionally disqualified in the first fall before evening the match with a Yes Lock in the second.  The climactic third fall was an exciting back-and-forth affair until Sheamus once again caught Bryan with the Brogue Kick to retain the World Title.  Simply a show-stealing early MOTY candidate, and the first example of Bryan being effectively used as a top-tier star. 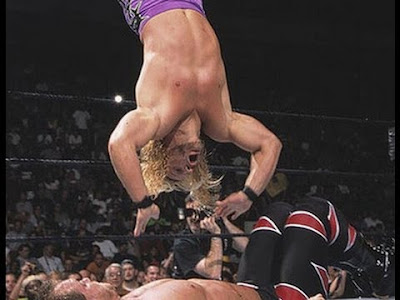 In 2000 the WWF was firing on all cylinders, thanks in no small part to the influx of former WCW workhorses like Benoit and Jericho.  These two feuded for several months that year, and this forgotten classic was probably their best outing until their masterpiece of a Ladder Match at Royal Rumble 2001.  The pace cut in this match was staggering, as the Chrises went balls-to-the-wall for fifteen full minutes before Jericho drew a disqualification by blocking Benoit's diving headbutt with the Intercontinental Title belt.  While the DQ ending may have hurt the match slightly, it's still one of the most inventive I can recall.  On an absolutely stacked Backlash card, this match stole the show. 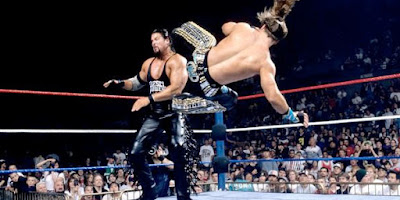 Shawn Michaels' first WWF Title run started off with a bang as he faced his former best friend Diesel in a No Holds Barred melee.  Michaels utilized his typical daredevil offense, while Diesel turned up the brutality, employing chairs, the referee's belt, and Mad Dog Vachon's prosthetic leg.  The most memorable moment though was Diesel powerbombing Shawn through the announce table - a spot I had never seen before that absolutely blew my mind.  This anarchic 18-minute battle upstaged everything at WrestleMania XII and stood as the best match of 1996 until Michaels topped himself that September, in a near-perfect skirmish with Mankind.

That's all for this edition of Top Ten Things!  Comment below with your favorite post-Mania matches!