Welcome to Top Ten Things, here at Enuffa.com, where I talk about things.  Ten things.  The top ten things.  See? Today what's on my brain is the Marx Brothers.  You know 'em, you love 'em.  Groucho!  Chico!  Harpo!  Zeppo (sometimes)!  Born Julius, Leonard, Adolph (later Arthur), and Herbert, the Marxes (along with a fifth brother Gummo) honed their craft for years on the Vaudeville circuit before gaining notoriety with three Broadway hits, and from there they swept the nation as movie stars.  Boasting incredible onscreen chemistry fueled by Groucho's unparalleled wit, Chico's hilariously sleazy Italian character, and Harpo's astonishing gift for pantomime, the Marx Brothers left an indelible mark on both cinema and comedy, with a 15-year film career that spawned numerous timeless classics.

Here are the Marx Brothers' ten best films, according to me.... 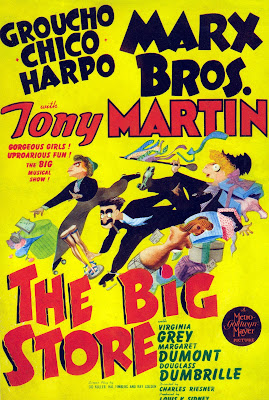 The Marxes' intended final film was this 1941 farce set in a department store whose co-owner has hired private detectives (Groucho, Harpo & Chico) to investigate a plot by the store manager to murder her nephew.  It lacks the urgency and inventiveness of their prime years but does include its share of silly set pieces one would expect from a Marx Brothers movie.  The Marxes would come out of retirement to make A Night in Casablanca in 1947 (after Chico revealed he owed large gambling debts), but The Big Store was billed as their swan song. 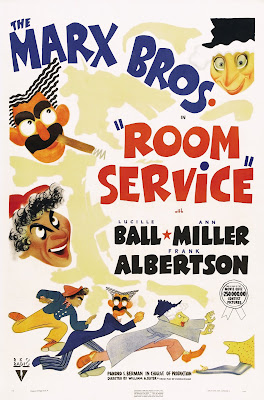 Based on a 1937 play, Room Service was the only Marx film not written specifically for the brothers.  It concerns a stage producer and his ragtag crew going to any lengths necessary not to be evicted from their hotel room before their play's opening performance, and while fairly screwball, features the Marx Brothers at their most restrained.  This was also the first Marx film to abandon the traditional character relationships between Groucho, Harpo and Chico.  In this film Harpo and Chico's characters work for Groucho and the three are in cahoots from the start; in this respect as much as any other, Room Service doesn't quite feel like a Marx film, but it does at least feature a little of their trademark onscreen mischief. 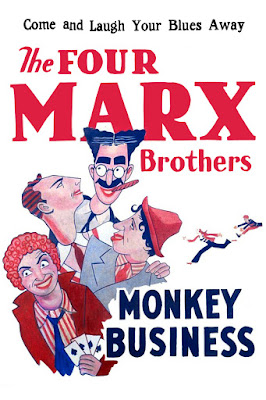 The first Marx film not based on a play was their third overall, about four stowaways who run amok on a cruise ship and fall in with two separate warring gangs.  Monkey Business is a rather odd film, in that a story arc is put into place but multiple threads are left unresolved, such as the protagonists evading the authorities, Groucho's romance with Thelma Todd's character, the aftermath of the kidnapping and rescue of Joe's daughter, etc.  Also notable about this film is the lack of musical numbers other than Chico and Harpo's instrumental solos.  Monkey Business is definitely my least favorite of the Paramount movies and I can't help wondering why they didn't instead make a film version of I'll Say She Is, particularly given the way they shoehorned in the Maurice Chevaille bit from that play.  Still this movie isn't without its charm. 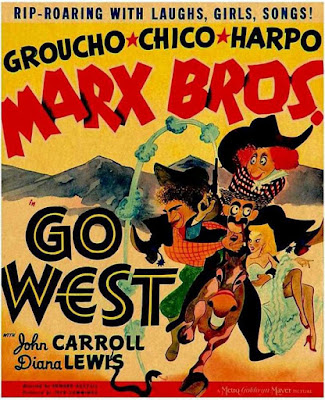 For my money the best of the Marx Brothers' "B movies" is 1940's Go West, about three con men trying to thwart the plans of a real estate tycoon to sell their friend's land to the railroad.  While MGM was clearly no longer prioritizing the brothers' films, Go West managed to somewhat recapture the magic of A Night at the Opera and A Day at the Races, with Harpo and Chico's characters consistently getting the better of Groucho's S. Quentin Quayle, and a thrillingly hysterical train chase climax sequence.  The Marxes' film career was waning by this point, and Go West for me represents their last real hurrah. 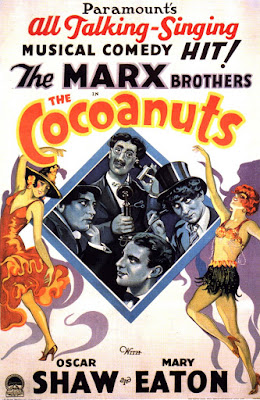 Based on their smash-hit Broadway play of the same name, The Cocoanuts was the first film in the Marx Brothers catalog and one of the earliest talkies (So crude was the sound equipment in 1929 that all paper items shown on the screen had to be doused with water to prevent the microphone from picking up crackling sounds).  The story concerns a beleaguered Florida hotel manager (Groucho) and a jewel theft that takes place in his establishment.  Chico and Harpo would largely steal the show as two bumbling con men who squat at the hotel and fend off the perpetrators of the robbery.  Cocoanuts is uneven but has numerous great sequences, including the brilliantly choreographed theft which takes place across two hotel rooms.  It's the film that launched the Marxes' cinematic dynasty. 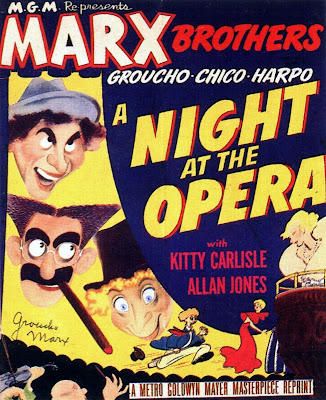 This revered 1935 classic was a major turning point in the Marxes' careers.  After Duck Soup underwhelmed at the box office with its relentlessly flippant political wackiness, the brothers were dropped from their Paramount contract and later picked up by MGM.  Wunderkind producer Irving Thalberg then gave the Marxes an overhaul in an effort to make their films more palatable for mainstream audiences, adding romantic elements and more traditional villains.  The first result of this new approach was an unqualified triumph which renewed the Marxes' popularity, and this film about a business manager and two stowaways helping a young couple find success as opera singers is considered one of the Marx Brothers' absolute best. 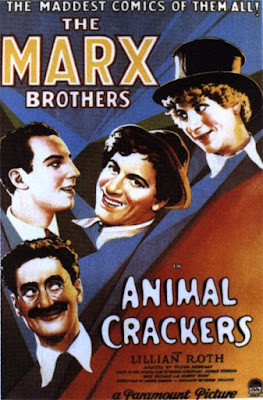 The Marxes' second film was also based on their Broadway show, and features some of the best and most playful dialogue of their entire career.  Animal Crackers quite possibly contains more of their great scenes than any other film.  Its shortcomings lie in the overall story arc, as I always found the painting heist thread rather pointless and convoluted.  But this film has no fewer than a dozen great Marx scenes; from Captain Spaulding's introduction to his scene with Mrs. Rittenhouse and Mrs. Whitehead, to his art discussion with Roscoe Chandler, to Ravelli and The Professor's card game, Animal Crackers is rife with classic Marx moments.  Had it simply been written as a series of comedic sequences at a house party this might be my favorite Marx Brothers film; the need to wedge in some kind of plot rather undermined the film's genius for me.  Nonetheless, Animal Crackers stands as a perennial favorite. 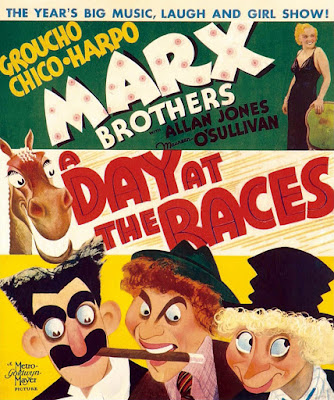 Probably the most expansive Marx film was their seventh, the followup to the classic A Night at the Opera.  Races is set in a Florida sanitarium near a racetrack, where Groucho's Dr. Hackenbush has been appointed chief of staff by an old flame.  Only problem is Hackenbush is a veterinarian, a fact that's in danger of being discovered by a villainous banker who wants to shut the place down.  A Day at the Races is chock full of great Marx comedy routines ("Getta your ice cream!"), plus numerous top-flight musical numbers and a dazzlingly funny climax at the horse track.  This was the second Marx film at MGM, and the brothers' last as A-list comedy stars.  Their producer Irving Thalberg, a champion of the Marxes, died during production and the studio relegated them to a second-rate act for the remainder of their contract. 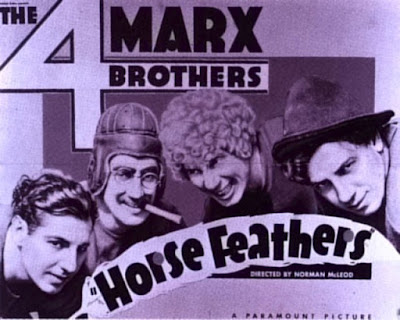 The first Marx film I ever saw was this college-set comedy about a hotly contested football game.  Groucho plays Professor Wagstaff, who has just taken over as President of Huxley College where his son Frank (Zeppo) is a student and football player.  The rival school Darwin has hired two ringers for their team, and in an attempt to woo them over to Huxley, Wagstaff mistakenly recruits Chico and Harpo instead.  The brothers then wreak havoc in the classroom and on the gridiron, climaxing in one of the great comedic sports sequences in film history.  Horse Feathers introduced me to Groucho & company's hilarious antics and its numerous comedic set pieces still hold up as some of their classic material. 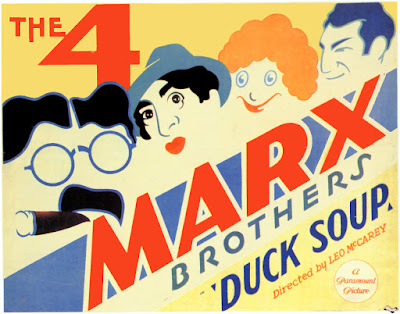 The apex of the Marxes' career for me is this wartime satire, concerning the conflict between two fictional nations, Freedonia and Sylvania.  Sylvania's Ambassador Trentino has hatched a plot to take over Freedonia and marry the country's chief financial benefactor Mrs. Teasdale, while Freedonia's leader Rufus T. Firefly (played by Groucho) attempts to bait Trentino into a physical confrontation so he can force him out of the country.  The various hijinx lead to a full-scale war, and the battle scenes (along with the famous and amazingly hilarious "mirror scene") are the stuff of comedy legend.  Duck Soup lampoons the very notions of nationalism and political bluster, so derisive it actually turned off some Depression Era audiences and led to their migration to MGM.  The film surged in popularity in the 60s however, as anti-war sentiment swept the nation, and has since been hailed as an unmitigated classic; the most irreverent of the Marx films.