Welcome to another edition of Top Ten Things, here at Enuffa.com!  These are ten of my favorite things.  That's how the song goes, right? 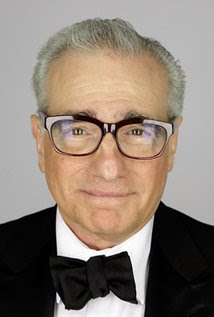 Martin Scorsese.  In my estimation there is no greater director in film history than the diminutive, sickly kid from Little Italy in New York who grew up with a passion for telling stories through the medium of film.  Scorsese spent his childhood looking out the window and observing people and events in his neighborhood, and this predilection for people-watching translated into some of the most incredible filmmaking of all time.  His films are often unforgiving looks at profoundly troubled characters, yet Scorsese finds a way for us to empathize with them, at least enough to want to spend a couple hours in their company.  Many Scorsese films deal with hardened street criminals, hearkening back to the seedy lot he observed in his neighborhood.  But while crime dramas are his bread and butter, Scorsese's filmography also includes religious epics, suspense thrillers, biopics, lush period dramas, and even lighthearted children's fare.  Even after forty-plus years Scorsese remains at the top of his game; in fact his post-2000 output ranks among some of his best work.  To this day any new film of his is event viewing, almost guaranteed to be one of my favorites of that year.

The following are my ten favorite Martin Scorsese films.... 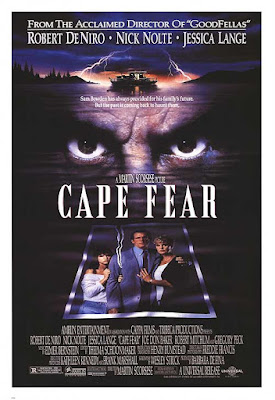 One of Scorsese's rare remakes is this 1991 suspense thriller based on the 1962 Gregory Peck/Robert Mitchum film of the same name.  Peck's role of besieged attorney Sam Bowden went to Nick Nolte, Mitchum's degenerate character Max Cady was played with gleeful menace by Robert Deniro.  The first thing Scorsese did with his version was to change Bowden from a virtuous family man to a morally ambiguous one who withheld evidence in order to get his client Cady convicted, and whose marriage is coming apart due to an extramarital affair and a strained relationship with his teenage daughter.  This change makes the Nolte character and his family even more vulnerable and fits in with the film noir trope of the flawed protagonist.  Deniro's performance of course steals the show; he is musclebound, ruthless, violent, and endlessly persistent.  This Hitchock-influenced genre exercise may not stack up with Scorsese's greatest work, but it did illustrate his ability to take an existing story and place on it his own distinctive stamp. 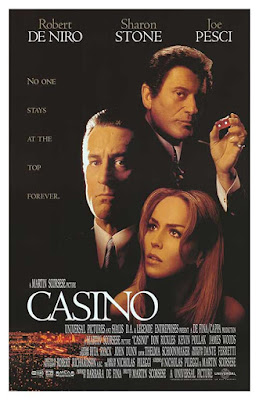 Casino plays almost like a sequel to Goodfellas, or at least a spiritual cousin.  Another epic, frenetically-paced gangster film based loosely on a true story, Casino chronicles the rise and fall of a Vegas gambling empire, once again pairing Robert Deniro with Joe Pesci.  Deniro plays Sam Rothstein, a mob associate brought in to run a mafia-controlled casino, while Pesci plays Rothstein's longtime friend, loose cannon enforcer Nicky Santoro.  Told from multiple narrative viewpoints, Casino shows in violent, gruesome detail the inner workings of 1970s mob-controlled Las Vegas.  Aside from Deniro and Pesci's legendary onscreen chemistry, Casino also boasts an Oscar-nominated turn from Sharon Stone, as Rothstein's materialistic, alcoholic wife Ginger.  Casino didn't quite equal the masterpiece that was Goodfellas, but it was a very worthy, provocative return to Scorsese's favorite genre. 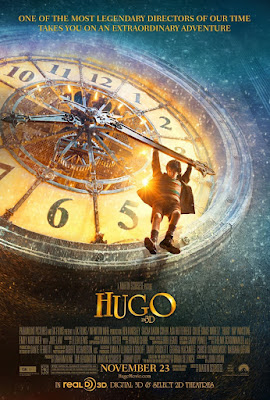 In 2011 Martin Scorsese's filmography took an unexpected 90-degree turn with this family-friendly, light-hearted tribute to the early days of cinema.  Based on the book The Invention of Hugo Cabret, Scorsese's film follows the exploits of a young boy who lives in a Paris railway station.  Hugo's deceased father, an inventor, taught him how to repair clocks and instilled in him a love for film.  He befriends a young girl, Isabelle, whose stern uncle is revealed to be early film pioneer Georges Melies, director of the first science-fiction film, A Trip to the Moon.  After his career declined sharply in the 1920s, Melies became a disillusioned, bitter man who distanced himself from his prior calling.  Hugo and Isabelle work tirelessly to uncover the story of the forgotten auteur so the world can once again embrace his artistic contribution to the medium of cinema.  Scorsese's film is a delightful and colorful romp, made all the more whimsical by the use of 3-D cinematography, used here in a way that enhances the story and intensifies the experience.  Hugo is a rare film that can be enjoyed by any age group; it doesn't talk down to young audiences and it contains complex character arcs that older viewers will be drawn to.


7. The Wolf of Wall Street 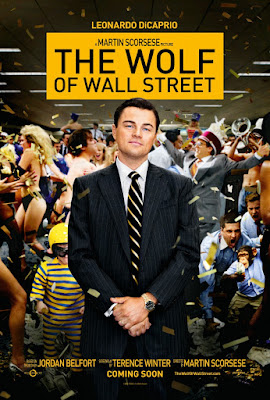 Here's a movie almost as excessive as the world its characters inhabit.  Scorsese delivers yet another epic study of gang life, except that instead of taking everything they want with guns and violence, the characters in WoWS use sleazy sales tricks and illegal trading tactics.  The true story of Jordan Belfort plays as a wildy outrageous dark comedy about sex, drugs, and money.  Leonardo DiCaprio does some of his finest work, embodying a coked-out, womanizing scoundrel we can't help but sorta like.  His right-hand man Donnie Azoff is played brilliantly by Jonah Hill with an assist from a false set of ridiculously white teeth.  At three hours, WoWS is Scorsese's longest (and most f-bomb laced) film, but the time flies by as you watch these self-indulgent, self-destructive characters scheme, party, screw, and fall down hard. 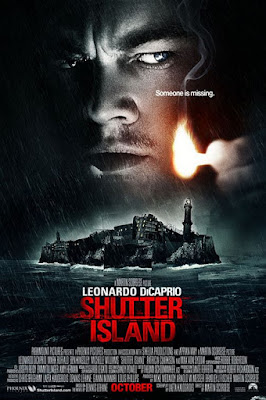 Scorsese delivered a powderkeg of a psychological thriller with his adaptation of Dennis Lehane's Shutter Island, about a US Marshal investigating the disappearance of an escaped inmate from a Massachusetts asylum.  This atmospheric, powerful film features a formidable cast led by Leonardo DiCaprio and Mark Ruffalo as the Marshals, who become lost in the labrynthian asylum and begin to discover that nothing is what it seems.  This is a classic case of the unreliable narrator, as DiCaprio's character begins to doubt the motivations and perception of the asylum's staff, inmates, and even himself.  For those of you who haven't yet seen the film, I won't reveal any spoilers, but the resolution is as appallingly staggering as any movie twist I can remember.  The isolated, claustrophobic setting is one of the most foreboding in film history, and the excellent choice of existing music for the film's score (supervised by Robbie Robertson) enhances the grim mood of the story. 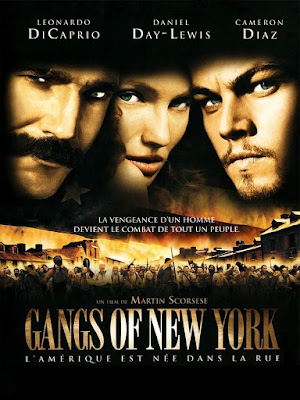 After a pair of coldly received late 90s efforts, Scorsese returned to form in a big way with Gangs of New York, a period piece about the appallingly violent, corrupt climate in 1860s Manhattan, specifically the slum known as The Five Points.  Leonardo DiCaprio stars as Amsterdam Vallon, an orphan whose father was killed in a fight by gang leader and slum lord Bill "The Butcher" Cutting (a spectacular, scenery-chewing performance by Daniel Day-Lewis).  Amsterdam vows revenge and spends years earning Bill's trust so he can kill him in public, during a ceremony commemorating his father's death.  The film's 168-minute running time flies by at an unforgiving pace, hurtling toward the inevitable showdown between the two rival gangs.  Gangs of New York is a sprawling, chaotic film with big performances, breathtakingly realistic set design, and explicitly grisly violence depicting the unrelenting bloodshed on which the city itself was founded. 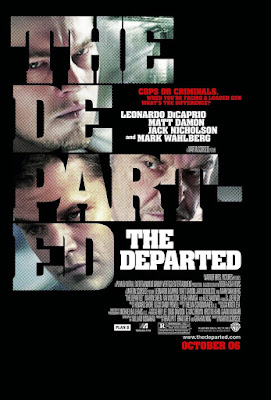 After decades of being snubbed by The Academy, Scorsese finally scored a Best Director and Best Picture Oscar with his 2006 return to the gangster genre, The Departed.  Set in Boston, The Departed is loosely based on the story of infamous mob boss James "Whitey" Bulger, and is also an English-language remake of the 2002 Chinese film Infernal Affairs.  Scorsese and his all-star cast (including Matt Damon, Alec Baldwin, Martin Sheen, Mark Wahlberg, a reptilian Jack Nicholson, and a tour-de-force performance from Leonardo DiCaprio) meld the two concepts together to create one of the all-time great gangster films.  DiCaprio plays Billy Costigan, an undercover cop sent to infiltrate the inner circle of Boston mobster Frank Costello (Nicholson), and help the Massachusetts State Police build a case to bring him down.  However in Costello's pocket is another officer, Matt Damon's Colin Sullivan, who manages to thwart the Department's attempts at every turn.  The screenplay was adeptly written by Boston native William Monahan, who injects the dialogue with great authenticity and stays one step ahead of the audience.  The Departed has all the Scorsese hallmarks - fast-pacing, frenetic editing, morally ambiguous characters on both sides of the law, and wonderfully quotable dialogue (oh, and lots of F-bombs).  This is one of Scorsese's finest works. 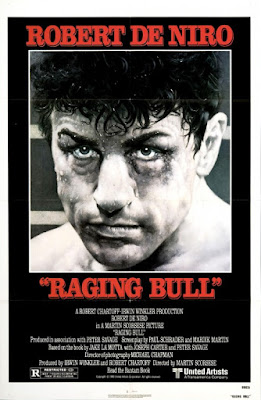 This 1980 biopic about troubled boxer Jake LaMotta ran somewhat under the radar upon its release but has since earned a unanimous reputation as an all-time classic film.  With its expressionistic black & white photography, use of slow motion, and punishingly brutal tone, Raging Bull is a no holds barred look at a deeply flawed man who exorcised his personal demons by beating the shit out of people, including himself.  Deniro gives the greatest and most honest performance of his storied career (garnering one of the most overwhelmingly deserved Oscars in history), resisting the temptation to humanize this violent brute, instead conveying warts-and-all the self-loathing that permeated LaMotta's life and career.  The film boasts two other standout performances: Joe Pesci as Jake's fiery but pragmatic brother/manager Joey, and 19-year-old Cathy Moriarty in a staggeringly precocious turn as Jake's beleagured wife Vicky.  Between these three incredible performances and Scorsese's astonishingly innovative fight sequences, Raging Bull stands as one of the director's greatest achievements. 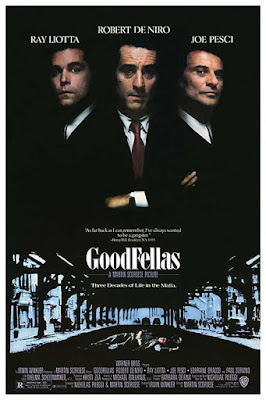 When it comes to gangster films, two stand head and shoulders above the rest in my opinion.  One is Coppola's masterpiece The Godfather, and the other is Scorsese's frenzied Henry Hill docudrama Goodfellas.  From the biography Wiseguy, Goodfellas covers Hill's rise through the ranks of the New York mafia from the mid 60s until the early 80s when he entered the Witness Protection Program.  Ray Liotta gives a tour de force as the central character, narrating his tale throughout the film as he falls in with neighborhood gangsters as a child and becomes a trusted associate of mob leader Paul Cicero.  Robert Deniro and Joe Pesci each give career highlight performances as Jimmy Conway and Tommy DeVito, Hill's two closest friends, while Lorraine Bracco is another standout as Hill's firebrand wife Karen.  Hill and his crew spend years enjoying the fast-paced life of luxury their illegal activities afford them, until it all comes violently crashing down and they each pay the inevitable price in one way or another.  Goodfellas is one of the most unflinchingly candid, intimate looks at mafia life and stands as one of the two definitive films on the subject. 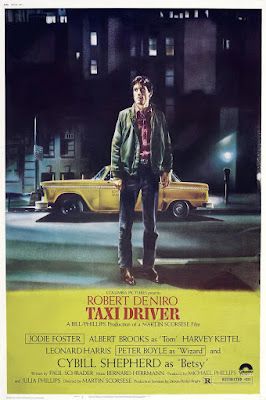 For me no Scorsese film is likely to ever top his 1976 urban masterpiece.  Robert Deniro stars as ex-Vietnam-vet-turned-cabbie Travis Bickle, a lonely, obsessive insomniac with lingering ideas of violence and vigilantism, living in what he sees as a hopelessly decadent cesspool of a city.  Bickle attempts to start a relationship with a political volunteer named Betsy (an aloof Cybil Shepherd) but his crippling social awkwardness gets in the way, and instead he devotes his energy to rescuing an underage prostitute (a stunning performance by then 13-year-old Jodie Foster).  Taxi Driver has a nightmarish quality, punctuated by Deniro's train-of-thought diary narration and various slow motion POV shots that put us inside Bickle's increasingly disturbed state of mind.  As his psyche becomes more and more fractured the film builds toward its ultra-violent conclusion, and based on his choice of target Bickle is hailed as a hero, when he could just as easily have been derided as a monster.  Taxi Driver captures the chaos and disillusionment of the 70s while introducing us to one of the all-time great flawed protagonists, one who embodies the misplaced sense of purpose so many of us grapple with.  This is Martin Scorsese's definitive work and one of the greatest films of all time.

Posted by Justin Enuffa Ballard at 9:17 AM