What's up kids?  Time for another episode of Top Ten Things, here at Enuffa.com, where I do a silly little countdown of.....things. 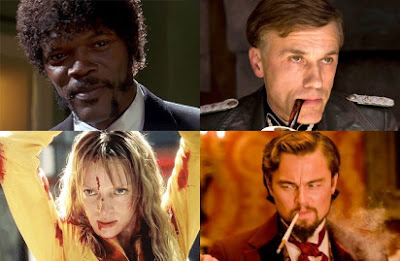 Today it's a list of my favorite characters from the films of Quentin Tarantino!  Mr. Tarantino has a tremendous gift for writing quirky, memorable dialogue in a way that helps establish clearly drawn, relatable characters, many of whom shouldn't be relatable given their occupation or role in the story.  QT is famous for writing scumbags, murderers, thieves and ne'er-do-wells as people we actually want to spend time with; they're regular folks just like us, except that they do awful things for a living.  Sure, there's the occasional legitimate "good guy" character, but almost everyone in Quentin's films is a shade of gray.  Regardless though, his characters are nearly always colorful, eloquent on some level, and above all unforgettable.

Probably my favorite Michael Madsen performance is that of the alcoholic lowlife Budd, self-exiled from his brother Bill's crack team of assassins after a crisis of conscience, but still possessing innately acute survival instincts.  Budd's very posture says volumes - slumped over, defeated, resigned to a destitue life in a shabby desert trailer while working nightly at a local strip club.  The once accomplished mercenary now takes routine browbeatings from his boss and spends his free time getting liquored up and listening to Johnny Cash records, awaiting his fate at the hands of Beatrix Kiddo.  Madsen's work here is wonderfully nuanced and despondent, conveying Budd's sense of self-punishment; wracked with guilt over what he and his colleagues did to Beatrix but still ultimately loyal to his older brother, Budd is the only one on Kiddo's Death List 5 who gets the better of her.

Perhaps the most purely evil character in the Kill Bill saga is the callous, scheming, one-eyed assassin Elle Driver, played with depraved delight by the cast-against-type Darryl Hannah.  She only has modest screen time, but Hannah and QT imbue Elle with tangible malevolence, coupled with a mercenary's sense of honor.  Despite being former teammates with The Bride, it's established early on that Elle and Beatrix have never liked each other, yet they have immense mutual respect as professionals.  We first meet Elle as she plans on disposing of a comatose Bea via lethal injection, offering a peaceful death as a gift.  Later Elle double-crosses Budd by hiding a black mamba snake in his satchel of money, articulating her disgust that he of all people seemingly got to finish Bea off (a great monologue).  Elle is such a fascinating, shrewd villain I think she could carry her own movie.

At first glance, Basterds seems to be mostly about Lt. Aldo Raine and his squad of Nazi-hunters, but the real central protagonist is Shoshanna Dreyfus, who barely escapes as her family is massacred in the first scene and assumes the moniker of French cinema owner Emmanuelle Mimeaux.  Dreyfus manages to keep her true identity secret from the Nazis even as her theater is selected for the grand screening of Joseph Goebbels' new propaganda film, and she concocts a plan to burn the place down with the Third Reich's high command trapped inside.  Played with beautiful subtlety by Melanie Laurent, Shoshanna is one of Tarantino's highly intelligent, crafty female protagonists. 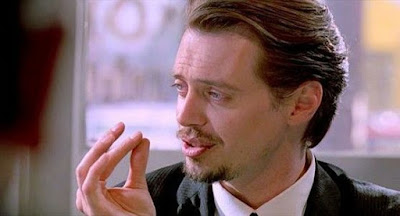 For me the most interesting character from Tarantino's debut film is the nervous but analytical Mr. Pink, by far the most professional member of a team of jewel thieves and the first to figure out that one of his teammates is an undercover cop.  Pink escapes the botched robbery with the jewels and in the end is the only member of the team not to get shot (though it's implied the police nab him).  Steve Buscemi was tailor-made for this character, squirrely, neurotic and persuasive, even in a debate over the custom of tipping waitstaff ("He just convinced me, gimme my dollar back!").  Of Reservoir Dogs' roster of hardened scumbags, Mr. Pink seems the most composed and civilized. 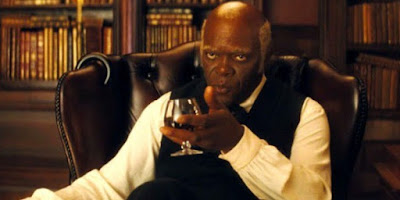 One of the two main villains of Django Unchained is plantation owner Calvin Candie's house slave Stephen, who's only ever known a life of bondage and has thus developed Stockholm Syndrome, driven to protect and nurture his impulsive master at all costs.  Stephen puts on the act of the know-nothing servant but the way he watches events unfold betrays a ruthless cunning below the surface.  While Django and Dr. King Schultz expertly con Candie into considering not only selling one of his best fighter slaves but adding Django's wife Brunhilda to the deal, Stephen is the only who figures out their game, alerting Candie in private that he's being had.  Samuel L. Jackson is palpably hateful and sinister in the role and this is yet another Tarantino character that only he could bring to life. The other main bad guy in Tarantino's anti-slavery pastiche (and the first of two Leo DiCaprio performances included here) is the flamboyant, brutally exploitive, egocentric Francophile slaver Calvin Candie, who fancies himself a sophisticated man of the world but doesn't actually speak French.  Our heroes Django and Schultz devise a plan to rescue Django's wife from Candie's servitude without revealing their marital status, and when Candie finds out he's being conned he delivers a wickedly loathsome speech about phrenology and bondage.  DiCaprio plays Candie as disgustingly entitled but compellingly charismatic, one of two Oscar-worthy performances he's delivered in QT's films.


7. Rick Dalton (Once Upon a Time in Hollywood) 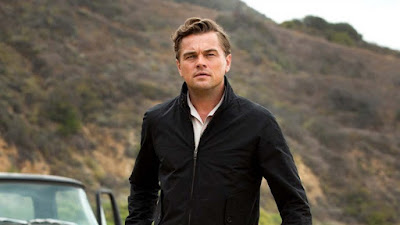 The second Leo DiCaprio character on this list is the lead character in OUATIH, fading TV star Rick Dalton, who was once a household name playing grizzled lawman Jake Cahill on the popular TV Western Bounty Law.  But eight years later, the show having been cancelled, Dalton is relegated to walk-on roles as TV villains who get beaten up by the hero every week.  Partly inspired by Burt Reynolds, the talented but downtrodden Dalton gets talked into starring in a slew of Spaghetti Westerns to revive his career, but also spends his free time with best buddy Cliff Booth.  These two have wonderful chemistry, and Leo plays Dalton as slightly obtuse and quick-tempered but full of undeniable redneck charm.


6. Cliff Booth (Once Upon a Time in Hollywood) 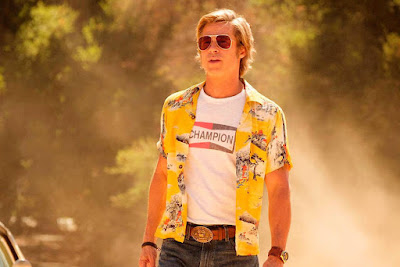 The role that finally won Brad Pitt an Oscar is Rick Dalton's laid-back stuntman/best friend Cliff Booth, a likable, out-of-work fall guy who's now mostly employed as Dalton's gopher and handyman.  Booth may or may not have murdered his wife, and the rumor more or less cost him his stunt career, but he's oddly content just helping out his buddy, in between vegging out in his trailer and smoking acid-laced cigarettes.  Pitt plays Booth as very much down on his luck but always optimistic, affable with most people but scrappy and tough as nails when he needs to be (he's also a WWII hero).  Booth and Dalton make a fantastic lead pair but it's Booth who just slightly steals the show. 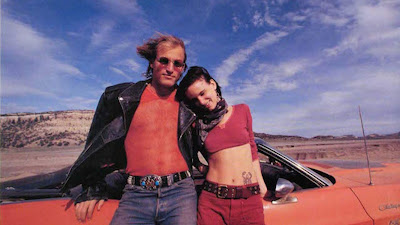 One of Quentin Tarantino's strengths as a writer is his uncanny ability for making an audience sympathize with awful people.  Case in point, the serial killer couple at the center of Natural Born Killers.  Played in twin note-perfect performances by Oscar nominees Woody Harrelson and Juliette Lewis, Mickey and Mallory are written as severely damaged adult children of abuse, whose cruel upbringing has drawn them to wanton violence and destruction.  We shouldn't be rooting for these two, but through their constant exploitation at the hands of everyone they meet (parents, media, lawmen, prison officials), somehow the film's writing/direction coupled with the actors' irresistible charisma make us actually care about a pair of sociopathic miscreants whom the media have turned into some kind of twisted celebrities in the hunt for ratings.  Natural Born Killers is a unique viewing experience, in no small part because of these two fascinating lead characters. 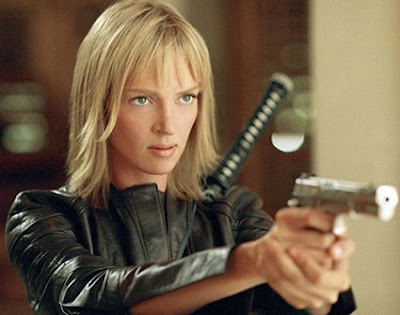 The main character of the Kill Bill saga, Uma Thurman's Beatrix Kiddo is a veritable paragon of feminist action film.  Shot and left for dead by her former lover/boss and his gang of assassins, The Bride is rendered comatose for four years, seemingly having lost her unborn baby in the process, and vows cold, cruel revenge on all of her erstwhile cohorts.  Despite her status as a merciless professional assassin, Thurman and Tarantino make us care very deeply for this wronged character, in part because of her decision to give up her life of violence and attempt to give her forthcoming daughter the best life possible.  Added to that however is Kiddo's sense of honor; even as she endeavors to murder the other murderers, she is duty-bound by her profession to treat them with respect, somehow blending personal vendetta with businesslike devotion to her craft.  Beatrix Kiddo is the role of Thurman's career, and she carries an ultra-violent two-part film about mercenary killers with gravitas and startling empathy. 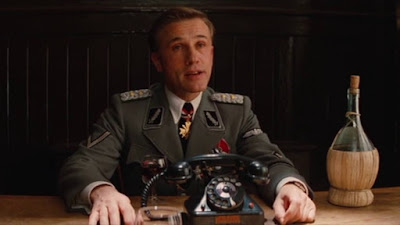 The greatest full-on villain in the QT universe is SS Colonel Hans Landa, played with sinister glee by the wonderful Christoph Waltz, as part good cop, part bad cop, part forensic detective.  Landa is a charismatic, charming baddie who's always got the drop on the heroes (and as it turns out his fellow villains as well).  From his first suspense-ratcheting scene in the LaPaditte farmhouse, amid cordial debates about rats and milk, Landa is constantly in complete ownership of every situation, giving his opponents just enough rope with which to hang themselves.  Waltz is a revelation in the role, conveying Landa's magnetic politeness before switching on a dime to stern strong-arming when it's time to get what he wants.  Landa is one of the great cinematic villains. 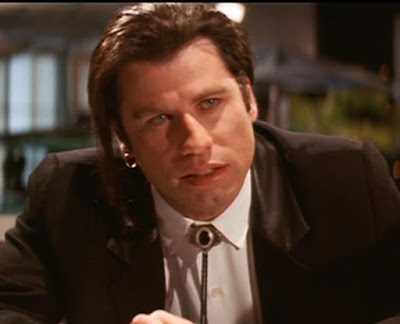 Our final two characters on this list go hand-in-hand, but the freewheeling, slightly dimwitted Vincent Vega has an adventure of his own, sans partner in Pulp Fiction.  Probably John Travolta's greatest character is the heroin-addicted, trigger happy Vega, socially awkward and taciturn unless drawn into a subject he's passionate about.  Vega's natural ineptitude is front-and-center in this film, the impetus for two of the three major episodes.  On his pseudo-date with Marcellus Wallace's wife Mia he leaves a just-purchased bag of smack in his coat pocket and Mia mistakes it for a bit of nose candy (presumptuous on her part to be sure, but who carries that stuff around in his coat pocket?), overdosing and necessitating a trip to Vincent's friend Lance's apartment for an emergency adrenaline shot.  Then later (or actually earlier) Vincent accidentally shoots associate Marvin in the face, necessitating a trip to other associate Jimmy's house while they deal with the blood-soaked car.  Vincent is one of those foolish criminals always in over his head, but someone you can't help but kinda like/root for, and Travolta's performance is gold. 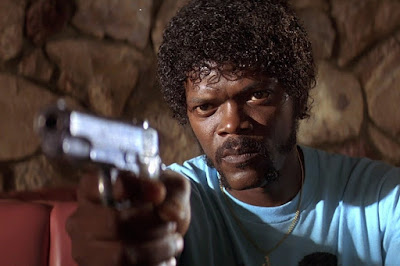 Quentin Tarantino's greatest character in my opinion is the Bad Mother Fucker himself, Jules Winnfield.  Played by the one-of-a-kind movie badass Samuel L. Jackson in a career-defining turn, Jules is the no-nonsense hitman with a heart of sort-of-gold and the brain of a philosopher.  In between shit-shooting talks about Royales with Cheese and television pilots, Jules is the fearsome, bible-paraphrasing, jheri curl-wearing top assassin for mob boss Marcellus Wallace, a cold-blooded killer who'll put a bullet (or several) in your chest just after helping himself to some of your breakfast burger.  But during the course of Pulp Fiction he experiences an epiphany and decides it's time to hang up the mobster life and be a humble peacenik.  Jules is a walking contradiction, forceful and intimidating one moment, pensive and unassuming the next.  No one but Jackson could possibly have played this role, and no other Tarantino character is as compelling or enduring as Jules.


That's my story and I'm stickin' to it.  Hope you enjoyed perusing some of QT's most memorable characters.  Comment below with your list of favorites!

Posted by Justin Enuffa Ballard at 11:15 AM