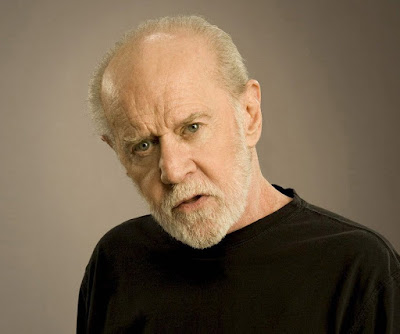 George Carlin.  For me no two words better encapsulate stand-up comedy.  George was a wordsmith, a philosopher, an iconoclast, and above all a goddamn funny motherfucker.  He was in love with the music of language, he enjoyed picking apart human idiosyncrasies and traditions, and he lived to offend.  George consistently evolved with the times, going from a laid-back hippie channeling Lenny Bruce to an angry, filthy old man fed up with society's inability to get out of its own way.  His greatest bits were conceptual and universal; material like "Seven Filthy Words," "Baseball vs. Football," and "Hello and Goodbye" have stood the test of time and are still hilarious now because of their everlasting relevance.  I'd wager nearly every comic working today was at least indirectly influenced by Carlin, the same way nearly every current band owes at least a roundabout debt to The Beatles.  George Carlin, Richard Pryor and Lenny Bruce are pretty universally considered the Holy Trinity of stand-up.

George began releasing comedy records in 1971 and grew such a following that in 1977 he performed an extended comedy special for HBO.  From then on Carlin's HBO specials were event viewing, and eventually his albums were simply audio-only versions of the shows.  His 1970s album output was quite prolific and included gems like Occupation: Foole and FM/AM, but today I'll just be talking about his HBO shows.

So which Carlin specials were the best?  Let's take a look..... 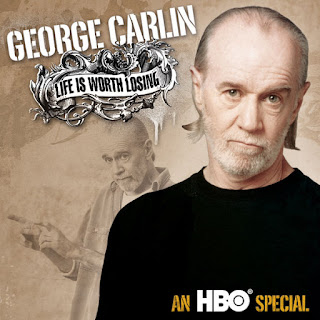 George only had three specials in the 21st century, and this was the second.  He'd been through drug rehab earlier that year and announced that he was nearly a year sober at the time of the recording.  Life is Worth Losing, as the name suggests, contains a lot of material about death and mortality, plus some reworked items originally intended for Complaints & Grievances which had to be cut due to the events of 9/11.  This show has grown on me a lot over the years, particularly the segments about suicide ("That's probably the most interesting thing you can do with your life - end it..."), extreme human behavior ("A buncha people stranded in the wilderness, run out of Pop-Tarts, you gotta eat something.  Might as well be Steve."), and education ("There's a reason education sucks and it will never ever ever be fixed - because the owners of this country don't want that.").  LIWL is probably George at his most gleefully pessimistic. 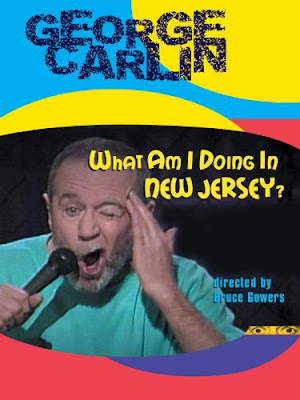 As a teenager this show was one of my two favorites - Jersey was the show where Carlin fully transitioned into the angry old man persona, railing against the Reagan Administration and complaining about traffic.  Most of his work after this was tonally similar in terms of his delivery.  This one hasn't aged as well as I thought it would, partly because of the segments specifically topical to the late 80s, but the material about keeping people alert with bizarre behavior still cracks me up.  "Stand on line at the bank for a long time, and when you get to the window, just ask for change of a nickel..."  The first time I watched this one I was damn near incontinent. 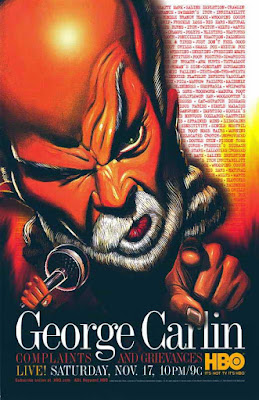 Originally this show was to be titled I Kinda Like It When a Lot of People Die, recorded Sept. 9th and 10th, 2001.  Then the 9/11 attacks happened, and the entire recording was shelved.  George spent three months reworking the set and recorded it that November under the new title, having excised the material that would've seemed inappropriate to the occasion.  The new version of the show takes a while to get going, but the segment about things we pick off our body is hysterical ("You're not gonna spend fifteen minutes peeling a malignant tumor off your head just to throw it away, sight unseen into the neighbor's swimming pool!"), the main portion of the show called People Who Oughta Be Killed dealing with things that annoy him (like motivation seminars, answering machines, and guys named Todd) contains some of his best-ever insults ("Here are some more people who oughta be beaten with heavy clubs and left bleeding in the moonlight...") , and the closing segment about the Ten Commandments is ingenious.  Complaints has to be George's angriest performance. 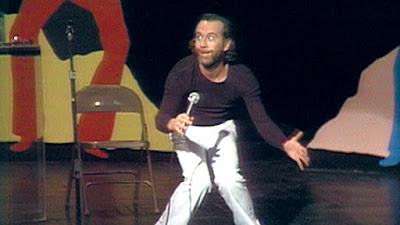 Carlin's 70s material sounds like a totally different comedian.  In his late 30s/early 40s he was much more laid back and sardonic, in contrast with his later dirty old man persona.  The material in On Location was far more about personal and shared experiences and less political.  Stuff about dogs and cats ("Everyone's sitting around the TV....and the dog is licking his balls!"), children ("Just because you're little, they throw you up in the air!"), and one of his classic news headlines segments ("21 killed in 21 gun salute...") was very playful in comparison to his later work.  At 85 minutes, this special was Carlin's longest and recycled much of the stuff from his 1976 On the Road album (the first Carlin record I ever heard).  So this show and its 1978 followup almost feel like the culmination of all his classic 70s material (including the Seven Filthy Words bit) before he moved on to a new phase of his career. 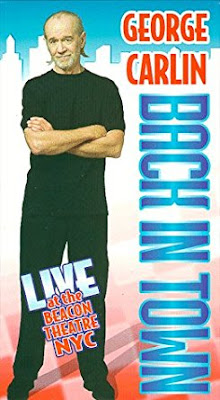 The first Carlin HBO show I watched live was Back in Town.  I was a junior in college living in my first apartment, and we had HBO.  Seeing a Carlin special as it aired was quite a treat, and I later got to catch most of this material in person when I saw him at Hampton Beach the following year.  BiT deals partly with the hypocrisy of pro-lifers ("Life is sacred?  Who said so?  God?  If you read history, God is one of the leading causes of death!"), partly with a scheme to monetize capital punishment ("Beheadings on TV, slow motion, instant replay?  And maybe you could let the heads roll down a little hill and fall into one of five numbered holes.  Let the people at home gamble on which hole the head is gonna fall into!"), and my personal favorite segment talking about weird expressions we all use ("Undisputed heavyweight champion - well if it's undisputed, what's all the fighting about?").  Back in Town is a great mix of George's angry political material and his playful examination of language. 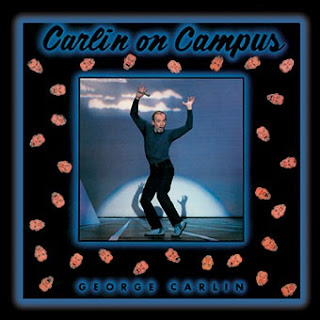 George's early/mid-80s material was an interesting transitional period between the 70s hippie stuff and the 90s anger.  This was probably his goofiest era and in some cases his funniest.  Carlin on Campus included the classic A Place for My Stuff ("Have you ever noticed that their stuff is shit, and your shit is stuff?"), Baseball and Football ("In football you pay a penalty.  In baseball you make an error.  Whoops!"), and an early version of his piece about driving (later expanded in the New Jersey show).  And it famously closes with his ridiculous sports cheer, "Rat shit, bat shit, dirty ol' twat!  Sixty-nine assholes tied in a knot!  Hooray, lizard shit, FUCK!"  Pure, fantastic goofball material. 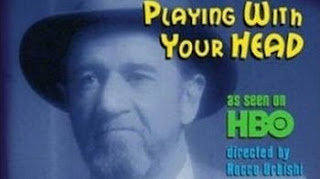 This special is unfortunately a bit inferior to its album counterpart due to some material being cut to make room for a pointless prologue skit.  One of my all-time favorite Carlin segments is the Hello-Goodbye/Love and Regards piece, where he talks about all the strange ways to say hello and goodbye to people, followed by sending your love/regards.  The album version has this piece in its entirety, while the HBO special cut the tail end of it.  The Playin' With Your Head album is probably my favorite of George's, but the HBO show falls a few slots due to the missing material.  Either way, this show is still great, with segments like "Sports," where George dismisses everything but baseball, football and basketball as games or activities as opposed to actual sports ("Sailing isn't a sport, sailing is a way to get somewhere.  Riding a bus isn't a sport, WHY THE FUCK SHOULD SAILING BE A SPORT??").  Also there's a piece about losing things that's hilariously true to life ("I don't even care if I see these items again, I just wanna know where the fuck they went.").  Initially Playin' with Your Head didn't jump out at me, but when I bought the album it quickly became one of my favorites. 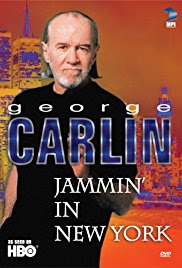 George maintained that Jammin' in New York was his favorite HBO special, and it's a good mix of political humor and an examination of everyday life.  It opens with a piece about the Persian Gulf War, which dates the show of course, but then shifts to little things we all share, like missing the last step in a staircase or grimacing with every sip of grapefruit juice ("WHY DO WE DRINK IT??").  My favorite piece here though is Airline Announcements, which includes one of George's best passages ("Please check around your immediate seating area.....SEAT!  IT'S A GODDAMN SEAT!  CHECK AROUND YOUR SEAT!").  The show ends with an existential monologue about the environment and the self-destruction of the human race, which George always said he looked forward to.  Deep philosophical stuff. 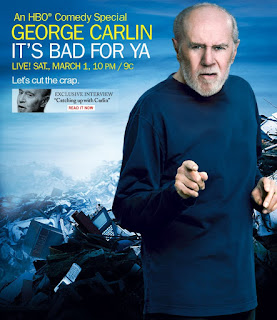 George's final HBO special at age 70 proved that despite slowing a little in his delivery, he could still tear the house down with biting, smartly written comedy.  The theme of this show involved picking apart all of life's bullshit, like how to quickly get off the phone when the other person won't shut up ("Surgery! I'm late for surgery!"), some of the silly things we say when a loved one dies ("Phil Davis died?  I just saw him yesterday.  Yeah?  Didn't help...."), swearing on the bible ("Suppose they have you swear on an upside-down, backward, braille, Chinese bible with half the pages missing.  Does that still count?"), and patriotic/ethnic pride ("Why would you be proud to be American or Italian or Irish or any accident of birth?  You wouldn't say 'I'm proud to be 5'11", would ya?'").  This show eschewed George's angrier material and got back to simply examining human behavior, thus making it more universal and timeless than a few of the shows that preceded it.  Above all it illustrated how sharp he was, all the way to the end. 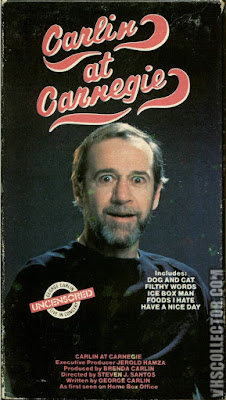 The first Carlin HBO special I ever watched still holds up as my favorite.  Carlin at Carnegie was his comeback show after suffering two heart attacks, and marked a turning point in his career.  Much of the material was the same as his latest album at the time, A Place for My Stuff, and he'd placed a greater emphasis on physical comedy and elastic facials (This was the show that made me realize how gifted he was in this area).  Routines like Have a Nice Day ("When someone asks me how I am I don't say 'fine,' I say 'I'm not unwell, thank you.'"), Dogs & Cats ("Ever notice that whenever your cat jumps up on your lap he sticks his ass right in your face?"), Rice Krispies ("I got into an argument with my Rice Krispies - I distinctly heard 'Snap, crackle, fuck him.'"), and the final recorded performance of the Seven Filthy Words make this special hilariously silly, lighthearted, and timeless.  For me this was George's greatest HBO show.


George Carlin was a national treasure - a prodigious talent who made us laugh while holding up a mirror to society in the hopes that we'd strive for self-enlightenment.  He probably wasn't very optimistic about that possibility, but hey, he tried.  Man, do I wish George were still with us to make some sense out of our current sociopolitical climate.....