Welcome to another edition of Awesomely Shitty Movies here at Enuffa.com, where I take a closer look at a film that is either beloved in spite of its faults or reviled in spite of its virtues, or that simply has such a mix of those two things it's stuck somewhere in between. 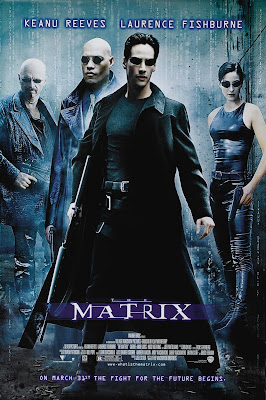 Today's subject is the 1999 cyberpunk action smash-hit, The Matrix!  The brainchild of the Wachowskis, The Matrix was a hip, new take on the humanity vs. machines theme that's been explored extensively in science fiction, driven by a capable cast and revolutionary special effects.  It became a touchstone at the time of its release, having such a profound and immediate influence on the genre that its visual tropes had actually become hackneyed by the time the sequels came out four years later.  In a way it was too big a hit for its own good, and the second and third films were viewed as a pretty massive disappointment (As of this moment I have yet to see the fourth film).  But however botched the follow-through on this saga, the first film remains a visually engaging, conceptually neat sci-fi/action vehicle that could've been even more had the producers not dumbed it down for us popcorn-gorging slobs.

So let's take a look at what still works, and what still doesn't, about The Matrix!

The plot of this movie is super cool.  It's a dystopian future and machines have become self-aware and taken over the world, imprisoning the human race as an energy source while plugging them into a virtual reality designed to keep them pacified and complacent.  Nearly every person left after the apocalypse was born into this matrix, occupying a cryo-pod but under the impression they're all living normal human lives in the late 20th century.  A few resistors like Morpheus got wise and dared to pull back the curtain, hoping to free the others and bring down the machines.  Our main protagonist Neo is a highly sought-after computer programmer/hacker, whom Morpheus believes will be "the one" to free humanity.  It's high-concept sci-fi fun, with lofty, existential themes that are eminently relatable; who wouldn't be able to get behind a small band of heroes trying to save the world?  It's the cinematic embodiment of Rage Against the Machine!

The special effects invented for The Matrix were possibly the most influential of that era.  Nearly every action sequence features "bullet time" effects, where a computer-controlled ring of cameras rapidly spins around a subject, firing off a single frame in quick succession.  When blended with a CG-modeled background, the effect creates the illusion of time stopping as our hero manipulates space-time within the Matrix.  The martial arts scenes made liberal use of this effect and it was unlike anything ever put to film at that time.  It was so successful and popular nearly every action movie for the next few years ripped it off in some form, even when it didn't make sense in context (which was usually the case - see Charlie's Angels or Mission Impossible 2).  The visual effects here were hugely groundbreaking.

The principle cast is first-rate, and the biggest standout is a man whom The Matrix put on the map, Hugo Weaving as the villain Agent Smith.  Smith is the humanoid embodiment of the machines inside the Matrix.  He and the other agents are essentially enforcers, there to ensure humanity's compliance and to protect the illusion.  He gets some really great speeches late in the film, recounting to Morpheus how the machines came up with the Matrix in its current form, as well as his own compelling motivation for wanting to end the war.  Weaving's icy, reptilian performance perfectly conveys the pure logical hostility of the machines and makes for an excellent foil for our very human heroes.  He really steals the show here.

Fishburne delivers the best performance of the protagonists, a calm, idealistic mentor for Neo, teaching him the ways of the Matrix and always pushing him to reach his full potential.  Fishburne initially comes off like a badass-type but quickly eschews convention to reveal a more meditative, Jedi-like side.  In fact he would've made a much better Mace Windu than Samuel L. Jackson.  Morpheus is the role he was born to play.

Most of the good guy badassery is left to Carrie Anne Moss as Trinity, one of Morpheus's most promising proteges, who has been told by the mysterious Oracle that whomever Trinity falls in love with will in fact be The One, the savior of humanity.  Trinity is initially not that impressed with Neo but as he learns she becomes his second mentor of sorts, before realizing she does have feelings for him, and consequently what that means for her.

Keanu will never be confused for an Oscar-caliber actor, but his quiet, naïve charisma is just right for the Neo character, who repeatedly has a hard time swallowing the life-altering information being presented to him.  Reeves makes a very strong, likable everyman protagonist and we quickly get wrapped up in his journey and discoveries.  His fish-out-of-water arc is easy to identify with, as is his classic "hero's journey."

The Matrix is full of ideas about humanity and consciousness.  What makes a person whole?  What is reality?  Can humanity believe in a world without pain, or would it be so utopian it wouldn't seem real?  Is pain an acceptable tradeoff for freedom and knowledge, or is ignorance truly bliss?  These concepts are front-and-center, and make The Matrix more than just a wham-bang action flick.

So all that stuff works splendidly, setting The Matrix apart from many other sci-fi/action films.  Now let's see what kept this movie from being truly great.

Despite all the grand, philosophical concepts present in this movie, unfortunately the filmmakers resolve most of them with fistfights and shootouts.  The characters spend most of their time in a virtual world they're able to manipulate at will, yet the conflicts play out with simple punching and bullets.  If you're hooked into a computer and you're fully aware nothing you're seeing is real, and your enemy is a computer program, why would beating your enemy simply involve beating UP your enemy?  It just feels like such a copout designed to attract big, dumb box office receipts, when these conflicts could've been explored in a much smarter, more original way.

The rules set up in this movie are very convoluted to me.  When you're hooked up to the Matrix the only way out is for someone on the outside to call you on the phone and for you to answer it?  Why can't the person controlling the program simply push a button to wake you up?  And why does disconnecting a person while they're in the matrix kill them?  And why are the agents ever susceptible to being shot?  It's all just very nebulous as an excuse to have shootouts and for characters to be killed off.

What Kinda Life is That?

Look, I get that once you're aware that you're a prisoner of the Matrix you'd want to be "awoken" and freed.  But when the alternative is a shitty, destitute life in this underground city where everything is filthy and drab, is that freedom even worth having?  I guess the long-term objective is for humanity to reemerge once the surface is habitable again, but how far into the future is that eventuality?

While I like the overall concept of this film, some of the elements are awfully close to what happens in The Terminator.  Machines become self-aware and launch an all-out war on humanity and the surface of the planet gets destroyed.  The last vestiges of humankind are forced into abject poverty and hardship while they fight to take down the machines.  Reeeeally similar backstory going on here.

-If the protagonists are fully aware that whatever happens to them in the Matrix isn't real, why does it still kill them?  Morpheus at one point says "Your mind makes it real," but that only makes sense if they aren't already aware that it isn't.  Once the curtain is pulled back they should all be unkillable inside the Matrix, no?  They're all able to defy gravity, so why not death?

-Why is everyone wearing sunglasses?  It's pretty much ALWAYS dark outside, so why is this film the cinematic equivalent of a Corey Hart song?


-After Cypher betrays Morpheus to the agents, he exits the Matrix and begins unplugging his former friends, which somehow kills them?  Why would disconnecting them from the Matrix while they're inside kill them?  Wouldn't it just wake them up in the real world?  Is being hooked up to the Matrix akin to being on life support?

-Why does Cypher disconnect the least important crew members first?  Wouldn't he go for Neo and Trinity right away, since they're the machines' strongest enemies and Neo is supposed to be The One?  This would be like being in a gunfight and picking off the worst shots first.  Chances are while you're shooting at the blind guy, the sharpshooter will blow your goddamn head off.

-Also Cypher subscribes to The Fallacy of the Talking Killer.  Ya know, where the turncoat blabs on and on about why he screwed over his friends, just long enough so one of the good guys (Tank) can stop him before he kills any important characters.  What a maroon.

-Tank's delivery of the word "suicide" always bugged me.  "I want Morpheus back too, but what you're talking about is SU-icide."  He breaks up the word in this odd way and I always hated that take.

-Why is the Oracle so goddamn cryptic about everything?  Just answer the fuckin' questions, lady!


-This isn't a nitpick of the movie itself, but why the fuck was this film rated R??  There's no f-bombs, no R-worthy graphic violence, and no boobies.  I'm at a loss what about The Matrix warranted an R-rating.

There's no denying what a groundbreaking, influential popcorn film this was.  The Matrix set the tone for the next several years, where seemingly every sci-fi/action hero would be clad in black leather (even the X-Men for God's sake) and every fight sequence had augmented motion effects.  This movie was THE hot action film of the new millennium, and for four years we all breathlessly anticipated its sequels.  And then those sucked, and The Matrix wasn't hot anymore.  Pity.

Posted by Justin Enuffa Ballard at 9:08 AM