Our newest contributor Christopher Gillespie is back with another look at an influential Massachusetts band - this week it's Dinosaur Jr.! 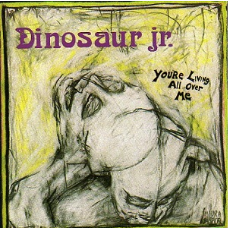 Traditionally considered to be the best of Dinosaur Jr.’s albums, 1987’s You’re Living All Over Me was much more successful than the band’s first album, 1985’s Dinosaur, and is also considered much more influential than their initial outing. You’re Living All Over Me, much like Signals, Calls, and Marches proved to be an album with great importance in the alternative and indie rock scene in both America and Europe. My Bloody Valentine’s Kevin Shields mentioned the album as an influence for their EP You Made Me Realize which was released during the beginnings of the shoegaze genre, and the album is said to have influenced ever-popular American grunge band Nirvana.


Initially called Dinosaur before being sued, the group’s beginning can be found in another band: a hardcore punk outfit from Westfield, MA called Deep Wound. Joseph Donald “J” Mascis Jr. and Louis Knox “Lou” Barlow would first meet as members of Deep Wound, which would eventually breakup in mid-1984. Following this, Mascis recruited Barstow, Deep Wound vocalist Charlie Nakajima, and drummer Emmett Jefferson “Murph” Murphy III into a group called Mogo. However, this group would also disband due to Nakajima launching into an anti-police tirade during their first show on the UMass Amherst campus in September 1984. Mascis, Barstow, and Murphy were appalled by Nakajima’s behavior, and then decided to form Dinosaur without his knowledge with Mascis and Barlow taking over lead singing duties. 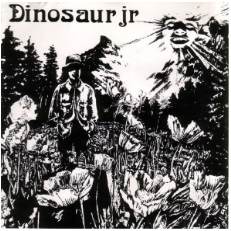 Mascis decided to take up an offer from his friend (and former manager of Deep Wound) Gerard Cosloy, who happened to be in charge of indie record label Homestead Records after dropping out of UMass Amherst. Cosloy had promised that should Mascis ever make a record, Homestead would release it without question. After recording their first album for $500 dollars in a home studio in the woods outside of Northampton, the (originally) self-titled Dinosaur was released in 1985 to mixed reception from critics. The album was all over the place in terms of music styles: the speed of hardcore punk, garage rock, slower and powerful metal riffs reminiscent of Black Sabbath, folk rock, country rock, and gothic music. Most critics enjoyed the album but saw it as uneven in terms of successful integration of all the different musical stylings. The album would only sell 1,500 copies in its first year and was mostly ignored by a majority of the music press at the time.

The band began recording You’re Living All Over Me in New York, with a lot of help coming from Sonic Youth’s engineer Wharton Tiers. A lot of tension came out during the recording, as Mascis had very particular ideas about how the drumming should be and Murph resented the lack of control he had over his own instrument. Once finished, Cosloy was excited to release the new album but Mascis’ reluctance to sign a two-album deal with Homestead led him release the album on California-based SST Records, which Cosloy saw as a betrayal. Once the album was finished, Mascis moved to New York, which left Barlow and Murph feeling alienated from their bandmate.


The album would be released in 1987 and would garner much more attention in the indie rock community. Unlike with Dinosaur, all of the band’s influences merged together in each individual song and therefore was a much more critical success than its predecessor. Following its release, supergroup The Dinosaurs (featuring ex-members of Country Joe and the Fish, Quicksilver Messenger Service, Hot Tuna, Grateful Dead and Jefferson Airplane) sued them over the use of the name, prompting the addition of "Jr." Their third album, Bug, would drop a year later and was very similar to YLAOM but with more melody and conventional song structures. Despite the new album and huge success in the UK music scene, tensions between Mascis and Barlow reached a boiling point after touring in support of Bug, and Barlow was kicked out of the group, going on to form the band Sebadoh around the same time.


The group (minus Barlow) would later sign with major label Sire Records and release their next album, Green Mind, in 1991. The album was essentially a J Mascis solo album, as he played nearly all instruments barring Murph’s drumming on a few songs. Murph would leave the band following touring for the group’s fifth album, Where You Been, and Mascis would release two more albums under the Dinosaur Jr. name (1994’s Without a Sound and 1997’s Hand It Over) before retiring it in 1997. The band would stay dormant until 2005, when Barlow and Mascis buried the hatchet and reformed the group along with Murph to perform on the April 15 episode of The Late Late Show with Craig Ferguson. Since then, the trio have released four albums: Beyond (2007), Farm (2009), I Bet on Sky (2012), and Give a Glimpse of What Yer Not (2016).

Posted by Justin Enuffa Ballard at 9:38 AM