The "first ever" all-women's PPV is in the history books, and WWE managed one of their best main roster PPVs of the year.  Of the seven matches, all of them were at least entertaining, and a few stood out, particularly one match that has to rank high on the list of main roster matches of 2018.  This had the feel of an NXT special and the matches were all pretty different from each other.  WWE needs to make this an annual thing but also should model more of their main roster shows on this one. 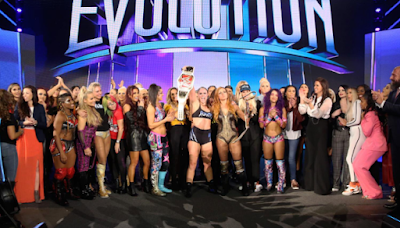 Things kicked off with Lita & Trish Stratus vs. Mickie James & Alicia Fox (subbing for the injured Alexa Bliss).  Given the substitution it was obvious who'd be winning this, but these four worked hard to keep everyone invested, and the crowd ate up everything they did.  Lita and Trish both looked good considering how long it had been since they worked a match.  Mickie was excellent as always, and Alicia sold well, though she missed a pin breakup at one point which looked awkward.  The match went eleven minutes and ended with Trish hitting Stratusfaction followed by Lita's moonsault on both opponents for the win.  Solid, fun opener.  **1/2

Up next was the battle royal, which shockingly turned out to be really well-structured and one of WWE's best battle royals in years.  There was a good mix of current and older talent, everyone got at least a moment or two to shine, the legends were mostly eliminated in the first half, and the crowd was electric throughout.  The match started off with the IIconics talkin' trash to the rest of the field only for everyone to gang up and toss them at the bell.  From there it was a pretty logically worked battle royal, with big spots sprinkled in to keep it from getting monotonous.  It boiled down to Nia Jax, Tamina, Asuka and Ember Moon.  Ember ejected Asuka, marking the first time she'd ever gotten the better of her old NXT rival, then Nia threw out Tamina.  While Ember and Nia struggled near the ropes, Zelina Vega emerged from under the ring and tried to eliminate them both, but to no avail.  Nia pressed Zelina over her head and threw her to the outside on top of Tamina, then proceeded to make short work of Ember to win the match.  The crowd clearly wanted Ember to win this, but they still popped when Nia got the duke.  Very good battle royal.  *** 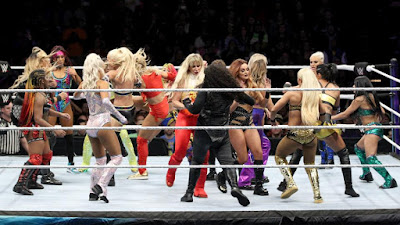 The Mae Young Classic finals was a really well-worked, stiff match that unfortunately wasn't given enough time to make it a classic.  Toni Storm (who WWE better push to the moon because she has IT) and Io Shirai hit each other with plenty of high octane offense.  Shirai hit a moonsault off the top to the floor, Storm hit a German suplex on the apron, Shirai kicked out of Storm's Tiger bomb, went for another moonsault but met nothing but knees, and fell to a second Tiger bomb.  Storm then celebrated with Triple H, Stephanie and Sara Del Ray.  This was very good and showcased both women well, but needed another five minutes to reach **** territory.  Still I'm looking forward to seeing more of these two in NXT.  Both are excellent.  ***1/2 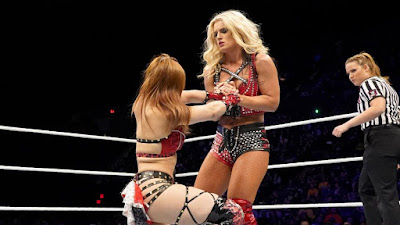 The six-woman tag was next as Sasha, Bayley and Nattie faced The Riott Squad.  Strangely Liv Morgan was spotlighted the most out of the three heels, while Ruby Riott wasn't in the ring much at all.  Liv looked very good here and had some nice heel character moments.  The action was fast-paced and pretty non-stop, with Bayley taking most of the babyface-in-peril spots.  After several false finishes Bayley hit her Macho Man elbow on Liv, followed by Sasha's Eddie frog splash for the win.  This maybe went a little long but it was a fun match and the crowd was into it.  ***

The trilogy of title matches closed the show, starting with Kairi Sane vs. Shayna Baszler, in another stiff fight with a great babyface-heel dynamic.  These two have tremendous chemistry together, with Shayna the despicable bully and Kairi the valiant underdog.  Shayna attacked Kairi's arm early and Sane had to fight from behind basically the whole match.  The action spilled to the outside, where Shayna's Horsewomen pals got involved and eventually cost Sane the match.  After kick by Jessamyn Duke, Kairi fell victim to Shayna's choke, eventually passing out.  This wasn't quite as good as their TakeOver match but it was still very good.  Shayna is a wonderful natural heel champ who could eventually have a great feud with Ronda when she gets the call-up.  ***1/2 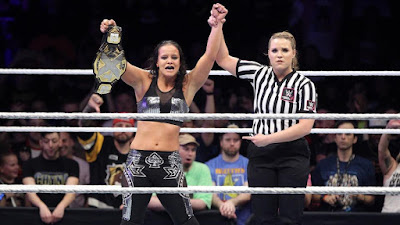 The match of the night went to Becky vs. Charlotte, in an epic, wild brawl that spilled all over the ringside area and involved all the plunder of a TLC match.  Both women went through tables, both took brutal ladder and chair bumps, and both worked really hard to make this stack up against the best men's matches this year.  Charlotte at one point hit a moonsault onto a table but the table didn't break, so she simply set it up again and hit a senton instead.  While it did call attention to something not going as planned, it was a logical way to correct it and didn't detract from the match.  Another great spot that they had to work to earn was Charlotte locking in the Figure 8 through a ladder.  As she was setting it up I thought, "This ain't gonna work," but once she figured out how to do it, the move looked brutal.  The finish came when Charlotte set up a table on the outside with the intention of moonsaulting through it and Becky, but Becky climbed up and powerbombed her from the top rope through the table.  Charlotte failed to answer the ten-count and Becky won squeaky clean.  The crowd LOVED Becky here.  I'm fine with her keeping this character, as she's so much more interesting as a badass bitch, but the company really needs to portray her as an anti-hero instead of shoving her into the villain box.  The audience simply isn't going to boo her.  Anyway, this was one of WWE's best main roster matches this year, and one of the best Last (Wo)Man Standing matches in a long time.  Epic stuff that could've easily main evented any PPV.  ****1/2 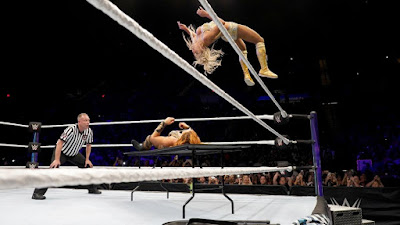 The main event between Ronda and Nikki was about what I expected.  The work was crisp and Ronda ended up selling too much, but at least they used Brie's interference as a reason for it.  Considering Ronda's still pretty green and Nikki doesn't work full-time anymore, this was just fine.  Ronda dominated the early portion, toying with Nikki, Nikki took over after Brie helped her get the advantage, and Ronda came back to take control again.  The finish was very cool, as Ronda countered a top rope move with a flying armbar attempt and then locked in her cross armbreaker for the quick submission.  Nothing amazing, and I'm still looking for that defining Ronda match, but this was decent and the crowd was into it.  Not sure who Ronda moves on to next, maybe Nia Jax?  *** 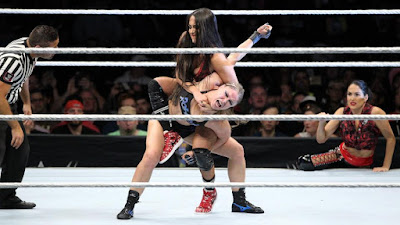 So Evolution had seven good-to-excellent matches, nothing bad, and it was under 3.5 hours.  This has to be the most fun main roster show of 2018, if not the outright best overall.  I hope the company makes this an annual event; it flew by and showcased the robust women's division beautifully.  My only complaint is the MYC needed more time.  But a very easy recommendation.

Best Match: Becky vs. Charlotte
Worst Match: Trish & Lita vs. Mickie & Alicia, but it was fine
What I'd Change: Give Toni vs. Io more time.
Most Disappointing Match: I guess Toni vs. Io just because they're clearly capable of more.
Most Pleasant Surprise: The battle royal
Overall Rating: 8.5/10