The History of WWE WrestleMania: XXVII

What a disappointing bag of crap this show turned out to be....


Oh man, this segment and the next are going to exhume all kinds of buried anger.  Just warning you...

'Mania 27 ranks at #2 on the Most Disappointing WrestleManias list.  Not since 15 was so much potential wasted at the biggest show of the year.  For the first time in several years, three new uppercard heels were featured prominently on the card, the WWE Title match included a first-time champion, and a large contingent of young, rising talent was given some of the 'Mania spotlight.  Then everything went to Hell.

**Note: I did not read any internet wrestling news the day of this show so any last minute card-shuffling was unknown to me when the show started.**

I knew something was wrong right out of the gate when 'Mania host The Rock opened the show with a pointless, meandering monologue that went on for 15 minutes and actually, I sh*t you not, included him leading the fans in a "Wrestle! Mania!" call and answer.  Fif. Teen. Minutes.

Then bafflingly the opening match was the World Title match between Edge and 2011 Royal Rumble winner Alberto Del Rio, in what should've been Del Rio's breakout match.  Instead what transpired was a very good eleven-minute hot opener where #1 of WWE's three new top heels failed to close the deal and went home a loser.

Next was a very solid midcard match between Rey Mysterio and Cody Rhodes that oddly got more time than the World Title match.  But it was a fine contest so I didn't complain.

Third was an 8-man tag that could've been a fun, wild brawl.....had it been given more than 90 seconds.  Yup.  Ninety seconds.  The Corre vs. Big Show/Kane/Santino Marella/Kofi Kingston was given less time than it's taken me to write this paragraph.  Their ring entrances lasted longer than the match.  I can't imagine in my wildest daydreams why this match wasn't simply bumped off the main card.

Up next was another very good match - CM Punk vs. Randy Orton.  Finally Punk would be given a real 'Mania match that went into double digits.  These two told a really great story and delivered a near show-stealer.  Unfortunately as with Punk's 'Mania 26 match, WWE decided to give the babyface the win in the first encounter, making the subsequent PPV rematch unnecessary and devoid of any heat.  Score 0 for 2 for the WWE's new top heels.

Match #5.  Sigh.....  Announcer Michael Cole vs. Wrestler-turned-Announcer Jerry Lawler.  WWE had turned Cole heel months earlier and thus the announce table became a massive, non-stop bickering session for every TV taping.  These two could barely concentrate on whatever match was happening in front of them every night because they were constantly cutting into each other.  Just painful to listen to.  Now I gave this program the benefit of the doubt and thought it would lead to a mildly entertaining 5-minute beatdown on Cole which would really get the crowd going.  Instead we were subjected to nearly 14 minutes of Cole beating up Lawler (?!), after which Lawler made his comeback and won the match, after which the Anonymous RAW General Manager (one of the worst ongoing angles ever) disqualified Lawler due to referee Steve Austin's physical involvement in the match (one of the worst-ever uses of Steve Austin).  Fourteen minutes this match got.


The match of the night was next, as Triple H attempted to end The Undertaker's 'Mania streak, and while full of typical No-Disqualification shortcuts, these two put on a very dramatic, brutal fight with some great nearfalls.  My only complaint about the match itself is that the final ten minutes mostly consisted of big move-two count-rest repeated several times.  Cut five minutes out of this 29-minute bout and you'd have a 4+ star rating.  The match ended with Taker submitting Triple H in the Hell's Gate, followed by Hunter walking out under his own power and the exhausted Taker needing to be stretchered out.  This segment from entrances to exits took about 50 minutes, which was totally excessive. 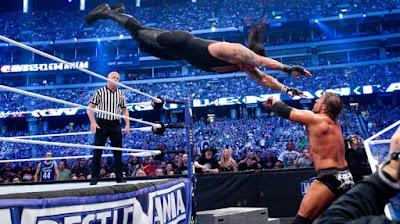 At this point I was very surprised, and sort of excited, that my most anticipated match of the evening, Sheamus vs. Daniel Bryan for the US Title, was going on so late in the show.  I figured it would've been on first or second to get the crowd going, but maybe the company really felt it warranted a later spot on the card.  More on that in a bit.

The next match was a mixed-tag match pitting John Morrison, Trish Stratus, and yet another celebrity non-wrestler Snookie vs. Dolph Ziggler, Michelle McCool, and Layla.  The action in this one was fast and furious, and had they been given 7 or 8 minutes this could've been a very entertaining match.  Sadly it only went three minutes, barely enough for all six participants to get any ring time.  I don't know exactly how much WWE paid Snookie for those three minutes, but I can definitely say they got ripped off.

Suddenly my night and my mood were ruined by what happened next.  The announcers turned their attention to the main event WWE Title match between The Miz and John Cena.

Ummmmmm....What. The hell. Happened to the US Title match???  At this point I scrambled for my cellphone and looked up the latest internet wrestling news, to find that WWE in its infinite wisdom decided to bump Sheamus vs. Bryan to the pre-show.  Let me make sure I am crystal-clear on this: WWE decided there wasn't enough time on a four-hour show for a 15 to 17-minute (including ring entrances) US Title match, but there was time for The Rock to say precisely nothing for 15 minutes at the top of the show and participate in multiple unfunny backstage comedy skits, the 8-man tag that only got 90 seconds of in-ring time plus about five minutes of entrances, and a FORTY-NINE minute Triple H-Undertaker segment.


At this point I was livid (and thinking about this WrestleMania still bothers me for this reason).
Anyway, the main event was next.  The Miz (for whom I had very high hopes as potentially the next face of the company) and John Cena had a middling, awkward 16-minute match that wasn't even RAW-worthy, ending in a double countout.  Then 'Mania host The Rock restarted the match, only to Rock Bottom Cena and allow Miz to pick up the win, thus setting up the following year's WrestleMania main event.  And then The Rock laid Miz out and stood tall over both WWE Title match participants, in the worst WrestleMania ending since Hogan's impromptu Title win at 'Mania 9.

WrestleMania XXVII will go down as one of the most poorly-assembled shows in the company's history.  I can't think of a single PPV with worse time management or booking decisions.  The company bumped a somewhat highly-anticipated match off the card completely to make room for multiple unentertaining non-wrestling segments, gave far too much time to other matches that either didn't need it or didn't deserve it, made two of their rising heel stars look weak while elevating a heel announcer, and presented one of the worst 'Mania main event matches in history.  It seemed the whole purpose of 'Mania 27 was to set up the main event for 'Mania 28, and the biggest show of the year should absolutely never (NEVER) be used just to set up something else.  This event is one of the only times I can remember really feeling cheated out of my money after watching a PPV.

Best Match: Undertaker vs. Triple H
Worst Match: Jerry Lawler vs. Michael Cole
What I'd Change: Holy lord, where to begin.... First, instead of The Rock being the host, make him a guest referee in the main event (which would make his physical involvement and match-restart much more logical), have Sheamus vs. Bryan open the show, have Del Rio actually win the World Title, have Punk beat Orton, cut Lawler-Cole down to five minutes and have Lawler win (or better yet, have Lawler fight Jack Swagger with Cole at ringside), have Cena beat The Miz but then get into a confrontation with The Rock after the match to avoid both main event wrestlers looking stupid.
Most Disappointing Match: Sheamus vs. Daniel Bryan, relegated to a four-minute no-contest-turned-Battle-Royal on the pre-show.  As for the main card, The Miz vs. John Cena.
Most Pleasant Surprise: There were no pleasant surprises on this show, only unpleasant ones.
Overall Rating: 5.5/10