Well WWE had a solid night with the 2020 Elimination Chamber PPV.  Seven matches, none of them bad, a few of them very good, and a main event that helped establish a new star.  There were no Match of the Year candidates or anything, but this PPV was pretty easy to watch and they didn't do anything stupid.  See how easy wrestling is when you don't overthink it? 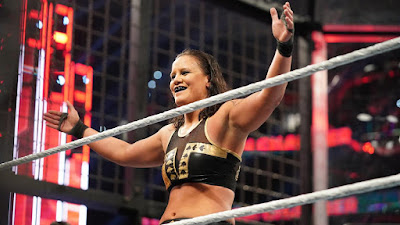 The show kicked off with a pretty great little match pitting Daniel Bryan against his new protege Drew Gulak.  The story coming in was that Drew grew up idolizing Bryan and had learned all his weaknesses, and to be sure, Drew seemed to have Bryan's number for a lot of the bout.  Bryan would go for one of his usual holds and Drew would counter it, leading to spots like the one where they each went for a kneebar and took turns kicking each other in the face to get control.  This match felt somewhat like one of Bryan's old ROH bouts, with more emphasis on grappling and stiff strikes.  I wish Bryan would go full-on American Dragon again.  The scariest spot was Drew hitting a release German suplex, which Bryan took by jumping as high as he could and landing basically on his head and neck.  This looked brutal and I have no idea how he wasn't seriously hurt.  But it sorta played into the later minutes, with Bryan narrowly beating a ten-count back into the ring and falling prey to a spectacular reverse superplex.  Gulak slapped on a Dragon Sleeper after hitting a series of Bryan-style repeated elbows, but Bryan countered into the Yes Lock, hit his own elbows, and made Gulak pass out for the win.  Excellent opener, and it ended up the Match of the Night.  Bryan is still the best talent on the main roster and needs a great WrestleMania match.  **** 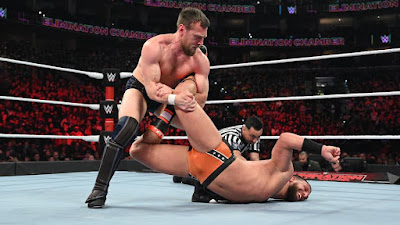 They followed this with another solid match, Andrade vs. Humberto Carillo for the US Title.  This didn't have a ton of crowd heat but it was a nice little mix of lucha action and standard WWE fare.  Carillo continues to show a lot of promise, and Andrade is one of the more underrated main roster stars.  After some outside the ring shenanigans with Andrade going for his DDT on the bare floor, Carillo countered with a back body drop for another teased countout spot.  They traded cradles and rollups in the ring but Andrade hooked the tights to steal a three-count and retain.  Not too shabby.  ***1/2


The first Chamber match was next, featuring the entire Smackdown tag team division.  The Usos and New Day kicked things off, which given their unending history together was perhaps too much of the same old.  Lucha House Party entered next and sped things up, though there were numerous miscues around this time, both from the luchas and the New Day.  The luchas did some big spots off the pods and took out both teams.  Miz & Morrison entered fourth to go after the scraps, but Gran Metalik hit a crazy-looking hurricanrana off the top of the pod.  Heavy Machinery came in and got the biggest reaction in the match.  Lince Dorado did a shooting star press from the cage ceiling, but then HM took out Metalik with a Compactor to eliminate the luchas.  Once Ziggler and Roode entered the match, Otis went after Ziggler, charging toward his pod but crashing through the outside wall to the floor, for a novel spot.  Ziggler and Roode double teamed Tucker to eliminate HM.  But the Usos quickly took out Ziggler and Roode with stereo splashes.  The final three teams fought for a few minutes until Miz and Morrison took advantage of a missed dive by Kofi to pin him.  Miz and Morrison then pinned Jey Uso together, with Miz's feet on the ropes.  Pretty anticlimactic final minutes after all the big spots earlier in the match.  This was fine but felt like a series of highspots without much of a story.  Not exactly a standout Chamber match.  ***

AJ Styles and Aleister Black were given the unenviable task of following the Chamber with a 23-minute bout.  This definitely went too long and the crowd didn't care much until the third act, but these guys worked very hard and ended up delivering the second-best match of the night.  The only logical issue though was Anderson & Gallows staying on the outside despite the No DQ stipulation.  They did get involved in the final moments, but why would they wait that long?  This really should've just been a regular match with a ref bump.  They did a few spots with a kendo stick and a few others involving tables, but overall they didn't utilize the stip much.  After about twenty minutes the OC finally jumped in and the three heels pummeled Black.  As they were about to deliver the Magic Killer the lights went out and the Undertaker's gong sounded.  When the lights came on, Taker had Anderson and Gallows by the throat.  AJ vaulted to the top rope and went for a Phenomenal Forearm but Taker caught him and chokeslammed him, and the lights cut again.  When they came back, Taker was gone, and Black hit AJ with Black Mass for the win.  I'm still not excited about AJ trying to carry the 55-year-old Taker to a good match, nor that Black has no one to feud with on the biggest show of the year.  But this match was very good.  ***3/4 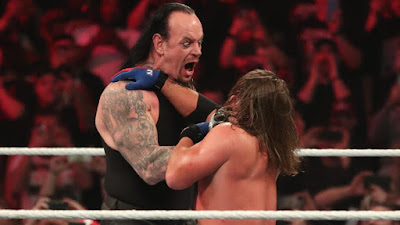 Next up was another overly long match of RAW quality, with Street Profits defending their newly won tag belts against Seth Rollins and Buddy Murphy.  These guys worked hard as usual and pulled off a few big spots, but the crowd was pretty subdued until the late-match appearance of Kevin Owens from the crowd, eating popcorn.  He threw popcorn in Seth's face and Seth sold it like a punch, which made me laugh.  Street Profits then took down Murphy with a spinebuster/frog splash combo to retain.  A pretty good TV bout but not much more.  ***1/4

The weakest match of the night was the 3-on-1 handicap match, Braun Strowman vs. Sami Zayn, Shinsuke Nakamura and Cesaro.  But I have to say, as much as I hate handicap matches, this one at least played out realistically.  Strowman used his power to keep his enemies at bay but the numbers were too much and the heels ended up kinda dominating.  Nak basically took Strowman out with a kinshasa against the steel post, and the heels did their suplex/Helluva Kick combo, followed by Sami covering Strowman to win the Intercontinental Title.  Sami is a great chickenshit heel and I hope he keeps this title for a long time, a la the Honky Tonk Man.  Nakamura meanwhile needs to move into a feud with Daniel Bryan, and Cesaro needs to move to AEW.  This was ok.  **1/4

The main event was one of those matches that wasn't great as far as the work goes, but was perfectly booked for what they needed to get out of it.  The sole purpose of this women's Chamber match was to get Shayna Baszler over as an unstoppable monster, and that's exactly what happened.  For the first time in history an Elimination Chamber participant scored a clean sweep of every opponent, in addition to emptying the ring prior to one or more participants entering, a la Brock in this year's Royal Rumble.  Shayna submitted all five of her opponents with the kirafuda clutch and came off like a female Brock (I have to think this match was booked by Paul Heyman, as it smacked of his storytelling approach).  The action aside from this brilliant booking was solid, if unremarkable.  Natalya and Ruby Riott started out with decent back-and-forth before Sarah Logan came in and went after Ruby.  At one point Sarah hit a crossbody off a pod on both opponents, rocking Nattie by accidentally kneeing her in the face.  Then Shayna came in, choked out Logan in seconds, did the same to Ruby, and proceeded to slam a pod door on Nattie several times before choking her out as well.  In the span of two minutes Baszler cleared the ring of her three opponents.  She then got into taunting matches with Liv Morgan and Asuka, who was totally unhinged (She's fantastic in this role), screaming in Japanese and bouncing up and down.  Liv Morgan was next and Shayna dismantled her, swinging her into the cage and then into the pod before locking in a hangman's version of the choke for the elimination.  Last up was Asuka, the only opponent to get any offense against Shayna.  Asuka hit a hip attack and locked in the chicken wing, but Shayna crawled out of the ring with Asuka attached, rammed her head into the cage repeatedly, and hit her Stormbreaker/V-Trigger/choke combination to win the whole thing.  This was exactly what needed to happen in this match.  Shayna murdered everyone, but Asuka stood above the fray by getting in some offense.  Becky vs. Shayna at WrestleMania has the potential to be an excellent Lesnar-esque massacre.  On balance I'll give this match ***1/2. 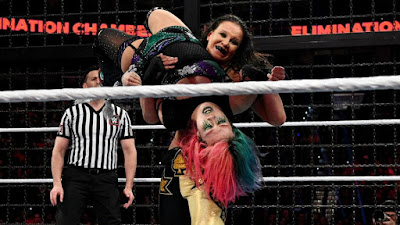 So yeah, a pretty successful Elimination Chamber show considering it only had a week's build and not much star power.  A great opener, a couple strong undercard matches, one spectacle-centered Chamber and one focused on storytelling and star-building.  Not a bad show at all.  Like I said, good wrestling is easy when you don't overthink it.

Best Match: Daniel Bryan vs. Drew Gulak
Worst Match: Braun Strowman vs. Zayn, Nakamura & Cesaro
What I'd Change: Cut five minutes out of AJ vs. Black and the tag title match
Most Disappointing Match: Probably the first Chamber, which had fun action but was pretty sloppy and anticlimactic
Most Pleasant Surprise: I didn't expect to like Bryan-Gulak as much as I did
Overall Rating: 7.5/10