It's late January and that means it's time for another WWE Royal Rumble.  And the 2021 edition of the company's second-biggest PPV looks like......a show. 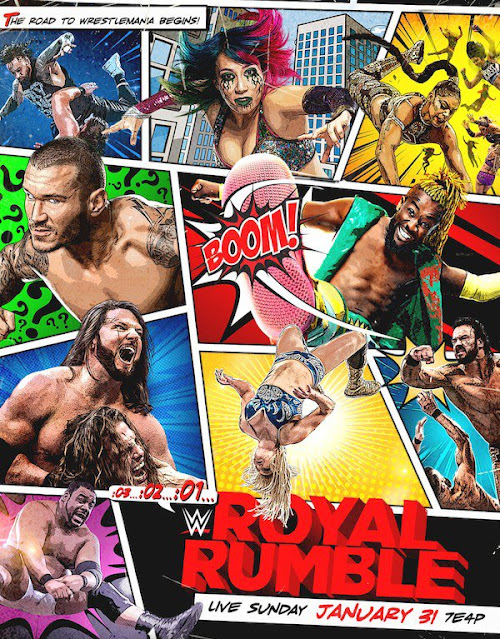 This Sunday is the real test of my WWE boycott.  In years past, even when I've skipped most of the WWE PPV calendar, the Rumble and WrestleMania were the ones I'd come back for.  Still not sure if that will happen in 2021 or not.  My son seems interested in watching, so I might pony up the ten bucks just for his sake.  But on paper this looks like yet another totally skippable show.  Two Rumble matches with only about half the field announced (remember when the company actually planned this stuff out ahead of time?), one solid title match, one that looks like the drizzling shits, and a women's tag match.  That's what we have so far.
Women's Tag Team Championship: Asuka & Charlotte Flair vs. Shayna Baszler & Nia Jax 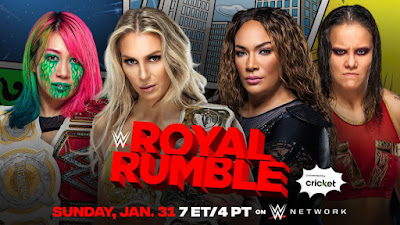 They need to send Nia back to developmental - she keeps hurting or coming dangerously close to hurting her opponents.  This is unsustainable.  She's been on the main roster four years now, she should be a solid pro by this point.  Anyway there's enough strong talent here to make this a good match.  I assume this Asuka/Charlotte thing is temporary and we'll see them fight again.  And hopefully this time Asuka actually gets to win.  But for now I see the heels taking back the belts.
Pick: ShayNia Jaxler
WWE Championship: Drew McIntyre vs. Goldberg 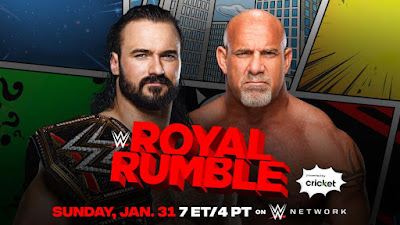 Fuck this company for trotting the 54-year-old WCW guy out for the thousandth time instead of building up a real WWE Title challenger (Was Keith Lee busy?).  Goldberg beating Bray Wyatt last year was the final straw for me as a WWE fan, and now they're going back to that well again.  Like, there's no way they're feeding Drew to him, right?  I know they built up The Fiend as an unbeatable monster for six months before killing his push dead, but with Drew it's been a full year.  I sincerely hope this is just to give Drew more credibility by decisively beating the old spear/jackhammer guy.  There's also the possibility that The Miz tries to cash in again.  Seriously, get rid of the Money in the Bank gimmick, it's so worn out and tiresome now.
Pick: Drew retains.  He better fuckin' retain.  I swear to god if he doesn't retain....
Universal Championship Last Man Standing match: Roman Reigns vs. Kevin Owens 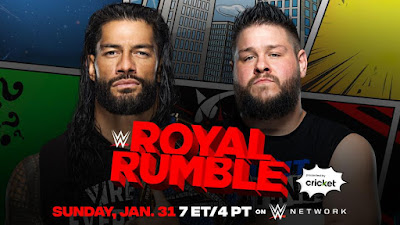 Roman as a heel is apparently one of the only things about WWE's main roster that works these days, and I'm glad they finally chose to turn him after so many years of bland babyface Roman.  Owens has sadly not been built up at all as a credible challenger, so he's got zero shot of winning here, but the match itself should be good even if I hate the LMS gimmick.  Retire Last Man Standing as well, it sucks.
Pick: Roman Reigns retains
Women's Royal Rumble 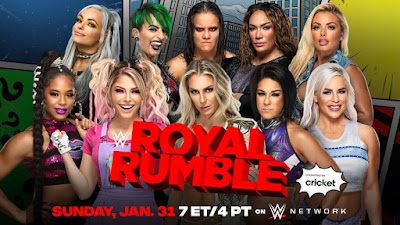 I honestly have no idea who's winning either Rumble match, and I don't think Vince does yet either.  This has to be the most sloppily planned out start to a 'Mania season ever.  That said, maybe because Vince doesn't have his heart set on something shitty, they'll actually do something good.  After CM Punk left seven years ago Vince was forced to put together a good central WrestleMania conflict after all.  We'll see.
Anyway let's narrow down the field to possible winners.  Of the 12 announced participants have Charlotte, Bianca Belair, Bayley, and Shayna.  We could also potentially see Rhea Ripley enter the fray as her official call-up, Becky Lynch return from maternity leave, and (this is a longshot) a surprise return from Ronda Rousey (which financially would be a mistake; you don't bring in a name like Ronda without announcing it ahead of time).  So seven potential winners.  I guess I'll go with Bianca Belair, who had a great showing in last year's Rumble and who is one of the most gifted athletes on the entire roster.  Push her like crazy.  A Sasha vs. Bianca match at WrestleMania would be something.
Pick: Bianca Belair
Men's Rumble

Okay, same tactic.  Of the 17 names announced, the only guys who could realistically win here are Daniel Bryan, AJ Styles, Randy Orton, and Edge.  Orton has won twice already and been in the title picture the last four years, AJ's been a perennial title contender or champion since 2016, and Edge is 47 years old.  That leaves my boy D-Bryan, who is owed a Rumble win from seven years ago and who specifically mentioned this as one of the few things he's never accomplished in his career.  So I'll go with Bryan to finally add this to his resume, which is the main reason I might actually tune in for this show.  Plus Roman vs. Bryan is a match the company built up for months in 2019, only to not deliver it.  That's a fine WrestleMania main event.
I saw speculation that The Fiend could come back and pull the entire Rumble match into his Funhouse, which would be the stupidest thing ever and would damage the credibility of this product beyond repair.  I'll be very upset if I watch this show and that's the ending.
Pick: D-Bryan wins the Rumble
Well there's your picks.  On paper this isn't much of a card aside from the two Rumbles, which are generally a fun one-time watch at least.  Maybe I'll sit down and watch this one, maybe not.  It feels wrong to have a January without watching the Royal Rumble....
Thanks for reading - subscribe to our mailing list, and follow us on Twitter, MeWe, Mix, Facebook and YouTube!
Posted by Justin Enuffa Ballard at 11:11 AM