Welcome to another entry in the Oscar Film Journal, here at Enuffa.com! 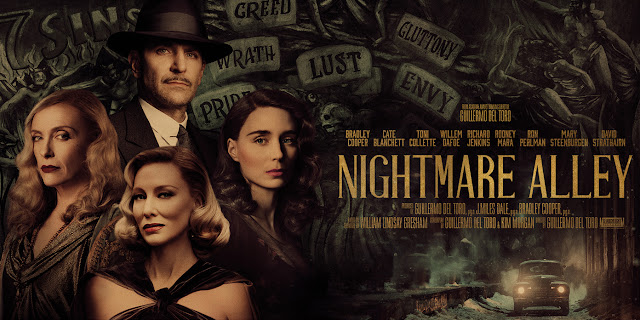 Time for another of this year's Best Picture nominees, the atmospheric, dread-laced film noir by acclaimed director Guillermo del Toro, Nightmare Alley!  Starring Bradley Cooper, Cate Blanchett, Rooney Mara, Toni Collette and Willem Dafoe, Nightmare Alley is the second film adaptation based on the 1946 novel about a down-on-his-luck carny, on the lam for murdering his father, who joins up with a traveling carnival and gradually carves out a lucrative grift for himself as a mentalist.
Cooper's character Stan takes carnival grunt work at first but befriends a married couple who teach him the ins and outs of the carnival's psychic act Madame Zeena (Toni Collette), warning him however that learning too much about this particular con, especially when it involves "contacting the dead," will only end badly for him.  Meanwhile the carnival owner Clem (Dafoe) explains how he gets drunk vagrants to agree to join the "Man or Beast" geek show, by getting them hooked on opium and threatening to fire them if they don't go all-in to sell the act.  Stan convinces Molly, one of the other performers who does an electrocution act, to leave with him and put together their own psychic show, using the system of verbal cues Zeena and her husband Pete taught him, and they become a success in Buffalo, NY, performing for wealthy spectators.  The aforementioned warnings of course go unheeded and things take a turn when Stan is recruited for private consultations regarding deceased loved ones, for which he enlists the help of a noted psychologist (a steamy femme fatale performance by Blanchett) who knows much about Stan's new clientele.  I won't divulge anything further, but if you know the genre or the fatalistic nature of Greek tragedy, you can imagine where this is going...
The film has a cloud of dread hanging over it from the start, all but telegraphing the eventual fate of its doomed protagonist, and like all classic film noir, there are no true heroes.  I couldn't help noticing some parallels with the story of Oedipus, who was foretold of the tragedy which would ultimately befall him but failed to listen.  Stan seems to think he's above it all, but later seems to readily accept his comeuppance, knowing he's dead to rights and that bad things would ultimately be in store for him all along.
Nightmare Alley captures the dark surrealism of the noir genre, but with dripping, vivid colors, its shadowy palette bathed in greens, yellows and browns.  Del Toro and cinematographer Dan Laustsen have crafted a gorgeous visual feast, using wide-angle lenses to elongate many of the scenes and give the film a dreamlike quality.
Bradley Cooper has once again proven himself one of this era's great chameleons, encapsulating the stylized 1940s delivery but in a way that feels true to life.  Blanchett is sultry and conniving as Dr. Ritter, always calculating and never what she seems.  Rooney Mara is sweet and good-natured as Molly, in love with Stan but fearful of his growing hubris.
Nightmare Alley is yet another excellent entry in Del Toro's filmography, and I believe the first to be totally grounded in reality with no fantasy or sci-fi elements.  But it still contains his rich, distinctive visual flair, numerous strong performances, and the timeless narrative elements of noir and classic tragedy.  Oh, and loads, LOADS of foreshadowing....
I give Nightmare Alley **** out of ****.
Thanks for reading - subscribe to our mailing list, and follow us on Twitter, MeWe, Facebook and YouTube!
Posted by Justin Enuffa Ballard at 3:40 PM