Well this is a first.  In the eight years I've been writing up wrestling predictions for Enuffa.com, not once have I attempted to prognosticate a Ring of Honor show.  I was a HUGE ROH fan in its heyday, from 2003-2009, when the only way to see most of their shows was to buy the DVDs from their website.  I still have a big collection from that era, and goddamn, those DVDs still feature some of the best wrestling I've ever seen (Danielson-McGuinness is one of my all-time favorite feuds).  ROH's impact on the business is still being felt to this day - Danielson, Punk, Joe, Claudio, The Bucks, Rollins, Styles and so many others have enjoyed great mainstream success after ROH put them on the map as cult heroes, and the promotion's emphasis on top-notch, creative in-ring action is still being emulated by AEW and at times even WWE.  Ring of Honor was the place where true artists went to hone their craft and create an organic fan following.  It was to the 2000s what ECW was to the 90s, a unique approach to the wrestling business that even the big worldwide companies took notice of.
But enough reminiscing.  Let's look at this Saturday's Death Before Dishonor show! 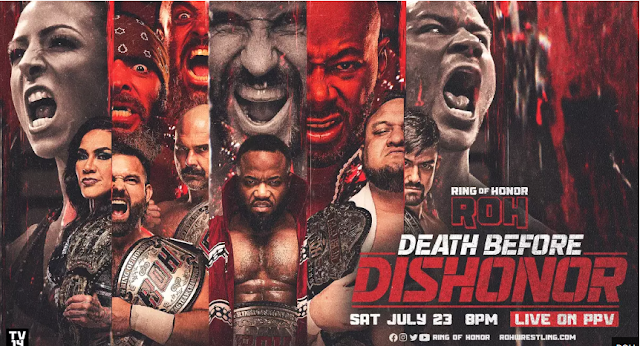 This is a pretty damn stacked card, bolstered by the use of numerous AEW talents, some of whom cut their teeth in ROH itself.  I'm hoping the buyrate is strong enough that HBO Max or someone within the Discovery/Warner umbrella gives ROH its own weekly programming.  Tony Khan is certainly putting his best foot forward with this lineup.
Pre-Show: Allysin Kay vs. Willow Nightingale 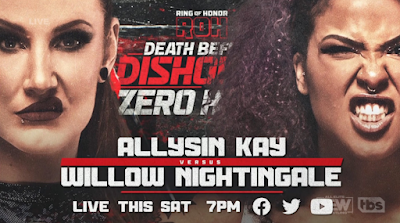 You'll have to forgive my unfamiliarity with a few of the talents involved on this show.  Allysin Kay is one of them, I don't think I've actually seen her wrestle.  I have seen Willow though, and I like her a lot.  She has a unique look, great natural athleticism, and a really likable babyface vibe about her.  Whether it's in ROH or AEW, Willow should become a core member of the women's roster.
Pick: Tough to pick this one since I don't know what the pecking order is.  I think since Kay is more established she probably wins.
ROH Six-Man Championship: The Righteous vs. Dalton Castle & The Boys 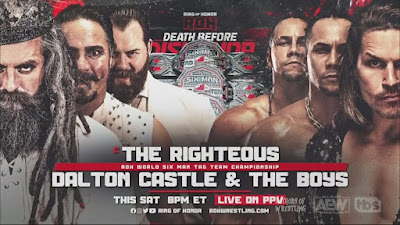 Yeah I know very little about any of these dudes.  As the lone trios match on the card I'm sure it will be a wild, fast-paced affair.  I guess I'll go with the champs to retain.
Pick: The Righteous retains
ROH Women's Championship: Mercedes Martinez vs. Serena Deeb 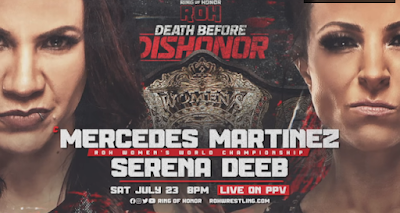 These two are both longtime vets and this should be a fine contest.  Deeb can always be counted on to deliver the goods in the ring and I think she'll be rewarded here with a title win.  As someone with a bit more name recognition than Martinez thanks to being a heavily featured AEW player, Deeb as champion is a smart business move.
Pick: Deeb
ROH Pure Championship: Wheeler Yuta vs. Daniel Garcia 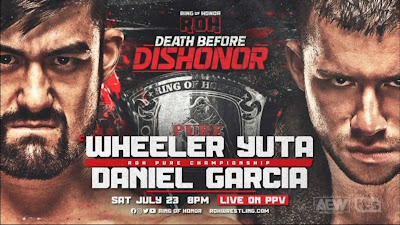 This match could steal the show, and from a purely technical standpoint is likely to do so.  Both guys are fantastic grapplers with realistic fight credibility.  When they were first announcing matches for this show, this match was the one that piqued my interest.  Should be great.
Pick: I think Wheeler retains
ROH TV Championship: Samoa Joe vs. Jay Lethal 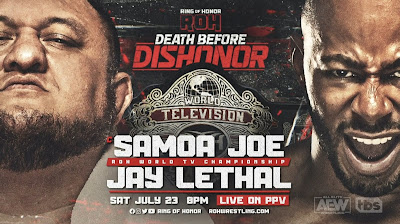 This one's been building since both guys signed with AEW a few months back.  Jay was Joe's protege back in the mid-aughts and there's a loooooong history there.  Since they know each other so well I expect this to be pretty great.  It'll be interesting to see Joe finally back in an ROH ring - will he be able to recapture the old magic?
Pick: This is another tough one to pick.  I could see Joe retaining, but I also think Jay needs the title more, and the fact that he has two guys with him at ringside points to some interference.  I'll go with Jay to score the upset.
ROH World Championship: Jonathan Gresham vs. Claudio Castagnoli 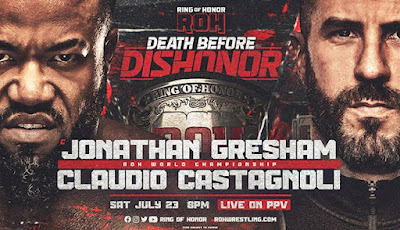 Oh man, this should be a great one.  Claudio is superhuman, Gresham is a technical wizard.  It'll be a wonderful homecoming for Claudio, a former ROH staple who's never won the big one.  I think he's gonna do that here, at long last.  Another smart business move - Claudio is instantly recognizable to wrestling fans thanks to his long WWE run, so if the goal is to get ROH its own weekly show, putting the title on Castagnoli is the way to go.
Pick: Claudio
ROH Tag Team Championship 2-out-of-3 Falls: FTR vs. The Briscoes Holy jeez this is gonna be nuts.  These two teams had a helluva match at Supercard of Honor and I expect them to top that here.  2/3 Falls is my favorite type of gimmick match and I think they'll get a good 40 minutes to tell this story.  This clearly needs to be the main event of the show, given the story and the fact that no one's gonna want to follow it.  FTR is still carving out their place as the best damn tag team in the biz.  This match will go a long way in cementing that reputation.  Sit back and watch the fireworks.
Pick: FTR retains
So yeah, lotta great stuff on tap this weekend.  It's the first time I've ordered an ROH PPV since 2008 and I'm excited to see the promotion return to its roots, but on a much larger stage.
Thanks for reading - subscribe to our mailing list, and follow us on Twitter, MeWe, Facebook and YouTube!
Posted by Justin Enuffa Ballard at 10:04 AM