Fasten your seatbelts, AEW faithful, because this Saturday night is Full Gear! 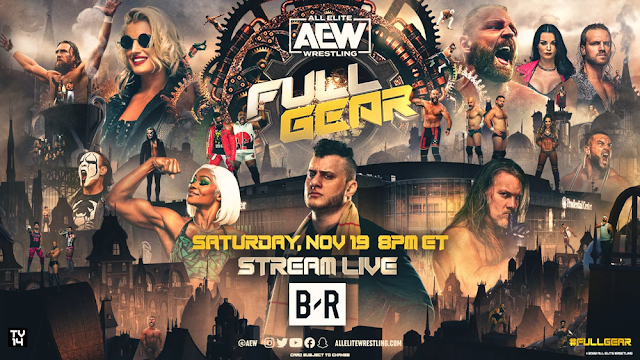 Once again AEW presents a loaded PPV lineup, at a time when the company desperately needs to generate some positive buzz again.  It will be a big test, as it's the first PPV since the CM Punk debacle, moreover the first show of any kind since then with Kenny Omega and the Young Bucks back in the fold, and hopefully the big coronation of the company's breakout homegrown star(s).  As of right now they're closing in on another million-dollar live gate, and if they hit that number and also manage a good 130,000 PPV buys (which would put it in the same ballpark as All Out) one has to consider Full Gear a win.
On paper this looks like one of their more stacked PPVs, with nearly all of their available star power on hand and a slew of potential ****+ bouts.  Let's take a look....
Zero Hour: Brian Cage vs. Ricky Starks or Lance Archer
Obviously Ricky Starks will advance to the semifinals (and likely the finals) of this year's Eliminator tournament.  His medical issue was a blessing in disguise for this show, as it forced the company to push the tournament final back to next Wednesday, thus reducing the PPV lineup to ten matches.  That should probably be the rule going forward with these contender tourneys unless they boast the necessary star power.  Starks and Ethan Page are potentially both future main event guys, but they aren't there yet.  Anyway, Starks will get past former Team Taz stablemate Brian Cage on his way to Dynamite's showdown with Page.
Pick: Ricky Starks
Sting & Darby Allin vs. Jay Lethal & Jeff Jarrett 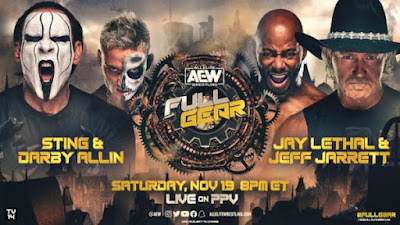 Look, I get that Jarrett probably has a lot of experience and wisdom to offer the company in an offscreen role, but I just can't see the benefit of featuring him on television.  He's been doing the same act since 1998 and it was never a draw even back then.  That said, this should be fine if it's kept in the ten-minute range.  Darby and Jay will provide the fast-paced action, Sting will provide the big pops, and Jarrett will hopefully provide the warm body to pin at the end.
Pick: Sting & Darby
TBS Championship: Jade Cargill vs. Nyla Rose 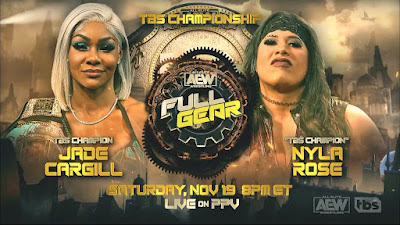 This could go either way in terms of match quality; Jade is only as good a wrestler as her opponent is a ring general.  Rose is a solid hand and can match stiffness with Jade, so it could be an interesting slugfest if done right and kept simple.  Nyla isn't the one to end Jade's streak so Jade will retain here, but they can tell the story that Nyla is the first one to really threaten Jade's undefeated status.
Pick: Jade retains
TNT Championship: Wardlow vs. Samoa Joe vs. Powerhouse Hobbs 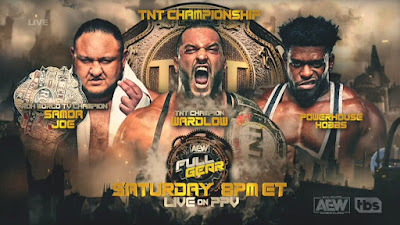 I like this match a lot on paper, speaking of slugfests.  Three big burly dudes beating the crap out of each other.  Any combination of any two of these guys would make for an excellent TNT Title match, so a triple threat should be fun.  I suspect Joe was added so that if they want to change the title they can do so without pinning Wardlow, and I think that's probably what will happen.  Hobbs gets or steals a pin on Joe to become the champ and set up rematches with both guys.  I'd love to see both Wardlow (obviously) and Hobbs as top AEW stars eventually.  Wardlow needs a title chase against a really credible champion to make him a hot star again.
Pick: Hobbs
Britt Baker vs. Saraya 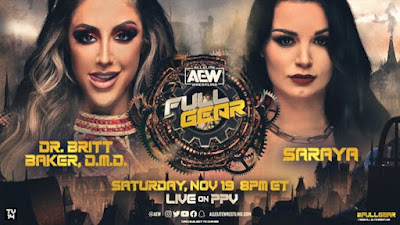 This is a match that could be pretty great, or could be a train wreck depending on Saraya's ring rust.  The promo work between these two has been fantastic and they both have a claim at being the babyface (I imagine Baker will have the crowd's overall sympathy, as the homegrown star who's been there from the beginning).  The question is whether they can back it up between the ropes.  The story is there, the character work is there, and as long as the action is well-executed I think the crowd will go along with it.  I have to think Saraya wins her debut match, but maybe Britt will get a return win later.
Pick: Saraya
Steel Cage Match: Jungle Boy vs. Luchasaurus 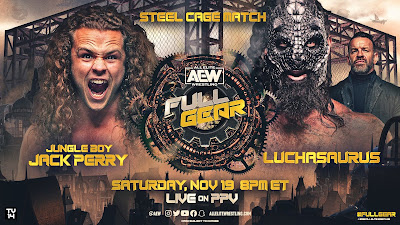 This should be a lot of fun and hopefully a capper (for now) to this feud.  Christian Cage obviously has a future rematch with JB but as he's still injured that won't be for a while.  Jack Perry needs something new to do.  Luchasaurus won the first round pretty handily so JB should get the win here.
Pick: Jungle Boy
AEW Tag Team Championship: The Acclaimed vs. Swerve In Our Glory 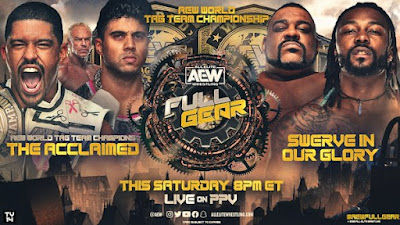 It's the rubber match, and the second-consecutive PPV outing for these two teams.  Their All Out match nearly stole the show, while the rematch fell a bit short of that level.  I think they'll get enough time to give this feud a proper climax and cement The Acclaimed as the hottest tag team act in the business.  I also think Swerve Strickland and Keith Lee will split up after failing to regain the straps.
Pick: The Acclaimed
AEW Interim Women's Championship: Toni Storm vs. Jamie Hayter 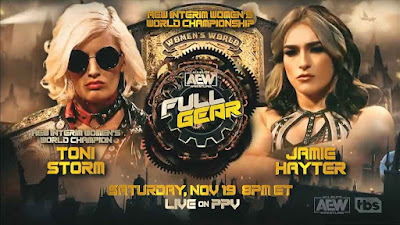 I like this pairing a lot and they've delivered in previous matches.  Hayter is another homegrown star the crowd really responds to and it might be time to finally pull the trigger on her push.  That said, Storm has been a pretty excellent interim champion and I wouldn't mind seeing her title reign fully recognized as a permanent one.  Regardless of the outcome I'm hoping either just before or just after this match they announce that Thunder Rosa's reign is officially over and the winner of this match will be the full-on AEW Women's Champion.  Rosa can get an automatic rematch on her return, but she's been gone a long time.
Pick: I'll go with Hayter to win, though this might be the toughest to pick
ROH World Championship: Chris Jericho vs. Bryan Danielson vs. Claudio Castagnoli vs. Sammy Guevara 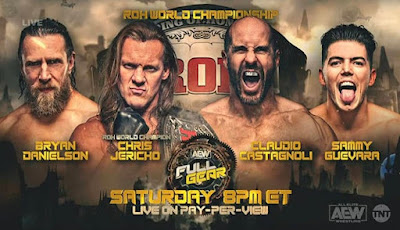 I'm usually not big on 4-way matches but how could this possibly be bad?  Man, this Jericho-Danielson feud has been going on a long time.  I wonder what the plan is for ROH Final Battle, as I can't imagine Jericho dropping the belt before then.  If the goal is to prove ROH can draw, you want your big star champion front and center on that PPV.  I'd say Jericho obviously retains and probably faces Claudio in December, although they could have Danielson, the guy synonymous with great ROH champions, win and face Claudio, with whom he's had tension lately.
Pick: I'll stick with the first option.  Jericho retains.
AEW Trios Championship: Death Triangle vs. The Elite 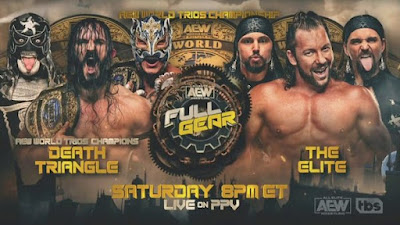 If this doesn't steal the show I'll be fucking shocked.  The Bucks and the Lucha Brothers have stolen every AEW show on which they've faced each other, plus they'll have two of the best singles guys in the world helping them out.  The crowd should be pretty nuclear for The Elite's return (hopefully we won't hear a bunch of toxic "CM Punk" chants aimed at hijacking this), and the match should serve as something of a division reset.  I think we'll also see Pac exit Death Triangle when his cheating finally drives a wedge between him and his partners.  Perhaps Lucha Bros will then recruit Bandido as their new third guy.  Anyway this should be spectacular.
Pick: The Elite
AEW World Championship: Jon Moxley vs. MJF And with this match we should end up back on track in terms of what was mapped out early this year.  CM Punk was supposed to win the title from Hangman Page, hold it for a while, and drop it to MJF in their rubber match.  But Punk got injured twice and then started a backstage brawl, all over rumors surrounding an ex-friend he supposedly doesn't care about.  Fortunately Jon Moxley, MVP that he is, was there to pick up the slack and steer the ship to its intended destination.  Interestingly though, MJF has now become an anti-hero and gets bigger babyface pops than Mox or anyone outside of The Acclaimed.  The question is, does MJF win the title clean and become a sorta babyface, does he enlist The Firm's help despite their having attacked him, or does he turn William Regal against his own faction?  I think probably the smartest business move would be the first option, where MJF has the chance to cheat but manages to win the title more or less cleanly, becoming a proper anti-hero, the kind of guy who is willing to break the rules but can also win without doing so.  That would also line up with his likely first title defense against The Firm's Ethan Page and continue the heat between Max and Stokely Hathaway.  At any rate this should be a pretty great old-school wrestling match and the long-awaited coronation of Maxwell Jacob Friedman.
Pick: MJF
Like I said, this lineup looks pretty much as good as any PPV docket they've ever assembled.  The variables are crowd enthusiasm and whether certain talents are up to the job of delivering on its potential.  All the ingredients are there for Full Gear to be the type of show that kicks off a new and hopefully prosperous era.  Lots of room for the company's homegrown stars to shine - let's see if AEW can regain the momentum they had over the summer.
Thanks for reading - subscribe to our mailing list, and follow us on Twitter, MeWe, Facebook and YouTube!
Posted by Justin Enuffa Ballard at 3:03 PM