Welcome to a special beer-related column here at Enuffa.com!  Today I'll be comparing and contrasting two local Massachusetts breweries my wife Kelly and I visited over the weekend - Night Shift Brewing and Idle Hands Craft Ales, both located in Everett, MA.  Both companies have been making beer for about three years, but have taken very different approaches.

Visiting these two breweries back-to-back strangely brought to mind the 2006 Christopher Nolan film, The Prestige.  If you aren't familiar, The Prestige starred Hugh Jackman and Christian Bale as rival magicians in Victorian England.  Jackman's character (Robert Angier) is a consummate showman who knows how to work a crowd and present his act in the most entertaining way possible, while Bale (Alfred Borden) is more of an introvert and student of the prestidigitation game, obsessed with creating groundbreaking illusions but initially unskilled at dressing up his act to garner the best audience reaction.  Remember that comparison for later....

We first went to Night Shift, which sports a large open tasting room with quirky, industrial decor, a couple dozen tables of various sizes (some fashioned out of old beer barrels which adds a cool rustic character to the room), and a wide bar flanked by artistically assembled chalkboard menus.  At one end of the room was a giant projection screen showing the Tigers-Cardinals game, and near the entrance was the merch shelf which featured multiple T-shirt designs, glasses, etc.  This room had a tremendously fun atmosphere akin to an idiosyncratic hipster sports bar.  The tasting flights were presented in tiny goblets and carried in an oak barrel stave. 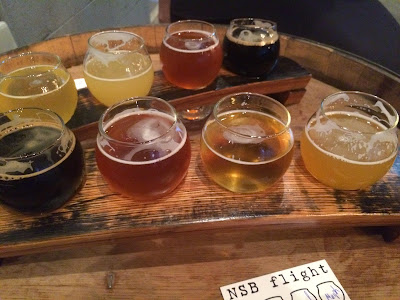 As for the beer itself, Kelly and I each got a tasting flight with four selections.  Night Shift leans toward experimental mashups of different flavors and in some cases changes the recipe with each batch.  We had somewhat different flights, but I enjoyed my picks more than Kelly did.  Note: where possible I'm including the brewery's own description of each beer in parenthesees.

Kelly: Citrusy but sour. It almost seemed too sour, like it went bad.

Justin:  A really odd combination of flavors.  I'm generally not into beer that's overly fruit-infused, and the sourness just seemed out of place to me.


Diagonal
(A Berliner/Pale Ale fusion. Tart with hoppy notes of kiwi and mango.)

Kelly: Weird. Tasted sorta citrusy and sorta salty.  Not in a good way.

Justin: This beer was ok but nothing I'd select.  It seemed like it couldn't decide whether to be hoppy or citrusy.

Kelly: I liked this one best. Not super-hoppy.

Justin: A really good Belgian pale ale.  With other Belgian PAs I find the hoppiness often overwhelms the Wyeast flavor, but this had a good balance between the two.

Kelly: I would have liked this, except the espresso/coffee note was bitter to the point of being almost sour.  Seems like a running theme, but there was a lot of sourness throughout my flight. I chose my beers based on a few of their descriptions of fresh peach and citrus, but it didn't pan out for me.

Justin: I liked this more than Kelly did.  I love stouts and porters anyway, and this had nice chocolate notes, though was maybe overly bitter on the finish.


Additionally I tasted the following:


Morph
(Inside each can is a delicious IPA. That much is constant. The beer’s recipe, however, is always changing.....Experimenting with different combinations of hops and malts each batch...)

Justin: This one was very hoppy which is generally not my thing.  I don't go out of my way to drink IPAs, but if they're in front of me I'll drink 'em.

Justin: This was delicious. Best of the bunch.  I love saisons and this featured a typically pleasant Belgian yeast flavor complemented nicely by the citrus.

Our overall impression of Night Shift was that it was a fun experience but we didn't love any of the beers we tried.  It wasn't bad by any means, but there wasn't anything I immediately wanted to plunk down money for. 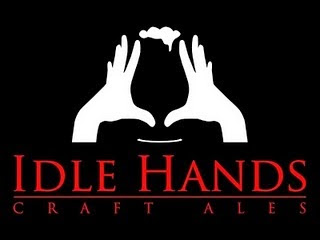 Located about five minutes away is Idle Hands.  Our GPS took us past a condo complex to a cluster of kinda sketchy industrial buildings.  No signage seemed to be visible, nor did we see anyone parked nearby.  I called Idle Hands on the phone and the guy on the other end confirmed we were in the right location.  After a second look I did finally see a small fabric sign hanging above the door.  Upon entering the building we had to go through a dingy hallway to a room on the other side of the complex.  Several people were standing outside the door with their tasting glasses, which I found strange until we went in and glimpsed how small the tasting area is.  There were probably fifteen people crammed into a space not much bigger than my bathroom at home.  The "bar" is only about six feet wide with a chalkboard menu nailed to the front at about waist level.  Not the most inviting locale, and it reminded me of a barebones speakeasy.  Don't worry though, things are about to pick up.

The tasting itself consisted of five selections served one at a time in a single souvenir glass (which bore the company logo and was included in the price of the tasting).

Kelly: I thought this was a good standard lager style beer.  Crisp and clear looking, and a smooth taste.  No other strong opinions about it. While it was possibly my least fave of the five, that does not mean it was sub-par.  The others were just that much better.  This was a really nice beer - and nice beers finish last.

Justin: Probably my least favorite of the five but a very basic, drinkable beer with a pilsner flavor to it.  Reminded me a little of a Stella.

Kelly: As someone who generally does not like the bitterness of the hops in an IPA, I actually liked Kesey.  It has a slight fruitiness at the end of it that brightened it up a little and made it very drinkable.  I don't normally consider an IPA to be a thirst-quenching style of beer (probably because usually after a sip of IPA I find myself wanting to wash it down with something to get rid of the bitterness) but this IPA would be great on a hot summer day sitting by the pool.  I'd rank this as my third fave of the five.

Justin: One of the most well-balanced IPAs I've had.  Kesey was distinctly hoppy but not to the point where the other flavors got stomped on.  I agree with Kelly in that I usually don't find IPAs all that quenching but I could see myself enjoying a handful of these.

Kelly: I surprisingly enjoyed the Kesey a bit more and don't remember much about this one.

Justin: I'm a big fan of Tripels (and all Belgian-style beers), and this had the always enjoyable mix of Belgian yeast and slight maltiness.  It was rich-tasting without being heavy.

Kelly: Since I love Saison as a rule, I didn't think this would be much different, and it did not disappoint.  It a beautiful medium-dark bronze color and had a slight hint of sweet grapes at the end.  I immediately found myself thinking that I would like to drink it while sitting outside on a crisp, cool night by the fire - it had a very comforting and warming quality to it.  This was my fave of the five.

Justin: D'aison was the best beer of the whole day.  I loved the unusual take on the saison, with hints of chocolate and grape.  I had been pondering which beer I wanted a take-home growler of, and this answered my question pronto.

Kelly: I've only recently become a fan of stouts, and have only tried a small handful of porters.  I wasn't sure what to think going into it, and the super-dark black color made me hesitate slightly.  However, I was pleasantly surprised to find that Leather was a really well-balanced and smooth porter that was easy to drink (maybe a little too easy!) and not too heavy at all.  Its looks are deceiving.  Don't get me wrong, it was not wimpy in any way, it just had such a great balance of flavors - nothing bitter, nothing strong, great mouthfeel.  It was my second favorite of the group behind the D'aison.

Justin: This was a beautifully smooth porter, with none of the bitter finish sometimes present.  Idle Hands mixed the two styles of porter to balance each other out.  English porters are a bit lighter but also tend to be more bitter, where the Baltic variation is sweeter and fuller-tasting.  This was probably my second favorite at Idle Hands. 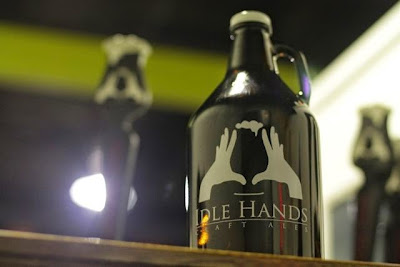 So, tying this all back to The Prestige, Idle Hands is obviously the Alfred Borden of this pair of breweries - utilitarian in presentation, but with a fantastic product (Apparently they are in the process of looking for a more consumer-friendly location).  We enjoyed all five of their beers on some level and really loved a couple of them.  I would go out of my way to find Idle Hands beers at bars and retail stores.

In presentation, Night Shift was light years ahead of Idle Hands, but in terms of the beer itself, Idle Hands handily gets the duke.  I'm a sucker for Belgian-style brewing in general, with its subtle but complex flavor combinations.  The brewers at Idle Hands have clearly mastered this methodology and the result is a host of easily drinkable but intricately-flavored brews.  If you're looking for a fun all-day experience, check out Night Shift, but if you're looking for delightfully flavorful craft beer to add to your fridge, Idle Hands is the way to go.


Thanks for reading!  Comment below with any questions or beer stories!
Posted by Justin Enuffa Ballard at 3:22 PM