Movie Review: Fury Road, or Why I Love Mad Max

What is it about the Mad Max series that has resonated with me (and many others) for the past thirty years?  Why has its central character endured as an iconic dystopian anti-hero?  Why does this series of films with such barebones storylines and almost monosyllabic characters still inspire such fascination?

I've just seen the latest installment/rebirth, Mad Max: Fury Road, starring Tom Hardy in the titular role made famous by Mel Gibson, and it's left my brain swirling with so many varied thoughts and impressions.  Fury Road is one of the most unrelenting action vehicles (no pun intended?) I've ever seen.  Much like its predecessor The Road Warrior, it has the most basic of plots and tells almost the entire story through dazzling, kinetic action sequences.  Its hero has probably less total dialogue over two hours than one Joe Pesci scene in Goodfellas, and his purpose in the film is to assist Imperator Furiosa (Charlize Theron) in liberating five young women from the despotic Immortan Joe (Hugh Keys-Byrne, who was also The Toecutter in the original Mad Max), a cult leader who has kept them imprisoned as baby factories in his mountainous fortress called The Citadel.  Once Joe discovers his "wives" are missing, he sends his army of War Boys after them, and the extended action sequences take it from there.

Like the three original films, this movie creates such a thoroughly detailed and intriguing world that I found myself wishing it was explored a little further before diving into the action.  The visual richness of the Mad Max universe has always been brilliantly executed, which is one of many aspects that sets these movies apart from other action fare.  From set design to vehicle construction to costumes and makeup, there's a ton of spectacular imagery to take in, even before those weird cars start smashing into each other.  I wanted to survey the landscapes and the social hierarchy of The Citadel a little more at the beginning, but then again George Miller has always plunged his Mad Max audiences headlong into the carnage with little in the way of courtship.

That said, the action sequences in this film are amazing.  Miller was and is a pioneer of cinematic car chases, and here he ratchets up the excitement to new levels while mostly sticking with the practical stunts and effects that were the trademark of the earlier films.  Unlike most action movies these days, the vehicular battles in Fury Road are easy to follow, expertly staged and edited, only sparingly CG-enhanced, and above all, fun to watch.  Where the gloomy disaster porn of The Transformers and Man of Steel were a total drag to sit through, the action in this movie left me exhilarated and I felt like burning rubber out of the theater parking lot! 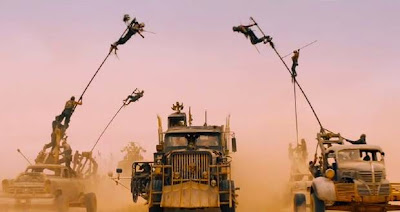 Another piece of Miller's genius is his uncanny ability to create and convey memorable, easily identifiable characters we care about, almost entirely through their actions.  There's little to no expository dialogue in any of these films to establish the principles or their respective backgrounds, and yet all of these fictional people are clearly drawn and we become emotionally invested in their stories.  I'm honestly not sure how he does it (Certainly the actors' performances are a big part of the puzzle too), but I'm certainly not complaining.  This facet of the series might be the most important in elevating it above its action-adventure peers.  We either like or hate the characters, imbuing all of the mayhem with weight, purpose, and consequence, and thus we're drawn into the experience.

As for the character of Max; we identify with him because he is us.  He started out a normal family man who worked diligently to preserve harmony and civility in a crumbling world.  Despite being the star officer on the force, Max remained humble and kept his priorities in line.  He feared becoming a crazed nomad like the men he chased down for a living.  And then it was all taken away from him.  He became a wanderer, swearing off any attachment to the rest of the world.  Yet he still maintained a sense of honor and bravery, reluctantly agreeing to help those in need and seeking no praise or gratitude for his actions.  In all but the first film, he's almost a plot device; a nameless figure who arrives on the scene by chance, to help the real protagonists defeat their enemies.  And when it's all over, he's gone.  Max is the embodiment of what we would probably become, were we thrust into such desolate surroundings.  We see this barren world through his eyes, and therefore he doesn't have much need for dialogue - we already know what he's thinking because it's the same as what we're thinking. 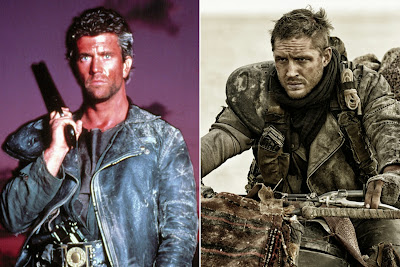 Amazingly these movies barely scratch the surface of the world in which they're set.  Another entire film series could be assembled about the larger backstory, and maybe that's a big part of why I'm so drawn to these films.  Like the original Star Wars trilogy, they invite much deeper exploration.  Why did this society fall apart?  How long was it before Australia became a total war zone?  When did the nuclear winter begin?  What sort of peaceful haven does Max pass up by not staying with his newfound allies at the end of each film?  Why does everyone wear shoulder pads??

I've been a Mad Max fan since 1985, when my stepfather and I saw Beyond Thunderdome in the theater.  I viewed the original films in reverse order; The Road Warrior was broadcast on network TV that summer, and the first film probably about six months later.  For years I watched our crappy taped-from-TV copies of those first two movies literally dozens of times.  The Road Warrior was my absolute favorite film for several years and I still consider it a singular achievement. 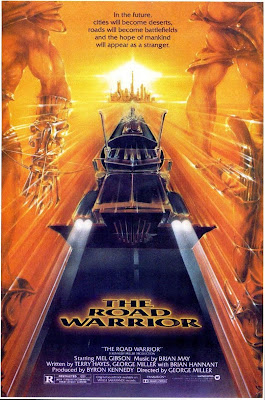 After three decades I'm delighted that George Miller decided to revisit this franchise, as the material in the hands of any other director would've felt like a cheap knockoff.  Miller's economy of storytelling and understanding of characters is largely what makes these films work so well, and I love that a whole new generation now has the chance to experience the Mad Max universe, delivered by its original architect.  Miller has stated that he has two more stories he wants to tell, and I can't wait to see what he comes up with next. 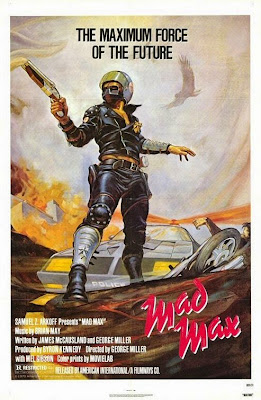 
Posted by Justin Enuffa Ballard at 9:18 AM