Aaaand welcome back to Enuffa.com for yet another round of WWE PPV Predictions!

The Chamber is back!  Despite most arenas now boasting electronic scoreboards that make hanging the heavy, demonic structure from the ceiling impossible, WWE found one arena in Corpus Christi that hasn't yet made such upgrades.  Thus WWE is bringing back the Elimination Chamber for this Network "Special Event."

The show was hastily thrown together over the past two weeks but I'll be goddamned if this isn't the strongest on-paper lineup thus far in WWE's 2015 calendar.  Two Chamber matches for secondary Titles, an awesome WWE Title match, and the main roster in-ring debut of the current NXT Champ, against WWE's posterboy no less.  I'm actually very excited about this show, and I hope it delivers on all fronts.


The preshow will also feature a MizTV segment with special guest Daniel Bryan. 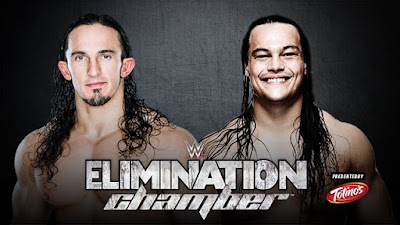 Kind of an odd step down for Neville after being in the IC Title hunt for the past month.  It'd be less jarring if Dallas had beaten ANYONE since his debut last year, but I get why they put this match together.  Neville needs to go on a winning streak to help his slow build, and if he isn't going to win the IC Title in the Chamber here, best keep him out of that match.  Dallas will give him a nice little showcase match.

Justin's pick: Neville obviously
Dan's pick: This sucks because Nevs was gonna be my pick in the IC Chamber...but ya can't pick him if he ain't in the fucking thing. But yea, let's put R-Truth in. Makes sense. Neville will win. 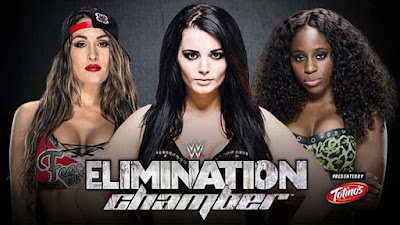 The confusing Divas situation continues.  The heel Champion Nikki, who isn't really a heel anymore vs. the heel Naomi vs. the tweener (I guess) Paige.  I'm not sure who we're supposed to be rooting for.  As usual, these women are all talented in the ring and could crush this if given ten full minutes.

Justin's pick: I think it's time to take the belt off Nikki.  Naomi finally wins the big one, probably with some help from Superfly's kid.
Dan's pick: No clue, don't care, I'm confused, Nikki wins


Tag Team Elimination Chamber: The New Day vs. Cesaro/Kidd vs. Lucha Dragons vs. The Ascension vs. Prime Time Players vs. Los Matadores 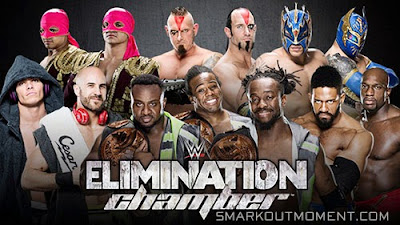 For the first time we'll get to see a tag team Chamber match, where both members of each team will enter the fray at the same time.  Personally I would've made this a three-team match with one guy entering at a time, but this should still be a lot of fun.  As I said before, The New Day is one of the best acts on the show right now and their feud with Cesaro/Kidd is spectacular so far.  This feud needs to continue through the summer.  I'm also looking forward to the Lucha Dragons getting some spotlight, as they're a super-exciting team.


Intercontinental Championship Elimination Chamber: Sheamus vs. King Barrett vs. Ryback vs. Dolph Ziggler vs. R-Truth vs. Rusev (or Bray Wyatt) 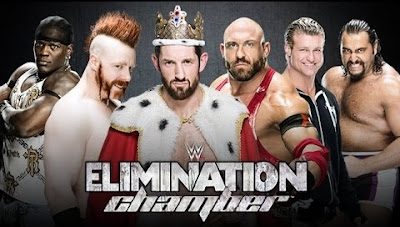 Also a first - the IC Title will be up for grabs in the awesome Chamber.  Sadly Daniel Bryan once again had to forfeit a Title due to injury, and now we'll be crowning a replacement.  This match has loads of potential, as all six of these fellas can go.  Again, I'm not sure why R-Truth has earned a shot, but he's athletic so he'll add something.  For the first time in a long while there are multiple feuds happening in this division that feel important, and I could see most of these guys realistically walking out with the strap.  On paper I like this match a lot.  Note: Rusev may be pulled from this match due to a leg injury he suffered on Smackdown this week.  Bray Wyatt is his likely replacement.

Justin's pick: I think I like Sheamus to win here, setting up a good IC Title feud with Ryback, which would help both guys.  I'll go with the ginger (It's ok, my son's a redhead).
Dan's pick: I think Rusev has to win this one. He's lost A MILLION in a row to Cena. A victory here leads to many potential feuds and puts his push back in motion.  Note: If his leg injury keeps him out of the match, I'll go with Sheamus. 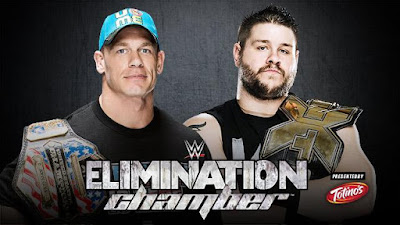 This is gonna be something special.  NXT Champ Kevin Owens (formerly Kevin Steen in ROH) has been presented as a monster bully, and I'm stoked that he's getting a major main roster match while still technically an NXT talent.  It elevates the NXT brand huge, and even a loss here could be a career moment for Owens if presented right.  Look for this to be a stiff slugfest with tons of nearfalls.

Justin's pick: If I had my way, Owens would get the upset win here.  Cena's coming off a three-match winning streak against Rusev, and the US Title's not on the line, so it wouldn't hurt him much.  But I have a feeling Owens will come up JUST short.  Cena narrowly escapes defeat.
Dan's pick: Cena will prevail over this rookie. 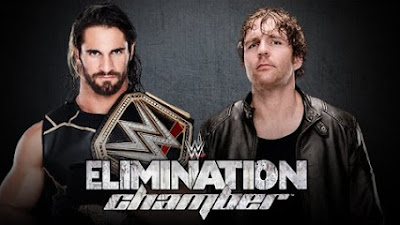 So excited for this one.  Ambrose has been red hot lately and it's nice to see him once again presented as a big deal.  These two have repeatedly demonstrated brilliant chemistry together and there's no reason this can't be a Match of the Year candidate.  I like that Rollins is using the Pedigree as his new finisher - if he can't use his own move, it fits perfectly that Triple H would bequeath his signature move to his protege.  I also like that Roman Reigns has been Ambrose's running buddy.  Ambrose is super over and Reigns being aligned with him only helps build Reigns' popularity.  All the Shield-centric stuff in the Payback 4-way main event was great, by the way.

Justin's pick: I think Rollins retains by hook or crook (probably the latter).
Dan's pick: Rollins has to retain to set up a rematch with (a probably face-turned) Brock at SummerSlam.


Who would've thought a Network special with only two weeks' build would almost certainly be the best WWE show of the half-year?  This has all the potential to galvanize the fanbase like Money in the Bank 2011 did.  Enjoy the Chamber folks!
Posted by Justin Enuffa Ballard at 11:29 AM