Welcome to the first-ever Enuffa.com New Japan PPV prediction column!  Those of you who already read my stuff know that I started drinking the NJPW Kool-Aid about six months ago and goddamn it's the most delicious beverage I've had in a long time.

This Sunday is the big Dominion PPV, and since a) I've become such a fan of this company and b) this is on paper the most stacked card so far in 2015, I thought I'd expand my prognostication wheelhouse to include major New Japan events.  I probably won't be quite as accurate as I am with WWE since I'm a pretty new fan and am not privy to the same backstage information or storyline/promo segments with NJPW.  But what the hey, let's give it a shot, no?

New Japan's WrestleKingdom 9 show is by far the PPV to beat in 2015, but if any show is going to top that one, it could very well be Dominion.  There's nary a bit of fat in this lineup, and with the exception of Kota Ibushi (whose presence will be missed on this card), all the company's major stars are accounted for.  So let's get to predictin'! 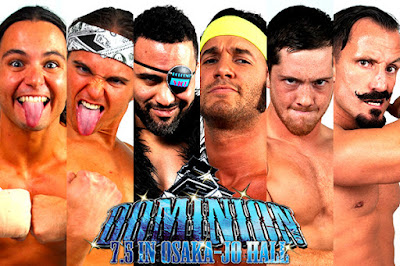 The Jr. Heavyweight Tag division will open the show as usual, which is a perfect fit.  These matches are always fast-paced and full of wild tandem moves.  There's no better way to kickstart a show than with the Young Bucks doing what they do best: defending their Titles and acting like jerks.  Matt and Nick Jackson have one of the best heel acts in the business and this match should be loads of fun.

Justin's pick: The Bucks just won back the belts at May's Wrestling Dontaku event so I don't expect them to lose yet.  Young Bucks retain. 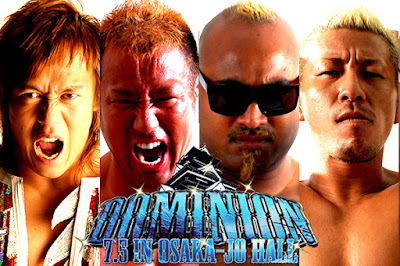 This is the only match on the card that could conceivably be called filler, as it's sort of just a way to get a few more guys on.  Fale and Takahashi are representing the Bullet Club but are sort of the B Team in this case.  Still Naito and Honma are tremendously entertaining babyfaces and if given a good eight minutes this should be a fine undercard match.

Justin's pick: Honma tends to lose almost all the time (not sure why that is), so I could easily see the Bullet Club taking this one. 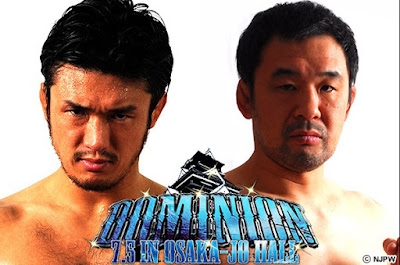 This one should be brutal.  Shibata and Sakuraba are legitimately tough dudes with MMA-style offense and both like a cringe-inducingly stiff match.  I don't expect this to go very long but it should be pretty great.

Justin's pick: This match should be about elevating Shibata, so I see him beating his much older opponent 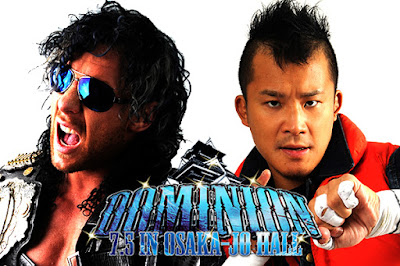 I can't wait for this one.  Kushida is fresh off a magnificent Super Juniors tournament win over Kyle O'Reilly (of reDRagon), and Omega has been a wonderful heel Champ since January.  This is gonna be pretty spectacular. 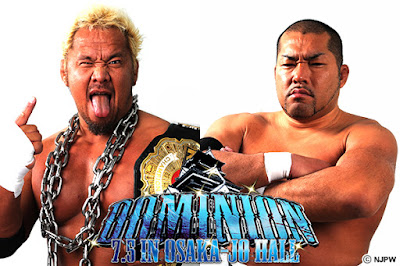 Another potential instant classic.  These two beat the piss out of each other at WrestleKingdom 9 where Makabe won the Never Title, but then he had to drop it due to injury.  Ishii won the vacant Title in February but dropped it back to Makabe in April.  So this will be their third meeting this year, and as long as they keep doing what they've been doing, we could see a show stealer. 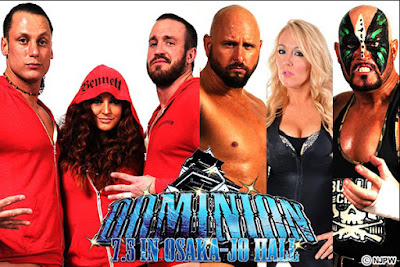 I wasn't overly impressed with the first match these two teams had at Invasion Attack, nor the mixed six-man they had at Dontaku.  Hopefully they'll pull something better out here and this match won't get sidetracked with Karl Anderson gawking at Maria Kanellis's butt.  Way too much WWE-type stuff in this feud so far.

Justin's pick: Gallows and Anderson regain the straps.  The Kingdom winning them in April was kind of an upset, so I don't see it being a long-term reign. 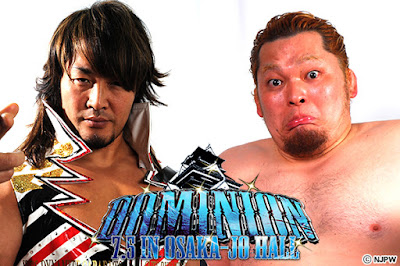 Yano seems a bit below Tanahashi on the totem pole, but since Tanahashi is essentially incapable of a bad match, this should be fine.  I might've put this a little earlier on the card since it probably won't go very long.

Justin's pick: Tanahashi gets the win and moves on to a better opponent 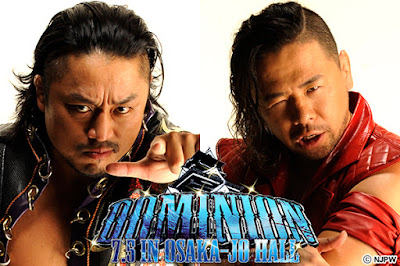 I was a little sad to see Nakamura's reign come to an end at Dontaku.  Nakamura has done more to build equity in a secondary championship than probably anyone since Randy Savage held the WWF I-C belt in the 80s.  Imagine a WWE PPV headlined by an Intercontinental Title match - to get their version of this Title to that level would require Brock Lesnar holding it for a year or more.  But Nakamura made this Title just as important as the World Title in New Japan, and I hope subsequent Champions can continue his legacy.  This would allow Nakamura to once again go after the top Championship, which he hasn't held since 2009.  Par for the course, this match should be excellent.

Justin's pick: I think Goto holds on here and Nakamura maybe wins the G1 Climax tourney for a World Title shot at WrestleKingdom.  At least that's what I'm hoping for. 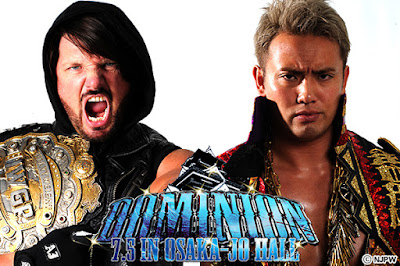 This one's been building up for over a year.  Styles arrived in NJPW in early 2014 and quickly won the big belt from Okada with the help of his Bullet club cohorts.  Okada failed to regain it but won last year's G1 Climax to get a shot at WK9, where he came up short (and sold the loss like his life was over).  His career then went into a storyline tailspin for a few months with repeated losses to Bad Luck Fale, before he finally vanquished the massive Tongan at Invasion Attack and challenged Styles to a Title rematch here.  These two have had stupendous matches in the past and I expect no different this time.  Styles is pound-for-pound one of the all-time greats, and over the past three years Okada has swiftly become Tanahashi's heir-apparent as New Japan's top dog.

Justin's pick: I'm going with Okada to finally regain the Championship he's been chasing for a year.  With Tanahashi seemingly taking on more of a Special Attraction role a la John Cena, and Styles potentially being courted by WWE when his contract is up, the 27-year-old Okada will be the new face of NJPW, theoretically for the next decade.  I could see an Okada-Nakamura WK10 main event, which would be gigantic.


So that's where my head's at going into this resplendent-looking PPV.  I hope it lives up to its promise, as we could be looking at the best show of the year.  Topping the near-perfect WrestleKingdom 9 would be quite a feat, but you never know.  I'll be back next week with my post-PPV thoughts, so be sure to stay tuned!
Posted by Justin Enuffa Ballard at 3:09 PM