Well folks, this is a week late because I just got around to seeing it (I have a kid, sue me), but holy crap was Logan awesome.  It was an emotionally complex, grounded, and above all moving look at the character of Wolverine.  I have no qualms about saying this is the best-ever cinematic execution of the character, and easily Hugh Jackman's strongest performance in the role.  Dan, what did you think of Logan? 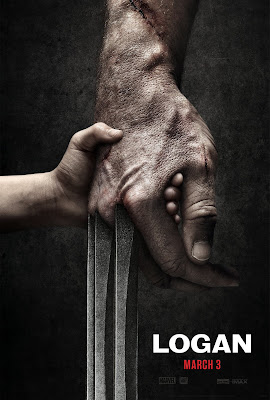 Dan: A damn fine feature film. One of the best comic book movies I've ever seen. It was action packed, at times funny, and truly an emotional ride. And I damn near cried. Which is saying something, because I'm a heartless monster. Jackman really played up the world weary, beat-up and just plain tired version of Wolverine. He looked like a pair of jeans you've owned for a decade, all frayed and destroyed. It's a real departure from the un-killable superhero we've become used to in the last 17(!) years of X-Men movies. This run-down version of Logan really adds humanity to the character. Jackman always played Wolverine to the Nth degree and has been great in the role. But seeing him here as his life is winding down adds another incredible layer to the performance.


Justin: His physical vulnerability and emotionally wrecked persona just made for a much more interesting version of the character and gave Jackman more dramatic meat than he's ever had in these films.  I also liked the elements borrowed from the Mad Max films and numerous westerns like Unforgiven and Shane.  I've read a few reviews comparing this iteration of Logan to Clint Eastwood's aging gunslinger in Unforgiven and I think that's pretty spot-on.  This guy lived through the battles, saw most of his friends die, and just wants to wind down the clock at this point, but is called to do one last heroic job. 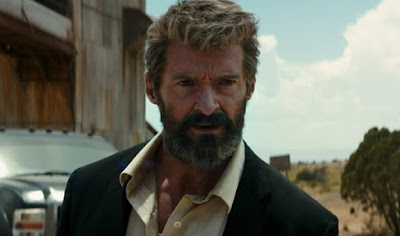 Jackman is surrounded by excellent supporting performances as well.  Patrick Stewart is a 90-something, near-senile version of Professor X, and conveys pathos and heartbreak as never before, Stephen Merchant shows incredible dramatic chops as Caliban the mutant tracker, Boyd Holbrook brings southern swagger and cold sadism as the villainous Donald Pierce, and newcomer Dafne Keen shines in a near-wordless performance as Logan's genetically engineered daughter Laura/X-23, nailing both the emotional scenes and the berzerker rage action stuff.


Dan: I thought everyone in the movie was cast perfectly. And I knew I recognized his voice but I didn't realize it was Stephen Merchant till about halfway through the flick. He nailed that role. A sad, pathetic being that only wanted to have people around him, essentially. It was a tough role to play but goddamn he has perfect.

The R rating felt essential for this movie as well. As the last chapter in Wolverine's story, we finally got to see him REALLY let loose. My lord, it was a bloody mess throughout the movie. I felt the violence was necessary to tell this story. The language, however, threw me off at first. Hearing Logan swear is not a big deal. I mean, his cameo in X-Men First Class is one big "fucking" joke. But to hear the formerly pristine and well-mannered Charles throw out a few f-bombs was jarring to say the least. It made sense for the condition his character was in, but man it was odd listening to Sir Patrick talking like a sailor.


Justin: Yeah this movie had to be a gritty, R-rated bloodbath.  Logan is at the end of his rope and simply does not give a fuck about sparing the lives of henchmen.  And yes, hearing Xavier cuss was pretty weird at first, but it made sense.

I'd love to see Merchant take on more dramatic work - he was really unexpectedly great in this.  I could see him as a conflicted serial killer-type character.

One of the standout scenes was the massacre at the hotel, during Xavier's seizure.  This was up there with the Quicksilver sequence in Days of Future Past - just a totally unique and in this case uncomfortable take on an action set piece.


Dan: Yeah, I was actually disturbed with that sequence. I know they were the bad guys chasing around our heroes for the whole movie, but Christ, what a cold-blooded way to wipe out those fuckers. None of them could move or defend themselves, and Logan just ends their life cycles. Brutal. It was cool to see though. Wolverine still had that killer's instinct in him. 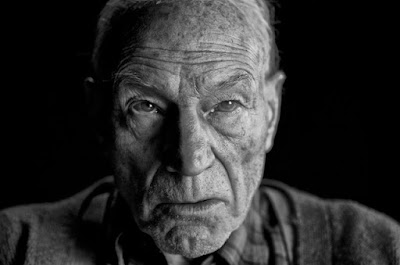 One of my favorite aspects of this film was that it was detached from the main story arc of the X-Men films. They mention some stuff from previous flicks, but it's not bogged down in the ever-confusing mythology of the other movies. It's allowed to stand on its own, and it's a stronger piece for it. It's just Logan and Charles. That's it. These two have been together since the beginning, and it's fitting that they are together in the end. You get a real sense of love between them. Logan as the unwilling caretaker. Charles as the unwilling patient. But you can tell there is a true friendship between them. It's played beautifully by Jackman and Stewart.


Justin: Yes the filmmakers kept the story simple and mostly self-contained.  One of the drawbacks of this X-Men series (as much as I love it) is the timeline shenanigans.  Singer's departure from X3 a decade ago left the studio and Brett Ratner free to screw up the entire saga, and though Singer made an effort to fix things on his return, some stuff still doesn't line up.  But here everything is referred to vaguely so you don't have to hurt your brain worrying about it.  You can just enjoy this small-scope narrative for what it is.

This film also has the best-ever chemistry between Jackman and Stewart.  Never before have we gotten a true sense of how much these two characters care about each other, strained though their relationship might be.  It's a real human drama adorned with comic book trappings.


Dan: The chemistry between the three lead characters (Logan, Prof X & X-23) is the defining characteristic of this film. They all become their characters. It's a truly believable, dysfunctional family unit. I loved Logan's interactions with his young protege and how they gradually became a father/daughter team. It made the ending that much more bittersweet.

As the lights fade on Jackman's Wolverine portrayal, I must say they did it with the best possible film they could. It's a movie I wish was an hour longer. How come the good comic book movies can't be as long as the bad ones (I'm looking in your direction, Batman v Superman). Hugh will be missed as the six-clawed feral mutant of death.  An excellent bookend to a great character.


Justin: I loved the scene in the car when she finally talks and they get into a screaming match with each other.  It was a great release of all the tension building between them - his resentment at being dragged into this mission and hers at his apparent disregard for other people. 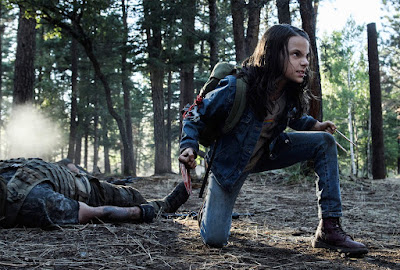 I wouldn't say I wished this were an hour longer - this felt just right at two hours and 15 minutes.  But yeah, the movies you want shorter are always bloated exercises in tired self-indulgence.  Can't wait for the three-hour Justice League movie...

Logan really felt like a different type of superhero film.  For once it wasn't about saving the world from a giant super electro nuclear fusion generator, and it was about individual characters relating to each other and finding some sort of meaning.  The drama and performances were allowed to carry the story, the action was exhilarating but grounded, refreshingly simplistic even, and it felt like a great sendoff for the Wolverine character.


Dan: I agree. It was a gritty, western-like movie that felt nothing like the previous installments in the X-Men saga. I loved this movie, and give it 4 out of 4 stars. An excellent final chapter for our friend Wolverine.
Posted by Justin Enuffa Ballard at 9:11 AM