Welp, that was just plain fuckin' stupid.  The Universal Title is now around the waist of a 50-year-old who's had a total of just over five minutes of in-ring time in the last 13 years.  All so he can finally lose to another part-time guy, who will take the belt and go screw for several months until he drops it to Roman Reigns at SummerSlam.  What a worthless prop this Title is gonna be when it's all over.


But let's back up and start from the beginning.  Fastlane sucked.  Yes there were several good matches, but no great ones and the booking was nonsensical almost across the board.  WWE's Good 2017 PPVs streak has ended at two.  And I don't see WrestleMania 33 starting a new one.

This PPV started out fairly promising, with Samoa Joe and Sami Zayn putting together a pretty good nine-minute match that got Joe across as a murdering bastard.  This obviously could've been a lot better had it gotten 15 minutes or more, and considering they had time for two unannounced throwaway matches that no one cared about, I'm baffled this was so short.  Is Joe not allowed to do the Muscle Buster anymore?  He attempted it here but Zayn blocked it and Joe used the Uranage slam in its place before locking in the Coquina Clutch for the win.  If WWE has banned the Muscle Buster officially, they're idiots.  Tyson Kidd is literally the only guy who's been injured by that move, and that was a freak accident for which Joe was not held responsible.  Anyway this was fine.  No idea what Joe's role will be at 'Mania though.  Maybe Joe vs. Finn Balor? 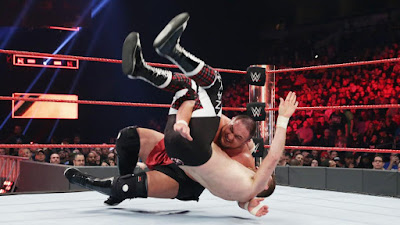 Next up was a perfectly serviceable Tag Title match, with Anderson & Gallows (no longer calling themselves The Club apparently and thankfully) retaining over Enzo & Cass thanks to some heelish shenanigans.  No complaints here.  This was exactly what it needed to be.

Sasha Banks and Nia Jax had a pretty entertaining David vs. Goliath match that played out more or less how I expected.  Aside from a few awkward moments I liked this match, as did the live crowd.  I was actually kinda shocked they were so into this considering how poor Sasha and Nia's previous outings were.  Sasha won with an O'Connor roll to get a flukish victory, as I figured.  Jax isn't hurt much by this loss, although this would be one of three winning streaks ended on this show, further proving an earlier point of mine that WWE should never again do a winning streak angle, as they always, ALWAYS fuck up the payoff.

Fastlane ground to a screeching and embarrassing halt after this, as they threw together not one but two unannounced "bonus" matches as a way to break up a team no one gave a shit about in the first place.  The first was Cesaro vs. Jinder Mahal which stunk up the place after Mahal was attacked by former partner Rusev.  This match got almost as much time as Joe vs. Zayn, and so did the next match, Rusev vs. Big Show.  Show got a very decisive win over the now-heatless Rusev, after three chokeslams and a punch in the face.  Show is obviously being built up for a big 'Mania match, but since apparently the Shaq nonsense is off (THANK FUCKING CHRIST), I'm guessing it'll be Show vs. Strowman II?  That's certainly an improvement, but poor, pathetic Rusev.  Why does Vince get 1000% behind a guy and then totally abandon him a year or two later?  Except for Roman.  Vince is gonna beat that dead horse for the rest of my life.

This shitshow finally got back on track for a little while with the Cruiserweight Title showdown between Neville and Jack Gallagher, in what was easily the best match this division's had on a main roster show.  Neville looked awesome, Gallagher took a massive beating but kept coming back and nailing sick-looking headbutts to the chest, and finally Neville finished him with a Red Arrow.  This stole the show (which isn't saying much but still) and I hope WWE recognizes how much fun Gallagher is to watch. 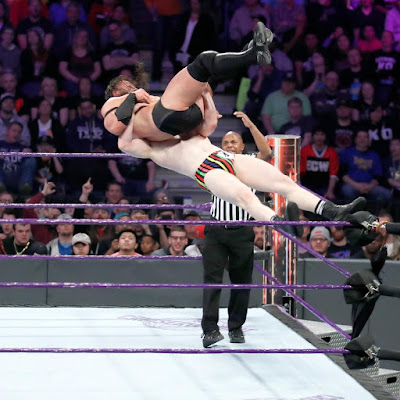 Next up was a solid showing from Roman Reigns and Braun Strowman, as these two delivered a hard-hitting power match that was pretty entertaining all the way through, minus a lame nerve hold segment in the middle (I hate that move so goddamn much).  I liked that they didn't need a ton of bells & whistles here (just one big table spot) and that even in a loss Strowman looked like a nigh unbeatable monster.  Strowman kicked out of the first spear attempt and really only lost due to missing a top rope splash.  However Strowman was the second dominant heel to have a winning streak snapped and probably should've won here.  Did Roman really need a win at Fastlane if he's likely beating Taker next month?  And can we turn the guy fucking heel in my lifetime?? 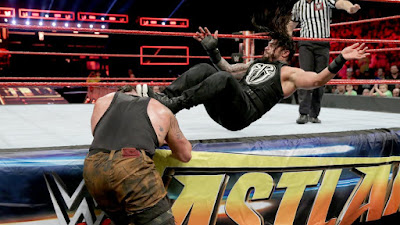 The second-best match of the night was the Women's Title match, which suffered from both a botched Tree of Woe spot that looked awkward and terrible (Charlotte's leg got trapped between the top two ropes and no one seemed sure how to get out of this), and a lame finish that a) made Bayley look like an opportunistic heel despite being a white meat babyface, and b) ended Charlotte's vaunted PPV winning streak unceremoniously.  Sasha Banks randomly showed up near the end and started brawling with Charlotte at ringside (Shouldn't that have been a DQ?) and then broke up a tights-assisted pin which distracted Charlotte long enough for Bayley to hit her finisher.  This booking was clumsy and illogical, and was one of two finishes where the babyface won in less than honorable fashion.  I say again, has Vince McMahon not ever met a truly upstanding human being?  Why is every babyface in this company a douchebag? 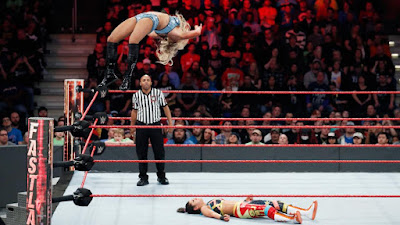 And that brings us to the "main event," and I use that term in the loosest possible manner.  Goldberg did his usual painfully long entrance, then Kevin Owens came out (amazingly the Champion got to come out second) and stalled for roughly four minutes, leaving the ring, coming back in, leaving again, etc.  Finally Owens called for the referee to ring the opening bell, but before that could happen Chris Jericho's music played, distracting Owens just long enough for Goldberg to hit a spear, followed by the jackhammer, followed by a Title change at 21 seconds.  So let's break down this horseshit match, shall we? 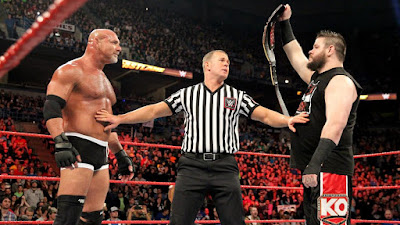 1. The referee called for the opening bell DURING JERICHO'S MUSIC.  Kevin Owens had already turned around and the camera cut to Jericho at the top of the ramp.  Legit, it was a good three seconds from the time Jericho's entrance music hit to the time the bell rang.  Why the fuck would the official call for the bell while all this was happening?

2. Goldberg, like Sheamus at WrestleMania 28, essentially sucker punched Owens to win the belt.  He capitalized on a distraction and then hit the spear the second Owens turned back around.  I'd like to reiterate that: THE BABYFACE won the Title off a distraction.  Owens got screwed.  What world does Vince live in where this is the behavior of a hero?  The shit that went down at Survivor Series was different than this; Brock Lesnar's attention was fully on the match when he got nailed with the spear.  Owens was distracted by Jericho's entrance.  So the last two matches of this PPV involved the babyfaces winning because of outside interference.  Who the hell are we supposed to be rooting for??

3. Bill Goldberg, as I said above, has put in a total of five minutes of ring time since he came back, and now he's the company's top Champion.  Look, Goldberg is what they used to call a special attraction.  Special attractions should not win Championships.  Why?  Because they only show up once in a while and that completely undermines the idea of the Champion being the best wrestler in the company.  If the Champion is never around how does it makes sense that he gets to call himself the best?  He's only the Champion because no one's had the opportunity to try to beat him.  Goldberg is also fifty years old.  Remember during the Monday Night War when the WWF would take potshots at WCW for putting 40-somethings in all their PPV main events?  How brutal do you think they'd be if they were competing with WWE circa 2017?

I absolutely could not care less about this year's WrestleMania main event.  It is unfathomable to me that we're getting a Universal Title match between a 50-year-old who apparently can't take bumps and another part-timer who specializes in glorified squash matches.  No chance in hell this match goes more than ten minutes.  It can't.  Goldberg's body cannot handle more than a handful of Lesnar suplexes.

So then what, Lesnar wins the belt obviously, and wrestles MAYBE three times between 'Mania and Summerslam?  This right after Naomi had to relinquish the Smackdown Women's Title because she wouldn't be able to defend it within 30 days?  Does WWE think we don't watch both brands?  And then I assume we get Lesnar vs. Reigns II at SummerSlam.  Fucking yawn.

I said this last week, but the WrestleMania lineup these days comes off as though Vince hasn't watched any of the weekly programming for months.  He just looks at the roster, throws together a buncha matches he wants to see, and shoehorns all the principles into place regardless if there's any logical, organic way to get there.  So WrestleMania is like a PPV out of time that largely has no real consequences, and afterwards we go back to our originally scheduled program.  WrestleMania season should be the most fun part of the year, and Vince has made it the opposite.  It's become tedious, contrived, dull, and worst of all counterproductive.  Kevin Owens has been the standard bearer for RAW the last six months, but guess what - he's not as important as the guy who peaked 19 years ago in another company.  Awesome.  When is WrestleMania gonna be good again?  I'm waiting.....

Amid all these old-timer comebacks and nostalgia wankfests, there's one guy who actually deserves one more run, and that's Kurt Angle.  But no, he'll probably just be in a GM role even though he's been wrestling consistently up until LAST WEEK.  Fuck, if you're gonna recycle an old Brock Lesnar match why couldn't it be Lesnar vs. Angle??

Best Match: Neville vs. Jack Gallagher
Worst Match: Kevin Owens vs. Goldberg
What I'd Change: Fucking everything
Most Disappointing Match: Charlotte vs. Bayley was good but it should've been great
Most Pleasant Surprise: That the Cruiserweights were able to steal the show
Overall Rating: 5/10
Posted by Justin Enuffa Ballard at 11:30 AM