Welcome to yet another Top Ten Things here at Enuffa.com.  I'm on a freakin' roll with this Worst Champions series, so here we go again.

This time I'll be talking about the US Title, which started as the NWA's number-two Championship in 1975.  The US Title was extremely prestigious for many years, with the NWA automatically recognizing its owner as the #1 contender to the World Championship.  I always found this odd, since the US Champ almost never got a shot at the World Champ, but nonetheless it hammered home the idea that this was an extremely valuable belt that could headline a house show any day of the week (as long as the NWA Champion wasn't on the card).  Like the Intercontinental Title, winning the US Championship often served as a stepping stone for younger talents on their way to the big belt.  Between the NWA, WCW and WWE incarnations of the title, 18 men have won the US Championship on their way to one of the respective World Titles.  Still, as with any championship, this one was not without its share of weak-ass winners.  Here are ten such examples.... 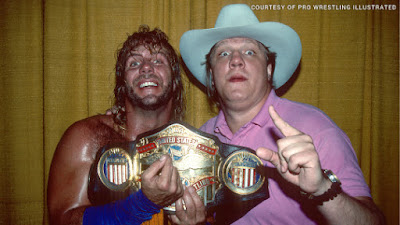 The flamboyant Michael Hayes was a well-known star by the time he returned to the NWA in early 1989.  He was a babyface initially, but turned heel on Lex Luger, joining Hiro Matsuda's short-lived stable that had replaced The Four Horsemen.  Hayes and Luger feuded, and Hayes captured the US Title at WrestleWar but lost it back two weeks later.  The idea of Hayes winning the belt wasn't inherently a bad one, but the execution was terrible.  The feud with Luger was clearly just a stop-gap until the summer, when Luger himself turned heel on Ricky Steamboat.  Meanwhile Hayes reformed the Fabulous Freebirds and got a run with the NWA Tag Team Titles.  This US Title run however just felt tacked-on and pointless.  It's like they weren't sure what to do with Hayes when they brought him back, and just tried a bunch of different things before he settled back into the role he was best suited for. 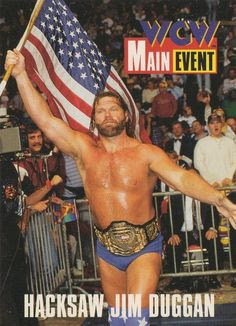 WCW circa 1994 was when Eric Bischoff and Hulk Hogan jettisoned nearly everything that made WCW what it was.  It instead became WWF-lite, where Hogan recycled numerous feuds already done better a decade earlier, brought in a host of his old pals, and gave them prominent spots on the roster.  Homegrown stars like Steve Austin got pushed aside in favor of former WWF stars from the 80s.  Case in point, when Jim Duggan debuted at Fall Brawl 1994 as the surprise challenger for Austin's US Title.  Austin was scheduled to challenge Ricky Steamboat, but Steamboat was injured and the belt was awarded to Austin via forfeit (a nonsensical way to have a title change hands, as I previously mentioned HERE).  Enter Duggan, who proceeded to squash Austin in 35 seconds for the strap.  Good thing Austin didn't have any star potential, huh?  Absurd.  Duggan would go on to get killed by Vader three months later, and remained a lower midcard guy the rest of his WCW run.  Oh, and that Steve Austin guy ended up making a different company quite a bit of money. 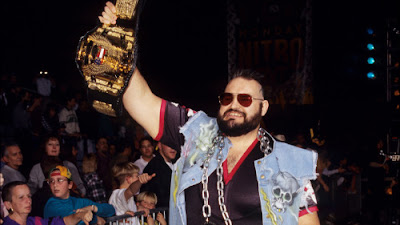 Along those same lines, Hogan also brought in the One Man Gang, fresh off, well, four years of not much (He had a brief 1991 run in WCW but was fired late that year). Gang returned to WCW, got to be the last man eliminated in the inaugural World War 3 60-man battle royal (shades of the first Royal Rumble), and one month later upset Kensuke Sasaki for the belt at Starrcade '95......in a dark match at the end of the show.  Yeah, they booked a US Title match to take place after the PPV went off the air and had a title change occur.  Not only that, the match was restarted immediately and Sasaki regained the title, but the company didn't acknowledge the second title change.  'The fuck sense does that make?  You book two dark match title changes but ignore the second one?  Gang would hold the belt just over a month before dropping it to Konnan and disappearing from WCW only weeks later.  Just another case of WCW trying to revive the career of an irrelevant 80s WWF star and failing miserably. 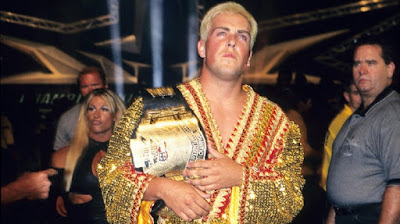 This one was simply a case of nepotism, both on and off-camera.  David Flair, like a lot of real-life relatives during this era (Judy Bagwell anyone?), began appearing on WCW television and eventually became an active in-ring participant.  Despite having little aptitude for pro wrestling, David got involved in multiple storylines, including one where he turned on Ric and joined the nWo Wolfpac (and even had Torrie Wilson as his onscreen girlfriend, the son of a bitch).  The following year he and Ric (now the kayfabe WCW President) buried the hatchet, and Ric decided to strip then-US Champion Scott Steiner of the belt and literally award it to his son.  I mean, if the president of the company can do that, why even have matches at all?  David kept the belt for about a month and lost it to Chris Benoit.  Why didn't Dad bail him out then you ask?  Well Ric had real-life backstage issues with Eric Bischoff at the time and was written off TV for a while.  Shockingly David remained on WCW television on and off until the company's 2001 demise.  But sadly he never had Charlotte's natural gifts, nor her passion for the business. 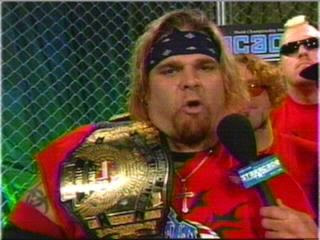 First of all, fuck Bill DeMott.  Second, remember how his original WCW moniker was Hugh Morris (humorous, get it?)?  Well later he was repackaged as the leader of a group called Misfits in Action, under the name General Hugh G. Rection (huge erection, get it?).  Yeah, that's a character you wanna put your number-two belt on.  But they did, twice.  He and the Misfits feuded with Lance Storm's Team Canada stable, and Rection captured the US Title from Lance, lost it back two weeks later, and won it again two weeks after that.  Gotta love the rapid-fire title changes that get nothing over.  Anyway, Rection would keep the belt a whopping 49 days and then drop it to Shane Douglas, but remained in the US Title hunt until WCW folded.  I can't help thinking that if WCW's roster weren't so anemic in 2000, Rection probably wouldn't have gotten a US Title run at all.  Regardless, fuck Bill DeMott. 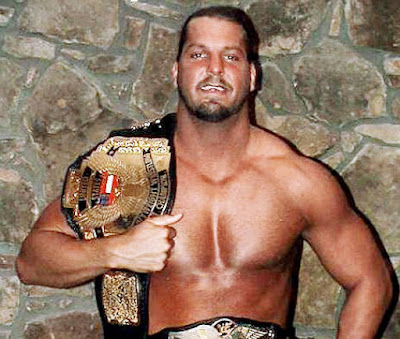 And now we move on to the WWE portion of our list.  In 2001 Vince McMahon purchased WCW, including all its championships and most of its talent (except the talent that really counted), and went full-steam ahead ruining what should've been the greatest angle in wrestling history.  The first US Champion under the new regime was Booker T, but since Booker was also the four-time, four-time, four-time, four-time, Dubya Cee Dubya Champion, he surrendered the US Title on RAW and simply handed it over to fellow WCW guy Chris Kanyon.  This was another example of it not really being the talent's fault that he was a sucky champ, as Kanyon was pretty entertaining as a total dork no one liked, and was very solid in the ring.  But having anyone become champion without winning the title is never a good idea; no one took Kanyon seriously.  Couple that with The Undertaker burying Kanyon and Diamond Dallas Page backstage and squashing them both during the Invasion Angle, and Kanyon's WWF career never got that good again. 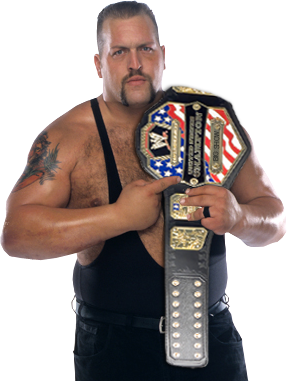 Poor Big Show.  Has this guy ever had a good run with a title?  Big Show defeated Eddie Guerrero (the inaugural US Champion in WWE) rather unceremoniously at No Mercy 2003 and remained champ until WrestleMania the following year.  A title reign of 147 days was a dynasty by 2003 standards, so Justin, what's your issue?  Well sir, Big Show won the title on October 19th, 2003, and didn't defend it until February 3rd, 2004.  That's three and a half months without a title defense.  I know Brock Lesnar can achieve that kind of championship negligence in his sleep nowadays, but in 2003 there was supposedly a 30-day rule about defending a title.  Yet there Show was, just hoarding this belt for months before finally defending against such hungry young upstarts as Billy Gunn and Bob Holly.  There's some credible contenders for ya.  Finally at WrestleMania a 27-year-old whipper snapper by the name of John Cena (Is it pronounced "See-na" or "Say-na?" Or "Say-nya?" Is there an accent mark over the N?) unseated this lazy prick to win the strap and kick off his rise to superstardom. 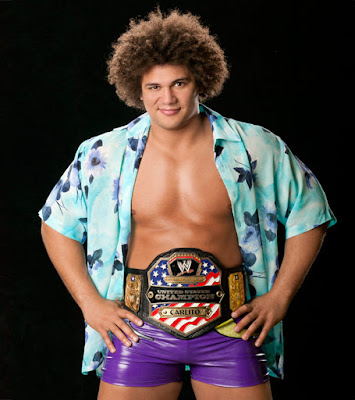 Jeezus Christ with the hotshotting.  Carlito Caribbean Cool, as he was first known in WWE (So like, his middle name was "Caribbean" and his last name was supposed to be "Cool?" That's idiotic.) debuted on an episode of Smackdown in October of 2004 and defeated John Cena for the US Title.  Yup, this guy basically no one was familiar with except in a buncha goofy vignettes where he spit apples at people, got to win the number-two championship on the brand, in his debut match.  I've talked extensively about what a terrible idea this is.  Unless it's a household name like Hulk Hogan (and even hotshotting the WCW Title to him in his first match was questionable), you need to build a guy up BEFORE you put a title on him.  Fuck's sake, this is Wrestling Booking 101.  Not surprisingly Carlito didn't start to catch on for a solid year or so, and the company stopped pushing him just as he was getting really good. 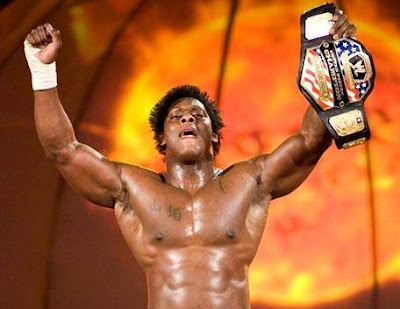 Orlando Jordan had been a floundering lower-card guy for months before they finally gave him something to do, namely becoming WWE Champion JBL's Chief of Staff in a new stable called The Cabinet.  I liked this idea, and the addition of The Basham Brothers as JBL's Co-Secretaries of Defense added a bit of splendor to his politically-charged heel champion character.  But while Jordan made a good sidekick to help JBL retain his championship, he didn't exactly work as a US Champion since he'd never been presented as a credible US Title contender.  This was just so JBL and his buddy could both be champions at the same time.  JBL lost his title a month later but Jordan kept his until SummerSlam when he lost to Chris Benoit in seconds.  In three subsequent rematches he failed to last a minute with Benoit, and went back to being a glorified enhancement talent after that.  Not much of a US Champ there. 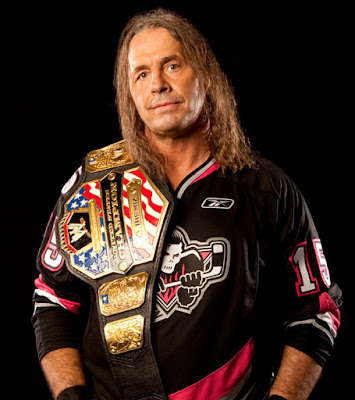 In the spring of 2010 The Miz was one of the hot young heels in the company.  He'd won the US Title from Kofi Kingston the previous October and was in the middle of a very good run with it.  So of course the company had to do something stupid to fuck it all up.  That's where the 53-year-old, retired Bret Hart came in.  Bret had wrestled one match since returning to WWE.  In this case the word "match" is used very loosely.  Bret defeated Vince McMahon at WrestleMania 26 in an embarrassingly awful eleven-minute squash that mostly consisted of Vince getting beaten up by Hart family members until Bret could lock on a Sharpshooter.  The reason for Bret's minimal physicality?  He wasn't cleared to take any bumps whatsoever due to a stroke he'd suffered in 2002.  So yeah, that sounds like US Championship material, eh?  Now anyone who knows me knows Bret Hart is one of my all-time favorite wrestlers.  But putting any championship on a 53-year-old who isn't allowed to take bumps is insultingly asinine.  They momentarily derailed The Miz's push to get a cheap pop in Canada.  That's it.  One week later Bret was named the new RAW GM and thus surrendered the title.  So this was pointless.  And stupid, don't forget stupid.