Welcome to another Top Ten Things, and another in our series examining some of wrestling's worst champions.

Today I'm looking at the worst Women's Title runs in company history, which includes the original incarnation of the belt, the ill-concieved Divas Championship, and one entry for the current version.  The role of Women's wrestling in WWE has run the gamut over the years, from novelty act to eye candy to piss-break match to legitimate athletic attraction.  Over the past five years they've made some great strides in presenting the women as an important part of the show while excessively patting themselves on the back for their progressiveness in this area (In reality TNA and other promotions were literally years ahead of them).  But I'll take a little disproportionate self-congratulating if it means having a real women's division.  Now if Vince could just let Hunter take the creative reins on the main roster we'd really have something.  Look no further than the difference between Sasha-Bayley in NXT and Sasha-Bayley in 2019.

Anywho, given the wildly divergent approaches WWE has taken with the division, there were bound to be some championship runs that were just plain stinkers.  Here are ten of them, in chronological order.... 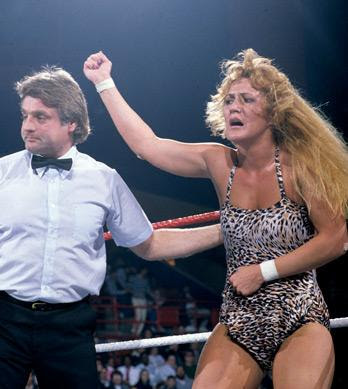 For the majority of the original title's existence it sat squarely around the waist of The Fabulous Moolah, who famously held it from 1956 until 1984 (minus several unrecognized title changes).  Moolah was a major draw for decades and when the WWF went national in the 80s her feud with Wendi Richter was a big part of the show (thanks in part to the involvement of pop star Cyndi Lauper).  After regaining the strap from Wendi via the original WWF Screwjob (Vince was a jerk even back then), Moolah dropped the title to up-and-coming babyface Velvet McIntyre at a house show in Australia.  And then won it back six days later, also at a house show in Australia.  Velvet of course never won the belt again.  Velvet's McEntire title run took place on one foreign continent.  See what I did there? 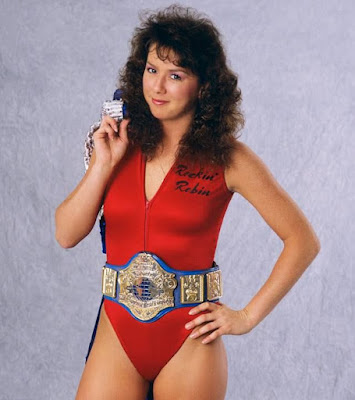 So back to Moolah, she eventually dropped the title for keepsies to Sensational Sherri, which the company touted as a huge deal since she'd rarely been without it for thirty years.  Sherri was built up as a huge heel women's star (for the time anyway), and while not that prominently featured on WWF TV, she kept the title for 15 months before losing it to Rockin' Robin.  Robin however wasn't presented as terribly important beyond her initial win, getting only one major televised title defense at the 1989 Royal Rumble against Judy Martin, with whom she feuded for basically the remainder of the year.  Robin then left the company in early 1990, taking the belt with her, and the title was discontinued.  That's a pretty bad indictment of Robin's lack of importance as a champion when she's barely on television for most of her reign and the belt is simply swept under the carpet when she leaves. 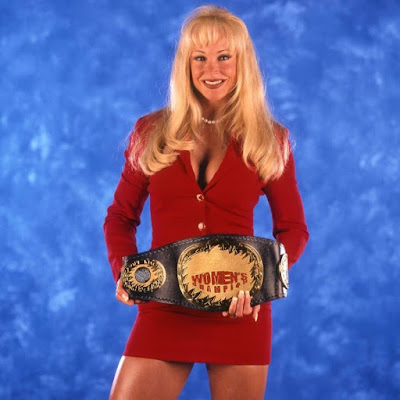 The Women's Title went through two resurgences in the 90s - Alundra Blayze was the belt's custodian during the New Generation era (before also leaving with the belt and infamously throwing it in the trash on WCW Nitro), and then in late 1998 Sable became the division's new centerpiece.  Considering she was originally a valet, Sable picked up the in-ring game pretty quickly and became a very popular attraction before turning heel that spring.  But backstage she and Vince McMahon had gotten into a heated contractual dispute (allegedly she was asked to go topless and she later sued for sexual harassment), and she'd fallen out of favor with the rest of the roster.  So in May of 1999 Sable was booked in an Evening Gown match against Debra McMichael, technically winning the bout when she tore Debra's gown off.  But Commissioner Shawn Michaels instead ruled that the woman who'd lost her gown was actually the winner, and thus non-wrestler Debra was now the Women's Champion.  How one can win a championship by literally LOSING a match is beyond me.  Debra dropped the belt to Ivory four weeks later and went back to being Jeff Jarrett's valet.  The whole thing made no sense and was a shoddy contingency plan for the Sable fiasco. 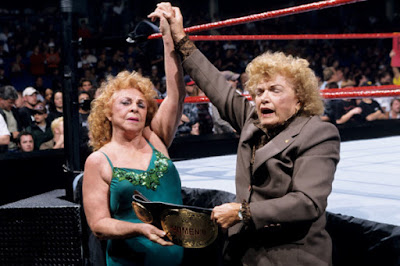 1999 had to be the worst-ever year for the Women's Title, and yes I'm including years when it didn't even exist.  When the title wasn't being wasted on pure eye candy-types or presented as comedic fodder, it was given to the returning, 76-year-old Fabulous Moolah for a week, in a Lifetime Achievement capacity.  At No Mercy 1999 Moolah defeated the division's new cornerstone Ivory in under three minutes, despite not really being able to take bumps since she was, again, SEVENTY-SIX YEARS OLD.  This from the company that three years earlier had made fun of Hulk Hogan (then 42) and Randy Savage (then 43) with a Geriatric Match skit before WrestleMania 12.  Think about it, Moolah was almost as old as both of them COMBINED, comfortably old enough to be their mother.  But yeah, this is totally fine.  Moolah lost the belt back to Ivory a week later.  And then in recent years it came out that she was a garbage human being in real life, so screw her. 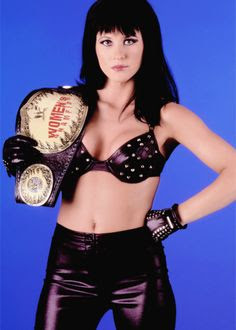 Poor Ivory.  First she has to drop the title to a dirtbag septugenarian and then to Chyna's sidekick who couldn't wrestle a single solitary lick.  The Kat won an Evening Gown Pool match to take the belt and then infamously flashed the crowd.  So of course she became the most popular woman on the roster, particularly with Jerry Lawler, if ya know what I mean (Lawler later married her, quit the company for her, and then came crawling back after she dumped him - great career move, Jerry).  And then just six weeks later she lost the belt to a man in drag.  Great times for this championship, lemme tell ya.  Nothin' but prestige as far as the eye can see. 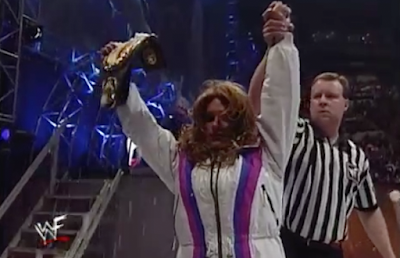 Yeah that's right, they put a dress on Harvey Wippleman and had him win the Women's Title.  In the year 2000.  Fuck this company, why do I watch this shit?  Oh, he lost the belt a day later to an actual woman, Jacqueline.  Who could actually wrestle.  What a novel idea for a woman wrestler to be the women's wrestling champion! 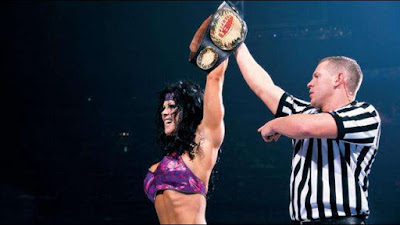 Man, this should've worked out so well.  Chyna winning the Women's Title and just MURDERING everyone else in the division would've been an awesome six-month-or-so arc, and whoever stepped up and actually stopped her would've been a made woman at that point.  Forget that the feud building to Chyna's title win kinda sucked (They did a neck injury angle at the Rumble that came off in very poor taste given how similar the aftermath looked to Owen Hart's accident), and forget that her two-minute squash of Ivory at WrestleMania also kinda sucked (particularly since Chyna didn't sell this mauling as sweet delicious revenge but as a "too easy" lark).  Had she gotten her backstage shit together and taken the push seriously, her Women's Title run could've been epic.  But unfortunately she allegedly became impossible to work with and was taken off TV that May, sandbagging the belt for six months before she was stripped of it and released.  Trish Stratus then won the vacant title at Survivor Series and took the division to stellar new heights, ironically becoming a made woman anyway. 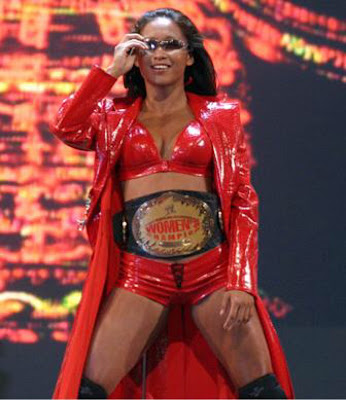 Man, how many times has WWE done this shit?  Let's take someone brand new to the roster, about whom the fans haven't had a chance to develop a flyin' shit, and put the belt on them in their debut match.  What could go wrong?  Gail Kim, a very talented women's wrestler who would go on to spearhead TNA's far superior Knockouts division a few years later, was introduced on RAW as part of a 7-Woman Battle Royal, and won the belt out of nowhere.  Four weeks later she lost it to Molly Holly, and she never won it again.  Less than 18 months after that she was released from WWE.  She had another run with the company from 2008-2011 but never once got the belt - kind of astounding considering how many times that title ping-ponged around.  It's the Curse of the Debut Title Win I guess. 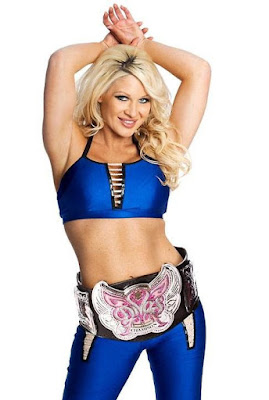 Jillian Hall was a valet-turned-wrestler whose gimmicks included a gigantic, disgusting fake mole on her face that was eventually bitten off by The Boogeyman (What demographic was this aimed at exactly?), and a tone-deaf singer bit where she'd grab the microphone and caterwaul to annoy the fans.  In October of 2009 she defeated Mickie James for the recently introduced Divas Championship (one of the worst-looking belts ever), only to lose it to Melina later in the night.  I'll give you three guesses how many times she won the belt after this.  Go on, I'll wait.....yeah, none.  Point. Less. 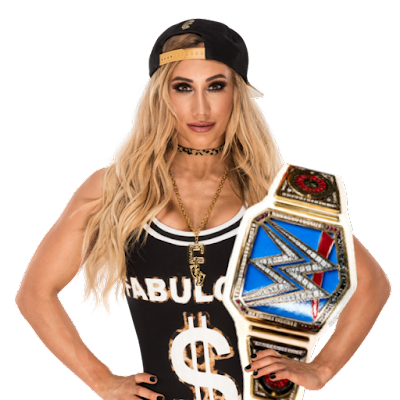 And we've come full circle to 2018.  After three years of building the women's division into a serious athletic roster of accomplished female athletes, restoring the horrible-looking and worse-named Divas Championship back to the Women's Championship, introducing a second such title on Smackdown after the 2016 brand split, and letting Charlotte and Asuka nearly steal the show at WrestleMania 34 (a match that saw Charlotte hand Asuka her first-ever singles loss in WWE), Vince decided to have the inaugural Women's Money in the Bank winner, the less-than-mediocre Carmella, cash in two days later to win the title.  Again, Charlotte had just done the impossible in beating Asuka, only to lose the belt two days later to someone fathoms beneath her.  Carmella then defeated Charlotte clean in a rematch and beat Asuka twice.  None of these matches were good, and all they accomplished was to take the shine off the two best women's wrestlers on the main roster.  Carmella is 2018's answer to Jinder Mahal.  A lifelong undercard player who got arbitrarily elevated to the top of the division, ensuring that every match for this title would be one of the worst on the show.  Ya know, the OPPOSITE of what a good champion does.  She was the consummate 2013 Divas Champion; all sizzle and no steak, whose PPV matches belonged in the "death spot" between bouts we actually gave a shit about.  She dropped the belt back to Charlotte only a few months later and like Jinder was quickly dumped back to the bottom of the card.