Welcome to another Movies of Disbelief here at Enuffa.com!  It's time to discuss an unnecessarily major beef I have with one of my favorite films..... 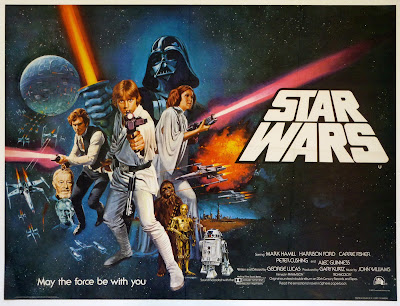 Star Wars.  Just saying those two little words conjures up so much imagery, nostalgia, and special effects badassery.  In 1977 George Lucas dropped perhaps the greatest-ever 200-megaton awesome-bomb on the world, in the form of his sci-fi/fantasy swashbuckler, introducing us all to iconic characters Luke Skywalker, Han Solo, Princess Leia, and of course Darth Vader.  If you didn't grow up with Star Wars in your life, I'm sorry, your childhood was trash.  This film and its two sequels shaped so many lives, and eventually spawned a bona fide pop culture empire (See what I did there?) that keeps churning out new material every year.

So yeah, it's safe to say I'm a Star Wars fan.  No, scratch that, I'm a Star Wars OG.  I've been in Star Wars Heaven since '77.  Well probably more like '79, I was only 18 months old when the first movie came out.  As far as I'm concerned the original film is still the best of the entire franchise.  Empire is a damn close second, but to me A New Hope is one of the most perfect cinematic experiences ever crafted.  And it's Unaltered or nothing by the way, none of that Special Edition bullshit.  I don't need to see cartoon Jabba showing up or a CG-cluttered Mos Eisley, and don't even get me started on Greedo.  If you believe the updated version of that scene is superior to Han blasting Greedo through the fucking pelvis unprovoked, you should check directly into a home for the criminally insane, as you are a danger to both yourself and others.


Anyway, even though Star Wars is one of my absolute favorite films ever made in this or any universe, there are nonetheless a few plot contrivances numerous people have pointed out, and that was even before Lucas completely fucked up the continuity with Special Editions and prequels.  The first and perhaps most frequently cited is when C-3P0 and R2-D2 launch an escape pod from Tantive IV and the Imperial gunners decide not to shoot it down, something which would have prevented the entire film from happening.  Way to cover your bases, assholes.  Another is, why didn't the Death Star just blow up the planet of Yavin, thus destroying the fourth moon and the Rebel Base with it, instead of taking the time to orbit around and allow the Rebels a chance to attack?  But these nitpicks are forgivable considering how fantastic the rest of the movie is.


Where I draw the line though is at Luke keeping the surname Skywalker despite being raised in hiding from his now evil father and the more evil Emperor.  Twenty years earlier Luke and his twin sister were separated and reared by different families so as not to pop up on Vader's radar (That almost rhymes).  Leia became Princess Leia Organa of Alderaan.  But not only did they send Luke to Vader's home planet of Tatooine, they called him Luke SKYWALKER, after his father.  Real nice subterfuge, dummies.  Wait a second though, Luke grew up with his "uncle" Owen Lars, whom he was raised to believe was Anakin's brother, yes?  So why the hell wasn't he called Luke Lars?  And if Luke thinks Owen is his actual uncle, how did they explain to him why his father's surname wasn't also Lars?  Maybe they shared with him the terribly uninteresting saga of the time Anakin showed up at the Lars homestead and brought his dead mother home, and then left?  Jeezus what a boring bedtime story.  "Uncle Owen, how come my name is Skywalker?"  "Well Luke, your dad's mom married my dad.  I only met him for ten minutes and frankly didn't know him from Adam.  He was exactly nothing to me.  So forget all that stuff I told you about how he went off to war and I resented him for it.  'Twas all pure nonsense that homeless hippie Ben told me to tell you.  Here's what really happened, my stepbrother showed up, asked about his mom, buried her corpse in the backyard over there, and then skipped town with our protocol droid.  Wait, DID I JUST BUY BACK MY OWN FUCKING PROTOCOL DROID??  Son of a two-dollar whore!!!"

God I hate the prequels....


Posted by Justin Enuffa Ballard at 8:40 AM