Welcome to Part 2 of our retrospective on George Romero's Living Dead trilogy.  Check out Part 1 HERE... 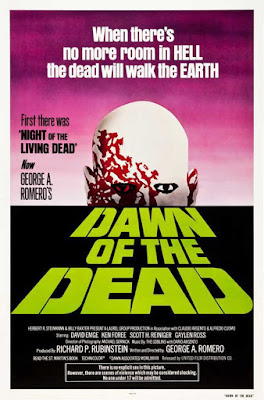 With Night of the Living Dead, George Romero and his collaborators stumbled onto an unexpected cult hit, and while it sadly didn't make any of them rich (Due to an unfortunate copyright snafu the film fell into public domain where it remains to this day), they now had careers as filmmakers.  George directed four feature films after NOTLD with little box office success before returning to the genre that put him on the map.

Romero got the idea while visiting the Monroeville Mall, owned by a friend of his.  The facility had a secluded suite of rooms, fully stocked with food and water, which his friend claimed could sustain a person for months in the event of a nuclear attack.  "Hmm, what about a zombie attack?" George replied.  From this simple premise sprang the narrative seedling for his next project, which would go down as the Citizen Kane of zombie films, Dawn of the Dead.


Romero's second foray into the zombie genre picks up some time after the events of NOTLD, when the entire country is now swarming with the risen dead, private residences have been declared illegal, the emergency networks have taken over all broadcasting, and society as a whole is just about to completely break down.  Four survivors, two from a Pittsburgh TV station and two from a local SWAT force, escape in a traffic 'copter and set up shop at the Monroeville Mall.  As the outside world crumbles, our protagonists find themselves in a shopper's paradise, the entire plaza at their disposal.

As with NOTLD, Romero peppered Dawn with underlying social commentary befitting the era of its release, in this case 1970s American obsession with consumerism and the futility in trying to find happiness in material goods.  And while not as purely terrifying as its predecessor, Dawn of the Dead was a rollicking, action-horror film with moments of humor and a ton of over-the-top gore.  Where Night was filmed in expressionist black & white, Dawn depicted these grisly events in bright, garish colors, using the mall's ample lighting to save time and money during the down n' dirty shoot (The vast majority of the scenes were filmed overnight while the mall was closed, thus time and availability were limited).

Romero once again populated his screen with experienced but unknown actors; all four lead performances are very strong and convey believably distinct personalities.  Ken Foree stars as SWAT officer Peter, the group's level-headed, ever-capable de facto leader; David Emge is Stephen, the traffic reporter, who's always in over his head; Gaylen Ross is network staff member and Stephen's girlfriend Fran, who defies her standing as the group's lone female; and Scott Reiniger as the other SWAT officer Roger is the risk-taker, whose adventurous nature ends up costing him.  The foursome have excellent chemistry together, and the script gives the actors plenty of room to make the characters flawed and relatable.  Emge also delivers probably the greatest-ever zombie performance, hobbling around on a twisted ankle with a pistol dangling haphazardly from one finger, in one of the film's most chillingly off-putting scenes.

Additionally the film features multiple bit performances that add big-picture detail to the narrative.  The two most effective examples are the David Crawford-David Early in-studio debate that quickly establishes the nationwide crisis ("Every dead body that isn't exterminated gets up and kills. The people it kills get up and kill!" is still one of my favorite lines), and the later appearance of Richard France as a coldly logical scientist attempting in vain to advise the public on how to handle the zombies ("They must be destroyed on sight!").  Both moments lend the film instantly memorable world-building and make it that much more immersive.


Maverick makeup artist/stuntman Tom Savini provided Dawn's vast array of effects.  Taking cues from comic books, Savini fabricated the blood in vibrant red/orange hues and the zombie makeup in simple, flat grays.  Savini's walking orders going in were to "start thinking of ways to kill people."  This "anything goes" approach is established in an early sequence when a SWAT member blows off a man's head with a shotgun, resulting in a spectacularly disgusting "exploding head" effect.  From there the dismemberments and disembowelings are plentiful, particularly during the film's climax when the mall is overrun by a biker gang.  Romero and Savini pulled no punches in depicting the heightened body horror, swinging for the fences with every nauseating special effect.  Deservedly, Savini would establish himself with this film as one of the industry's preeminent horror makeup men.

Despite facing marketing and distribution issues thanks to its non-rating, Dawn proved even more successful than NOTLD, grossing $55 million worldwide on a skimpy $1.5 million budget.  Producer Dario Argento released a streamlined cut of the film overseas under the name Zombi, and it raked in a staggering $40 mil outside the US.  Romero's sprawling masterpiece would become for most fans THE definitive zombie film, expanding on its predecessor both in scope and social commentary.  He planned to follow it up with an even larger scale third installment, but after the distributor halved his production budget, Day of the Dead would have to be retooled.  More on that in part 3....


Posted by Justin Enuffa Ballard at 9:09 AM