Since it's Halloween season and this film is 50 years old now, I thought I'd go back and rewatch the legendary Living Dead trilogy, wherein the humble, gentlemanly indie filmmaker George Romero created one of the most disturbing film series of all time.  An aspiring, self-taught director with a background in commercial work, Romero and his associates decided in 1967 to make a feature film, choosing the horror genre for its marketability on a small budget, and a whole new subgenre was born. 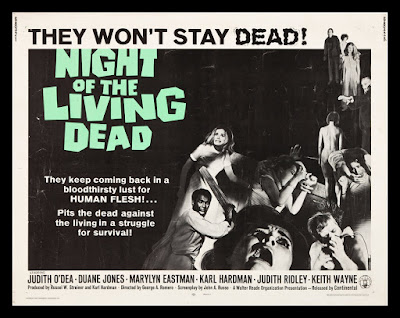 The result of course was Night of the Living Dead, a bloodcurdling guerrilla-style picture about seven survivors holed up in an old farmhouse during a zombie outbreak.  At a time when audiences were conditioned to expect cheeseball horror and sci-fi movies that were playfully scary but ultimately toothless, Night of the Living Dead was truly a shock to the system.  Here was a stark, brutal nightmare of a film depicting in gory detail people and zombies being shot, bludgeoned, stabbed, and eating human entrails, where none of the heroes make it out alive.  The overall tone is so bleak and upsetting I can't imagine how 1968 audiences took it.  NOTLD became a major hit on the midnight movie circuit, eventually grossing over $30 million worldwide on a $114,000 budget.

Romero also unintentionally pulled off a coup by casting an African-American as the film's lead.  Duane Jones, an experienced theater actor, gave the best audition for a role originally written as a white character, thus lending the narrative a poignant layer of political subtext.  The film's tragic finale, where Ben is mistaken for a zombie and shot, before being dragged out of the house and burned by the redneck law enforcement posse, now paralleled the racial tensions and unrest of the Civil Rights era.  The choice to depict the aftermath in grainy still photos echoes violent newspaper clippings of the time, making it that much more upsetting.


Other cast standouts include 23-year-old Judith O'Dea as the hysterically frightened Barbra and producers (and real-life married couple) Karl Hardman and Marilyn Eastman as the antagonistic Harry Cooper and his anxious wife Helen.  Given the non-professional status of most of the actors, the performances are by and large quite effective.


Photographically NOTLD owes much to film noir and Expressionism, with sharp black & white contrast, Dutch angles, and gorgeously atmospheric lighting, while at the same time featuring the urgency of a documentary in its quick cuts and shaky handheld shots.  Considering the minuscule budget, the cinematography captures the mood brilliantly, aided by what Werner Herzog called "the voodoo of location."  The opening shots of Johnny and Barbara's car driving the lonely, rolling hills of rural Pennsylvania, the imposing cemetery, the decrepit old farmhouse, these locations all contributed to the realistically horrific atmosphere, blanketing the film with a sense of impending dread.


And let's not forget the background music selections.  Unable to afford an original score, Romero took various music cues from a stock library, and for the most part the choices are fantastic.  Instead of trite horror cues, Romero mostly went with sci-fi inspired music to put the viewer off-kilter and create a sense of unease and disorientation.  From the opening frame the music sets the tone for a truly harrowing experience and never really lets up, punctuating the grisly action with aural dissonance.

I first watched NOTLD at the age of nine, when my mother picked it up in a bargain VHS bin at the grocery store.  I'd never even heard of the film but my cousin (Hi Eric!) assured me it was a fine flick, and we popped it in the VCR.  For the next 96 minutes I was treated to the most intense horror I'd ever seen up to that point, and despite hating the down ending at the time, NOTLD became pretty regular viewing.  It wasn't until college that I fully came to appreciate the raw skill behind Romero's unlikely masterpiece, and since then it's become one of my all-time favorite horror films.

Amazingly though, Romero would top himself ten years later with an even more effective sequel.  Click the link for part 2 of this retrospective.....