Welcome to the final part of my Living Dead Trilogy retrospective.  If you missed Part 1 and Part 2, check 'em out..... 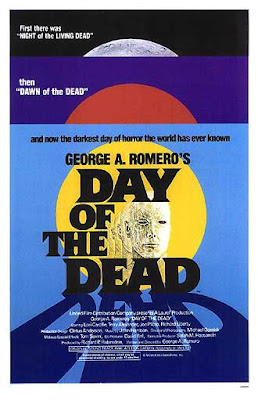 Dawn of the Dead was such a success the distributor, United Film Distribution Company, signed Romero to a three-picture deal, provided that one of those three films would be a sequel to Dawn.  Romero, fearing that if said sequel wasn't a hit he'd lose the chance to direct the two non-zombie films, opted to save it for last.  His next two movies were Knightriders, a Renaissance faire drama which flopped due to poor distribution, and Creepshow, a horror anthology which was a modest hit but by no means a smash.  As a result, UFDC hedged their bets with the Dawn sequel, only willing to adhere to the original $7 million budget if Romero released it as an R-rated film.  Up to this point George had planned for Day of the Dead to be a massive, sweeping zombie epic, "the Gone With the Wind of zombie films," but refused to compromise the intended violence and gore for an R rating.  Thus the budget was slashed in half and Romero was forced to completely overhaul the project.  The resulting film was initially seen as an underwhelming, depressing letdown after the thrill-ride of Dawn, and made most of its money overseas and on home video.  Amazingly though, Day of the Dead has developed an enthusiastic cult following in the thirty-odd years since, in many ways becoming just as influential as its two predecessors.

Day of the Dead takes place a considerable time after Dawn, when the human race is all but wiped out, and only a few pockets of civilization remain, mostly underground.  The story centers around a small military/scientific contingent occupying an abandoned mine, hoping to find some sort of solution to the zombie infestation.  Living conditions are nearly unsustainable and the scientific team is at the mercy of a crazed Captain, who is uninterested in studying the zombies and simply wants to destroy them.  What follows is a power struggle and clash of ideas between the two factions that actually contains more thematic human drama than any other film in the series.


One of the main plot threads concerns the lead scientist, Dr. Logan (a compellingly demented Richard Liberty), who has begun experimenting on zombie specimens, hoping to "tame" them.  His most promising subject is a ghoul called "Bub," who seems to understand/remember how to work basic tools and appears almost civilized.  This subplot exploits a fascinating story element: that the zombies are no longer the bad guys.  Zombies simply act according to their instinctual nature and the only evil left in the world is that which is perpetrated by the survivors.

Led by the almost comically over-the-top Captain Rhodes (Joe Pilato, chewing, swallowing and spitting out the scenery), the military characters, portrayed as immoral, violent fanatics, were Romero's commentary on the "me first" attitude and overreaching military might that had become so prevalent in the plutocratic mid-80s.  Romero described Day as "a tragedy about how lack of communication causes chaos and collapse."


Day also included one of the early iterations of the strong female action/horror lead, with Lori Cardille (daughter of newsman Billy Cardille who was featured in NOTLD) as Dr. Sarah Bowman, in a very internalized, measured performance.  Sarah may be the only character not intimidated by Rhodes's power grab and much of the film deals with these two headstrong characters facing off.  Sarah's two closest allies are Bill the radio operator and John the helicopter pilot, and the three form a sort of resistance to the military crew.  Where the rest of the survivors have long since snapped, Sarah is the rock, just barely holding herself together.


Despite being smaller in scope than Dawn, and in a series rife with bleak, disturbing horror, Day of the Dead oddly serves as a climax in another way, in that it's the trilogy's most unforgivingly harsh entry, by far.  There's no human society left in this film, and what little humanity does remain is hostile, self-serving, and completely devoid of empathy.  The human characters have endured such unrelenting trauma they've all gone insane, from the morbidly curious Logan to the megalomaniacal Rhodes, to the anguish-stricken Private Salazar (Sarah's love interest).  Most of the characters have given up on any return to normalcy and this gloomy nihilism, coupled with the oppressively dreary setting, weighs on this film like an anvil.

One arena where Day soars beyond the first two films is Tom Savini's nauseatingly convincing makeup effects.  Savini has called this film his masterpiece, and he's not wrong.  Where NOTLD's effects were somewhat restrained and presented in stylized black & white, and Dawn's were comic booky and sensationalistic, Day's are legitimately, horrifyingly disgusting.  There are no fewer than four incidents of guts either falling or being ripped out of an abdomen, two characters get outright clawed to pieces by zombie hordes, we see one zombie whose head has been taken apart leaving only a pulsating brain center, and the blood throughout is a syrupy, livid crimson.  The effects in this film are truly sickening, and I mean that in the best possible way.


I first watched Day of the Dead in 2004, having read all about how George didn't get to make the film he originally intended and how the setting was drab compared to Dawn.  I went into this expecting to be let down after the first two films, and I was.  I couldn't relate to the characters, I was distracted by the overacting, and felt like the movie was excessively talky.  I thus dismissed it as yet another weak third part of a trilogy.  A decade later I decided to give it another go, and was surprised how much better it played the second time.  On this viewing I was able to appreciate the plentiful thematic elements, realizing this film wasn't really even about zombies.  It's about the violent depravity of human beings, our egotistical shortsightedness, our inability to empathize with each other.  This theme is profound and ever-present in our society; we can only hope for the day it becomes irrelevant.  I was also able relate to the overacting this time, understanding that it's actually appropriate to the situation.  Most people in this awful scenario would be totally off the rails.  Joe Pilato's mostly yelled dialogue actually makes sense.

I said earlier that Day of the Dead was just as influential as NOTLD and Dawn.  I'd suggest that The Walking Dead for example owes more to this third entry than either of its precursors.  The show is generally not about zombies, but about humans' failure to coexist.  Like Day, TWD's drama is born out of our response to a zombie outbreak and how we relate to each other.  In that regard Day of the Dead may be the most sophisticated of the series.  It also happens to be George's favorite.  Like all good horror, it allows us to self-reflect, examining our failures and fallibility.  Decades after its release, this underappreciated gorefest now stands next to the first two films to form a masterful horror trilogy.

I hope you enjoyed this retrospective of one of the all-time great horror franchises.  Comment below with your thoughts, and thanks for reading!


Posted by Justin Enuffa Ballard at 8:44 AM