Disney's Star Wars is Light on Lightsabers (and Why That's Okay)

It's no secret that there is quite a vocal contingent of Star Wars fans taking a massive dump on everything Lucasfilm has done with the franchise since coming under the Disney umbrella.  We've seen and heard complaints ranging from "Not My Luke" to "SJW" to "Mary Sue" to "Man-hating" and everything in between.  It's become so virulent, actual valid criticisms of the films have been all but drowned out.  The Force Awakens and The Last Jedi are not perfect films.  The former borrowed just a bit too much from A New Hope, while the latter attempted to tackle a few too many things at once and felt disorganized.  That said I enjoy both of them quite a lot and rank them 3rd and 4th in the series, respectively.  Rogue One was an interestingly different take on the Star Wars mythos, focusing on the war aspect and boasting some of the best space battles in the entire series, but for me failed to introduce any characters I really cared about and routinely strayed too far into Fan Service territory. 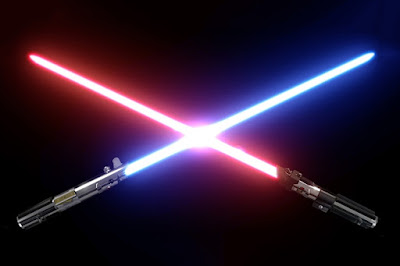 But I'm not here to debate the merits or flaws of these movies, I'm here today to talk about one of the funniest and most simpleminded complaints I've seen about Disney's Star Wars efforts thus far: "There's not enough lightsaber duels!"  Yes, I actually saw someone post this as a reason not to like the Disney Star Wars films.  Of the soon-to-be four films so far, only one has featured a traditional lightsaber duel.  Sweet mother of Jeebus, what has this fanbase come to?

This gripe is pure hilarity, something a third-grader would complain about.  Is the quality/quantity of lightsaber duels directly proportional to the quality of the overall film?  Let's look back at the original two movies, most unanimously considered the two best.  A New Hope features one awkwardly staged duel between an old man and a bodybuilder in a cumbersome mask.  The choreography is stilted, simplistic, and impeded by the fragility of the "blades" being used.  For the 1977 debut film the sabers were made of a reflective but delicate material that would break easily when Alec Guinness and David Prowse bashed them together.  So the first-ever Star Wars lightsaber fight was extremely limited and is generally considered the worst of all of them.  Yet A New Hope is one of the most beloved films of all time.  Is anyone really judging this movie based on the lightsaber duel?  Don't answer that, someone probably is...


The filmmakers learned from this sequence, and going forward used a much more durable material for the blades, adding the glowing laser effect completely in post-production.  Thus every subsequent duel was much more lively and energetic, and the actors were able to really whack the swords together and give the scene a sense of urgency.


That said, even the Empire and Return of the Jedi duels were pretty simple from a choreography standpoint.  But guess what folks - a lightsaber duel is rarely about complex fencing maneuvers.  It's about one character confronting another over a deep-rooted conflict.  In Empire Luke is inexperienced and fearful, challenging Vader for the first time and mostly getting his ass kicked.  The success or failure of the Rebellion is seemingly on his shoulders, and his chances aren't good.  In ROTJ Luke's power is much closer to Vader's but he's reluctant to engage his father at all because he's trying to redeem him.  Neither of these duels is anything fancy, neither features a spectacular exchange.  But they're powerful scenes because of the character conflict.  You could remove the lightsabers altogether and the scenes would still work as an exchange of ideas and themes.  See what I'm getting at?


Let's look at the lightsaber-heavy prequels, which the vast majority of Star Wars fans would agree were the weakest entries (Phantom Menace and Attack of the Clones at least).  The Phantom Menace has one of the best pure lightsaber fights in Star Wars history.  Darth Maul, played by the talented Ray Park, lends the duel an impossibly fast-paced, acrobatic tinge, completely setting this sequence apart from those of the original trilogy.  The idea was "Here are the Jedi in their prime against an experienced Sith duellist."  And from a technical standpoint, this fight is dazzling.  However, there's zero going on beyond that.  We know basically nothing about Darth Maul, the Jedi know even less, and yet they're furiously trying to kill each other, even though Qui-Gonn and Obi-Wan were specifically instructed by Mace Windu to "unravel the mystery of the Sith."  Qui-Gonn and Maul eventually get killed, and when it's over Obi knows no more about Maul or the Sith than he did going in.  So where does the mystery unraveling part come in?  Remove the lightsabers from this scene and you have.....nothing.


Attack of the Clones has a pair of duels, both of which are totally nondescript and feature a terrible-looking CGI-enhanced stand-in for the 80-year-old Christopher Lee.  Anakin and Obi-Wan double-team Count Dooku, who makes short work of both of them before engaging in one of the silliest battles ever with Yoda.  They each try to attack each other with Force power and then Dooku goes "It's clear this contest will not be settled by our mastery of the Force, but by our skills with a lightsaber."  This line is embarrassingly terrible and belongs in an Ed Wood movie, and the ensuing duel looks like a Warner Brothers cartoon as the CG Yoda flips around like the Tasmanian Devil, undermining Yoda's entire philosophy as established in Empire ("Luminous beings are we, not this crude matter.").  So Clones has plenty of lightsaber action, none of it very good OR character-driven.  Again, what are you left with in this scene if the sabers are taken out?


Then there's Revenge of the Sith, the lightsaber orgasm of the Star Wars films.  Many consider this one of the best films in the series, but I am not one of them.  It's easily superior to Menace and Clones, but that's saying very little, and the lightsaber duels, while at least motivated and informed by character conflicts, are either awkwardly staged (Palpatine vs. Windu & friends), further make a mockery of everything Yoda is supposed to represent (Palpatine vs. Yoda), or so overly convoluted as to become unintentionally hilarious (Anakin vs. Obi-Wan, in a fight that goes on for a solid fifteen minutes and devolves into each of them swinging on ropes and still trying to decapitate each other).  All of these battles could've been truncated (or removed in the case of Mace vs. Palpie) and the film would've been better for it.  Anakin vs. Obi-Wan should've been a very short, hotly contested battle, because once the emotion behind it dissipates (Ya know, because the building they're in is about to be engulfed by lava?), there's nothing to it except two guys swinging laser swords at each other while trying not to fall in the lava.


As for the Disney films, The Force Awakens is the only film thus far that features a sword-on-sword duel, and its gritty, grounded choreography is much more in line with the original films.  No flipping, no lightning-fast twirls, just two characters legitimately trying to kill each other; one of them inexperienced, the other gravely wounded.  This duel to me is so much more engaging than anything in the prequels, because I actually cared about what the characters were going through.  Kylo has just killed his father and is still wrestling with what he's done (not to mention bleeding to death), while Rey is traumatized by watching her potential father-figure die and is terrified of touching Luke's old lightsaber again.  That said, much like in the OT, you could remove the lightsabers from this scene entirely and it would still work because of the conflict.  Kylo wants Rey to come with him so he can teach her how to use her newfound Force power and possibly turn her over to Snoke.  Rey is disgusted by Kylo and wants to avenge Han's death and Finn's injury.  This is a scene of great emotion.


Rogue One has nothing to do with Jedi or really The Force, so obviously no duels there.  Yet many fans consider this one of the best Star Wars films.  The upcoming Solo movie is in the same boat.  Han Solo said himself, "I've never seen anything to make me believe there's one all-powerful Force controlling everything."  Any depiction of Jedi or lightsabers would contradict the character we were introduced to forty years ago.

And finally there's The Last Jedi, which features not one moment of lightsaber-on-lightsaber contact, except during a brief flashback.  And ya know what?  That's okay.  Does there HAVE to be a traditional duel for this to still be a Star Wars movie?  No.  Because the characters settle their conflicts in other ways.  Kylo and Rey could've had a rematch from The Force Awakens, but they're both so ambiguous about their feelings toward each other a straight-up duel would've felt obligatory.  Instead they form a deep connection, hoping to find in each other the cosmic answers they seek, but differing in their objectives.  Rey still believes in The Resistance, while Kylo just wants to tear both sides down and start over.  The two lightsaber-centric scenes instead consist of Reylo fighting off the Praetorian guards (which is still a very badass scene), and Luke finally facing his former pupil, refusing to ever strike him with the saber and revealing he was only a Force projection the whole time (which is just about the purest Jedi move ever depicted in one of these films - "A Jedi uses the Force for knowledge and defense, never for attack.").  Once again it's about what's happening between the characters that makes these scenes work, not the fact that they're wielding lightsabers.


So the upshot of all this is if you're complaining about not enough lightsabers in these new films, you've kinda missed the point of why these duels are there at all.  A great Star Wars movie isn't about two (or more) characters swinging laser swords at each other.  It's about good vs. evil, confronting an enemy and hoping to defeat the perceived evil inside him, if possible WITHOUT cutting his hands or head off.  Obi-Wan never intends to kill Vader in A New Hope, he's just keeping him busy while Luke and the others escape.  Vader isn't trying to kill Luke in Empire, he's trying to seduce him to the Dark Side.  Luke isn't trying to kill Vader in their ROTJ rematch, he's trying to win him back to the Light.  THAT is what these original three saber duels were about, and the sequel trilogy is much more true to that spirit than the prequels ever were.  In TFA Kylo wants Rey to come with him so he can harness her power and impress his boss.  In TLJ Rey wants to turn Kylo back to the good side, and Luke simply wants closure with the student he feels responsibility for.

And don't forget, a Jedi wasn't originally supposed to be a "badass warrior," but a guardian of peace and justice, using force (as opposed to The Force) only when absolutely necessary.  It's only in the prequels that they became action-hero monks (What an odd combination) who whip out their sabers the second they hear a noise.

The thing about lightsaber duels is, sometimes less is more.