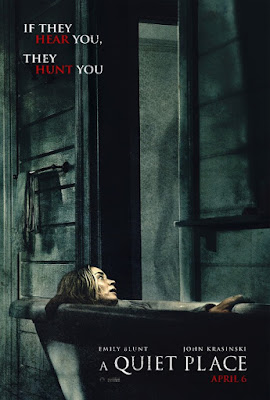 A Quiet Place is directed by John Krasinski and stars himself alongside his real life wife Emily Blunt. The film is about a family’s survival in a world that has been taken hostage by monsters that have an acute sensitivity to sound. Once they hear a sound they attack with lightning speed and are ferocious. Ladies and gents, this film is intense and so good. There are so many great things, it’s difficult to know where to begin. Don’t worry, there are no spoilers here.

Let’s start with the characters. I’m not a big fan of the horror genre, which this film is classified as, mainly because I can’t stand the stupidity of the characters. You find yourself annoyed because they enter a room without turning on a light, or they hear crazy sounds or noises and they continue to walk toward them. Like, hey asshole, your friends are all missing and there’s weird shit happening, so why don’t you fucking leave! A Quiet Place separates itself because the characters are actually intelligent and very careful. Lee Abbott (Krasinski) has done his research on these monsters; their characteristics, strengths, habits. Along with his pregnant wife Evelyn (Blunt), they’ve transformed their house and living situation in order to protect themselves and their two kids. They speak in sign language, mainly because their oldest daughter, Regan, is deaf. They set up a lighting system that will tell you if there’s danger at the house or if it’s safe. They replaced board game pieces with pieces of cloth. They painted the wooden floor of their house where there are no creaks so you know where it’s safe to step. They even set up a soundproof room for when Evelyn gives birth and a soundproof wooden box with an oxygen mask if the baby is crying. Genius! These are the kind of characters you can root for and hope they survive. They’re not morons.

The story line is really well done and relatable. I won’t go into it because it will give some stuff away but Krasinski (who is also a co-writer on this film) really gives this family a good backstory that makes the audience understand some of the actions and feelings of the characters. Really adds a layer to the plot that isn’t too complex but heartfelt and damn near emotional.

When it comes to the acting, this is Emily Blunt’s world and we’re all living in it. She is phenomenal in this film. Maybe her best work to date (Discuss amongst yourselves)? She really dives into this character and brings the sheer terror out from her. She knows this character is smart and with a baby on the way, has much more motivation to do the things she does. She doesn’t just act out of self preservation, but to preserve the life of her baby. The highlight of the film for me was the sequence in which Evelyn finds herself in the bathtub about to give birth, trying not to make a sound. Blunt is brilliant in, not just that scene, but that whole sequence.

While we’re talking about the bathtub scene, let’s talk about Krasinski’s directing which culminates, in my opinion, with that scene. The way he shot that scene, the visuals and the camera angles he uses just really brings out the best in Blunt’s performance, and the tension of that moment in the film. Krasinski does utilize the jump scare motif that is common in horror movies but only in certain parts and isn’t obnoxious with it. He knows that the lack of sound works much better than any jump scare.

The only thing I didn’t really care for was the final scene. I thought it was a little corny and on the nose. Again, I’m not going to give anything away here, I just thought Krasinski could’ve ended the film a little more intelligently. I felt like that final shot didn’t fit the character at all. Maybe it’s just me.

This movie was an intense experience and I loved every second of it. I highly recommend seeing it and seeing it in theaters. Don’t wait til it’s on demand. This is the kind of movie that you should see on the big screen because of the experience. There’s barely any dialogue, the sounds in the film are sparse and you’ll begin to notice that everyone else in the audience of the theater you’re in is just as silent. Waiting with bated breath to see what’s going to happen next. This film does not disappoint.