Welcome to a special Top Ten Things, here at Enuffa.com!  Today is the anniversary of what was for me the most tragic death in wrestling history, that of Owen Hart. 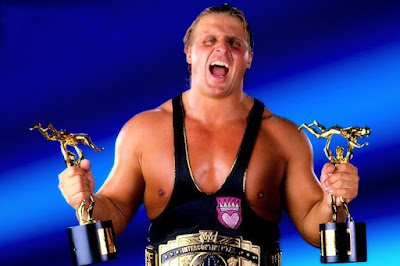 For those of you not familiar (by this point that's probably no one), on May 23, 1999 Owen was the victim of a horrific stunt gone wrong, when the harness in which he was supposed to descend from the ceiling released prematurely, causing Owen to fall 70 feet to his death.  Owen was 34 years old.  Unlike so many untimely pro wrestling deaths, Owen's wasn't the result of drugs or steroids or neglect of his health.  Owen was a happily married family man who had planned to retire early from wrestling to enjoy a quiet life as a father and husband.  I've said for years that if I could go back and save one person in the wrestling business from dying young, it would be Owen.  He deserved to live a long, content life and enjoy the fruits of his success.

In the ring Owen was possibly the most athletically gifted of all the Harts, possessing a natural grace and agility surpassing even Bret's.  Bret may have been more technically sound, but Owen seemed innately suited for pro wrestling, employing a mix of grappling and aerial techniques that made him one of the most well-rounded performers of his generation.

Owen toiled in the WWF undercard for a few years before finally getting a big heel push as Bret's disgruntled little brother.  The two had a legendary feud, tearing the house down every time they met, and as a result Owen became one of the most dependable top names in the company, eventually winning every available heavyweight title except the big one (Whenever I'm asked who was the best wrestler never to win a world title, my two answers are always Owen and Davey Boy).  Then in 1997 Bret and Owen, now both heels, reunited to form the new Hart Foundation stable, prompting the best feud of that year which pitted the American wrestlers (and fans) against the Harts (and basically all non-American fans).  On the back of this unprecedented feud, the WWF churned out must-see television nearly every week, and Owen was a huge part of it all.

After Bret's messy WWF departure (along with Davey Boy and Jim Neidhart), Owen was the only Hart Foundation member left, and as an old-school character he struggled to fit into the new WWF Attitude era.  Owen enjoyed modest success for his remaining time in the company, but was repeatedly asked to take part in sexualized angles with which he wasn't comfortable.  The compromise was repackaging him as a dorkier version of the Blue Blazer (his 1989 persona), hence the fateful ceiling descent on May 23rd.

It's a shame the company wasn't able to find something more dignified for him to do, or wasn't willing to release him from his contract when Bret left.  In either scenario he'd undoubtedly still be with us today.

Owen was a one-of-a-kind talent who left the wrestling industry better than he found it, who was beloved by all who worked with him, and who stayed true to himself and his family in a business where such a thing was increasingly rare.  Two decades later, the wrestling business still feels incomplete without him. 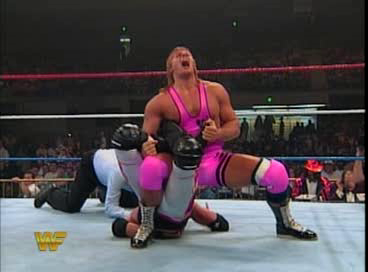 Yeah I know, this match only went 3-1/2 minutes, but holy lord what a match considering.  These two packed about as much action into 217 seconds as you possibly could, delivering one of only two good matches on this PPV.  Owen made the Kid submit with a Sharpshooter in this semi-final match, on his way to becoming the second PPV King of the Ring.  It's a great illustration of what Owen (and X-Pac) were capable of even with severe time constraints. 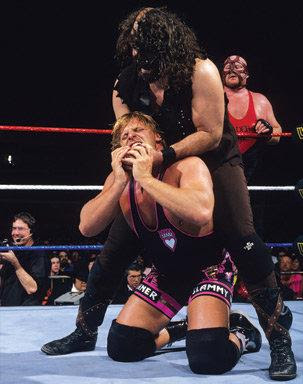 One of the forgotten WrestleMania gems was this rare heels vs. heels Tag Title match, where Owen and Davey had teased splitting up for weeks.  Owen had become jealous of all the attention Davey was getting, particularly after Davey bested him to become the inaugural European Champion.  Between the champs not being on the same page and the physical dominance of Vader and Mankind, it looked like we might see a title change here, but this wild brawl ended unceremoniously with a double countout, as Mankind subdued Davey with a Mandible Claw on the outside.  A better finish would've undoubtedly elevated this match, but as it was I still consider this one very underrated. 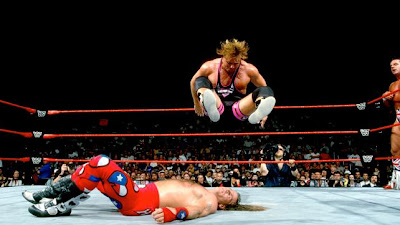 Speaking of Owen and Davey's Tag Title run, that came to an end two months later on an episode of RAW, when uneasy allies Steve Austin and Shawn Michaels teamed up.  This was amid the beginning of the US-Canada feud, and the two Texans decided to band against their common enemies, resulting in this chaotic, high-energy main event.  This was Shawn's first match since surrendering the WWF Title due to injury three months earlier, so that alone made for a white-hot crowd.  After 12 minutes Shawn nailed a Superkick on Davey, allowing Austin to pin him for the belts and ending one of the best Tag Title runs of the decade. 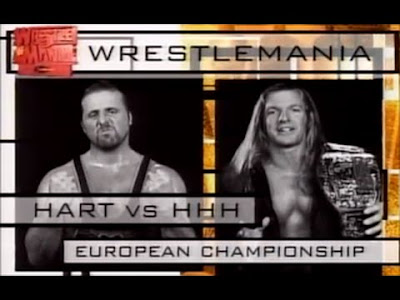 Owen's first great match post-Montreal was this European Title match which nearly stole the show.  Both men were eager to prove themselves as future main eventers, and they worked hard to make this bout memorable.  Hunter's bodyguard Chyna was handcuffed to Commissioner Sgt. Slaughter outside the ring to prevent her from interfering, but late in the match she threw salt in Slaughter's eyes and low-blowed Owen, allowing Hunter to hit the Pedigree to retain.  A return match the following month was comparable to this one, but their WrestleMania bout remains their best together. 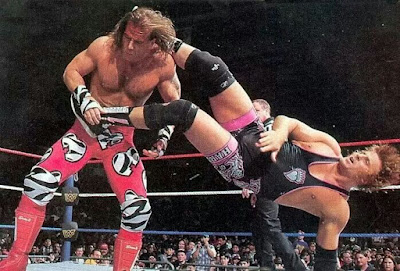 The culmination of a three-month angle where Owen gave Shawn a kayfabe career-threatening head injury took place on the 6th In Your House PPV, in a crisply worked 16-minute match.  On top of their personal rivalry, Owen had challenged Shawn for his WrestleMania main event slot, citing unfinished business with his brother Bret, then WWF Champion.  This bout had multiple finisher reversals and a hot crowd, and ended with Shawn hitting Sweet Chin Music to retain his title shot. 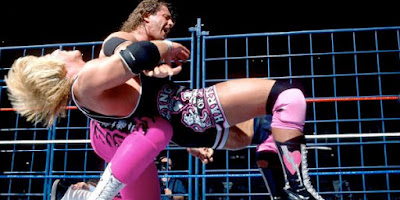 Widely considered one of the best steel cage matches of all time, this main event-quality match somehow got cheated out of headlining SummerSlam (in favor of a dreadful Undertaker vs. Undertaker bore).  Bret and Owen had been feuding all spring and summer, and Owen won the King of the Ring tournament to earn a WWF Title match.  What made this cage match different was the lack of blood and brutality, as the brothers instead focused on athleticism and the objective of exiting the cage.  The match was full of rapid-fire escape attempts and high spots, and went a full 32 minutes before Bret took advantage of Owen's leg being stuck between the cage bars to climb over and retain.  I'd personally have loved to see a Submission match between these two, but in terms of cage matches this one is unique.

During the summer of 1996 WWF Champion Shawn Michaels was embroiled in a feud with Camp Cornette, consisting of Owen, Davey Boy Smith, and the monstrous Vader.  This trio was for me one of the great heel stables of all time and sadly didn't get a long enough run.  Vader, Owen and Bulldog were quite a superteam, and Shawn had to assemble his own trio to combat them.  Originally the lineup was to be Shawn teaming with Ahmed and the Ultimate Warrior.  But due to a contract dispute, Warrior was suddenly out of the company and Shawn recruited his old bodyguard Sid Vicious instead.  The resulting match was a wild six-man brawl with quick action and rapid tags that seemed to never slow down for a minute.  In the end Vader would score an upset pin on the Champion after 24 minutes, ending an incredibly fun main event and earning him a Title shot at Summerslam. 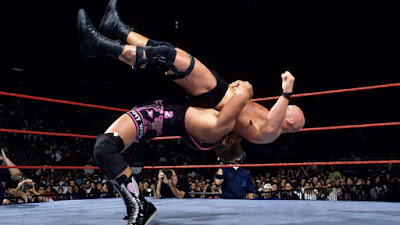 This bout is significant for two reasons.  The obvious one of course is it's the match where Owen nearly broke Austin's neck with a botched Tombstone and ultimately cut his career short.  But the other reason is that up until that move this was a pretty incredible match that easily would've stolen the show had it gone according to plan.  Austin and Owen were in the middle of a very personal feud, piggybacking off Austin's previous rivalry with Bret.  Thus the match was both technically very sound and appropriately gritty, with Owen going after Austin's neck and even trying to dislocate his fingers at one point.  These two were tearing the house down until that damn piledriver, after which Owen had to stall and give Austin time to recover long enough to execute the worst-looking rollup in history for the win.  If only Owen had dropped to his knees instead....

Perhaps the high point of the US vs. Canada feud was this wild team brawl set up in Bret and Owen's hometown of Calgary.  The Hart Foundation stable received a heroes' welcome and faced the mongrel team of Austin, Shamrock, Goldust, Hawk and Animal, who had been cheered in the US but reviled elsewhere.  The Calgary crowd was white hot for this match, and the Hart family members in the front row added an unpredictably personal touch to this all-out war.  After 24 minutes of thrilling action, Owen took advantage of his brother Bruce's distraction to roll Steve Austin up for the three-count, much to the delight of the Canadian faithful.  This match was perfectly executed for what it was, and ignited the new Austin-Owen feud.

The first new championship in 18 years, the European Title was decided in this gloriously athletic RAW match held in Berlin.  The WWF Tag Champs faced each other in the finals of this tournament, delivering an in-ring masterpiece that was high in the running for Match of the Year.  Owen and Davey matched each other hold for hold but also included plenty of personal tension stemming from their teased implosion; Owen claimed Davey was jealous of his two Slammys, while Davey had grown tired of Owen's heelish shortcuts.  This match was the perfect combination of all these elements, and since the pair never officially feuded, it served as an unofficial climax.  After 18 minutes, Davey reversed Owen's victory roll attempt to score the pin and become the first European Champion.  Incredible stuff. 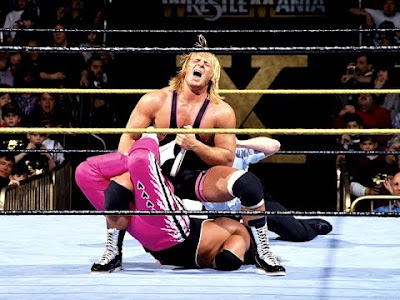 My favorite match of the 1990s pitted the company's top babyface star against his angry little brother.  The two had become enemies at the Royal Rumble, and after two months of incessant goading, Bret reluctantly agreed to wrestle Owen.  Bret had co-won the Rumble match, and along with Lex Luger would get a WWF Title shot at WrestleMania.  But once Luger was announced as Yokozuna's first challenger, it was decided Bret would face Owen in the opening bout.  This stunning display of technical prowess tore the house down and made it nearly impossible for the rest of the card to follow it.  Bret and Owen had worked out a very different match over the weekend but Bret realized Owen's offense would be too flashy and the Madison Square Garden crowd would end up cheering him.  So the plan was changed on the fly, and Owen wrestled a much nastier, heel-worthy style.  The result was twenty minutes of picture-perfect wrestling with a clear babyface vs. heel dynamic, where Owen seemed just a step behind Bret most of the way but managed to pull off the upset win.  Thus Owen was positioned as Bret's #1 contender after Bret regained the Championship later that night.  This is one of those matches that perfectly embodies everything I love about pro wrestling.