Welcome to yet another Top Ten Things, here at Enuffa.com!

With WrestleKingdom 13 in the books and the fantastic match that kicked off that show, I got to thinking about my favorite PPV opening matches over the last 35 years or so.  I eventually narrowed it down to 25, and in a fairly agonizing process, managed to pick my favorites.  Like a killer opening song on an album, a great opening match can instantly grab your attention and set the tone for the rest of the evening.  It gets the live crowd excited, which in turn lends more energy to the rest of the PPV.  The quality of the opening bout can leave almost as big an impression as that of the main event; if a show starts well and ends well you tend to remember it as a damn fine show (I do anyway), even if the stuff in the middle isn't so hot.  At the very least a great opening match makes me want to watch the show a second time.  Most PPVs tend to feature shorter bouts to kick things off, but every so often the first match either steals the show outright or comes pretty damn close.  Here are ten such examples..... 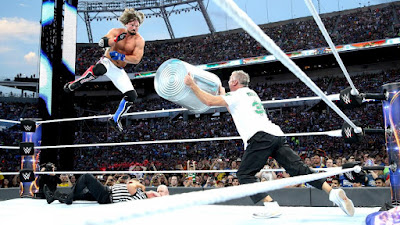 The main card of the 2017 edition of WrestleMania kicked off with a match I wasn't at all happy about.  AJ Styles, by far the most accomplished star in the company over the previous 14 months, was saddled fighting Vince's son instead of tearing it up with someone of his caliber.  But I'll be damned if it wasn't incredibly entertaining.  AJ was amazing as usual, and Shane had his working shoes on just trying to keep up.  Many of the spots were over-the-top, including Shane countering AJ's 450 splash into a triangle choke, Shane missing a Shooting Star Press, AJ trying the Van Terminator but running into a trash can, and Shane doing his own Van Terminator.  AJ finally took the win after hitting the Phenomenal Forearm, capping off what was shockingly the best match of the night.  This match proved that AJ Styles could have a good match with anyone, and also earned AJ the company's permanent stamp of approval. 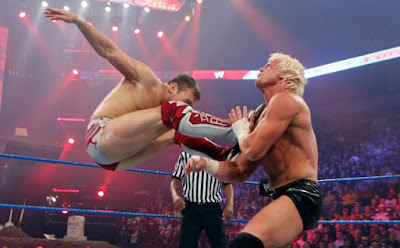 Probably D-Bryan's first true standout match in WWE was this sleeper hit to kick off the second and final Bragging Rights PPV.  By far the best match on the show, this US Champ vs. IC Champ bout allowed Bryan to show off his technical prowess against an opponent who could hang with him move-for-move.  This see-saw match went a thrilling 16 minutes, including a false finish where Ziggler seemed to have won the match but Bryan's foot was on the rope, before Bryan tapped Ziggler out with the LeBell Lock.  The pair followed it up with an equally good rematch the next night on RAW.  At year's end, WWE cited this as one of the best matches of 2010, ranking it second (I believe) only to Shawn Michaels vs. The Undertaker.  This was the first instance of the company openly showing appreciation for Bryan's abilities. 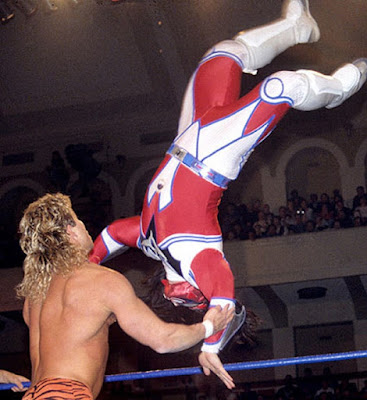 The second SuperBrawl PPV, the best in the series, had the show stolen by this groundbreaking opening contest for the newly minted WCW Light Heavyweight Title.  This 17-minute bout was full of great false finishes and big high spots, demonstrating this wonderful alternative to the norm known as cruiserweight wrestling and showcasing a style of wrestling North American fans weren't yet accustomed to.  Pillman won with a bridging leg cradle after Liger missed a top-rope splash, regaining the short-lived championship.  While Jr.-style wrestling wouldn't catch on for a few more years, this match served as one of the templates. 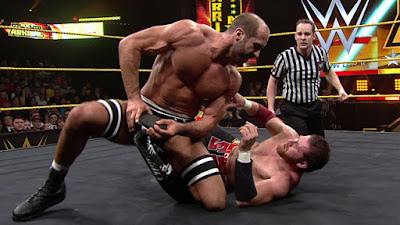 The inaugural NXT TakeOver show wasn't called TakeOver at all.  Known as Arrival, this WWE Network special effectively launched the NXT brand as we now know it.  Fans looking for something different from WWE's main roster were treated to a stripped-down, wrestling-heavy event featuring the stars of tomorrow.  The show opened with an incredible 22-minute war between Cesaro and Sami Zayn, which brought to mind both men's ROH work.  The counters here were off the charts as both guys pulled out every move they could think of (one of the most memorable spots was Sami going for his through-the-ropes swinging DDT only to be countered by a vicious European uppercut).  The match told a great story of Cesaro being the overconfident bully and Zayn being the determined underdog who refuses to stay down.  Cesaro eventually won the match with a Neutralizer but Zayn earned his respect (and a few WWE stripes) with a consummately gutsy performance.  This is the match that introduced so many of us to the "developmental brand" phenomenon known as NXT. 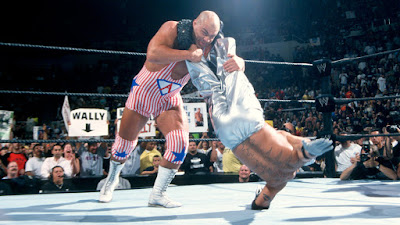 Mere weeks after Rey Mysterio's WWE debut, he and Kurt Angle were tasked with opening what would turn out to be the greatest SummerSlam card of all time.  These two were given a scant nine minutes but filled it to the brim with all kinds of awesome.  Mysterio was all about showing what absolutely astounding things he could do in the ring, while Kurt Angle played the bully ring general who was put off-balance by Rey's unorthodox style.  Eventually Angle's unparalleled technical ability was too much for the lucha firecracker, and he snared Rey in the ankle lock for the tapout win.  This match for my money stole the show, and on a show this good that's saying a lot. 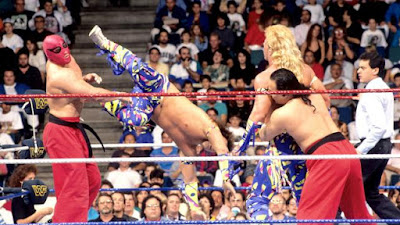 For me the best match of 1991, quite unexpectedly, was this tag team showcase to kick off the Royal Rumble.  These two teams had an underwhelming feud in 1990, but it climaxed with this nineteen minutes of simply spectacular action.  I recall this being the moment when I really started to appreciate The Rockers, Shawn in particular.  The structure was your classic three-act tag team match, but it never dragged, building to a frantic pace by the end.  This bout has to be considered the Rockers' creative peak before their infamous split a year later. 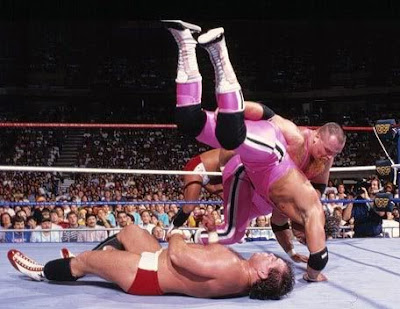 One of my all-time favorite tag team matches is this dream clinic between two of the most technically proficient tandems of all time.  Anderson and Blanchard had just won the WWF Tag Titles, but since the match had already been signed they opted not to put the belts on the line.  Instead this was just for bragging rights, as the Hart Foundation hoped to earn a title shot with a win.  Bret and Jim controlled much of the bout, Bret's incredible dexterity keeping both Brain Busters at bay.  It would take multiple underhanded tactics for Anderson and Blanchard to gain control, and after Neidhart powerslammed Bret on top of Tully (a memorably innovative spot), Bobby Heenan distracted the referee long enough for Arn to come off the top rope and score the illegal pin on Bret.  These were the two best teams in the company at the time and they tore the house down, stealing the show from two other great bouts (Warrior vs. Rude and a Santana/Rockers vs. Martel/Rougeaus six-man tag).


3. Kota Ibushi vs. Will Ospreay - WrestleKingdom 13 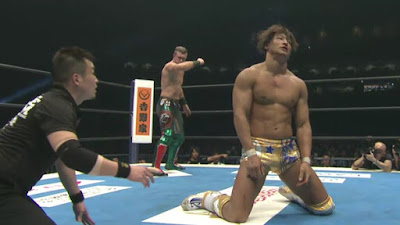 Perhaps the most anticipated match of WrestleKingdom 13, this dream match was fast paced and dazzling as expected, with loads of back and forth offense, some intense striking battles, and tons of athleticism as only these two can deliver.  The story being told was Ospreay wanting desperately to face his idol Ibushi, and having to unleash his killer instinct to get the job done.  My favorite spot involved the two of them trading strikes while Ibushi was hanging upside down from the turnbuckles; such an inventive take on the usual Strong Style toe-to-toe.  After eighteen minutes of wild action, Ospreay kicked out of a Last Ride and avoided the Kamigoye knee, knocked Ibushi loopy with a driving elbow to the head, and landed the Stormbreaker to win the Never Openweight Title and announce himself as a major factor in the heavyweight division. 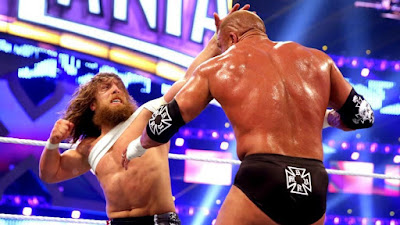 The YES movement took over WrestleMania in 2014, starting with this much-anticipated opening match for a shot at the WWE Title.  Both guys played their roles to perfection and told a helluva Face-In-Peril story for 26 minutes.  Hunter tried to bully Bryan into submission while Stephanie McMahon on the outside continued belittling the unlikely hero.  Triple H worked over Bryan's arm for much of the match and tried to finish him with a Pedigree, but Bryan kicked out and hit his running knee for the clean win and a trip to the main event (where he of course won the WWE Title).  The fallout of this show was ruined by an untimely injury, but this match and the main event were a perfect bookend to a wonderfully told one-night story. 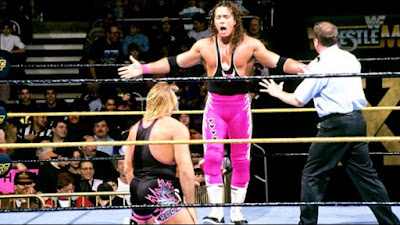 My favorite match of the 1990s pitted the company's top babyface star against his angry little brother.  The two had become enemies at the Royal Rumble, and after two months of incessant goading, Bret reluctantly agreed to wrestle Owen.  Bret had co-won the Rumble match, and along with Lex Luger would get a WWF Title shot at WrestleMania.  But once Luger was announced as Yokozuna's first challenger, it was decided Bret would face Owen in the opening bout.  This stunning display of technical showmanship tore the house down and made it nearly impossible for the rest of the card to follow it.  Bret and Owen had worked out a very different match over the weekend but Bret realized Owen's offense would be too flashy and the Madison Square Garden crowd would end up cheering him.  So the plan was changed on the fly, and Owen wrestled a much nastier, heel-worthy style.  The result was twenty minutes of picture-perfect wrestling with a clear babyface vs. heel dynamic, where Owen seemed just a step behind Bret most of the way but managed to pull off the upset win with a Victory Roll.  Thus Owen was positioned as Bret's #1 contender after Bret regained the Championship later that night.  This is one of those matches that perfectly embodies everything I love about pro wrestling, and it remains the greatest opening match of all time.

Posted by Justin Enuffa Ballard at 11:49 AM