The History of WWE Survivor Series (2016)

Minus a bafflingly abbreviated main event, WWE gave me a birthday present in 2016 by bringing back the real Survivor Series concept....


For the 2016 edition WWE finally took the Survivor Series concept back to its roots (mostly), assembling three huge traditional elimination matches - one for the men, one for the women, and one for the tag team division.  All three delivered on some level, laying the foundation for what turned out the best main roster PPV of the year.  Additionally there were three singles matches, two of which also delivered, and one which just may be the most baffling thing of any kind, in any medium, in any universe, ever.  Advanced trigonometry makes more sense to me than did this main event.  But before I start complaining about a show that I frankly quite enjoyed overall, let's talk about the good stuff.


The show opened with the Women's elimination match pitting RAW Champ Charlotte, Sasha Banks, Bayley, Nia Jax, and Alicia Fox against Smackdown Champion Becky Lynch, Naomi, Alexa Bliss, Carmella, and Natalya, subbing for Nikki Bella who was attacked by a mystery person backstage (later revealed to be Nattie herself to get into this match).  This match was a lot of fun despite a slightly rushed pace.  The women got a solid 17 minutes to work with and multiple feuds played out a bit.  The RAW vs. Smackdown rivalry has never, and will never work as a believable feud, but at least in a few cases the babyfaces and heels were booked as very reluctant partners.  After Bayley won the match for her team, her co-survivor Charlotte beat the holy hell out of her, hammering home that the pleasantries were over.  Pretty much everyone in this match got time to make an impression, particularly Nia Jax who was booked like a monster, eliminating Naomi by countout after beeling her off the apron onto the floor.  This match easily ranked high on the list of best women's Survivor Series bouts, right up there with the Team Moolah vs. Team Sherri match from 1987.  A great way to open the PPV. 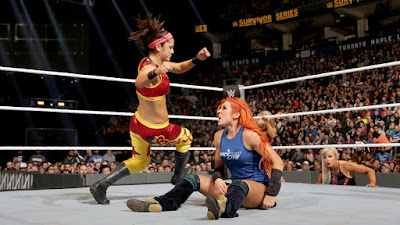 Next up was the Intercontinental Championship, as The Miz, fresh off regaining the strap the previous Tuesday defended against Dolph Ziggler's scheduled opponent, Sami Zayn.  I'm still not sure why Miz was booked to win back the Title at the last minute, as Zayn vs. Ziggler surely would've been the superior contest.  But this was quite alright too.  As I've said before, Zayn is nigh incapable of having a bad match, and The Miz was looking better than ever.  So this gelled nicely.  Miz eventually won in classic heel fashion.  Zayn had slapped on a figure four and Maryse rang the bell to distract both Zayn and the referee, allowing Miz to roll Zayn up for a cheap pinfall.  This was a cheap finish, but an appropriate one for Miz's character.
The second elimination match pitted the RAW tag teams against the Smackdown tag teams, and after an infuriating first minute or so which saw two pointlessly quick eliminations (Fandango was handing out "fashion police tickets" to all his opponents and The New Day nailed him with Midnight Hour, then Jey Uso superkicked Kofi Kingston - Breezango and The New Day were gone), the match settled into a pretty great contest befitting the 10-on-10 tradition.  I will never understand the overuse of quick eliminations to start off these matches; they're only shocking when used sparingly.  But most of the teams got some solid ring time.  American Alpha in particular were showcased pretty well, though I'd have liked to see them make it to the end.  The final five minutes of this were excellent, as The Usos battled breathlessly with Sheamus & Cesaro, who despite still not being quite on the same page, managed to outlast their Smackdown opponents for the win.  Cesaro then tried to shake Sheamus's hand and was rebuffed before celebrating with the crowd.  Nice stuff here. 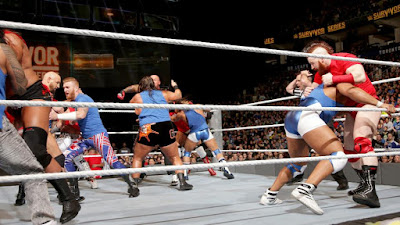 Another very enjoyable singles match followed (and was then ruined at the end), as Cruiserweight Champion Brian Kendrick faced Kalisto.  This was nowhere near Cruiserweight Classic territory but was still easily the best CW Title match of the new era to that point.  Kendrick and Kalisto meshed very well and put together a fairly fast-paced bout that got room to breathe.  Kalisto was on the verge of winning the belt and bringing the entire CW division to Smackdown (which would make sense given the new 205 Live show airs AFTER Smackdown), then some dickhead decided Baron Corbin should return from kayfabe injury and break up the match.  I still find it baffling that WWE would elect to resurrect the CW division only to treat them like total geeks.  This booking served no purpose other than to further the Corbin-Kalisto feud and made the CW title an afterthought as usual.  What a waste of a good match.

The highlight of the night, imperfect though it was, got the semi-main event slot, as Kevin Owens, Chris Jericho, Seth Rollins, Roman Reigns, and Braun Strowman faced AJ Styles, Dean Ambrose, Randy Orton, Bray Wyatt, and Shane McMahon (subbing for the "injured" Baron Corbin, who was back from injury anyway - figure that one out).

Lemme get something out of the way first: Shane McMahon needs to stop wrestling.  Yes, most of his involvement in this match was entertaining, but at multiple points he either caused a miscue, called a very loud audible, or just looked stilted and awkward.  But worse, he got seriously banged up by a jumping spear from Reigns, to the point that he forgot to keep his shoulders down for the intended pin.  Reigns sold exhaustion as he covered Shane, and Shane vacantly rolled to his side before the referee deemed him too injured to continue.  This was a pretty horrifying moment that didn't need to happen if they'd just left Corbin in the match as originally planned.  Shane is too old at this point to be taking these crazy bumps.  I have no interest in watching him wrestle, let alone kill himself in the ring.  WWE of course learned nothing from this, as Shane would continue wrestling sporadically all through 2017. Okay, all that aside, I dug this match a lot.  It was epic, it had drama, it had chaos, it had multiple story threads, it was everything I want out of an old school Survivor Series match.  Ambrose and AJ couldn't get along and AJ got Ambrose eliminated.  Braun Strowman was booked like a monster whom Team Smackdown could only oust from the match via cheap countout.  Jericho and Owens let their overly close relationship, and Jericho's "List," cause both their eliminations.  Ambrose got revenge on AJ and briefly reunited with his former Shield pals to put Styles through a table (The crowd went apeshit for this).  Orton sacrificed himself at the end by shoving Wyatt out of the way of an oncoming Reigns spear, allowing Wyatt to flatten Reigns with Sister Abigail for the win (Wyatt hadn't looked this effective in years).  Warts and all, and at an arduous 53 minutes, this bout was as fitting a Survivor Series main event as they've likely ever done.  Too bad it wasn't actually the main event.

Instead the main event slot went to a 1998 Goldberg squash that lasted 86 seconds.  Eighty.  Six.  Fucking.  Seconds.  After hyping the ever-loving shit out of this match for two months, WWE decided that Brock Lesnar, built up since 2013 as an unbeatable, planet-devouring leviathan, should job to a 49-year-old who hadn't laced up a pair of boots since Bush's first term, in less time than it takes to nuke a bag o' rice.  Lesnar got nary a shred of offense in after muscling Goldberg into a corner.  Goldie shoved Lesnar down, speared him as he got up, speared him again, and jackhammered him for the win.  And the crowd went atomic.  And I found the entire scene so flummoxing I didn't know whether to drink or jump out the window (Fortunately cooler heads prevailed and I chose the former).  Can someone explain to me, in an era where the current roster is struggling to get over, at a time when WWE consistently presents the stars of the 90s as far superior attractions to those of today, how it makes a goddamn lick of sense for the Streak-conquering, Cena-crushing, Orton-murdering Brock Lesnar to get squashed by someone who gains exactly zero from this win, as opposed to a Roman Reigns or a Seth Rollins or a Cesaro or a Bray Wyatt or a Samoa Joe.  Once again Vince stops the Brock train dead in its tracks in a way that gets no one over (a la 2002 when Big Show snapped Lesnar's undefeated streak and was curtain-jerking at the Royal Rumble two months later).  I don't even care that much that Lesnar lost to Goldberg, I just can't wrap my head around having it happen in 86 seconds.  As it turned out Goldberg was banged up from training and Vince didn't want him to hurt himself or expose how limited he was.  MAYBE DON'T HAVE HIM BEAT LESNAR THEN???  Goldie of course went on to kill Kevin Owens (and his push) dead three months later win a 21-second Universal Title win, and finally had as close to a real match as he was capable of at his age at WrestleMania 33, dropping the belt to Brock.  And three years later they repeated that debacle with much worse results as Goldberg beat The Fiend for the title and dropped it to Braun.  This whole Goldberg run was a gigantic waste of time.


Alright, enough griping from me.  As long as you shut off this PPV before the last five minutes, Survivor Series 2016 was a helluva fun show with three good-to-excellent elimination matches that made up the bulk.  Had the main event not been such a shitshow this would be an A-PPV.  At least they made Survivor Series feel Big Four for the first time in ages.  I kinda loved most of this show in spite of some glaring main roster problems, and despite the pointless main event I'm inclined to be generous with my final rating.

Best Match: Men's Elimination Match
Worst Match: Lesnar vs. Goldberg
What I'd Change: Aside from having a MATCH in the main event, I never would've put Shane in there, I would've given the CW match a real finish that resulted in Smackdown gaining the division, and I would've cut the quick eliminations in the Tag Teams match.  Most of those complaints have more to do with big picture problems and less to do with the actual work done on this show.
Most Disappointing Match: Despite my lower-than-dirt expectations for Lesnar-Goldberg, they amazingly managed to STILL disappoint me.  Quite an accomplishment.
Most Pleasant Surprise: That none of the elimination matches got criminally shortchanged
Overall Rating: 8.5/10
Better than WrestleMania 32, SummerSlam 2016 and/or Royal Rumble 2016? - Yes on all three