The History of WWE Survivor Series (2020)

Survivor Series 2020, or as I like to call it, The COVID One, was yet another mixed affair, with a couple of standout matches and a bunch of badly booked fluff from a company that can't seem to avoid bad booking.  Of the six bouts on the show, three were worth a look, three were really not, and the whole card took a backseat to yet another Undertaker nostalgia-wank.
The show opened with the men's elimination match, not really ever a good sign.  Team RAW included AJ Styles, Braun Strowman, Keith Lee, Sheamus and Matt Riddle, while Smackdown's squad was comprised of Seth Rollins, Kevin Owens, Jey Uso, Baron Corbin and Otis.  Gee, which of these teams looks stronger?  Seth was doing his stupid cult leader gimmick at the time and sacrificed himself to a Sheamus Brogue Kick to be the first one out.  Lovely.  The idea was that his elimination was for "the greater good," but I'm still trying to figure out what good came out of it.  Kevin Owens ran wild with a series of Stunners on people but of course got taken out by AJ's forearm - why is the whole "run wild and then get pinned" deal the only way WWE knows how to eliminate someone?  By this point it was very obvious who was winning this, as Smackdown was left with Jey Uso and a couple dorks.  Baron Corbin got eliminated by Riddle, while Strowman powerslammed Otis to take him out.  This left Jey in a five-on-one, and after a flurry of superkicks he was pinned with a Keith Lee spirit bomb.  A clean sweep for RAW.  Anyone who's read this series knows how much I hate clean sweeps.  This match felt pointless. 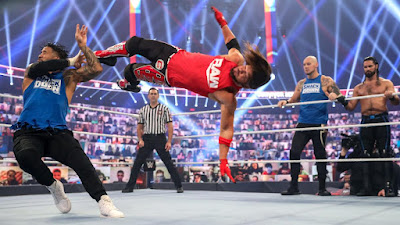 Next up was a mild improvement, as The New Day faced Street Profits in a battle of tag team champions.  The match was pretty fast-paced, with New Day controlling the early minutes and taunting their would-be successors.  Dawkins and Ford rallied though, and after some exciting, crowdpleasing nearfalls the Profits took the duke with a Doomsday Blockbuster finish, upsetting the vaunted New Day.  This was fine.
US Champ Bobby Lashley then faced Intercontinental Champ Sami Zayn in a totally one-sided bout, begging the question, why was Sami the I-C Champ instead of say, Nakamura?  Sami stalled for much of the match, attempting to either leave or get Bobby disqualified (at one point deliberately tripping over MVP's leg and pleading with the referee to end the match).  MVP tossed Sami into the ring and Lashley applied the Hurt Lock to get the easy tapout.  Waste of time, this one.
Finally something really good happened on this show, as Asuka faced Sasha Banks once again.  These two had a fast-paced battle with lots of good counterwrestling, and it stood out from the rest of the PPV.  Banks went for the Bank Statement early but Asuka calmly blocked it and wriggled free, a very MMA-esque moment.  By contrast whenever Asuka would go for a submission Banks appeared to panic.  Late in the match they traded finisher attempts with neither able to fully lock them on.  A series of rollups and counters followed, and Asuka hit a head kick, went for a running knee, and got cradled by Sasha for the win.  I liked this match a lot; best thing on the show for sure. 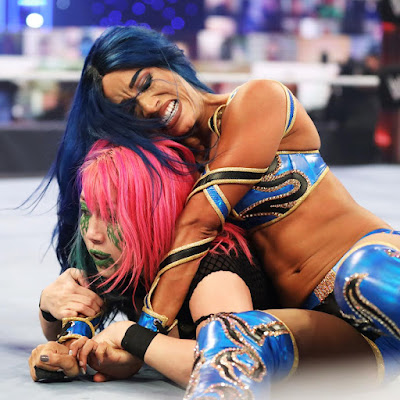 The women's elimination match was next, and shockingly this was given more time than the men's match.  Even more shockingly considering how weak the RAW side was, this match was pretty good for a while.  Bayley led a fairly loaded Smackdown team of Bianca Belair, Natalya, Ruby Riott and Liv Morgan against Shayna Baszler, Nia Jax, Lacey Evans, Peyton Royce and Lana (whose teammates ordered her to stand on the ring steps the entire match because she stinks), and amazingly the first elimination didn't arrive until the ten-minute mark.  I actually like when they do this kinda thing, as it makes the first elimination actually mean something.  Sadly Bayley was the first one gone after a Peyton Royce spinning brainbuster.  Natalya evened things up by submitting Peyton in the Sharpshooter (after botching a surfboard).  Nattie was soon out herself after Lacey Evans dispatched her with a Women's Right.  Shayna had some exchanges with Ruby and Liv, culminating in Shayna locking Ruby in the Kirafuda Clutch.  Ruby attempted the Bret Hart backroll counter but passed out in the process and Shayna pinned her.  Liv Morgan got some time to shine, taking out Lacey with a great-looking Crucifix Bomb and attempting to hold her own with Nia Jax, but falling to a Samoan Drop.  Side note: I like Liv Morgan a lot and the company should do much more with her - she has a great look and can go in the ring, she just needs more experience and guidance.  This left Bianca alone against the Women's Tag Champs and Lana.  Now, conventional booking wisdom would be to have Bianca run the remaining table so as to come out of this looking like a star, but with Vince's ping-pong-ball-like attention span that's not what they did here.  Instead Shayna locked the choke on Bianca, who made the ropes, but Shayna refused to let go and got disqualified.  Because reasons.  Then Bianca and Nia brawled outside the ring and both got counted out, leaving as the sole survivor, yeah that's right, Lana.  "It's such good shit."  Crap like this is why no one takes Vince McMahon seriously as a promoter anymore.  The company clearly had plans for Bianca since she went on to win the Royal Rumble two months later, but rather than start that build here they did a dumb comedy finish that got no one over.  This was a pretty good match until the last two minutes.  Vince is a fucking clownshoe.
The main event was a fine WWE-style match, as Universal Champion Roman Reigns faced WWE Champion Drew McIntyre.  This was of course when Drew was still being protected, before his one-sided feud with Bobby Lashley made him just another one of the guys.  The match started out with the "big match face-off" that a live audience would usually pop big for, but since there was no live audience and the crowd noise had to be piped in, this came off as completely idiotic.  It was the equivalent of Vince as a child playing with his wrestling toys and making the crowd noises himself.  Anyway the match started off very methodically with the two guys trading headlocks, a la 80s NWA.  Reigns took control early but Drew kept coming back with counters, ducking Superman punch attempts and countering Samoan Drops.  Drew eventually locked in a Kimura but Roman got to the ropes and sold his arm for much of the match.  The action spilled to the outside where Roman hit two Samoan drops on the announce table, the second of which broke it.  Roman rested on the ring apron as Drew climbed to his feet, and then speared him through the barricade.  Roman tossed him back in and went for the cover but Drew kicked out.  Roman hit a spear but Drew kicked out again.  Roman went for another but Drew countered with a Claymore Kick out of nowhere, knocking Roman into the referee.  Jey Uso ran in, Roman hit a low blow and Jey superkicked Drew.  Roman locked in a guillotine choke as a second referee ran down and stopped the match.  This was very good, though the shenanigans in the finish knocked it down a peg.  For a big man-type wrestler Drew McIntyre is an overachiever.  I'm rarely interested in his matches going in, but he always pulls off a fine performance.  Too bad the company spent most of 2021 making him not special. 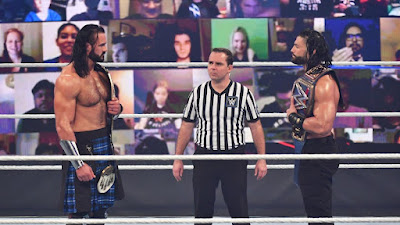 The final segment was an extended Undertaker tribute, featuring a long video package set to Metallica's "Now That We're Dead," and cameos from numerous Taker opponents and friends.  Vince McMahon came out and gave a tribute speech and introduced Taker, who essentially just came out to say, in character, that it's time to retire the character.  This would've meant a lot more had WWE not spent the last 15 years on a nostalgia circlejerk with multiple Undertaker tributes and retirements (They literally had a Taker anniversary thing five years earlier).  It's also kinda sad when none of the wrestling matches are treated with as much importance as an Old Guy Retiring segment.  Once again, this is why no one today is as over as the stars of yesteryear.
So yeah, not a great show by any means.  Three of the matches are worth your time, three others not so much.  The women's elimination match could've been added to the former list had an idiot not booked it.  Asuka and Sasha are awesome.  Drew is pretty great.  Roman is alright.
Best Match: Asuka vs. Sasha
Worst Match: Lashley vs. Zayn
What I'd Change: Have Bianca actually outlast Nia, Shayna and Lana so she comes off like a big star.  Do something better with the men's elimination match.
Most Disappointing Match: Men's elimination
Most Pleasant Surprise: Most of the women's elimination was pretty good
Overall Rating: 6/10
Better than WrestleMania, SummerSlam and/or Royal Rumble 2020? - Probably, probably and no.
And that brings us to the present day.  I hope you've enjoyed another series of WWE History lessons here at Enuffa.com!


Before I go though, here are my Top Ten Survivor Series PPVs and Top 20 SS Matches of all time....