The first-ever two-part WrestleKingdom is in the books, and it was overall a helluva weekend of pro wrestling.  The two shows played like a double album of sorts, with the first disc containing by far the two best tracks, and the second disc being a more solid overall album.  To break things up I'll review each show separately, so stay tuned for my Night Two review coming soon. 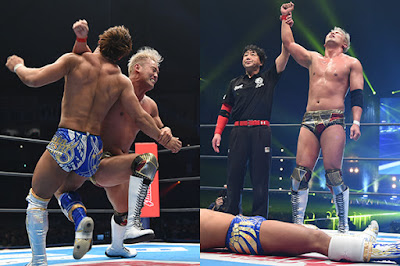 Night One took a while to really get going, thanks to three consecutive 8-man tags.  I would've liked another singles match in one of these slots rather than just trying to get everyone on the main card.  But the three openers were inoffensive at worst and were kept short.  The first of these was the best, thanks to Jushin Liger and his old-school pals (plus Taguchi) having one last romp to show off their stuff.  Everyone in the match looked great for their age.  After nine minutes Taguchi hit Liger with a Buma ye (that's Nakamura's finisher except with a hip attack instead of a knee), followed by a Dodon for the three-count.  I'd have had Liger win the Night One match, because why not?  He's in there with mostly other old-timers anyway, there's no torch to pass in this match.  But this was a fun opener.  **1/2

Next was Suzuki-Gun (led this time by Zack Sabre Jr. to hype his Night Two singles match) vs. LIJ (minus Naito of course).  This was technically the best of the 8-man tags but still too short to amount to much.  The story was Zack vs. Sanada, and Zack won the match by tying Bushi up in knots while smiling sadistically at his Night Two challenger.  This was fine.  **1/4

The final 8-man pitted Goto, Ishii, Yano and Yoshi-Hashi vs. Bad Luck Fale, Chase Owens, Yujiro Takahashi and NEVER Champ Kenta, in another match to hype a Night Two singles bout.  This was pretty basic, with the biggest spot being Ishii hitting a hard-fought brainbuster on Fale.  After all eight men started brawling in and around the ring, Goto hit the ushigoroshi followed by the GTR on Takahashi for the win.  Another serviceable but forgettable undercard match.  **
The show started in earnest with Match 4, for the IWGP Tag Titles.  Guerrillas of Destiny and FinJuice had a very enjoyable tag bout that was pretty much all action.  Dave Finlay looked really good here, finally coming into his own as a full-fledged roster member.  Juice looked good in terms of workrate but really needs to change his look back to what it used to be.  His hair is really awkward-looking and the 70s porn stache doesn't work for him.  Anyway this match had a ton of back-and-forth, with numerous nearfalls and a bit of Jado interference at the end, before Juice knocked Tonga loopy with a left hand and Finlay hit the Acid Trip to win the belts.  I'm curious how long FinJuice will get to hold them; usually WrestleKingdom features a Tag Title change only for the established team to win them back in February or March.  ***1/4

The next match was a big change of pace, as Lance Archer and Jon Moxley had a wicked hardcore-type brawl for the first real standout of the show.  This was one of the better hardcore matches I've seen in NJPW.  Archer at one point hit his Blackout move, smashing Moxley through four chairs.  Later he tried to suffocate Moxley with a claw hold over a plastic bag.  There was one nice moment where Archer tried to do a top rope walk while holding a kendo stick, but slipped.  Moxley immediately covered it by pulling the stick out of Archer's hands and whacking him with it.  The match ended at 14 minutes when Moxley hit the Death Rider DDT off the apron through a pair of tables on the floor, which cut up Archer's arm something fierce.  This was a brutal-looking finish.  Moxley made it to his feet before the ten count, but Archer couldn't.  I wonder how long Mox keeps the US Title, or if AEW will make any mention of it.  This was a really fun, wild brawl.  ***3/4 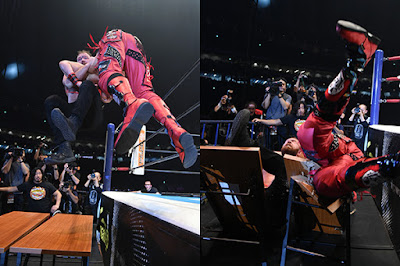 The first of two instant mega-classics was up next, as Will Ospreay defended the Jr. Title against the returning (and sorely missed) Hiromu Takahashi.  These guys absolutely tore the house down, with a dazzling combination of lightning fast, creative Jr. moves and great storytelling.  Ospreay targeted Takahashi's injured neck for most of the match, drawing more than his share of boos from the crowd.  Takahashi teased a new finisher at the outset, so I spent a lot of the match looking to see what move he'd pull out.  Both guys hit all their big moves, but Ospreay attempted the Hidden Blade twice before actually connecting with it late in the match, and at that point it meant a ton.  But when he went for the Stormbreaker Takahashi countered with a destroyer (the third of the match), followed by the Time Bomb and his new finisher (a variation on the Air Raid Crash) to regain the Jr. Title.  Just a phenomenal 25-minute cruiser match with a great story, and a wonderful return for Takahashi.  If he's lost a step since his neck injury you wouldn't have spotted it here.  On basically any other show this would've been Match of the Night.  ***** The semi-main event for the Intercontinental Title was probably the disappointing match of the night, though it was still very good.  Jay White vs. Tetsuya Naito went a whopping 34 minutes and there were moments in the last third where it felt like they'd exhausted their movesets and weren't sure what to do next.  I need to rewatch both shows again and maybe I'll like this match better the second time (I reserve the right to revise my star ratings).  Both guys played mind games early on, White continued playing the asshole heel to a tee, with lots of shortcuts and multiple interference attempts by Gedo.  I think given how the White-Ibushi match played out on Night Two they should've kept the shenanigans to a minimum in this match.  I get that White is just being an old-school villain but too much of that stuff starts to resemble American wrestling.  Anyway this match built to a pretty great peak by the end, with traded finisher attempts, White kicking out after a Destino and going for his finisher but falling to another Destino.  Naito regained the I-C Title and the place went nuts.  As a semi-main event this was very good, but it was sandwiched between two amazing matches and went about eight minutes longer than it probably should have.  On balance though I'll give it ****. Sweet Jesus, this main event.  Kazuchika Okada proved once again why he's the best in the world, against an opponent who isn't far behind him, in Kota Ibushi.  This match went an epic 39 minutes that felt like 25.  They started out slow and methodical, exchanging grappling, but escalated over the first 10-15 minutes and started hitting big moves.  One scary spot involved Ibushi going for his Pele kick, where Okada was supposed to catch him, but Okada was late and Ibushi basically landed right on his head before Okada picked him up for a Tombstone attempt.  About halfway through the match Ibushi snapped, having absorbed quite enough punishment, thank you.  His expression went blank and he no-sold every strike Okada threw at him, before totally unloading with fists and drawing some boos.  The last ten minutes were masterful, with both guys going for their big moves and collapsing numerous times due to exhaustion.  Okada finally hit a Rainmaker and covered, but Ibushi kicked out (becoming the fourth man to kick out of said finisher).  Okada hit two more Rainmakers and went for a third, but Ibushi countered, hit a V-Trigger and tried for the Kamigoye (a move he never landed in this match), but was reversed into another Tombstone/Rainmaker combo to give Okada the win.  This was goddamn incredible, right up there with last year's Omega-Tanahashi main event.  Ibushi will undoubtedly win the IWGP Title in the future, but this just wasn't his night.  Meanwhile, Okada adds yet another all-time classic to his resume.  Good luck topping this match in 2020, world.  ***** 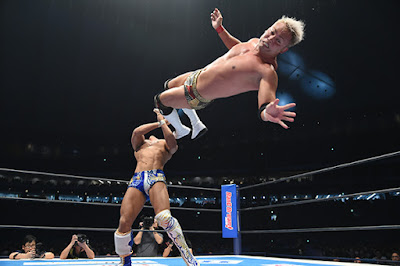 Night One may have bit a little uneven and thus not quite on par with basically perfect shows like WK9 and 10, but any show that has two five-star classics is automatically a great PPV, and this show also boasted three very good undercard matches.  I wish White vs. Naito had reached ****1/2 territory but it fell a bit short for me.  Regardless, Night One was pretty great.


Best Match: Okada vs. Ibushi
Worst Match: Chaos vs. Bullet Club
What I'd Change: Streamline the semi-main event a bit and maybe move the Jr. Tag match to this show to balance the two lineups.
Most Disappointing Match: White vs. Naito, good as it was, could've been better.
Most Pleasant Surprise: No real surprises, both matches I expected to be great were.
Overall Rating: 9/10