If Night One of WrestleKingdom 14 was like an album A-side featuring two monster hit singles, Night Two was the B-side with deeper cuts but more consistent quality from song to song.  Of the eight matches on this show I'd only rate one below three stars, and while there was nothing on the level of the Ospreay-Takahashi or Okada-Ibushi classics from Night One (which would've been nothing short of miraculous), we got multiple ****+ bouts and a huge climactic moment. 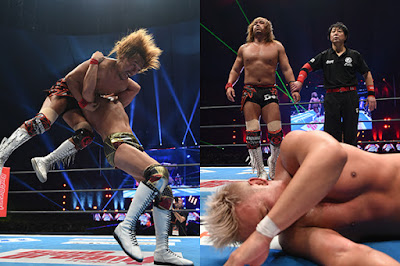 The main card kicked off with part 2 of Jushin Liger's retirement, as he teamed with Naoki Sano against Ryu Lee and brand new Jr. Heavyweight Champ Hiromu Takahashi.  This was fine, but nowhere near as fun as Liger's 8-man tag the night before, and at 12 minutes it felt longer than necessary.  I'd have liked a Liger-Takahashi singles match much better, but maybe the company didn't want to make Takahashi work back-to-back singles bouts.  After some decent back-and-forth, Taka pinned Liger with the Time Bomb finish.  The crowd was pretty dejected at Liger's loss, but it was the right move; Liger passed the torch to the new Jr. champion.  **1/4

Things ramped up quickly with the second match, for the Jr. Tag Titles, as Taiji Ishimori & El Phantasmo (both working as fantastic douchebag heels) faced Sho and Yoh.  The bad guys cheated like crazy and did a ton of unnecessary posturing to draw great heat, as RPG3K played the underdog babyfaces to the hilt.  Late in the match, during a ref distraction, ELP hit Sho with a low blow (a common move for ELP), only to find that Sho was wearing a cup.  RPG3K then hit a double-stomp/Shock Arrow tandem move on ELP to win the match and the belts.  This bout was super-fun and high-energy, and a great mix of athleticism and babyface vs. heel dynamics.  ***3/4 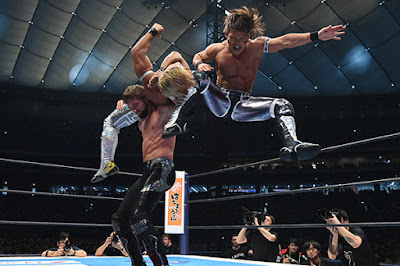 The most unusual bout of the night was Zack Sabre Jr. vs. Sanada for the British Heavyweight Title, a mat grappling showcase where Sanada went hold-for-hold with the technical wizard.  Zack as usual had some great counters, like catching Sanada's standing moonsault into an arm hold.  Late in the match Sanada snared the Skull End several times (Zack is perfectly built to be put in this hold) only for Zack to escape or counter.  Finally after a series of cradle near-falls, Zack caught Sanada in a European clutch to retain.  I was shocked Sanada didn't win here and I wonder what the plan is after this.  Fun little technical match.  ***1/2
The most disappointing Night Two match for me was Jon Moxley vs. Juice Robinson for the US Title, a good match that was far below their previous two efforts.  Juice attacked Moxley outside before the bell and they exchanged some chair-centric spots, culminating in a cannonball through the chair by Juice.  In the ring they went back and forth, trading punches and suplexes, and the finishing sequence saw Moxley counter a Pulp Friction into a pair of Death Rider DDTs to retain the belt.  Post-match Minoru Suzuki came out, got in Moxley's face and beat the crap out of him, locking in a sleeper and hitting the Gotch piledriver to lay him out.  This here is a feud I can't wait to see unfold; Mox and Suzuki will try to murder each other.  This match was fine but nowhere near as good as they're capable of.  ***1/4

The NEVER Openweight Title match between Kenta and Hirooki Goto took a while to really get going, but the second half was pretty great.  They did some basic brawling to start, and the intensity ratcheted up as the match wore on.  The real turning point for me was an insanely stiff slap fight that saw both guys hit jaw-rattling palm strikes.  How neither of them got knocked loopy I have no idea.  After some big traded moves, Goto hit his GTW and GTR to win back the NEVER Title.  This wasn't on the level of Goto-Ishii or Goto-Shibata but it was in the tradition of the great NEVER Openweight bouts.  Not too shabby at all.  ***3/4 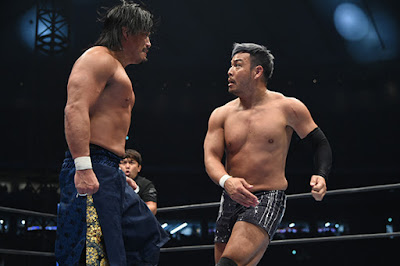 From here on out we were treated to a trio of excellent matches.

The two Night One losers, Kota Ibushi and Jay White, had a pretty fantastic, energetic match that cut such a ferocious pace early on I thought it was going under fifteen minutes.  White controlled the early minutes after brutally throwing Ibushi into the barricade multiple times.  Ibushi gutted it out and came back after going into "Deadeyes" mode.  Ibushi kept throwing stiff-as-fuck forearm shots that knocked White down, and goading White into hitting him back.  White hit a spectacular-looking top-rope uranage suplex for a nearfall, but Ibushi regained control after a V-Trigger and Boma ye.  White threw Ibushi into the referee and Gedo tried to interfere, but Ibushi no-sold everything Gedo did.  Ibushi looked to have it won after a Kamigoye, but Gedo pulled the referee out of the ring at the last second, White threw a chair at Ibushi's face, and Gedo hit him with brass knux.  Once the referee was back in the ring, White used every remaining ounce of energy to hit the Blade Runner for the screwjob win.  This match was pretty awesome even with all the shenanigans, and it protected Ibushi for an inevitable renewed push later in the year.  ****1/2 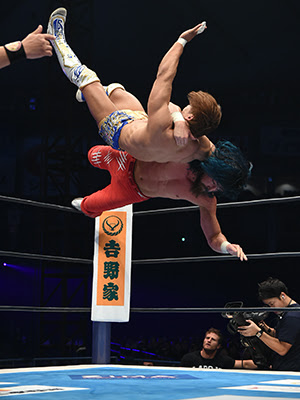 I absolutely LOVED the semi-main event, pitting AEW Champion (and he wore the belt too) Chris Jericho against Hiroshi Tanahashi, in a dream match of the aging rock star dudes.  This match saw both guys pull out all their big moves, counter finishers, and steal each other's stuff.  It was exactly the kind of classic-style wrestling match you'd want to see from these two, mostly contested in the ring but with some big spots on the floor, like a Hi-Fly Flow off the top to the floor and a brutal-looking Jericho DDT onto an announce table.  The climax saw a ton of big moves and nearfalls, and Tana hit a HFF onto a standing Jericho, who rolled through and slapped on the Walls of Jericho before converting it to a high-angle Lion Tamer, tapping Tanahashi after 22 minutes.  Just a fantastic match between two masters of psychology and storytelling.  The stip going into this was that if Tana won he'd be in line for an AEW Title match.  Since that didn't happen there obviously isn't a working relationship yet between the two companies, but Jericho and others have been chipping away in recent months to get them to work together.  Hopefully by this time next year we'll see the AEW Title defended in Japan and NJPW stars on Dynamite.  One can hope.  This was Jericho's second or third-best NJPW match.  ****1/2 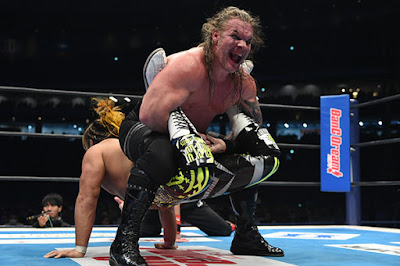 The climactic main event, for both the IWGP and Intercontinental Titles, capped off a six-year ordeal for Tetsuya Naito.  After his Title match with Okada was voted out of the WrestleKingdom 8 main event slot, Naito eventually became the no-fucks-given anti-hero we know today.  Four years later he got another chance at Okada in the Dome (this time in the main event), but came up short again.  Finally in 2020 Naito got to win the big match that had always eluded him, and what a main event it was.  These two threw everything at each other for over 35 minutes and had the crowd on the edge of their seat the whole time.  This was easily the best Okada-Naito match to date, full of drama and main event-level action.  The final minutes saw both men kick out of each other's finishers.  Okada hit a Rainmaker but Naito kicked out.  Okada hit two more Rainmakers but Naito countered the third with a Destino for two, then hit the Stardust Press for another nearfall.  They jockeyed for position and Naito finally hit another full-on Destino to win the match, both belts, and his first successful Tokyo Dome main event.  The crowd erupted as Naito celebrated with both titles.  Suddenly Kenta attacked him out of nowhere and posed by sitting cross-legged on Naito's chest.  Seems like an odd choice for a number-one contender given his NEVER Title loss earlier in the night, but the match should be good.  Anyway, this was another excellent main event that brilliantly capped off the two-night PPV.  Not on the level of the two classics the night before, but still great.  ****3/4 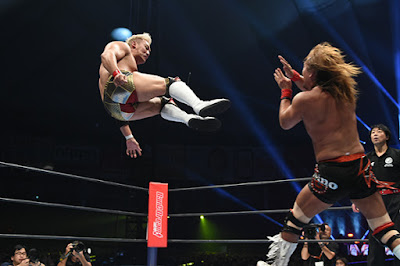 Night Two was overall on par with Night One, more consistently good but missing a true MOTY candidate.  Still, this WrestleKingdom taken as a whole was epic, eventful, and loaded with great stuff.  On balance I think I prefer one stacked night of WrestleKingdom, but the Double Champion Dash provided a good reason to split it in two.  It'll be interesting to see if they come up with an organic reason to do this again, or if they go back to a traditional lineup.  The winter/spring schedule will feature some new pairings and it will be fun to see how they play out.  With the G1 tournament moved to October (thanks to the Olympics) I wonder if King of Pro Wrestling and Destruction get moved up to fill the gap.  Regardless, the big takeaway is, it's Naito's time to shine, but Okada is still the company MVP.


Best Match: Kazuchika Okada vs. Tetsuya Naito
Worst Match: Liger/Sano vs. Takahashi/Lee
What I'd Change: Make Liger-Takahashi a singles match and have Moxley-Juice be a bit more spirited.  I'd probably also save the Kenta run-in for the next night so everyone could go home happy.
Most Disappointing Match: Moxley vs. Juice
Most Pleasant Surprise: I wasn't sure how good Jericho vs. Tanahashi would be, but it was great.
Overall Rating: 9.5/10
Two-Night Rating: 9.5/10