Holy jeez is AEW Grand Slam 2022 a loaded card.  The Dynamite portion is original Clash of the Champions-caliber, while the Rampage lineup has a whopping eight shorter matches.  Hopefully AEW continues their string of big ratings to continue proving they can get along just fine without CM Punk and also to show Discovery that they're underpaid. 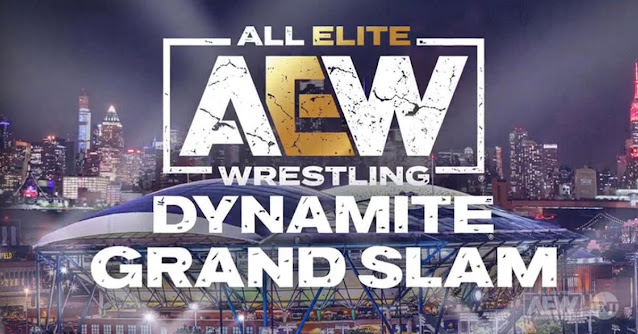 This Punk-Elite situation has certainly motivated AEW to create some must-see television, what with the tournament for the vacant AEW Championship and the featuring of more stars that were perhaps underutilized.  The next few months leading into Full Gear should be intriguing to say the least.
Let's look at the lineups....
Dynamite
AEW All-Atlantic Championship: Pac vs. Orange Cassidy 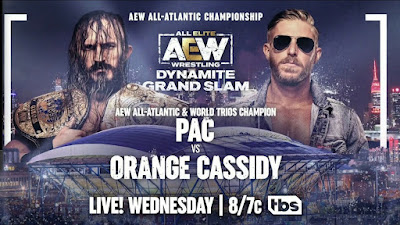 These two had a fantastic match in 2020 and I expect the same here.  Pac is the no-bullshit tough guy while Cassidy is the aloof slacker who likes to poke the bear.  I don't anticipate a title change here, but Cassidy will give Pac a good fight.
Pick: Pac retains
Ring of Honor Championship: Claudio Castagnoli vs. Chris Jericho 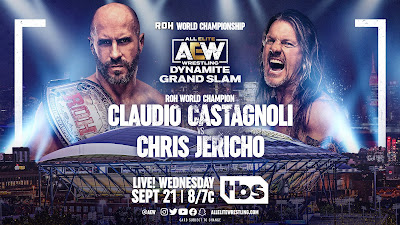 This should be spectacular, and it's yet another match WWE never capitalized on.  Considering they're giving a huge star like Jericho a crack at the ROH Title, hopefully that means an ROH TV deal is imminent.  It would make sense then to put the title on the biggest possible star to give that brand a boost.  Claudio just won the title two months ago but if the idea is to get an unprecedented number of eyes on Ring of Honor, it makes sense for Jericho to capture it.  Regardless I'm very much looking forward to this one.
Pick: Jericho wins his first ROH Title
AEW Tag Team Championship: Swerve in Our Glory vs. The Acclaimed 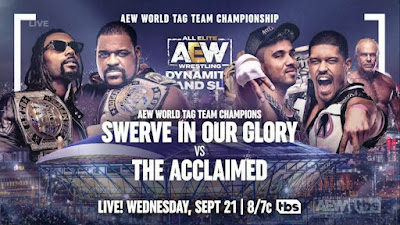 This match nearly stole the show at All Out and served as a milestone in The Acclaimed becoming breakout homegrown stars.  The Chicago crowd wanted so badly for Max and Anthony to win the straps, but alas they'd have to wait until their second try.  And on The Acclaimed's home turf, they'll do just that.  The pop alone for Castor and Bowens' title win will make this one quite memorable.  And the match should be excellent too.
Pick: The Acclaimed pick up their first AEW title
AEW Interim Women's Championship: Toni Storm vs. Britt Baker vs. Athena vs. Serena Deeb 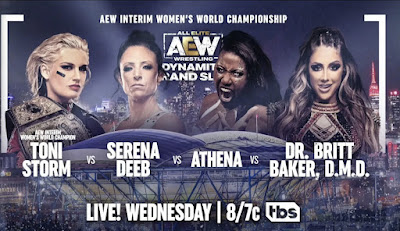 Lots of accomplished women in this one.  I liked the 4-way at All Out quite well and with Deeb and Athena in the mix this one could eclipse that.  Plus Jamie Hayter will undoubtedly figure into the match somehow; I imagine this will mark her long-awaited babyface turn and kickstart the Baker-Hayter feud.  Toni just won this title at All Out so she ain't dropping it yet.
Pick: Storm retains
AEW World Championship: Jon Moxley vs. Bryan Danielson 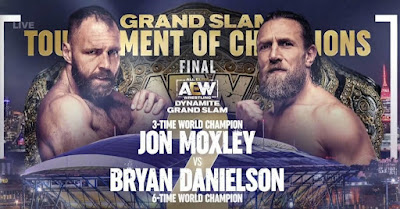 THIS ONE'S FOR ALL THE CHIPS!  It's the two founders of the Blackpool Combat Club, locked in....well, combat.  The way they've built an eventual Moxley-MJF showdown it looks like the plan is for Moxley to win the title once again.  And considering how great he's been in 2022 I wouldn't be mad.  At the same time though, this is a chance to give Bryan Danielson a well-deserved title run, and coincidentally CM Punk's absence would pave the way for Danielson to benefit, for the third time.  It would also be poetic since Danielson made his AEW in-ring debut at last year's Grand Slam.  And a Full Gear main event of Danielson vs. MJF would be tremendous.
Pick: It's a pick 'em, but I'm gonna go with one of my all-time favorite wrestlers to capture his first AEW Championship.  Bryan Danielson wins.
Rampage
Hook & Action Bronson vs. 2.0 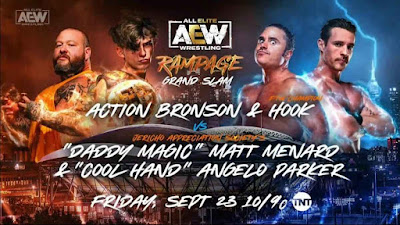 Welp, this one's odd.  I'd never heard of Bronson prior to this, hopefully he's a big enough star to bring more eyes to Rampage.  This one won't go long but hopefully Hook will get some direction as a result of the match - dude needs a feud.
Pick: Hook & Bronson
Powerhouse Hobbs vs. Ricky Starks
This was the most disappointing match at All Out, but these two have a chance to give us a proper showdown here.  Since Hobbs won really decisively in the first go-round I think Starks evens the score in this one.  If given time this should be a Rampage highlight.
Pick: Starks
Wardlow & Samoa Joe vs. Josh Woods & Tony Nese
Speaking of guys who need a feud, Wardlow desperately needs some direction.  He's the dominant babyface midcard champion who disposes quickly of every challenger, but that can only go so far.  We need a reason to care about him again, beyond "He's a badass."  Every time he wrestles I hold out hope for a post-match angle to set up a new rivalry.  We'll see if that happens here.  Hell, a feud vs. Joe would be quite something.
Pick: Wardlow & Joe
Eddie Kingston vs. Sammy Guevara 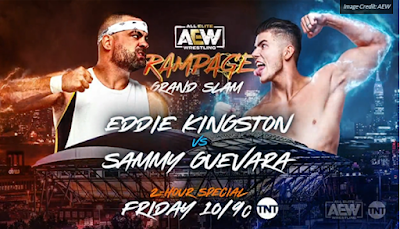 This was originally to take place at All Out but a real-life backstage blowup prevented that.  Cooler heads have prevailed though, and here we are.  Sammy recently posted some cryptic tweets making it sound like he's leaving the company, which is odd.  Maybe he's just taking time off?  I dunno.  Either way I'm guessing Eddie wins this.
Pick: Kingston
Sting & Darby Allin vs. House of Black 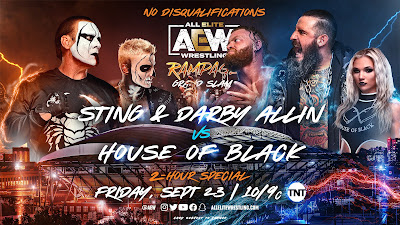 Speaking of hiatuses, Malakai Black is unfortunately taking time away from wrestling for a while.  It's been speculated that he may have gotten a conditional release from the company to prevent him from going to WWE.  I hope one of the conditions guarantees AEW the right of first refusal when Black is ready to return.  Anyway, that leaves House of Black without a leader.  I wonder if Miro will step into that role, since at All Out Miro seemed reluctant to cooperate with Sting and Darby.  It would give Miro some much-needed direction and set up Miro vs. Darby as a high-profile singles feud.  Sting is still undefeated in AEW and I expect that to continue here.
Pick: Darby & Sting
TBS Championship: Jade Cargill vs. Diamante 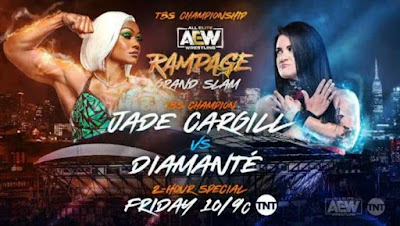 Who will be the first to defeat Cargill?  It will not be Diamante, that's for sure.  This will be short as usual.
Pick: Jade retains
Rey Fenix vs. Jungle Boy 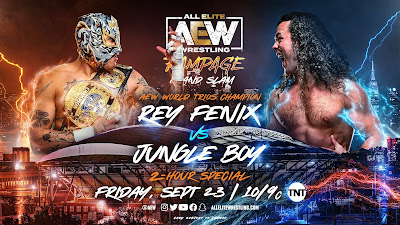 This one ought to steal the show on Rampage.  Not sure why this was set up since they're both babyfaces, but the action should be spectacular.  Will Luchasaurus get involved?  Will Fenix be protected as a Trios Champion?
Pick: I guess JB probably wins but it could be via DQ if Luchasaurus shows up
Golden Ticket Battle Royale 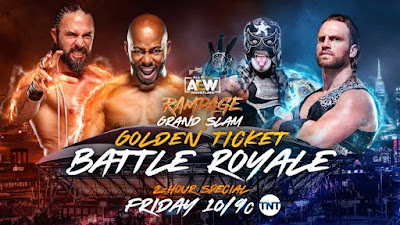 Only a few names announced for this one, but the winner gets a future title shot.  I suppose if Daniel Garcia's in it and Bryan Danielson wins the AEW Title, Garcia could get the duke to set up their rubber match.  Hangman Page is one of the names and as a former champion has to be the favorite at this point.  But I'll reserve the right to update this pick as more names are announced.
Pick: Page
This is a big week for AEW, hopefully they score big ratings wins on both nights.  At any rate, the Wednesday show should be one of their best ever, while Friday will be a smorgasbord of fun.
Thanks for reading - subscribe to our mailing list, and follow us on Twitter, MeWe, Facebook and YouTube!
Posted by Justin Enuffa Ballard at 10:31 AM