Welcome to another edition of Top Ten Things here at Enuffa.com, where I count down the ten best or worst of whatever's on my mind.  Today it's the mighty Samoa Joe, and his fantastic career. 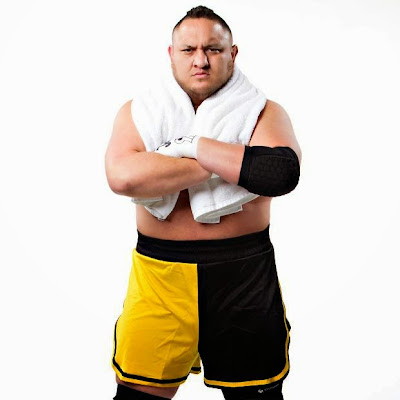 I first became aware of Joe in 2003 when I attended a live ROH event, and upon hearing his name thought he'd be some kind of lame cartoon character.  When he appeared from behind the curtain I still wasn't convinced, based on his unconventional physique.  And then I saw him wrestle.  Folks, from 2003-2009 Samoa Joe was as good as anyone in the entire world at professional wrestling.  Unfortunately by '09 TNA had already spent about three years either underutilizing or completely wasting Joe's immense skillset, and he became rather unmotivated as a result, failing to build on his already stellar body of work.

Joe's NXT run from 2015-2017 was quite dominant and included two NXT Title reigns (I got to witness his first championship win over Finn Balor in person), and he eventually made it to the main roster for a while, where he had noteworthy scuffles with Brock Lesnar, Roman Reigns and Braun Strowman, as well as a lengthy feud with old rival AJ Styles.  An injury sidelined him for over a year and he spent some time as a color commentator before being released and re-hired to NXT, becoming the brand's first three-time champion.
Anyway, here's a look at Joe's pre-WWE classics..... 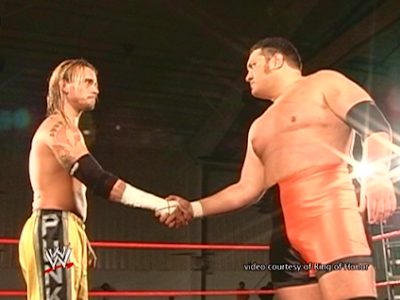 Largely credited with putting both Punk and Joe on the Indy wrestling map, the second match of their much-heralded trilogy is widely considered to be the best.  Punk and Joe went a full hour for the second time, wrestling to a draw, in a match that pulled out all the stops and earned the elusive "five-star" rating from the Wrestling Observer.  I don't love it as much as others do, but it is quite an accomplishment from two of the best workers of the past two decades. 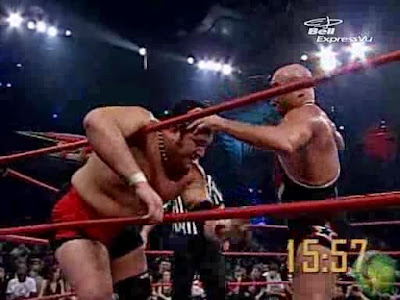 Joe and Angle fought several times on TNA PPV, and this was the third in an early trilogy that began with Angle's TNA debut.  TNA rather squandered the hugeness of the Joe-Angle feud, hotshotting this match immediately upon Angle's arrival.  However the matches speak for themselves, and their first encounter still stands as TNA's biggest PPV buyrate.  Anyway, the Final Resolution match was 30-minute Iron Man match full of drama and gutsy action.  It was evenly contested until the 25-minute mark when Angle pulled ahead 3-2, and Joe just barely failed to tie it up. 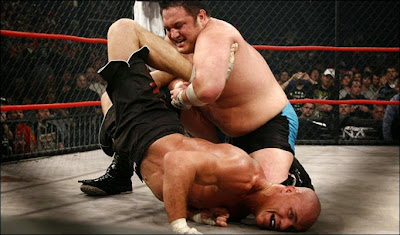 Angle had gotten the better of Joe more often than not in their long rivalry, but in April 2008 Joe finally got a World Title match with Angle inside a cage.  This match is an acquired taste, as the MMA/wrestling hybrid caught a lot of people off-guard.  I wasn't that impressed on the first viewing, but on the second I understood what they were going for and grew to really enjoy this unusual match.  After three years on the roster Joe finally captured the elusive TNA Championship. 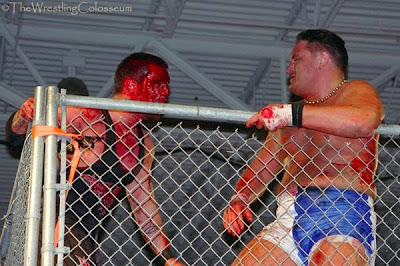 This cage match took place in the thick of Joe's 21-month ROH Title reign.  A very young Jay Briscoe took one of the most brutal beatings I've ever seen, blading early in the match and spilling buckets of blood (Seriously, this is one of the most disgustingly bloody matches I've ever seen) before finally succumbing to Joe's overwhelming offense. 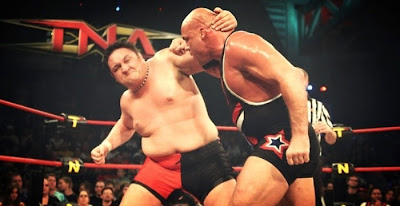 I probably sound like a broken record, but Joe vs. Angle was easily the greatest feud in TNA history, and this was their best match together.  Angle won their shockingly brief first encounter at Genesis a month earlier, but now it was time for Joe to even the score.  After 19 minutes of spectacular back-and-forth chain wrestling and submissions, Joe finally made Angle tap out to the Coquina Clutch, capping off one of the best matches of 2006. 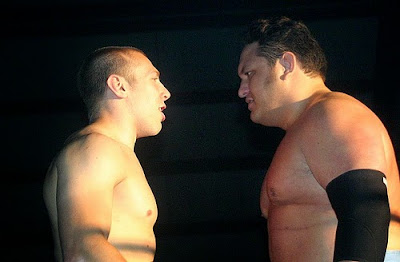 Man I can't wait to see this match again in 2018.  In August 2006 Bryan Danielson was enjoying an ROH Title run on par with Joe's.  The two of them would collide in an epic bout that lasted a full sixty minutes.  Danielson played the cocky-but-cowardly heel Champion to perfection, in a performance rivaling 1980s Ric Flair.  This was the first Danielson match I ever saw, and I was immediately hooked.  Joe spent the early portions of the match chasing Bryan around before finally dominating him for much of the encounter.  Joe would come up just short of regaining the belt, but the live crowd ate this up, chanting "Five More Minutes" at the end.  Quite possibly my favorite 60-minute draw. 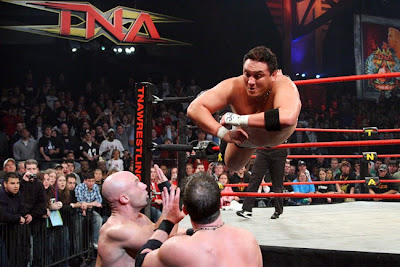 Styles, Daniels and Joe.  These were the three men on whose backs TNA was built.  While the main event scene mostly consisted of former WWE and WCW talent, these three men were blowing the rest of the card out of the water in the X-Division.  This three-way match was the first and only TNA bout to earn a five-star rating from the Wrestling Observer, and it's not hard to see why (I believe this was also the first time an X-Division match headlined a PPV).  Where most Triple Threat matches tend to devolve into "one guy rests while the other two fight," these three ring generals interwove their dazzling offense seamlessly, stringing together nearly 23 minutes of breathtaking action, as if to say "We all know THIS is the reason people watch TNA!" 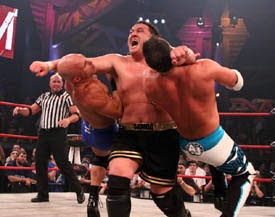 Four years later Styles, Joe and Daniels did it all again, this time for the TNA World Title, and I'll be goddamned if this match didn't at least equal if not one-up its groundbreaking predecessor.  Late 2009 marked the last time the TNA product really felt like it was on-track (the arrival of Hulk Hogan and Eric Bischoff in January 2010 sent TNA into a downward spiral), and this main event was the perfect illustration of the company's renewed (if shortlived) focus on its top homegrown talent.  The combatants utilized four extra years of experience to temper the action with subtle storytelling techniques, creating a spectacular companion piece to their first encounter.  Along with the Unbreakable match, this is one of the best Triple Threats I've ever seen. 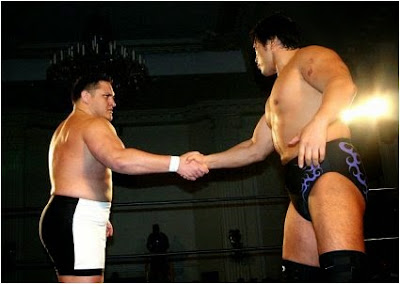 If Joe vs. Angle was the benchmark feud for TNA, Joe vs. Kobashi is what helped Ring of Honor turn the corner in 2005.  Prior to this match ROH had been struggling to become profitable - ticket and DVD sales had stagnated, casting some doubt on the company's future.  But it was Samoa Joe vs. Japanese legend Kenta Kobashi that significantly boosted DVD sales and created a massive buzz around ROH's product.  Be clear - there's nothing glamorous about this match.  It's just two brutes pummeling the bejeezus out of each other for 25 minutes.  Going into this (and not being familiar with Japanese wrestling at the time), I knew nothing about Kobashi, not even what he looked like.  Based on the widespread five-star ratings this bout received, I assumed he was a high-flier who specialized in crazy highspots.  When I popped in the DVD and saw that he was Joe's size I thought "How could a slugfest be a five-star match?"  The answer is of course, "because Joe and Kobashi beat the ever-lovin' shit out of each other for our enjoyment."  The match is all about Joe's submission chain wrestling, Kobashi's devastating suplexes, Joe's lethal kicks, and of course, Kobashi's machine-gun chops (seriously, look at the welts all over Joe's chest by the end).  In other words, Joe vs. Kobashi is a masterpiece of Strong Style. 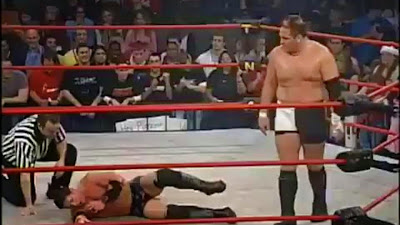 There have been more action-packed matches, more brutal brawls, more epic contests.  But in December 2005 Samoa Joe and AJ Styles told a story between the ropes that has seldom been equaled before or since.  Joe arrived in TNA that summer and was immediately pushed as an unstoppable monster, who had his way with basically everyone in the X-Division.  AJ was the superbly skilled conquering hero; the last line of defense against Joe's reign of terror.  The pace started out methodical but escalated continously throughout the match.  Joe dominated AJ with his brutal moveset, but the defiant Styles refused to back down, eventually kicking out of Joe's pin attempts at the one-count just to stick it to the villain.  Blood pouring out of his mouth, Styles managed to lift the 280-pounder up for the Styles Clash, and despite diminished height the move still looked absolutely vicious.  Joe kicked out however, and finished AJ with the rear naked choke, capping off one of the best examples of pure in-ring storytelling I've ever seen.  The buildup and the two characters were so key in making this match truly work, and it's a great reminder how important the intangibles are in wrestling.  The action itself is simply the vehicle through which story and characters are conveyed, and when done correctly it's unlike any other form of entertainment in this world.


And there's my pick for Joe's top ten.  If there are any Joe classics I've missed, lemme know in the Comments section below!  Join us on Facebook, MeWe and Twitter....