Welcome to another edition of Awesomely Shitty Movies here at Enuffa.com, where I take a closer look at either a flawed old favorite, a lofty disappointment, or a cult flop.  Today's subject is the latter.  It's the 1995 box office bomb Empire Records, a film that was little more than a thin excuse to sell a soundtrack album, but with a surprisingly accomplished cast and a heart that's actually in the right place. 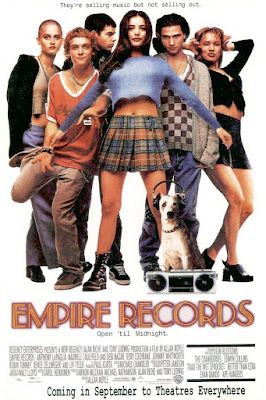 Empire Records is yet another 90s slacker comedy that takes place in one day, centered around a group of teens working in a music store.  The assistant manager learns at the outset that the store's owner is getting ready to sell this Delaware fixture to a retail chain, and takes drastic measures to try and prevent this tragedy.  The rest of the story sort of hinges on this moment, but each character has his or her own personal arc, and for a critical and commercial bomb the screenwriters juggled all these threads somewhat admirably.  But yeah, this movie absolutely TANKED at the box office and didn't gain any real recognition until its home video release, where it became a cult favorite.

Side note, Regency Enterprises executive Michael Nathanson greenlit this film, and was approached two days later with the script for a little movie called Clueless, which he promptly turned down because he was already making a teen movie.  Clueless of course went on to make a huge profit for Paramount.  Goddamn, that's gotta sting.

So let's settle into this record store groove and separate the hit songs from the stinkers....

For a teen comedy that flopped with both audiences and critics, this movie has a helluva lot of acting talent and future-star power.  Two-time Oscar winner Renee Zellweger, Liv Tyler, Anthony LaPaglia, Debi Mazar, Robin Tunney, Maxwell Caulfield, and a few future character actors in Ethan Randall, Rory Cochrane, Johnny Whitworth and Brendan Sexton.  That's a pretty deep cast, and their respective characters supply many of the film's charms.  Pretty much every character is likable/relatable in some way.  Joe is the reluctant father-figure who'd do anything for his staff, Corey is the anxious overachiever, Gina is the loose girl with a heart of gold, AJ is the likable art student who's heartsick for Corey, Lucas is the lovable scamp who wants to save the store from becoming a stuffy corporate retailer.  This cast and their performances elevate the trite script above its station.

90s nostalgia is big these days, and Empire Records has a ton of it.  Thus for us sad old adults, watching it now is like being transported back to those carefree college days of short skirts, Doc Martens, mom jeans, flannel shirts, front-curtained men's hairstyles (think 90s Johnny Depp), and post-grunge alternative.  Which brings us to the soundtrack, really the driving force of the film.  Empire Records was reviewed at the time as "a soundtrack in search of a movie," and I can't really argue much.  This movie feels like it was made just to sell records, thus the CD is loaded with transitory 90s artists like Gin Blossoms, Edwyn Collins, The Cranberries, Toad the Wet Sprocket, and Better Than Ezra, while the film also includes Sponge, Dishwalla, Ass Ponys, etc.  Empire Records is exploding with 90s pop culture and it's hard now not to get swept up in all of it, particularly as someone who lived through that era.

Empire Records isn't by any means a lofty, high-brow comedy, but it does have plenty of light laughs and quotable material.  Corey's "I'M BRINGING REX HIS LUNCH!"  The old woman in line singing "Say No More Mon Amour" to Rex.  AJ's "I don't feel that I need to explain my art to you, Warren."  It's an easy movie to watch because the characters have easy comedic chemistry together.  This cast must've spent a fair amount of time getting to know each other, as they feel like a real group of longtime co-workers.  So it's fun to just watch them interact and feel like you're there with them.  For me that aspect earns points even when the script isn't that good.

So yeah, Empire is a guilty pleasure that's easy to pop on and watch over a couple beers.  But it falls very short of being a truly good movie and here are a few reasons why....

Pretty much every thread in this movie gets resolved in a conventional, teen comedy kinda way.  AJ and Corey get together, Joe gets to keep the store, Gina finally sings in front of people, Jane quits working for Rex, Warren gets a job at the store, Lucas suffers no consequences for his flagrant insubordination and probably illegal gambling activity, Mitch has a change of heart, Debra has a new lease on life.  Everything is awesome.  Considering how much potentially heavy stuff happens to these characters this film could've been much more substantial and dramatic.  Diet pill addiction, suicide attempt, gambling, workplace sex, hell, this is like a season of Degrassi High.  But everything's wrapped up in a neat little package at the end, instead of in a way that challenges the audience.  Apparently multiple characters and 40 minutes were removed in post-production, so perhaps the original cut was a bit more complex and believable.  I ask this all the time, but has studio meddling ever resulted in a better movie?

Cashing in on the Slackers

The 90s were the era of the slacker comedy.  Clerks, Dazed & Confused, Mallrats, Wayne's World, Bill & Ted, and of course Slacker, all featured lovable lazy characters just trying to find themselves and/or love amid a sea of hip pop culture references and cutting-edge soundtracks.  Empire Records is one of the late arrivals to this genre and many of its elements feel recycled from superior films.  Like Clerks, everything takes place in one day, in a store.  Like Mallrats, ridiculously unrealistic events happen to these characters.  Like Dazed & Confused there's sometimes weed involved.  Like Wayne's World and the second Bill & Ted, the film culminates in a live music performance.  It's a tad paint-by-numbers, this movie.

The 90s were rife with movies seemingly designed just to sell soundtrack albums, and Empire definitely fits into that category.  But this particular soundtrack only contains 16 of the roughly 50 featured in the movie, and there are a ton of classic tunes left off the album for some reason.  How do you not release a double-album version of the soundtrack?  Maybe the movie didn't make enough money for them to pay all the royalty fees?  I know this isn't about the movie so much, but since the soundtrack was clearly a key piece (maybe THE key piece) of the marketing I thought I'd bring it up. 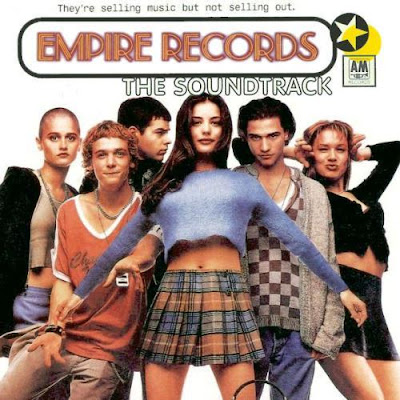 This film is sadly full of major plot contrivances so the various threads can reach a satisfying, uplifting conclusion.  Lucas finds out the store is being sold to a chain and steals the day's receipts, hoping to quadruple it in Atlantic City.  After betting it all on a roulette spin and actually winning, he just lets it ride rather than taking that $18,000 and carefully trying to double it throughout the night.  Joe finds out and protects Lucas from repercussions, even going so far as to commit bank fraud by filling the deposit bag with scraps of paper to trick Mitch.  Mitch decides at the end to sell the store to Joe after they raise a buncha money, except he's making out way worse than if he just sold to the chain.  There's a lotta people doing a lot of really illogical things in this movie, just so the ending can be happy for everyone.

-Again, are we seriously being asked to believe Mitch would sell the store to Joe at a steal, simply out of convenience because the staff quit, when he had a big money deal from Music Town on the table?  This is one of the most absurd plot resolutions I've perhaps ever seen committed to film, and I watch Marx Brothers films, for Chrissake!


-Umm, yeah there is nooooooo way Warren doesn't get sent to juvi at best, after attacking the store with a gun, blanks or not.  That's still assault with a deadly weapon, you can still kill a person with a blank.  He's goin' away.  Get real.  Nope, Joe GIVES HIM A JOB AT THE STORE.  What??

-That store does not have a license to sell beer, how does their little fundraiser soiree not get shut down by the fuzz?

-At the end AJ reveals his intention to go to art school in Boston so he can be near Corey when she attends Harvard.  Did he just decide this today?  Don't you have to apply months in advance and actually be accepted?  I didn't go to art school, but I assume their admissions process is similar to other colleges.  What time of year does this movie take place?  Does AJ still have time to make this happen?  I NEED TO KNOW WHAT HAPPENS TO THESE CRAZY KIDS!!!

I was introduced to Empire Records in college, while living in my first apartment.  I was 20 years old, the world was my oyster, it was the carefree mid-90s, things were simple.  Watching this film now transports me back to that time and makes me want to pay it a visit for a little while.  "Day in the life" films tend to succeed in that regard anyway; you just get caught up in the day-to-day social interactions with the characters and it's like you're there.  The aforementioned Clerks had this quality in spades (and is admittedly a far superior film), and Empire Records rides that coattail.  I feel 20 again when I watch it.  Maybe that's why I still enjoy it so much in spite of its hackneyed writing.  But it's got a pretty great little cast with loads of believable chemistry, some 90s one-hit-wonder tunes, light comedic misadventures, and of course Rex Manning.  How can I say no?

Posted by Justin Enuffa Ballard at 8:40 AM