I hope you've enjoyed our look back at SummerSlam's 30+ year history, because now it's time to predict this year's edition.  And it looks......kinda boring. 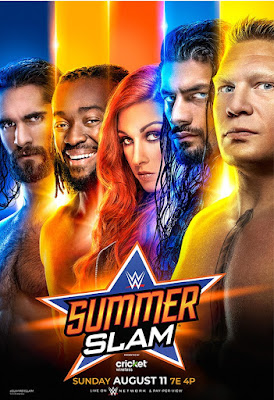 Thanks to Vince McMahon's gnat-like attention span, this year's lineup comes off as one of the most disorganized in recent memory, if not ever.  There are some good on-paper matchups, but most of the rumored bouts I was excited for either got tossed off on free television the past two weeks, or in the case of Roman Reigns vs. Daniel Bryan, Vince couldn't figure out how to get from Point A to B to C, in time for the third-biggest show of the year.  I'd like to repeat that.  Vince McMahon, who's been doing this job since 1983, couldn't move a feud between two of the company's biggest stars along fast enough to get the resulting match on his third-biggest PPV.  For one thing, this "career-altering announcement" Daniel Bryan teased three weeks ago simply got thrown out.  No payoff at all.  Because apparently no one watches these stupid shows week to week.  Attention religious WWE viewers: Vince McMahon thinks you're stupid.  Always has.  So Vince decided to nix that whole angle and instead positioned Bryan as the guy who's been mysteriously attacking Roman backstage, but waited so long that he only had 12 days to put the match together in time.  Still this could've happened, had he written the reveal to be on this week's RAW.  But no, he instead saved the Erick Rowan reveal for the last five minutes of the go-home Smackdown, so Bryan still hasn't even been established as the guy behind it all.  Fuck's sake.

Aside from Roman-Bryan, we're also not getting Nakamura-Ali (they booked Ali to beat Nak in a non-title match and then had him lose to someone else a week later, so the I-C Champ now has no feud), Aleister Black vs. Sami Zayn (given away for free), the RAW Tag Title match (Anderson & Gallows won it on RAW), the Women's Tag Title match (gave it away on RAW and had the wrong fucking team win - Asuka and Kairi need to get out of WWE, pronto).

But don't worry, this lineup is chock full of part-timers and old-timers.  Brock, Orton, Shane, Trish, and for fuck's sake, Goldberg, the guy whose match with the Undertaker is sure to win Worst Match of the Year honors.  No wonder young people don't watch this shit anymore, the two big title matches involve OVW Class of 2002 stars, Shane and Goldberg are 50, and Trish, god love her, hasn't been relevant since the Dubya administration.  You couldn't find room for Reigns, Bryan, Nakamura, Joe, Rey, Andrade, Black or Zayn on a SummerSlam card??  This is like the SummerSlams from 10-12 years ago where they just left off half the big stars for no reason. 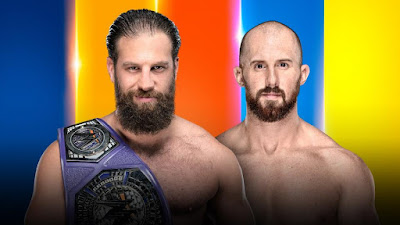 Oh good, they found room on the show for 205 Live.  Look, I'm not pickin' on the cruiserweights, they're all very talented and their matches are basically always good.  But 205's viewership is simply not strong enough to justify this title getting represented on every PPV (or pre-show) when the Intercontinental and every set of Tag belts can't even make it on.  Seriously, why did they bother creating a Women's Tag Title and then do absolutely nothing with it?  Fuck.  Anyway, this'll be fine and will probably happen on the pre-show.  Gulak just won the belt last month, so he'll keep it. 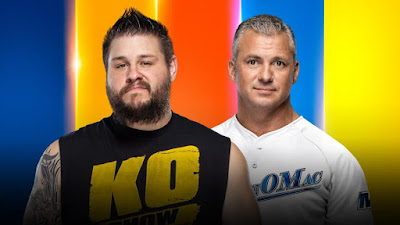 Fucking Shane McMahon has been on every goddamn PPV this year except Stomping Grounds.  That's 8 out of 9.  Know when Asuka's last main show PPV appearance was?  Fucking Fastlane, five months ago.  Fuck this company.  Yet another Shane match I couldn't care less about.  Owens was made to look like a total idiot this week, when he asked why only his career is on the line and Shane's isn't, to which Shane replied, "Because I'm smart and I didn't wager my career on this match."  Yeah.  He's right.  Kevin's a dolt.  Awesome.  I love rooting for stupid good guys.  I want to be in the writers' room when they come up with this shit so I can smack them in the face with a ping pong paddle every time they present a stupid idea.  I'd have to bring several spares.

Pick: Obviously Owens isn't retiring, so he has to win. 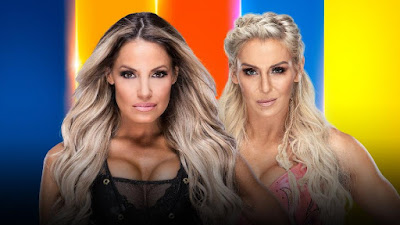 Look, Trish is one of the greatest women's wrestlers of all time.  She helped pave the way for the stacked-on-paper WWE women's division of today (Imagine if this company knew what to do with any of 'em).  But she retired in 2006 and aside from a few one-off matches she hasn't wrestled since.  Why are we putting Charlotte against a retiree from over a decade ago instead of building up someone current for her to fight?  If you watch any WCW-related documentary on the WWE Network you'll learn all about how stupid they were to not build up new stars and rely on names from the past.  So why is WWE STILL DOING THE SAME?  This should be okay but can anyone honestly say they'd rather see this match than say, Charlotte vs. Asuka or Sane or a returning Sasha?  When does the nostalgia well finally run dry?

Pick: Charlotte wins so she can call herself the GOAT. 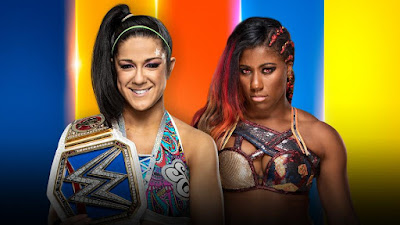 Okay, this is actually something fresh.  I'm glad Ember is finally getting something meaningful to do.  Hopefully they get time.  It's too soon to take the belt off Bayley, so I think she retains in a hard-fought match.  Hey, look at that, I made a pick without saying anything negative. 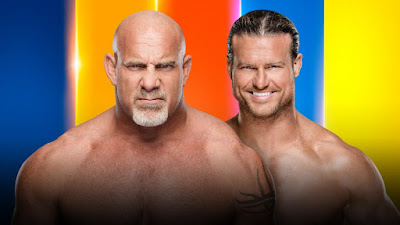 I can't believe that in 2019 anyone still gives a tupenny fuck about seeing Goldberg do a 30-second squash.  Seriously, if you wanna see that, go back to any Nitro from 1998, you'll see him do it way better than he can now.  Why are we still recycling this nonsense?  One-dimensional wrecking machine who peaked last century kills current WWE guy in under a minute.  Someone's grumpy dad tells a "pretty boy whipper-snapper" to get off his lawn, and then murders him.  I say again, no wonder kids don't watch WWE anymore.

Pick: Goldberg.  Piss off with this. 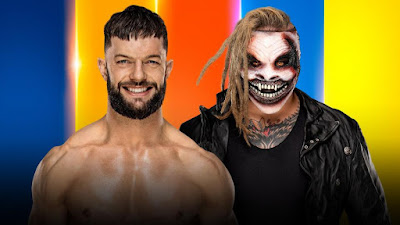 This is another match that could actually be good, although I imagine it won't get much time since it's Wyatt's new Fiend character and they'll want to put him over big.  Balor is taking a couple months off so he doesn't further damage his credibility by being featured on television every week.  Gotta love how this SummerSlam has a Balor-Wyatt match, an AJ Styles US Title match, and a Brock Lesnar Universal Title match, just like the show did two years ago.  Anyway, Wyatt wins here; hopefully in a couple months we'll see Fiend vs. Demon.


US Championship: AJ Styles vs. Ricochet 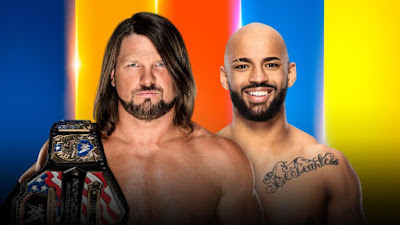 These guys had an apparently disappointing match last month (I haven't brought myself to watch either of the last two PPVs yet), but hopefully the "producers" will get the fuck out of their way this time so we can see something good.  AJ and the OC guys are one of the stronger acts right now (I still can't believe Anderson & Gallows stuck around), so I think he'll retain here. 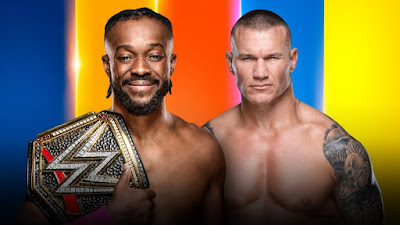 Oh good, a rematch from ten years ago.  I'm not sure I ever need to see Randy wrestle ever again.  He's all done evolving as a performer and the last time he was in a WWE Title program it was the drizzling shits.  He hasn't been motivated to be great in a very long time.  Kofi's title reign thus far has been fraught with pretty tired challengers unfortunately.  Still not sure why Daniel Bryan's only rematch was on free television.  Anyway, this could be fine, it could be a snore.  Randy Bore-ton's involved after all. 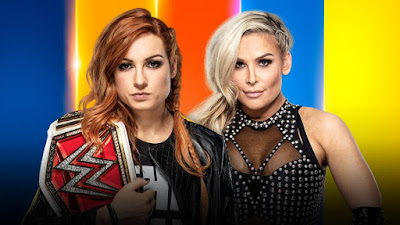 I'm glad they made this a submission match, as it adds an interesting layer and should make the match stand out from the others.  That's a good thing on a card with nothing but singles matches.  Both Kofi and Becky have gone from white-hot at WrestleMania time to "just another champion" thanks to bad booking and weak challengers.  Interesting that Baron Corbin and Lacey Evans, the two people Vince was hell-bent on shoving up everyone's ass for four months, are nowhere to be seen on television now.  Not that I'm complaining.  This could be one of the better matches of the night, but I hope Sasha attacks Becky after the match and gives her a hot feud for a change. 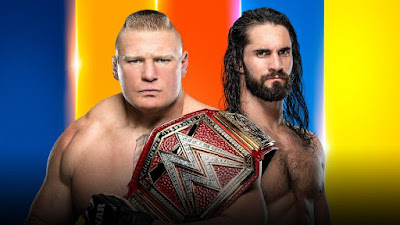 Holy fuck did they ruin Seth.  What should have been The Year of Seth Rollins turned into "Seth feuds with Baron forever and becomes the only Universal Champion whose PPV main event sold 4500 tickets, then Seth gets repeatedly murdered by Brock Lesnar and loses the belt."  The only satisfying way Seth could redeem himself after being booked this way in this feud is to win back the title decisively, but I don't think that's the plan.  I think Seth just got chewed up and spit out and Vince is moving onto someone else.  Seth must be pissed after blindly defending his employer on Twitter for weeks only for this to be his reward.

Pick: Brock retains so he can hold the belt forever, again.