Welcome to yet another Awesomely Shitty Movies, where I, your faithful Enuffa.com editor, examine an old classic cinema turd and analyze its pros and cons. 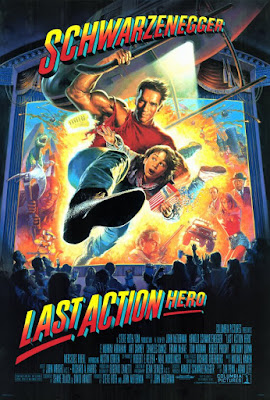 Today it's the 1993 Arnold Schwarzenegger flop, Last Action Hero!  Directed by John McTiernan (of Die Hard and Predator fame) and released just a week after the mega-blockbuster Jurassic Park, LAH didn't stand a chance at the box office and it predictably died a quick death.  Last Action Hero tells the story of Danny Madigan, a 12-year-old boy obsessed with Schwarzenegger movies, specifically his fictitious Jack Slater series.  Danny frequently cuts school to visit a nearby run-down theater, owned by his elderly friend Nick.  One night Nick invites Danny to a private midnight screening of Jack Slater IV, and gives him an old-timey movie ticket which was supposedly a gift from Harry Houdini.  Unbeknownst to both of them, the ticket has magical properties, and upon being torn in half, it opens a portal between the real world and the one on the screen.  Danny unwittingly winds up inside the film and becomes Jack Slater's sidekick, and eventually both of them pursue the film's main villain Mr. Benedict back to the real world to save the real Arnold Schwarzenegger.

This is an unabashedly silly premise that had already been much more skillfully explored in Woody Allen's The Purple Rose of Cairo, where Mia Farrow's character goes to see a film so many times one of the characters begins interacting with her and escapes the confines of the screen.  You won't find Purple Rose in an ASM column, as there isn't anything shitty about it - it's a very smart, well-made film.  Still, despite being a dumbed down echo of Purple Rose, Last Action Hero is not without its charm; it has some entertaining action scenes sprinkled with satire, plus some fun comedy elements.  But yeah, there's a lot wrong with it too.

Going into this movie I was pleasantly surprised by how much the filmmakers satirized the concept of the summer blockbuster.  Last Action Hero pokes fun at the action movie genre at almost every turn (not unlike the way Scream picks apart horror films - RIP Wes Craven), which for a movie nerd like me made for quite a lark.  Arnold seems right at home dissecting the very type of film that made him an international megastar, and it's refreshing to see a mainstream commercial movie actor not take himself too seriously.  Inside the Jack Slater movie Danny is able to consistently predict what's about to happen because everything in the movie is an action film cliche.  And of course being an action movie cliche himself, Jack has no idea; on the contrary, he keeps insisting his world is real.  This all made for an amusing, self-aware tone at a time when the action film genre was in desperate need of a shakeup.

This movie is full of fun little moments and in-jokes, like when Danny takes Jack to a video store to prove he's a fictional character played by Arnold Schwarzenegger, and the Terminator 2 standee they find depicts the T-800 played by Sylvester Stallone instead.  I also found Danny's action movie daydream version of Hamlet as played by Arnold pretty damn funny ("To be, or not to be....not to be," **Cue explosion**).  There are numerous cameos as well, like Robert Patrick as a T-1000, Sharon Stone as Catherine Trammel (from Basic Instinct), Danny Devito as an animated police cat, Ian McKellan as Death (from The Seventh Seal), and others.  LAH is full of little sight gags and Easter eggs.

The film has a lot of fun comparing what happens in movies to what would happen in the real world.  Like for example Jack Slater gets shot multiple times in his movies but escapes with barely a flesh wound, yet near the end of the film his real-world gunshot wound is actually life-threatening.  There's another moment whereupon arriving in the real world, the bad guy Mr. Benedict kills someone and then announces it for all to hear, but no one in real-world New York City cares.  In the real world evil often goes unpunished, and good guys don't always win.  It's hamfisted but it's a nice touch.

The soundtrack album was comprised almost entirely of metal songs, a rare thing in early 90s mainstream movies.  The fact that bands like Megadeth, Anthrax, Alice in Chains and Queensryche were all represented in a major Hollywood movie was so friggin' cool at the time.  17-year-old Justin bought the soundtrack on the way to the theater to see the movie.

The cold-blooded assassin Mr. Benedict is played by accomplished English actor Charles Dance, whose performance was one of the few things I liked about Alien 3.  Dance is totally compelling to watch in this film, adding both sinister believability and dry comic wit to an otherwise ridiculous bit of storytelling.  It's a shame this character wasn't in a better quality film.

It's hard to go wrong with Mercedes Ruehl, and she improves the film in some small way with what little screen time she has.  Ruehl is completely credible and likable as Danny's street-tough single mom, and again it's too bad she didn't reside in a better movie.

I said this in my Running Man piece, but regardless how one-note his performances or how intellectually devoid most of his movies were, in the late 80s/early 90s there were few actors as reliably capable of carrying a popcorn film as Arnold.  Despite an over-the-top accent and superhero build, Arnold has always been very adept at playing an everyman hero we can relate to, and thus we're emotionally invested in the story.  For the better part of a decade, Schwarzenegger movies were must-see summer fun.
﻿

Holy shit this kid's awful.  Like embarrassingly bad.  Like every time he opens his mouth I wanna crawl into a hole and die.  I'm embarrassed for him, for his fellow actors, for the crew, everyone.  I imagine that when casting this role the filmmakers must've sifted through a mountain of child actors, and seriously, this was the best they could find??  O'Brien makes Jake Lloyd's Episode I performance look transcendent by comparison.  He's evidently still working today, so I hope to Jeebus he took some acting classes in the past 25+ years.

The plot device of a glowing magic ticket is pretty hokey, even for a movie like this.  I'm not sure what would've worked better, but the gimmick plays out like a dumb children's film instead of a PG-13 action movie.  That said, once the premise is established the movie raises some interesting possibilities but sadly doesn't flesh any of them out.  The Jack Slater film doesn't seem to have much of a story for Danny to participate in, other than one of Jack's relatives gets killed and he's out for revenge.  We also don't get much of a sense of how Danny's presence changes the narrative.  Presumably the Jack Slater IV story ends with Jack killing or arresting the bad guys, so Danny's being there wouldn't really affect that outcome.  Once the characters arrive in the real world we anticipate the inevitable meeting between the real Arnie and his fictitious self, but that payoff sucks.  They have one moment together and nothing comes of it.  And as for Mr. Benedict's real world activities....

Upon crossing over to the real world Benedict discovers that a) he can commit murder without consequence, and b) he can visit movie theaters and populate the real world with their villains, thus wreaking absolute havoc.  We see him perusing movie listings in the newspaper for ideas, conjuring so many intriguing prospects.  And what does Benny do?  He brings back The Ripper, the villain from Jack Slater III, and they recreate the climax of that movie, which we've already seen.  What a horribly wasted opportunity.  Christ, bring back Dracula like you were teasing.  Go to a screening of Batman and bring back The Joker.  Ya know what would've saved this movie, if he went to see Jurassic Park and brought back a fucking T-Rex.  Then Last Action Hero would've been a monster hit!

-Upon discovering the magic ticket, Benedict delivers a long monologue directly to the camera, laying out for us his plan.  He really talks to the cheap seats too, explaining in the simplest of layman's terms.  Yeah Benny, we get it.  We've been watching this whole time.  The rules are pretty simple really.  I'm not sure why this explanation was even needed, though he does close the speech with a really cool line, "If God was a villain, he'd be me."

-I know it's supposed to be a movie within a movie, but would Jack's boss really send a 12-year-old boy out on patrol with him, especially without being able to clear it with the kid's parents?  That seems like a stretch, even for this fictional movie.

-Tom Noonan plays another creepy, crazed villain in this movie, and as usual that typecasting fits him like a glove.  But as The Ripper he seems to start almost every line of dialogue with the phrase "Ya know..."  That just bugged me.


-Given that LAH was aimed at a young audience, having Death from The Seventh Seal appear at the end was an odd choice.  I guarantee less than ten percent of ticket buyers to this film had ever seen that one.  Maybe they should've gotten Bill Sadler to reprise his role as Death from Bill & Ted's Bogus Journey.
﻿

It's a shame Last Action Hero wasn't written by more creative people, as the premise left a lot of room for smart, existential material blurring the lines between fantasy and reality.  Had say, Quentin Tarantino done a film like this it would've been pretty groundbreaking and awesome.  But instead LAH can't seem to decide if it's a typical action comedy or a philosophical study of action movies, and so it never really becomes either one.  Still it's a fairly entertaining piece of cinematic tripe that isn't anywhere near as bad as most people probably remember it.  The filmmakers' hearts were in the right place, they just failed to assemble all the intriguing pieces correctly.


That's it for this week's ASM.  Join me again next time when I'll overanalyze some other beloved crap.  Join us on Facebook, MeWe and Twitter!