AEW Double or Nothing 2020 Preview & Predictions

Welcome to another round of AEW Predictions, here at Enuffa.com! 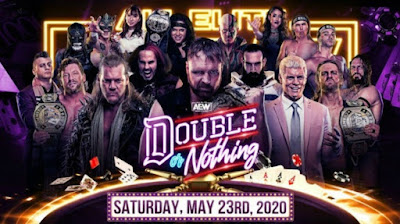 Feels like it's been ages since AEW's last PPV, but this Saturday at long last we'll be treated to the second annual Double or Nothing, albeit in front of an empty Jaguars stadium.  But AEW has adjusted to this empty arena format better than WWE has, so this show oughta be a fun little outing.  The linup feels a bit like a secondary PPV as opposed to one of their flagships, but given the circumstances I get it.  Just like they don't want to have Blood n' Guts in front of no one, it doesn't make sense to put together an absolutely loaded show when there's no live crowd.  But I think they'll do alright here.

This match is for a Tag Team Title shot, presumably on an episode of Dynamite.  So it could go either way.  The match should be a very entertaining sprint.  Private Party have gotten a title match before but I don't think Best Friends have.  I'll pick them this time. 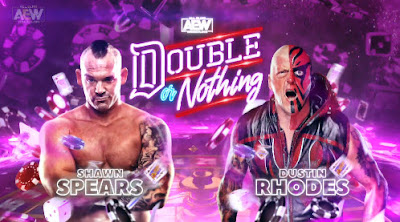 This was just added last night.  Spears failed to beat Dustin's brother last year but now's his chance for some redemption.  I see no reason not to give Spears the win here.  Dustin's 50 and won't be hurt in losing.  Spears needs to pick up some wins in order to be taken seriously. 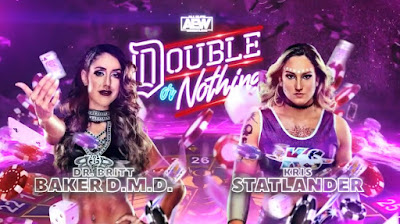 I really like Kris, and Britt is finding her groove, particularly as a heel.  This should be fun.  The company seems fully behind Baker as a rising heel star, so I have to think she wins here. 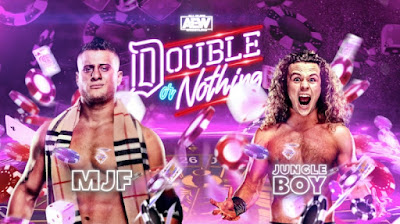 From character dynamics alone this match should be super enjoyable.  MJF is one of the best heels in the business, while Jungle Boy exudes youthful babyface charm.  I don't see this going all that long since it's mostly to build up MJF (Jungle Boy needs some wins too though), but hopefully JB gains something in the loss. 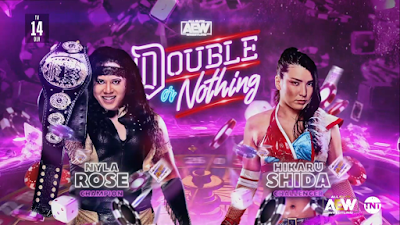 So something odd happened on Dynamite this week: they had the #1 contender for the Women's Title eat a pin in a tag match, and then had her put the champion through the table afterward, so she could stand tall at the end of the segment.  I don't get it, that's some WWE shit right there.  Felt like 50-50 booking to me.  I've been saying since this company started that Shida should be the centerpiece of the division, so I hope that's where they're going with this.  Shida has it all - the look, the natural charisma, the athletic ability.  How hasn't she been the champ yet? 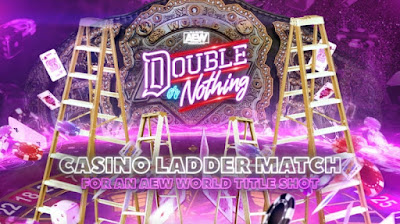 No idea who that ninth guy is gonna be.  Is Pentagon coming back?  Did they sign someone new?  Anyway this will be a highly amusing schmozz given all the talent.  A spotfest of doom.  And the rules are akin to a Royal Rumble.  Two guys start and someone new joins every 90 seconds.  Plus the match can end before everyone's in the ring, which is odd.  I don't see them doing that though.  How pissed would everyone be if it ended in the first 90 seconds?  Allin, Cassidy and Fenix will be the standouts I predict.  If there weren't a surprise entrant I'd go with Allin to win this and get the title match.  But surprise guests basically always win so I'll pick him. 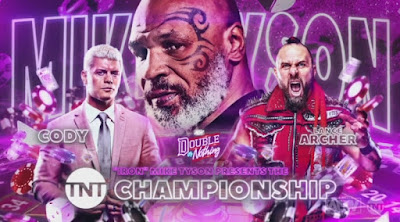 Another match that should be high quality.  Cody's been on fire lately as an old-school, no-frills babyface, and Lance Archer is peaking at 41 as a monster heel.  I dig it.  Archer basically has to win this.  It's his first big match in the company and Cody should chase him for a little while before eventually winning his first company championship.  Also apparently Mike Tyson is presenting the belt?

This will be another fun-as-fuck schmozz, where falls count anywhere in the empty stadium.  It's not Blood n' Guts, but it's a nice teaser of that eventual match.  It makes sense for The Inner Circle to win this round to set up the BNG match in a few months.  That's traditional booking.  But I could see Team Elite winning too.  I wonder if Dash & Dawson show up to throw a wrench into the works.  If so, you'd have to pick Inner Circle.

Pick: I'll go with the bad guys here to give the babyfaces more motivation in the rematch 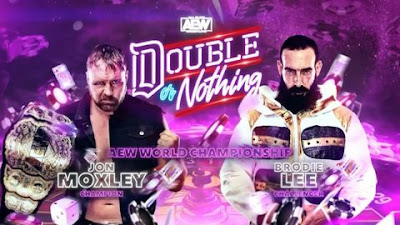 It's The Shield vs. The Wyatt Family all over again!  Not really, but it's crazy how things have changed over six years.  This'll be Brodie's first real test post-WWE and it'll be interesting to see what he brings to the table in-ring without Vince's overproduced style.  I always considered him the best of the Wyatts between the ropes, and it wasn't even close.  Obviously there's no suspense over the result; Moxley's not losing the title anytime soon, nor should he.  But the match should be pretty strong.


There's the lineup for the first AEW COVID PPV.  Despite the lack of crowd I'm really looking forward to it.  WrestleMania was the last PPV I watched, and I dropped the WWE Network immediately after that.  So this will be refreshing.  Enjoy!

Posted by Justin Enuffa Ballard at 9:51 AM