AEW delivered big again.  Double or Nothing 2020, while probably not their best PPV to date (I think Revolution is still their yardstick), was nonetheless an incredibly entertaining show full of great energy, some damn fine wrestling, and one of the most purely fun main events I've ever seen.  The eight-match card flew by, numerous bouts landing within or near **** range, the company showcasing some of their young talent and even protecting most of the match losers.  AEW once again worked beautifully around the empty arena problem, seating wrestlers and crew around the ring to make noise, and mixing the audio so the "crowd" was louder than the in-ring action.  Thus the absence of an arena full of fans was barely noticeable.  Aside from one match/result I have a gripe about, I loved this show. 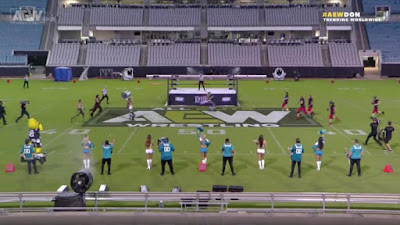 The PPV kicked off with the Casino Ladder Match, structured like a cross between a Royal Rumble and Money in the Bank.  SCU buddies Frankie Kazarian and Scorpio Sky drew the first two numbers and had some fun exchanges before Kip Sabian entered with sidekick Jimmy Havoc, who interfered liberally on his behalf.  Next was Darby Allin, who had an insane spot off a ladder with his skateboard.  Orange Cassidy was fifth and asked for clarification on the rules, selling annoyance when told he'd have to climb a ladder.  Colt Cabana was sixth, Joey Janela (subbing for the injured Fenix) was seventh.  Janela did a few crazy things, like hitting a Death Valley Driver on one of the giant poker chips.  Luchasaurus was eighth and ran wild on everyone before the ninth and final entrant, mystery competitor Brian Cage.  At first everyone ganged up on Cage and buried him under a pile of ladders and poker chips, but he eventually shook it off, had a nice big man exchange with Luchasaurus, and finally press-slammed a ladder with Darby on top of it, over the ropes to the floor.  Cage then climbed up and retrieved the prize poker chip to win.  This was a great debut for Cage, who looked like a monster, but also allowed Allin, Janela and others time to shine.  The plan is for Cage to challenge Jon Moxley at Fyter Fest.  A very fun ladder schmozz with some good character moments.  ***1/2

Next up was the best straight-up wrestling match of the night, on a card with a lot of car wreck matches.  MJF and Jungle Boy proved why they're two of the most promising young talents in the business.  This had a fantastic gallant babyface vs. douchebag heel dynamic, with MJF antagonizing and mocking JB early on and even faking an injury at one point to get in a cheapshot.  Jungle Boy matched MJF hold-for-hold in the opening minutes, and these two strung together some really nice grappling.  Finally MJF took over, going after Jungle Boy's arm, which later paid off when JB tried to slap on a submission hold but couldn't.  The most memorable spot of the match came very late when JB hit a reverse rana on the apron that looked like it killed MJF.  But since MJF was on the floor, Jungle Boy couldn't pin him, having to roll him back in and give him time to recover.  The finish came after a series of cradle reversals, and MJF scored a European Clutch to "steal" the win.  This was pretty great and I hope this becomes a perennial feud.  Their chemistry together is palpable and they can help each other grow into big-time stars.  MJF winning this time was the right move as he's clearly being groomed for a major push.  That said, Jungle Boy needs to rack up some wins so people don't forget about him.  ****
The third match was for the new TNT Championship (the title belt is unfortunately not finished due to COVID-related delays), pitting Cody against Lance Archer, with Mike Tyson at ringside to present the belt.  This was another clear babyface vs. heel dynamic, which was hurt slightly by the absence of a proper audience.  Cody is so over that his matches gain a good half-star just from the crowd reaction.  But this was very well worked, with Archer dominating probably 80% of it.  Archer is maybe the best big man in the business right now and he got to showcase all his stuff, looking unbeatable even in a loss.  Cody at one point hit a DDT just to throw it in Jake Roberts' face, but Lance came right back with a spinebuster directed at Arn Anderson.  Late in the match Anderson tripped up Archer on the top rope, prompting an ejection, but the referee also decided to toss Jake, who came back moments later with his snake bag.  But Tyson was there to run interference.  Cody then countered Archer's Blackout with a pair of CrossRhodes to win the match and the title.  This was very good but perhaps a little long since there was no crowd.  The exact same match in front of 10,000 people might've hit four-star territory.  Alas, this one gets ***1/2.

The next two matches were the only throwaways on the show, starting with a fairly short Kris Statlander vs. Penelope Ford bout.  Ford subbed for the injured Britt Baker and put in a respectable showing, albeit with a few timing issues.  Ford definitely has potential though and just needs some seasoning.  Statlander is one of my favorite up-and-comers in the company, with great athletics and a quirky (if a bit silly) gimmick.  This was fine but not PPV-quality.  **1/4

The other short match really didn't belong on this show as-is.  Shawn Spears came out for his match with Dustin Rhodes dressed in a suit, took the mic and claimed Dustin wasn't there and he should win by countout.  Dustin's music hit and Shawn was shocked, but then revealed it was his idea.  Aubrey Edwards began counting again and Dustin's music hit for real this time.  Dustin appeared behind Spears and proceeded to kick his ass, yanking off the suit and stripping Shawn down to his skivvies (which oddly bore a picture of Tully Blanchard on them).  Dustin pretty much took this whole match, finishing Spears with his twisting suplex.  Spears really needed a win here, and on a show where the babyfaces took all but two matches they could've given it to him.  As it stands he's not much better off than he was in WWE.  *

Things got back on track with a strong Women's Championship match pitting Nyla Rose against underdog babyface Hikaru Shida.  Shida, usually full of smiles, was deadly serious in this match, selling the uphill battle she had to face.  Nyla controlled the early parts of the match but Shida refused to stay down, using Nyla's kendo stick against her on several occasions.  The finish came after a series of running knees and a brutal kendo stick shot to the head, and Hikaru Shida is your new AEW Women's Champion.  Shida sold this emotional moment wonderfully and it was implied she was fighting for her fallen friend Hana Kimura.  I've been saying from the beginning that Shida has "flagbearer" all over her, and I'm very pleased she's finally the champ.  She should hold that title for a solid year to really establish both herself and the championship.  Good stuff.  ***1/4

Another wild title match took the semi-main event slot, as Jon Moxley and Brodie Lee beat the snot out of each other, all over ringside.  These guys went through tables and poker chips, each hit suicide dives to the outside, and the big spot of the match was Moxley hitting Paradigm Shift on the ramp, which collapse under them.  Brodie came up bleeding from the head, Moxley brought him back into the ring and hit another double-arm DDT.  But Lee kicked out at one.  Moxley hit Paradigm Shift and Lee kicked out at two.  Moxley snared a rear naked choke and Lee passed out.  There was obviously no way Lee was winning here, but they did a good job of protecting him with the two kickouts and no actual submission.  Both guys are great at crazy no-rules brawling, and that came across here.  ****

Now for that main event.  Holy shit this was fun.  The Stadium Stampede is a unique match AEW can point to as a signature gimmick, and fans will clamor for this to be an ongoing tradition.  The Inner Circle and The Elite made NFL-style entrances and charged each other on the field.  All hell broke loose until Hangman Page made his delayed entrance on a horse, chasing Sammy Guevara all the way down the field and into the building.  The action made its way into the ring and everyone did some spot wrestling.  But after a few minutes they spilled outside again and split up into individual fights.  Matt Jackson hit a moonsault off the uprights onto Sammy and Jericho.  Santana and Ortiz powerbombed Kenny Omega through a barricade bridged across two tables and then attacked Matt Hardy.  They tossed him into a pool and held him underwater, but Matt transformed into Hardy Boyz Matt and then Mattitude V1, before taking over.  He duct taped Ortiz to a chair of wheels and locked Santana in an ice machine to incapacitate both of them.  Elsewhere Jake Hager found Hangman Page in the stadium bar and they shared a shot of whiskey before having a great barroom brawl.  Hager hit a urinage on a pool table and then rammed Page all the way down the bar, crashing through glasses and bottles.  Kenny then made the save and the tag champs took turns smashing bottles over Hager's head before hitting a V-Trigger/Buckshot combo and sharing a drink themselves (Kenny drank milk).  Back on the field, Matt Jackson started a series of Northern Lights suplexes on Sammy, while Jericho and Nick brawled across the gridiron.  Jericho finally hit Nick with his baseball bat and went for a pin but only got two.  Jericho then threw a challenge flag and demanded Aubrey take him to the replay booth (absolutely hilarious).  When the ruling on the field stood, Jericho called her a "shitty referee."  Meanwhile Matt's suplex series reached all the way across the field, so Matt spiked Sammy's head into the grass and did an end zone dance.  Referee Rick Knox penalized him for excessive celebrating and Matt superkicked him.  The Bucks double teamed Jericho and Nick hit him with a splash off the loge seating, through a table.  That left just Sammy, awoken by the sprinkler system.  Matt Hardy and Kenny Omega chased him in a golf cart, and Sammy ran up into the stands.  Matt Hardy's new drone NEO1 distracted Sammy long enough for Kenny to hit a V-Trigger, and then came the damnedest spot of the match, as Kenny hit a One-Winged Angel from the stands down to a crash pad on the floor to win the match.  I loved this.  Absolutely loved it.  It had action, high spots, comedy, excitement, everything you could've wanted out of a match like this.  This is how you do "cinematic" matches.  Present them as though they're happening in real time, with maybe a tongue-in-cheek bit like the Matt Hardy transformations.  But otherwise it played out like a live Falls Count Anywhere match.  It was 34 minutes and felt like 20.  *****

AEW continues to make North American wrestling fun again.  Their product is a great mix of serious action sprinkled with effortless comedy, and a blend of established and new stars.  Despite these strange times they managed to pull off a great empty-arena PPV.  Watch this show.