Hey there everyone.  Welcome to Enuffa.com, your home for pro wrestling, movies, music, and other life-altering forms of pop culture.  I know what you're thinking.  You're thinking, "Hey Justin, it's been a while since you posted the complete history of a beloved wrestling supercard.  Can ya help us out?"  You my friends are in luck, because without further ado, I'd like to present.....

That's right, it's time to hop into the ol' DeLorean and travel back to 1983, when Jim Crockett Promotions envisioned a wrestling event so magnanimous it couldn't be just for the live crowd in attendance.  It had to be broadcast on closed-circuit television throughout the South!  Big wrestling events on Thanksgiving night had long been a tradition in the region, and Crockett correctly surmised that a supercard held on that date would draw big business.  Starrcade '83 is the real Granddaddy of Them All - the first wrestling event broadcast on closed-circuit, and the prototype for the modern PPV event.  The show was a tremendous success, famously causing massive traffic jams in downtown Greensboro, and JCP made Starrcade an annual tradition.  Quickly it became the promotion's flagship event, and by 1987 it was also carried on pay-per-view.  When Ted Turner bought out Jim Crockett in 1988 he kept the Starrcade brand but moved it to December to avoid having to compete with the WWF's Survivor Series, and that's where it stayed until WCW folded in 2001.

So let's look at the highs, lows and everything in between, of Starrcade!


The inaugural Starrcade was by today's standards a very barebones production which featured quite a few obscure names from the early part of the decade.  It was a very uneven show with a pretty forgettable first half.  But it's the final three matches that make Starrcade '83, and they're all first-rate classics of the era.

The NWA event lineups back then were different from the WWF approach, in that they stuck all the undercard bouts early on the card and saved the important ones for the second half - quite often the last four matches would all be for championships.  By contrast Vince would spread the big matches around to give each show peaks and valleys, often inserting "buffer matches" between some of the headliners.  There are pros and cons to both philosopies of course.

After three matches that could be considered throwaways (The Assassins vs. Rufus Jones & Bugsy McGraw; Kevin Sullivan & Mark Lewin vs. Scott McGhee & Johnny Weaver; and a brief Abdullah the Butcher-Carlos Colon showdown), the show began for real with a solid tag match: Bob Orton (Randy's dad) teamed with Dick Slater against Mark Youngblood and Wahoo McDaniel.  This was no five-star classic, but it was easily the best match thus far.

Next was a TV Title vs. Mask match between The Great Kabuki and Charlie Brown (actually the "suspended" Jimmy Valiant under a mask).  I've never been much of a Valiant fan, so for me there wasn't much to this, but it does stand as the first-ever championship match on a Starrcade show.
From here on out the show was pure gold.


The sixth match of the night saw Roddy Piper and US Champion Greg Valentine each have a dog collar buckled around their necks with a chain binding them together.  What transpired next was an incredibly brutal fight in which both men bled profusely and created inventively violent ways to use the steel chain as a weapon.  After sixteen grueling minutes Piper won by hammering Valentine with clubbing blows and simply climbing on top, wrapping Valentine's legs with the chain.  Valentine attacked Piper after the bell, continuing the violence.

Next up was the Tag Team Championship, as Jack and Jerry Brisco defended against Ricky Steamboat and Jay Youngblood.  This was a lean, thirteen-minute back-and-forth battle, with the babyface team winning back the Titles after Steamboat dropped Youngblood onto Jerry for the a splash, and the pinfall.  Like Valentine, the Briscos were sore losers and attacked the babyfaces after their loss, but Steamboat and Youngblood rallied and chased them off.

The match Starrcade '83 is most remembered for is of course the Steel Cage World Title match between Harley Race and Ric Flair.  Race had defeated Flair five months earlier through nefarious means, and then placed a $25,000 bounty on Flair's head, offered to anyone who could put him out of action.  Bob Orton and Dick Slater obliged with a spike piledriver, and it seemed like Flair's career was over until his surprise return a few months later.  The babyface challenger vowed revenge at Starrcade, and after a bloody 24-minute war Flair took back the Championship with a top-rope cross-body (You read that right, Ric Flair actually connected with a top-rope move).  This match would likely come across as plodding and stilted to today's young wrestling fans, but it holds up for me as one of the last great examples of 70s southern-style wrestling.  These two future Hall of Famers told a basic but compelling story and it culminated in one of the illustrious moments in Flair's career. 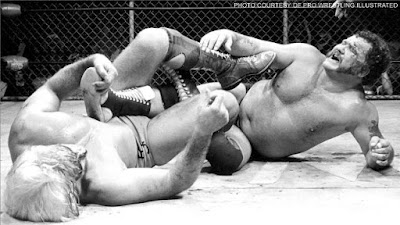 Starrcade '83 was most definitely of another era, where the product was simple and rugged, and heroes and villains adhered to old-fashioned archetypes.  But I still find it a fascinating time capsule and a tremendously enjoyable old-school event full of positive intangibles.

Best Match: Harley Race vs. Ric Flair
Worst Match: Abdullah vs. Carlos Colon
What I'd Change: Tough to say since it was before my time really, but I'd maybe spread out the top matches a little so the show quality feels a bit more even.
Most Disappointing Match: Abdullah vs. Colon - These two had a legendarily violent feud over the decades but this clearly wasn't one of their standouts.
Most Pleasant Surprise: Probably Orton & Slater vs. Youngblood & McDaniel
Overall Rating: 8/10


Posted by Justin Enuffa Ballard at 8:34 AM