We've arrived at the start of the Monday Night War!


Hulk Hogan's shadow was temporarily lifted from WCW in late 1995 due to a kayfabe suspension, so the focus for this show was on in-ring wrestling and several homegrown WCW stars.  WCW once again went back to a standalone tournament-type format for Starrcade - this time it was a WCW vs. New Japan series of matches with the winning team earning a World Cup trophy, which in the long run meant absolutely zero.  Despite WCW putting together a team of both babyfaces and heels, their guys were all greeted as heroes by the Nashville crowd.  Aside from the tourney there would also be a Triangle match to determine a number-one contender to Randy Savage's WCW World Title in the main event.  Two of those contenders and Savage himself were also in the New Japan series, which was just strange.  But unlike say Starrcade '91, this show at least had a handful of memorable bouts, even if the tourney concept was once again pointless in the grand scheme.

Bobby Heenan was great as usual on color commentary but unfortunately had to compete with Dusty Rhodes, who I've always found insufferable as an announcer.  He probably took up about half the talking time of the three-man team and most of his comments were incomprehensible.  So that was quite distracting.

The WCW-NJPW series kicked off with a pretty great on-paper match: Chris Benoit vs. Jushin Thunder Liger.  This did its job as an opener but was frankly a little underwhelming given the talent involved.  I imagine their matches in Japan blew this one out of the water.  Kevin Sullivan ran down to distract Benoit (thus ruining the ending) and Liger executed a really bad hurricanrana and hooked Benoit's legs for the pin.  Not nearly as good as you'd think.

On the flipside though, Alex Wright vs. Koji Kanemoto was a shockingly good followup; better than the opener and with a nice fluid feel to it.  They got almost twelve minutes and did a lot with them.  This match felt almost like a lighter, less stiff version of a New Japan match.

The first throwaway was next as Lex Luger wrestled Masahiro Chono.  Not much to this one but at least it was short.  Chono dominated most of the match, even slapping on his STF finisher, but Luger made it to the ropes and mounted the shortest comeback ever before applying the Torture Rack for the win.
Another decent little match followed, as Johnny B. Badd faced Mr. Saito.  This was essentially a short New Japan-style match with some good chop battles in the middle.  Pretty fast-paced overall and both guys did what they could with just under six minutes.  The finish was pretty anticlimactic, as Sonny Onoo distracted the official on the apron, Badd went after him, and Saito just dumped Badd over the top rope and got disqualified.  I guess the story was that he was used to over-the-top throws being legal in New Japan. 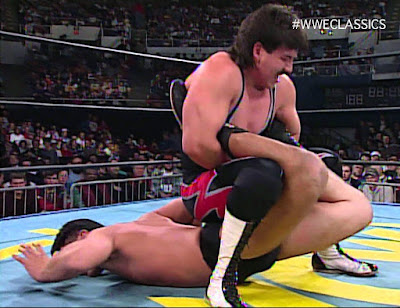 The show stealer, and the one match from this show to make WWE's Best of Starrcade DVD, was Eddy Guerrero vs. Shinjiro Otani, in one of the better thirteen-minute matches you're likely to see.  This contained not an ounce of fat and was replete with athletic, innovative stuff.  Otani got the win after a series of pin reversals.  Pretty excellent little bout.

WCW trailed 3-2 going into the Randy Savage vs. Hiroyoshi Tenzan match.  Again, I'm not sure why the WCW Champion would take part in this tourney when he was scheduled to defened the Title later on.  Another pretty forgettable six-minute match capped off by the Macho Man elbow off the top (which by 1995 looked far less impressive than it did in 1988).  This wasn't bad but it also wasn't memorable at all.

The World Cup final pitted Sting vs. Kensuke Sasake.  As six-minute matches go, this had a lot of good action and urgency, but being the deciding World Cup match it seems very odd to only give it six or so minutes.  There wasn't much time to build suspense over who would come out victorious.  Tony Shiavone did a good job at the end acting excited for WCW's moment of triumph, but this wasn't much of a payoff to an angle that struggled to convey much purpose in the first place.  The trophy ceremony immediately followed this match, and then Sting went to the back only to return moments later for the Triangle match.  Where were Arn Anderson and Brian Pillman for this tournament?  Couldn't Sting, Savage and Luger have sat this out since they had bigger fish to fry?

The semi-main event (and as it turned out the show's centerpiece) was Ric Flair vs. Sting vs. Lex Luger in a Triangle Match for an immediate World Title shot.  The Triangle Match rules were a little awkward; two guys would fight while the third stood on the apron waiting to tag in.  This match was pretty well-worked but went waaaay too long; 28 minutes was not necessary when 20 would've sufficed.  The three guys all had chemistry though, having wrestled each other numerous times before.  The booking of the finish didn't make much sense, as Flair took advantage of a ref bump to clip Luger's knee while Luger had Sting in the Torture Rack.  Luger fell out of the ring and Flair threw Sting over the ropes, then woke the referee up and urged him to count them both out.  This begged a couple questions, 1) Why would you have a countout in a three-way match?  If one guy gets counted out, then what happens? 2) Luger stopped Sting from climbing back in at the last second.  Why would he do this?  I'd have assumed if Sting got back in the match would continue, but then they never made it clear what the rules were regarding countouts or disqualifications.  Anyway this was fun just to see Flair, Luger and Sting in the same match but was not the great main event it could've been with more focused, decisive booking.


Almost an afterthought by this point, the main event was WCW Champion Randy Savage vs. Ric Flair.  Like the World Cup final match, this was quite scant for a match of such importance.  Flair and Savage delivered a classic at WrestleMania VIII but this was nowhere near that level.  The action was pretty furious but never fully got going.  Toward the end Savage blocked Flair's attempt to use Jimmy Hart's megaphone and used it himself.  Flair bladed like crazy, gushing blood all over the place, and Savage hit the flying elbow only for the new Horsemen to break up the pin and cost Savage the match.  Considering the legendary wrestlers involved this was pretty lackluster and overly brief.  I did like the Horsemen lineup of Flair, Anderson, Pillman and Benoit.  Too bad Pillman left so soon after.

Starrcade '95 was another one of those PPVs where there wasn't anything bad, but there wasn't anything truly great either, and the show meant very little in the end.  Aside from the WCW Title change nothing of note happened here.  The WCW vs. NJPW series looked intriguing on paper but after it was over the New Japan guys went home and no feuds were advanced or settled.  Once again WCW attempted to shoehorn a high-concept tournament into their biggest show of the year, negating its importance.  Flair vs. Luger vs. Sting should've taken place halfway through the show, on a card stacked with important matches, and the WCW Title match should've gone at least 15 minutes.  I'm not sure how you justify a PPV main event running less than twelve or so.  Definitely a middle-of-the-road show overall.

Best Match: Eddy Guerrero vs. Shinjiro Otani
Worst Match: Lex Luger vs. Masahiro Chono
What I'd Change: I hate to sound like a broken record, but for fuck's sake why did Starrcade need to be a showcase for whatever experimental nonsense format popped into the bookers' heads that week?  The flagship PPV should be the show where feuds are settled and stars are made, not where a bunch of talent gets thrown into some weird tournament for a prize that will quickly be forgotten about.
Most Disappointing Match: Chris Benoit vs. Jushin Liger
Most Pleasant Surprise: Alex Wright vs. Koji Kanemoto
Overall Rating: 6.5/10