Welcome to another edition of Top Ten Things here at Enuffa.com, where I count down the ten best (or worst) items pertaining to something-or-other....

Today I'm talking about what used to be, for me growing up at least, the greatest wrestling show on television, Saturday Night's Main Event.  For those not familiar with the show (I'm not sure I wanna know you), Saturday Night's Main Event aired a few times a year on NBC during Saturday Night Live's timeslot and usually featured four or five matches taped a few weeks earlier.  This was back when you almost never saw real matches on free television, as the weekly shows generally consisted of quick squash matches designed to draw ticket buyers to local house shows.  But every couple months we were treated to a handful of competitive bouts between top stars, and it was EVENT VIEWING.  As a 12-year-old who never got to see the PPVs until they were available on VHS, seeing Hulk Hogan or Randy Savage or The Ultimate Warrior wrestle a match on free TV was the most monumental thing happening that month.

The show's initial run ended in '92 (following a one-year move from NBC to Fox) before it resurfaced in 2006-07.  Unfortunately by that time the magic was gone, as fans had long been accustomed to seeing big free TV matches every week on RAW and Smackdown.  SNME was clearly a pre-Monday Night War phenomenon and couldn't work in the modern era.  But at the time of its original run it was truly a delight.

Here now are the ten greatest matches in the history of this fantastic show. (Note: for the purposes of this column I've included the air date as opposed to the taping date)

Hogan's first televised WWF Title defense after WrestleMania V was against his old foe The Big Bossman, in a steel cage no less.  At the time I had jumped off the Hogan bandwagon, siding with Randy Savage in the MegaPowers split.  Thus I wasn't terribly excited about this match going in, nor did I care for Hogan's No Holds Barred nemesis Zeus being integrated into WWF storylines.  Zeus attacked Hogan prior to this match to add a little suspense, but it was obvious Bossman wasn't winning the belt here.  However the match itself turned out to be a very entertaining cage brawl, the highlight of which was Hogan suplexing Bossman off the top of the steel structure.  In 1989 that spot was one of the most death-defying things I had ever seen, and it made this a very memorable bout. 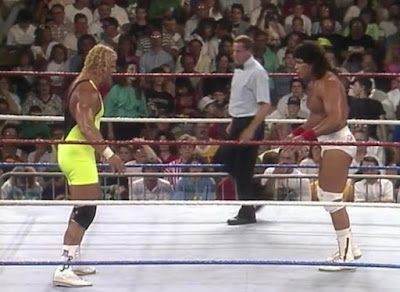 On a stacked SNME episode that featured three Title matches, what seemed like a throwaway Intercontinental defense turned out to be a very well-worked, show-stealing match.  This aired a month before Summerslam, and oddly they gave away the scheduled Warrior-Rude PPV main event on this show for free (I know the SS match was in a cage, but still).  So there wasn't much suspense there, and even less in the Tag Team Title match, as Demolition (scheduled to face the Hart Foundation at the PPV) defended against The Rockers here.  But Mr. Perfect, whose Summerslam opponent was up in the air following Brutus Beefcake's infamous parasailing accident, would face the man he defeated to win the vacant I-C Title that April, Tito Santana.  At the time I feared Perfect would drop the Title here, setting up a rematch at the PPV, but with some help from Bobby Heenan ("He's gotta beat you!  You don't hafta beat him!") on the outside, Perfect delivered a successful and enjoyable Title defense. 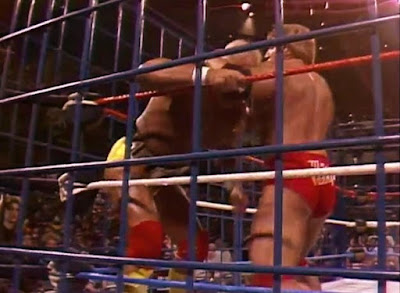 At the time this was one of the WWF's biggest televised matches, being the blowoff for the legendary Hogan-Orndorff feud which lasted through most of 1986.  It was also the first steel cage match ever shown on free WWF television, and therefore felt like a huge deal.  While this doesn't get a lot of points for technique, it was a pretty good brawl that led to a false ending, when both men escaped the cage simultaneously.  As I recall this was the first time I ever saw such a scenario, where two different referees declared opposing winners.  The show broke for a commercial and when it resumed the match had been restarted.  This of course led to Hogan getting the clear victory, settling this rivalry and freeing the Champion up for his impending feud with Andre the Giant. 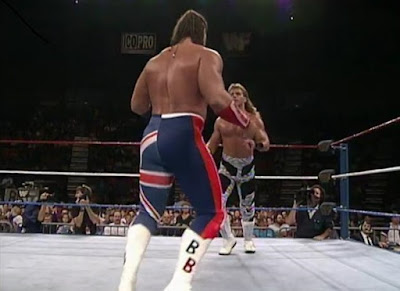 The Heartbreak Kid's rise to singles success can largely be traced back to this match.  He had turned heel ten months earlier but hadn't figured into many major feuds yet, except as an early foil for then-I-C Champion Bret Hart.  But at Summerslam '92 Bret dropped that Title to Davey Boy Smith and soon after became the WWF Champion.  Behind the scenes the WWF was embroiled in steroid abuse allegations, and started clearing their roster of anyone who looked chemically-enhanced, including Davey.  The new focus was on smaller, more athletic wrestlers to give the company a more legit image, and one of the first big steps was for Davey to drop the I-C Title to the slender Michaels.  The match was quite good, as these two always had strong chemistry.  Shawn won by countering a superplex attempt for the pin, and thus began his first big singles push.  Only eleven days after this aired he main evented Survivor Series against Bret, in another excellent showing. 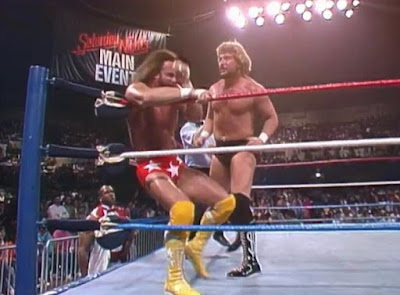 In another case of a major PPV main event occurring on free TV just weeks earlier (To be fair it wasn't publicly known this would be the WrestleMania IV main event), these two top contenders for the vacant WWF Title faced off in a pretty great SNME match.  Savage was positioned as an underdog who repeatedly had to contend with Dibiase's entourage interfering in the match, and after a countout loss and post-match beatdown, Elizabeth would once again call to Hulk Hogan for assistance.  This would of course foreshadow Hogan's assist in Savage winning the 'Mania 4 main event (which I always thought was a mistake but that's an argument for another time).  Savage was growing as a top babyface character, and this match nicely set up his near-impossible WrestleMania quest to become the WWF Champion. 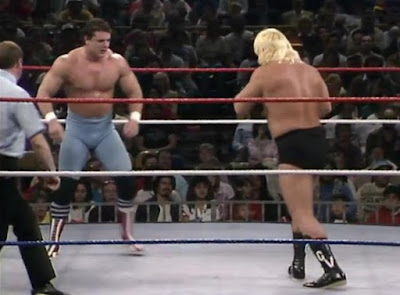 Once again the WWF gave away a major PPV match just before the PPV; this time it was Greg Valentine and Brutus Beefcake defending the Tag Team Championship against Cinderella babyface team The British Bulldogs.  Interestingly though, this match was actually better in my opinion than their WrestleMania 2 clash, as it featured more back and forth action and had a proper third act.  The Bulldogs came up short here but of course won the straps at the PPV. 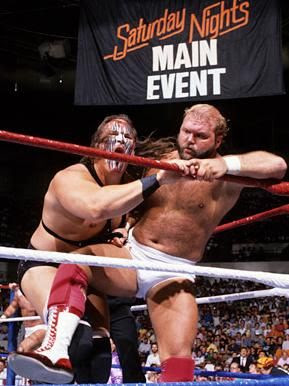 The first-ever title change on a SNME episode took place in my neck of the woods, as Demolition faced Arn Anderson & Tully Blanchard in a two-out-of-three falls match at the Worcester Centrum.  Reminiscent of Arn and Tully's battles with The Road Warriors, the first fall mostly consisted of Demolition dominating the heels with their size and power, and they won the fall pretty handily.  In the second fall though, Ax and Smash got carried away and were disqualified for excessive double-teaming.  The third fall was where this match kicked into high gear, with quick, abrasive back-and-forth action.  During the melee Andre the Giant, who had shown up at ringside, slid a chair into the ring, which the Busters used to score the dastardly upset win.  I was in attendance for this taping and while I was outraged at the time, this match still holds up for me as one of Demolition's best. 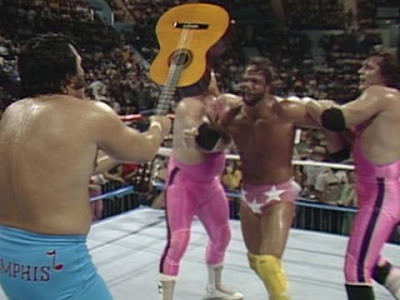 This match is remembered mostly for its aftermath, as the in-ring action itself was fine but not groundbreaking.  Savage was in the midst of a slow babyface turn after losing the Intercontinental Title to Ricky Steamboat, who then dropped the belt in controversial fashion to The Honky Tonk Man.  HTM then took to calling himself the greatest I-C Champion of all-time (despite usually retaining the strap via countout or disqualification loss) which raised the ire of the Macho Man.  Savage challenged HTM for the belt, and dominated the match, landing the flying elbowsmash before Bret Hart interfered to save HTM's Title.  What followed was the stuff of WWF legend.  HTM and the Hart Foundation triple-teamed Savage, prompting Elizabeth to run to the back for help.  After Savage took a vicious guitar shot to the head, Elizabeth reappeared with none other than Hulk Hogan!  Hogan and Savage cleared the ring only to bump into each other and tease fisticuffs of their own.  But Savage held out his hand in friendship, and the crowd exploded as Hogan shook it, thus forming the MegaPowers.  Like I said, the match was just pretty good, but the angle that followed was mindblowing in 1987. 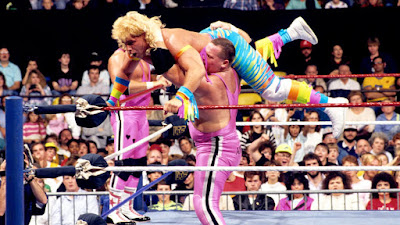 Rather a forgotten gem, this unusual matchup of two babyface teams occurred at a time when there were no strong heel tandems in the company.  The Hart Foundation looked to be returning to their rulebreaking roots, playing the gritty foils to the white meat Rockers.  The winners would be positioned to challenge Tag Champs Demolition.  This match was a masterful display of chain wrestling which featured two future Hall of Famers, that eventually broke down into a no-contest when Demolition appeared at ringside and got involved in the proceedings.  In a very weak in-ring year for the WWF, this match was one of the highlights.  Soon after this match Ax took a reduced  role due to nagging injuries, and Demolition introduced third member Crush, turning heel and keeping the Harts as their top babyface challengers. 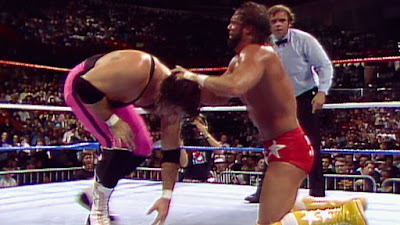 How this match only took place once in the WWF is beyond me.  In late November 1987, the company's two best workers faced off in a surefire Match of the Year contender.  Evidently Savage and Bret had a totally different, more elaborate match planned, but Vince wanted this to feature more of a story so they had to ad lib most of it.  This turned out an excellent bout though, where Bret worked Savage's ankle to the point that Savage had to remove one of his boots and finish the match on one foot.  Couple that with repeated interference by Jimmy Hart and Jim Neidhart, and Savage had a huge uphill battle.  But in the end Savage took the win with a quick small package to close out one of the WWF's best matches of 1987.  I still consider it money left on the table that Savage and Bret never wrestled each other again in the WWF, and only once in WCW.  This could've been a huge, perennial rivalry that yielded several classics.

Posted by Justin Enuffa Ballard at 8:39 AM